The Lafayette Parish School Board allocated $1.5 million Tuesday toward providing short-term internet connectivity solutions for students without internet access as part of a public-private partnership with local philanthropists and businesses.

The board members voted 5-1 on two items: to transfer $615,000 from the Capital Projects Reserve for 2021-22 projects to help resolve internet connectivity issues and to amend the Special Revenue Fund budget to recognize $1.25 million in federal coronavirus aid money. The funding included $429,047 from the Elementary and Secondary School Emergency Relief Fund and $823,406 from the Governor’s Emergency Education Relief Fund.

The board agreed to combine the $615,000 from the Capital Projects Reserve with an estimated $345,000 from the ESSER Fund and $540,000 from the GEER Fund to meet students’ internet needs through Link and Learn, a partnership with Love Our Schools.

Access to home internet will be critical in the coming months as students prepare to return to school Sept. 8 on a hybrid schedule, with two to three days spent in the classroom and the remainder spent learning at home using digital resources. The district has also warned that families should be prepared to transition to a fully virtual plan at a moment’s notice if coronavirus cases surge and the state must revert to a Phase 1 reopening plan.

Ryan Domengeaux, CEO of the William C. Schumacher Family Foundation, said the new Link and Learn initiative is focused on a diversified approach to short-term internet solutions including Wi-Fi hot spots for transient or homeless students, Wi-Fi enabled buses that can be deployed in communities, increasing Wi-Fi reach at school sites and partnering with businesses to make their internet accessible to students in need.

He estimated 7,000 Lafayette students in roughly 5,000 households are without home internet access, numbers based on a spring survey the school system conducted of its student population, district spokesperson Allison Dickerson said.

The Lafayette Parish School System announced Tuesday night that it will delay the start of school until after Labor Day.

Domengeaux said he, Todd Mouton with the Pugh Family Foundation and Anna Osland with One Acadiana have coordinated with the school system, internet service providers LUS Fiber, Cox and AT&T, and roughly 30 to 40 community and business partners in the past two months on the initiative.

“We worked really hard with the school district to be able to come to this point in our community where we can say we did something tonight that is so innovative that others will look to us as leaders in our community, in our region and in the state,” Domengeaux said.

Before Tuesday’s announcement, the Link and Learn initiative brokered agreements for low-cost internet options for families starting at $10 a month through LUS Fiber, Cox and AT&T. Each company has its own qualification process to determine who can purchase the service.

After Tuesday’s board meeting, they’re planning to bring home internet a step further by covering the cost of internet service for low-income families. Domengeaux said he believes within 60 days they can extend Wi-Fi services to needy families, operating off the 5,000 households estimate. Until then, they'll rely on hot spots, the Wi-Fi-enabled buses and other avenues to provide internet connections.

Exact specifications for which families will qualify to have district-supported internet were not available Tuesday.

The district-sponsored internet will be filtered, so students will only be able to access websites and online materials for learning purposes. It’ll be like accessing the internet at a school site, he said.

“The idea is we’re not providing resources for parents to get on and surf on the internet and use Netflix or take the services away from the children. This is us providing a hand up on a short-term basis so children can access technology just like any other kid can access technology and the internet throughout the school district,” Domengeaux said.

The activity limitations were laid out in an opinion from Attorney General Jeff Landry dated July 30. The opinion said there’s legitimate reason to provide internet connectivity for students under certain parameters while the school system is requiring at-home, online learning, but device-based and internet provider limits must be established to filter the content being accessed.

The opinion was requested by the school board in an 8-0 vote at the July 22 board meeting. The opinion paved the way for the school system to devote funds to student internet access.

“The State has an interest in providing learning environments and experiences that are humane, just and designed to promote excellence in order that every individual may be afforded an equal opportunity to develop to his full potential,” the Landry opinion said.

“Providing Wi-Fi access to these students for the time period that the School Board has determined that it is necessary or advisable for students to receive online education during the period of the emergency is rationally related to the State’s interest in providing students this equal opportunity,” the document said.

The second thrust of Link and Learn’s mission is to build a long-term solution to affordable internet access for students. Domengeaux said the Love Our Schools team is working with partners like Infolink, a telecommunications solutions company, to build a 4G/5G Wi-Fi overlay network that will be broadly accessible and allow access to filtered internet service for academic work.

The Love Our Schools partners have put forward $400,000 in seed money to pilot the network in the 70501 Zip code, which covers north Lafayette roughly from University Avenue north to Interstate 10, west to the Vermilion River and south to Lafayette Regional Airport. Domengeaux said the goal is to have the initial overlay network operating by Christmas.

If successful, they’ll help the school system devise a funding scheme to extend the network across the parish.

“In 24 months, we can probably say we’re one of the first communities, certainly one of the first school districts in the country, where a child can walk out from their home in the middle of a cane field with an attachment to their iPad and connect to free Wi-Fi to get academic learning,” Domengeaux said.

Paul Breaux Middle teacher Julia Reed, president of the Lafayette Parish Association of Educators, voiced her organization’s support for the measures because the digital divide is a problem that teachers face in the classroom constantly, she said. Some students have the means to access additional learning resources at home, while others lack technology to meet basic assignment requirements.

Reed recalled a young student so determined to complete a school essay he typed the entire assignment on an iPhone. He didn’t have a computer or internet access at home, but he was nervous to ask Reed for an extension on the assignment.

“Can you imagine if he did have a computer and internet at his house? If he was so determined and so motivated to get it done that he typed the whole thing on his iPhone, what could he do if he had the tools he needed to succeed? Imagine what that could mean to students,” she said.

Tommy Angelle was the lone vote against the two measures, while board members Justin Centanni, Kate Bailey Labue and Britt Latiolais were absent for both votes. Angelle said after the board meeting he’d prefer families “have some skin in the game” and make at least a partial financial contribution to the internet costs.

David Lemaire, a Teurlings Catholic High School graduate who for the past month has been battling coronavirus, has died. He was 19.

Internet connectivity is one piece to the back-to-school puzzle. The school system is also looking for a solution to student device back-orders.

Roughly 3,700 devices were purchased with CARES Act funds to provide every student in the district a device, such as an iPad or Chromebook, but at the July 22 school board meeting Superintendent Irma Trosclair announced devices for kindergarten through second grade students were back-ordered and may not arrive until November.

Dickerson and staff estimated Tuesday the backlog is equivalent to about 2,200 devices. She said staff members are working on a plan to identify students willing to bring personal devices from home for their schoolwork, and school-supported devices would be allocated to other students who do not own personal computers.

District administrators believe there will be enough students bringing personal devices to effectively cover students in need of school-supported devices through resource shuffling until the back ordered devices arrive. Staff members also said they’re exploring changing their device orders because some products are more readily available than others and could be delivered within weeks, rather than months. 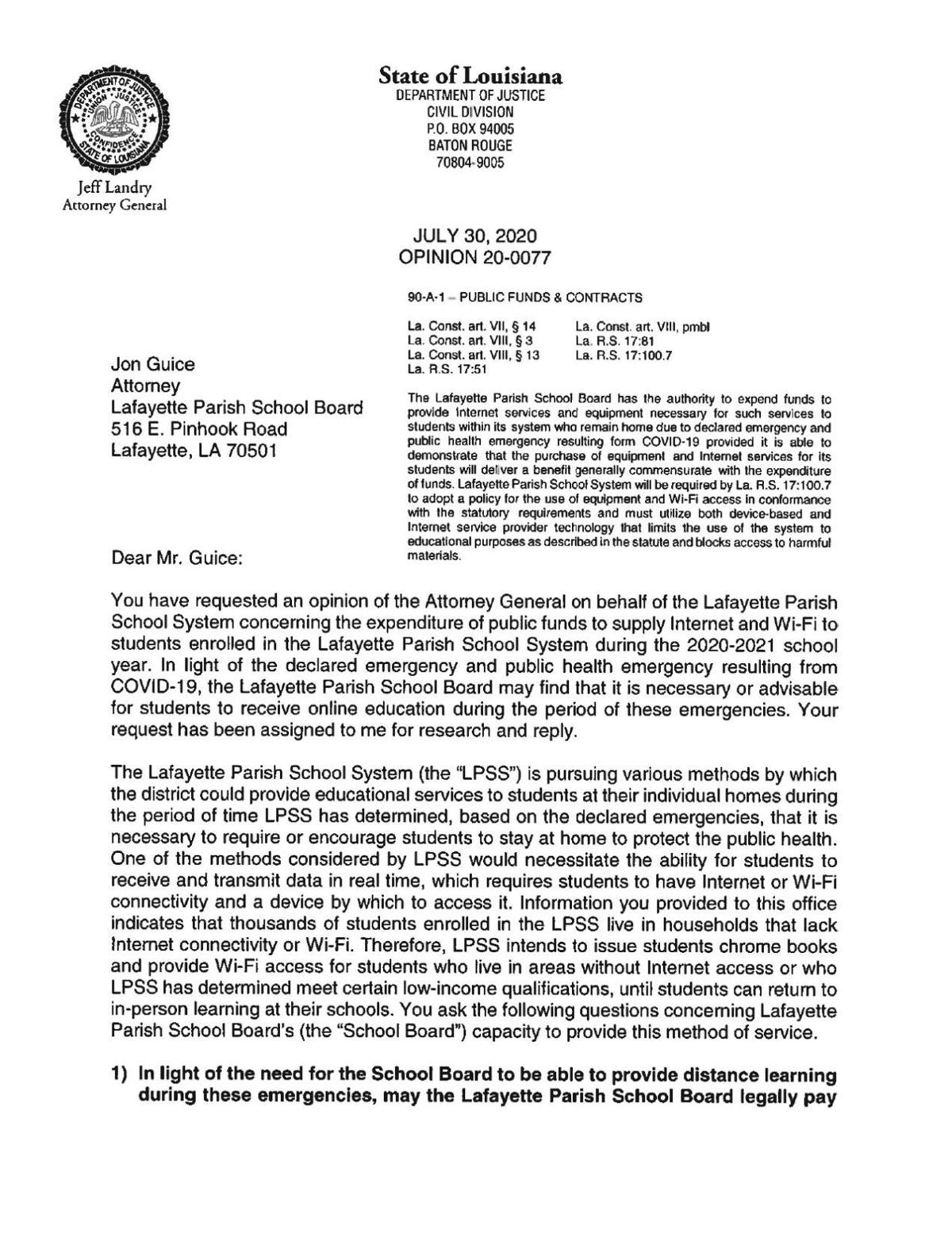