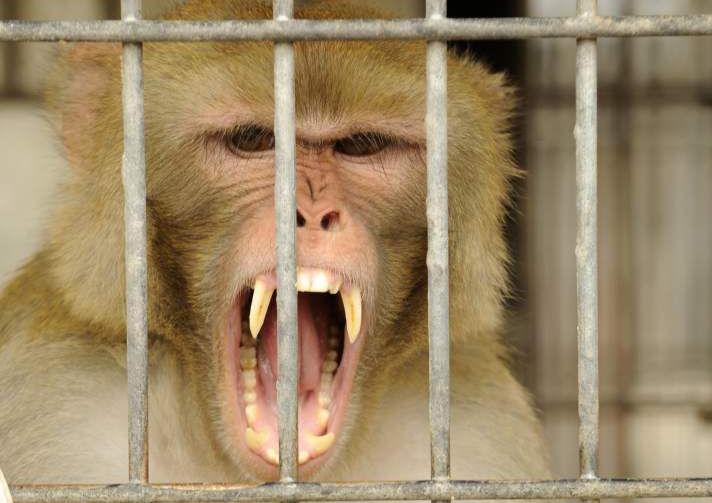 Advocate Staff Photo by Bryan Tuck. Photo shot on 3/5/09. A Rhesus Macaque bares its teeth in a sign of dominance from its cage at the New Iberia Research Center Thursday. 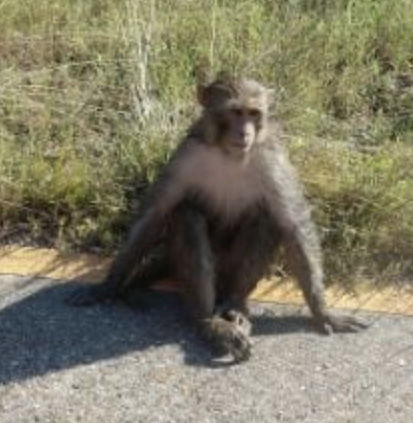 The young rhesus macaque that escaped from the New Iberia Research Center on Saturday has been recaptured. A New Iberia resident spotted the missing monkey Monday morning sitting along Admiral Doyle drive and called authorities.

Advocate Staff Photo by Bryan Tuck. Photo shot on 3/5/09. A Rhesus Macaque bares its teeth in a sign of dominance from its cage at the New Iberia Research Center Thursday.

The young rhesus macaque that escaped from the New Iberia Research Center on Saturday has been recaptured. A New Iberia resident spotted the missing monkey Monday morning sitting along Admiral Doyle drive and called authorities.

An Ohio-based animal rights organization has accused a University of Louisiana at Lafayette research facility of breaking federal law and committing negligent acts that led to the deaths of three monkeys in August.

A university spokesman at the research center in New Iberia confirmed that three rhesus macaques died there, apparently of heat stroke, on Aug. 5 but said no laws were broken.

"The University of Louisiana at Lafayette and its staff is diligent in the care it provides non-human primates at the New Iberia Research Center. The center follows rules and guidelines established by the U.S. Department of Health and Human Services and other agencies," the university said in an issued statement.

The research center reported the deaths to federal authorities that month and proposed changes in how monkeys would be handled going forward, suggestions the federal government apparently accepted.

The incident, revealed this week by Stop Animal Exploitation NOW!, was filed as an official federal complaint. The group’s co-founder and director, Michael Budkie, contended in an issued statement that deaths “were the result of sheer negligence, violating federal regulations for proper animal handling.” SAEN and Budkie called for a U.S. Department of Agriculture investigation and a maximum fine of $10,000 per infraction/per animal.

SAEN said UL Lafayette has a “history of breaking federal law” and has paid fines of up to $100,000 in 2017. The university has paid three other federal fines since 2007, SAEN said in its issued statement.

Budkie sent a letter of complaint Jan. 18 to Dr. Robert Gibbens, director of Animal Welfare Operations for the U.S. Department of Agriculture in Fort Collins, Colorado. The letter said UL violated the Animal Welfare Act on Aug. 5 when it put the monkeys in an area where temperatures were about 80-83 degrees at 8:30 a.m. and rose to 93 degrees when the animals were found dead at 12:30 p.m.

“I am appalled that (UL Lafayette) negligence allowed three monkeys to die unnecessarily," said Budkie. “It is absurd that … staff failed to take precautions when acclimating new animals on a day where the temperature reached 93 degrees Fahrenheit.”

In his Aug. 26 report to the U.S. Office of Laboratory Animal Welfare, Dr. Francois Villinger, director of the New Iberia Research Center, said the rhesus macaques were previously housed in Alice, Texas, which has weather similar to New Iberia’s. The average high temperature in August in Alice is 97.4 degrees.

Villinger said Wednesday that the monkeys, which were to be used for breeding, had been at the facility in quarantine for about a month. He said they were being acclimated into appropriate “colonies” and may have suffered some stress because of socialization with the new monkeys.

His report said the monkeys had been observed that morning and appeared to be doing well in the outdoor cage. The animals were not wounded, although he said the hierarchy among monkeys in the colony might involve intimidation. Villinger said UL presented plans to federal officials that included using wading pools, sprinklers and “indoor-outdoor” housing that would permit the animals to seek respite from the heat.

In its statement, the university said, "These preventive measures met the requirements established in the Extreme Environmental Temperature Assessment and Action Plan."

Although Budkie suggested UL Lafayette be fined, Villinger said the government had moved away from punitive measures and works with research facilities to develop and approve plans to improve the animals’ environments. Budkie, reached at his office, said Wednesday that that was no longer the case, although it had been.

He said UL was guilty of violating federal law that says handling of lab animals “shall be done as expeditiously and carefully as possible in a manner that does not cause trauma, overheating, excessive cooling, behavioral stress, physical harm, or unnecessary discomfort.”

SAEN was founded in 1996 to “force an end to the abuse of animals in laboratories,” its website says. Its investigations have been launched and actions have been taken against research universities across America, including Southern Cal, Stanford, the University of Washington, Michigan State, Toledo, Florida, South Florida, Emery, Johns Hopkins, Harvard and Penn.

Its complaints and lawsuits have sought to protect monkeys, dogs, cats, rabbits, ferrets, cows, sheep, guinea pigs and rats, among other animals.