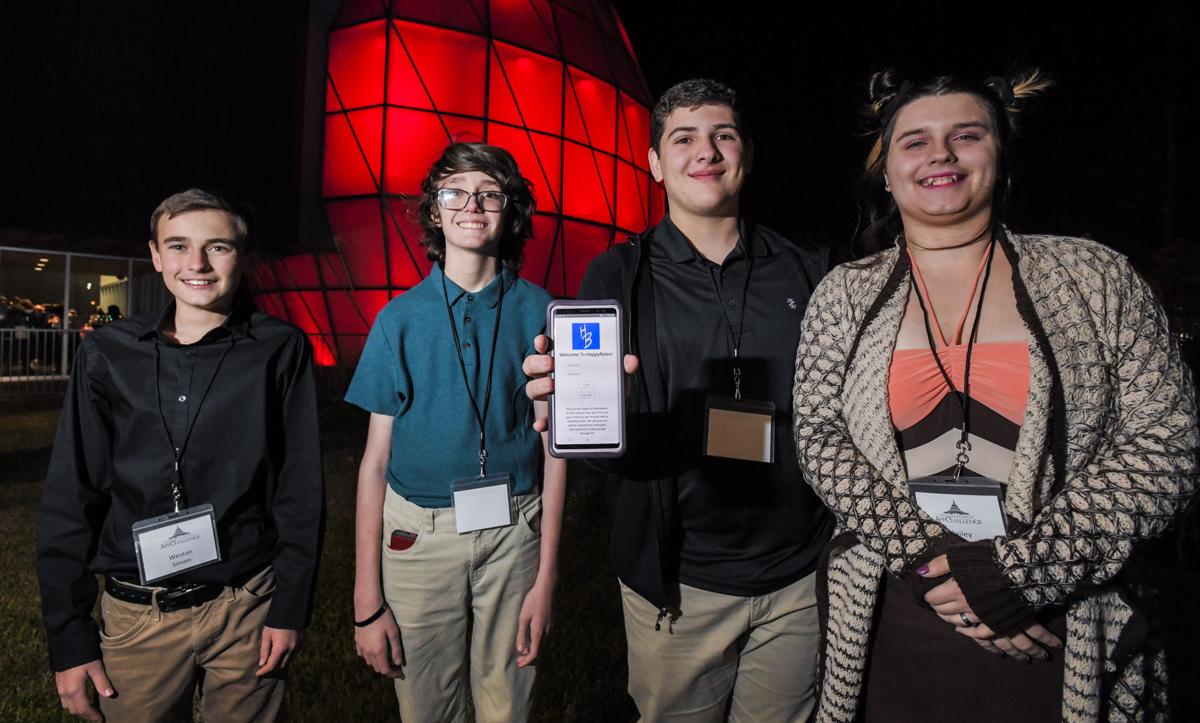 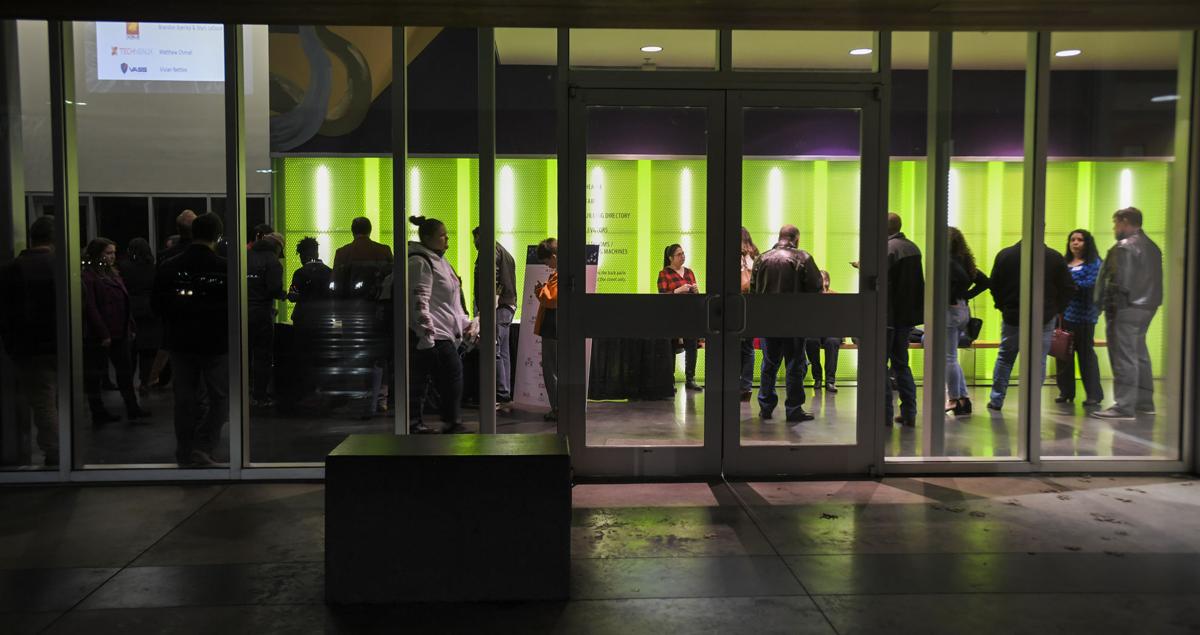 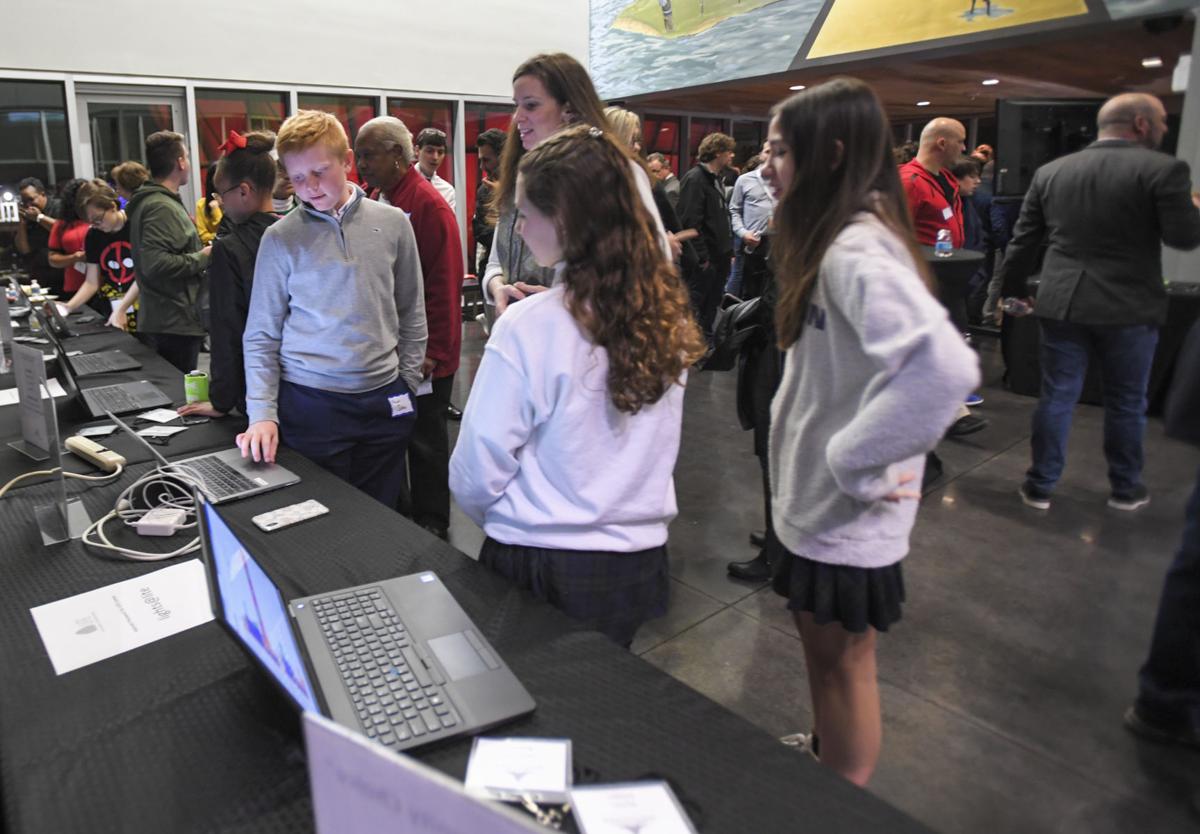 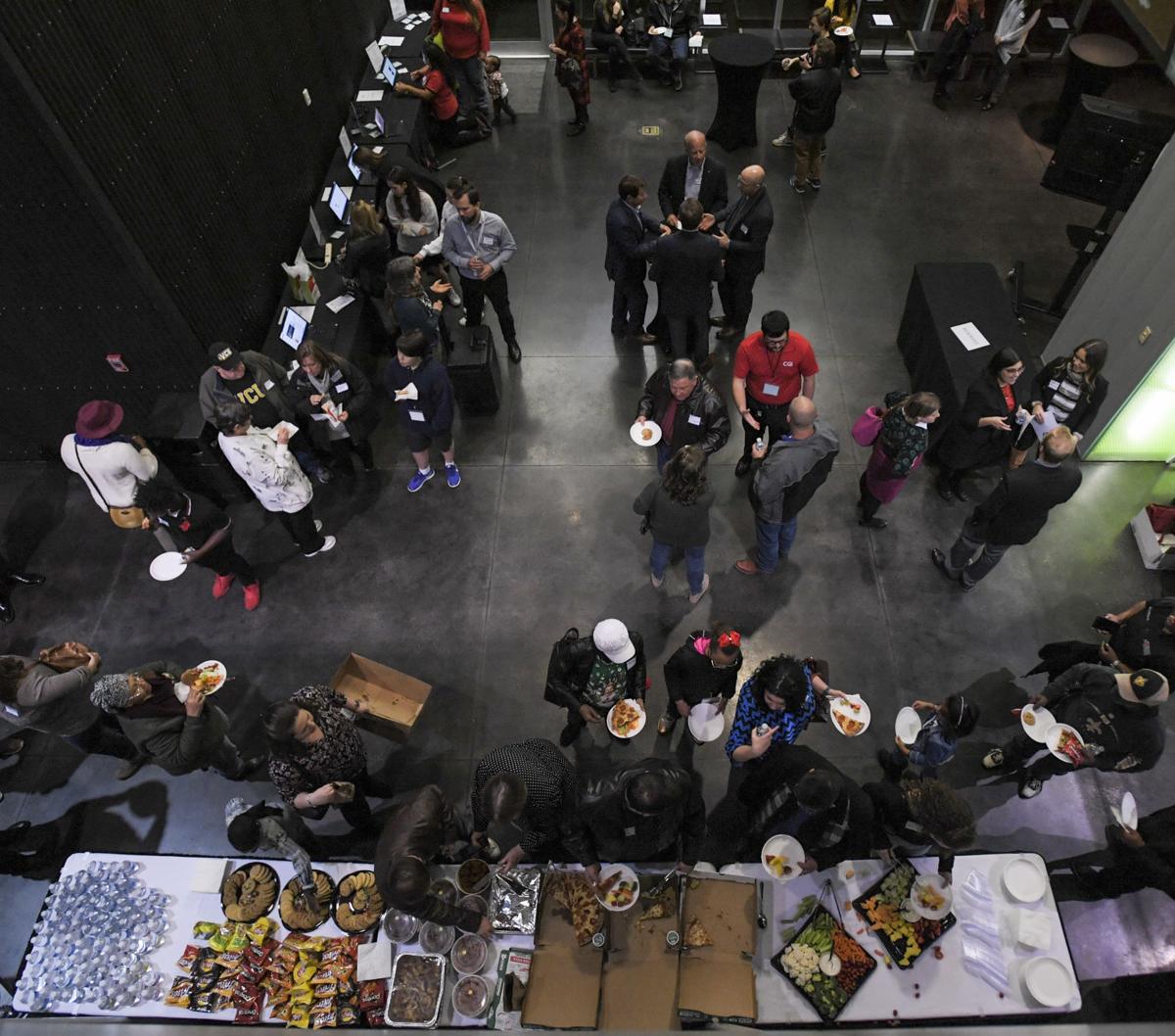 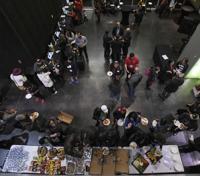 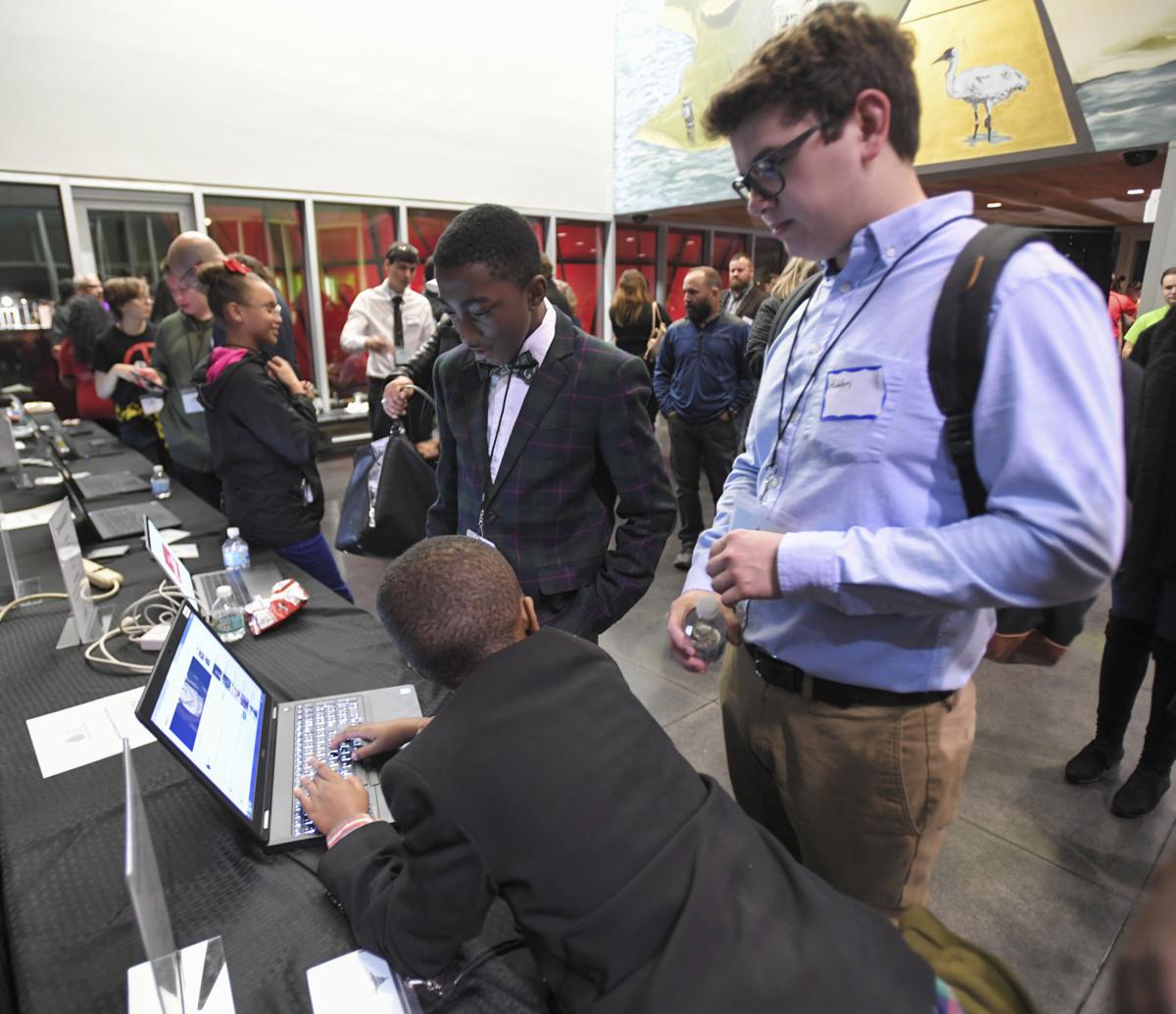 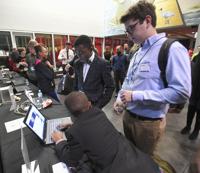 An app idea born from an after-school conference call scored a team of David Thibodaux STEM Magnet Academy students an invitation to the U.S. Capitol.

The app, HappyBytes, was one of 11 entries in this year’s Congressional App Challenge for Louisiana’s 3rd Congressional District. The challenge, launched in 2015, invites U.S. representatives to host app design competitions in their home districts to engage students in science, technology, engineering and mathematics skills and expose them to career opportunities.

HappyBytes is a multi-use app to combat depression and suicide. The app includes an inspirational quote called a “daily byte,” a survey to track your mood that helps tailor the daily quotes, a search function to find mental health professionals in your area and access to emergency support hotlines.

The designers, seniors Brendan Duhon and Cailey Bianchini, and freshmen Weston Simon and Jaydon Huval, wanted to tackle a community issue that was personal and could resonate with a broad audience. Addressing suicide prevention and depression was a natural fit, they said.

Duhon, 17, said he experienced hard times growing up and the other students also knew friends who had struggled with depression. The key was putting together a dynamic resource that was accessible and straightforward, they said.

“I think the current generation knows depression is a big issue, but we don’t do enough about it. It can be pretty difficult to get in touch with mental health professionals. Sometimes a phone call doesn’t always help 100%. Sometimes you need more,” Simon, 14, said.

The students embraced the challenge, opting to use more advanced text-based coding languages including CSS, JavaScript and HTML to build the app. Duhon, Simon and Huval developed the code, while Bianchini designed the logo, layout and helped storyboard how the app would function.

Though the app challenge is over, the team’s work is just beginning, they said. The students plan to fine tune the app and develop more advanced versions with design changes and a dynamic database that allows for increased personalization. They also plan to develop and launch a web version, they said.

Time was ticking down. Lafayette homeschool student Elijah Chopin was meticulously outfitting his Lego robot as teammates behind him cautioned…

The hope is to make HappyBytes viable for wide release and offer the app through Google Play and the Apple App Store. The more individuals they can help or save, the better, Duhon said.

“Our goal is to keep pushing,” he said.

The David Thibodaux team and other competitors were honored at a Wednesday event led by information technology consulting company CGI, which has a corporate office in Lafayette, and the University of Louisiana at Lafayette Informatics Research Institute.

CGI worked with Higgins’ office to bring the app competition to Louisiana’s 3rd Congressional District in 2017. The company launched a mentorship program to coincide with the challenge, pairing the student teams with professionals from CGI, other local companies and college programs to help guide and inform their creative process.

Blanche Trahan, 54, was one of the HappyBytes team mentors. Trahan is earning a degree in computer information systems through Northwestern State University’s online degree program. She and Cody Latiolais, a software developer at CGI, met with the David Thibodaux team at the library every Monday for six to seven weeks to help the students tweak their submission.

Trahan said the adults provided suggestions, but the students were the trailblazers and brainpower behind the project. They knew what they wanted to do from the outset, and each week they worked extra hours from home, advancing their app by leaps and bounds before each group meeting.

Trahan said finding out her mentees won the challenge was incredible.

“I was jumping for joy; tears came to my eyes I was so happy for them. This is something they worked very hard for and all of their efforts were worth it,” she said.

The award comes with national recognition; the students’ app will be exhibited at the U.S. Capitol and the students will have the opportunity to attend a “House of Code” reception in Washington D.C. with winners from the more than 300 Congressional districts that participated this year.

The honor is still a lot to process, the students said.

“I think it hasn’t registered for me yet that people all around the country will be seeing our work. We’re going to have our name in the Capitol,” Bianchini, 18, said.

“The fact that anyone gets the chance to put an app that they created in the Capitol is just incredible. It’s really impressive that they’re able to do this,” Huval, 14, said.

Quicksand, ant piles and McDonald’s, oh my! Fourth grade students at Woodvale Elementary navigated these and other treacherous and comical obs…

Every school has their morning routine; some broadcast comedic morning shows while others deliver an efficient reading of the day’s essential …