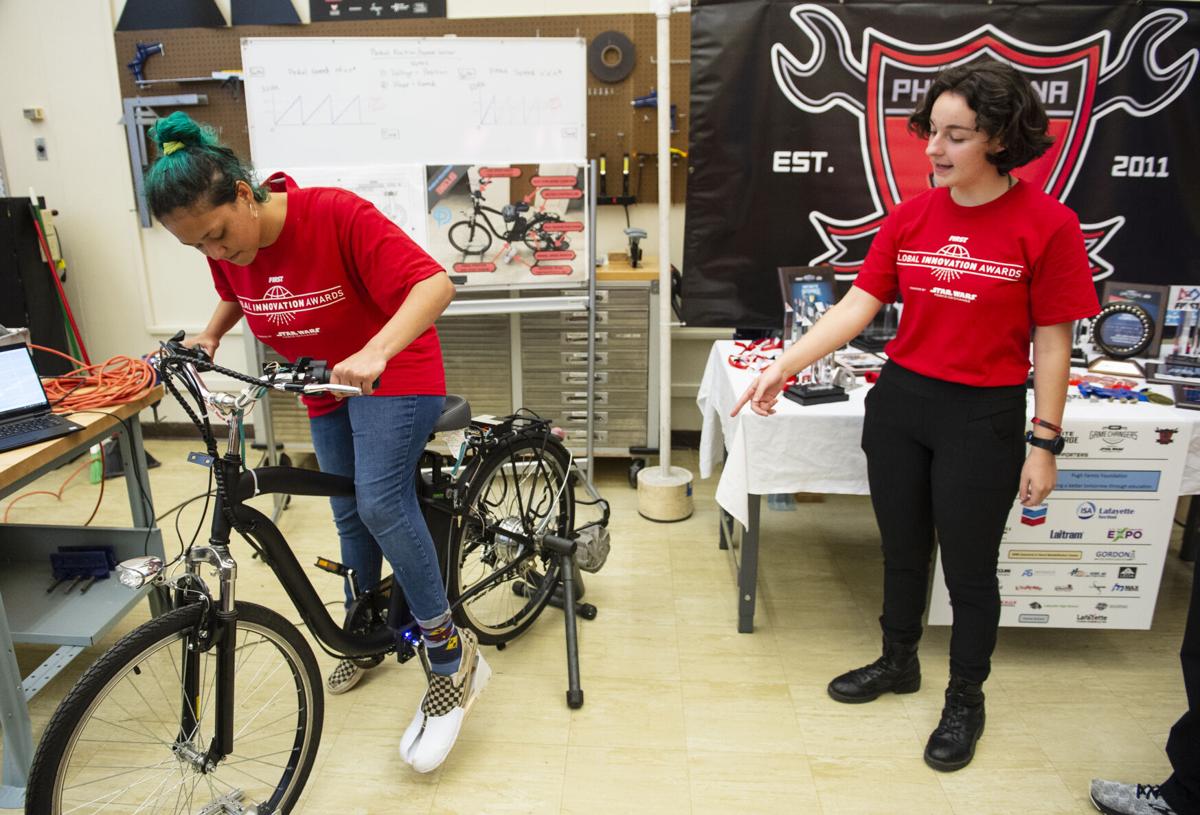 Ivy Sonnier, left, and Trinity Leblanc, of Team Phenomena, give an explanation of how their invention works on Wednesday, June 30, 2021, at the W.D. Smith Career Center in Lafayette. 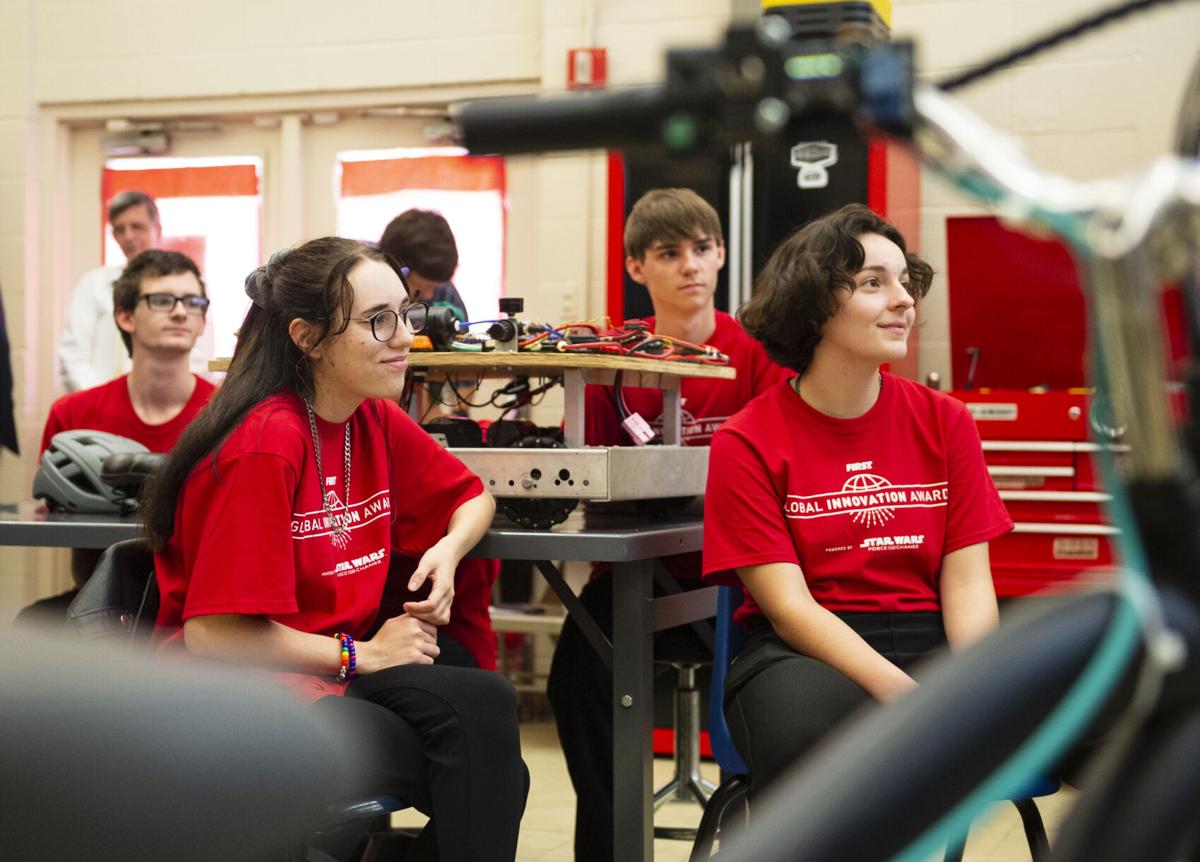 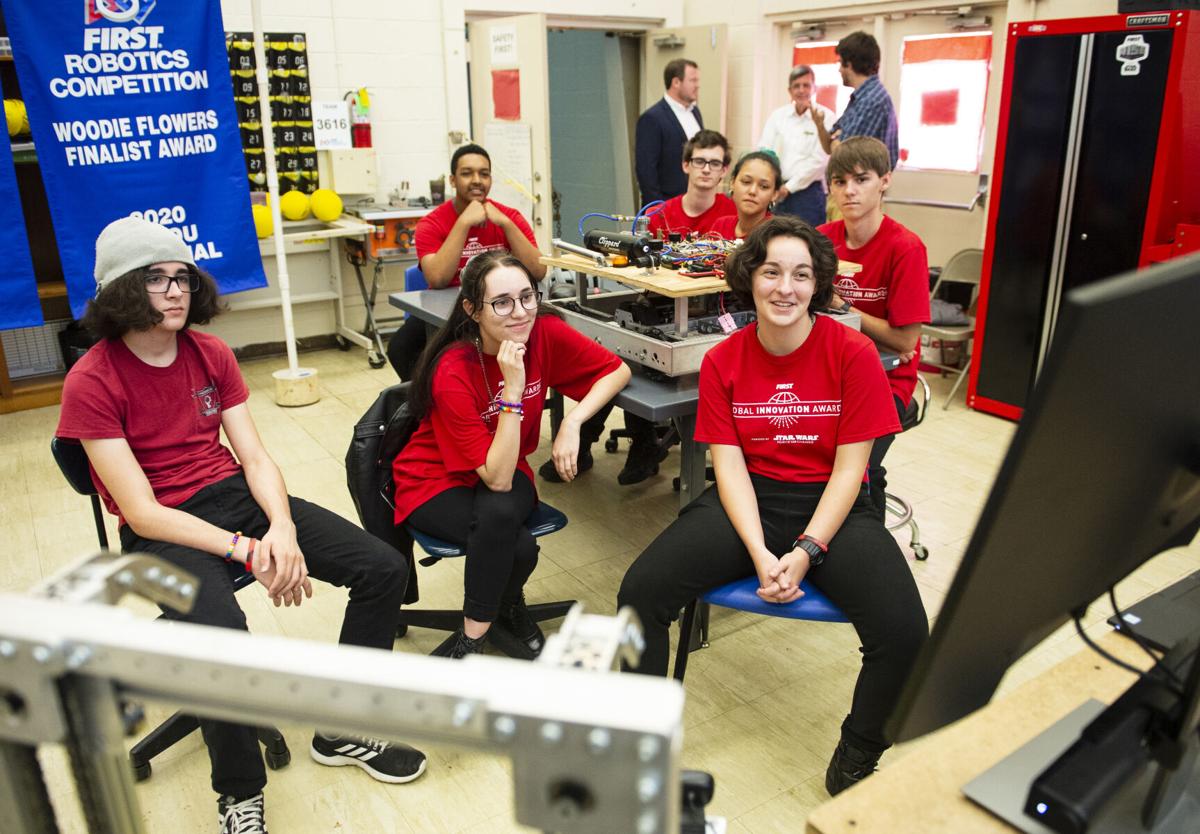 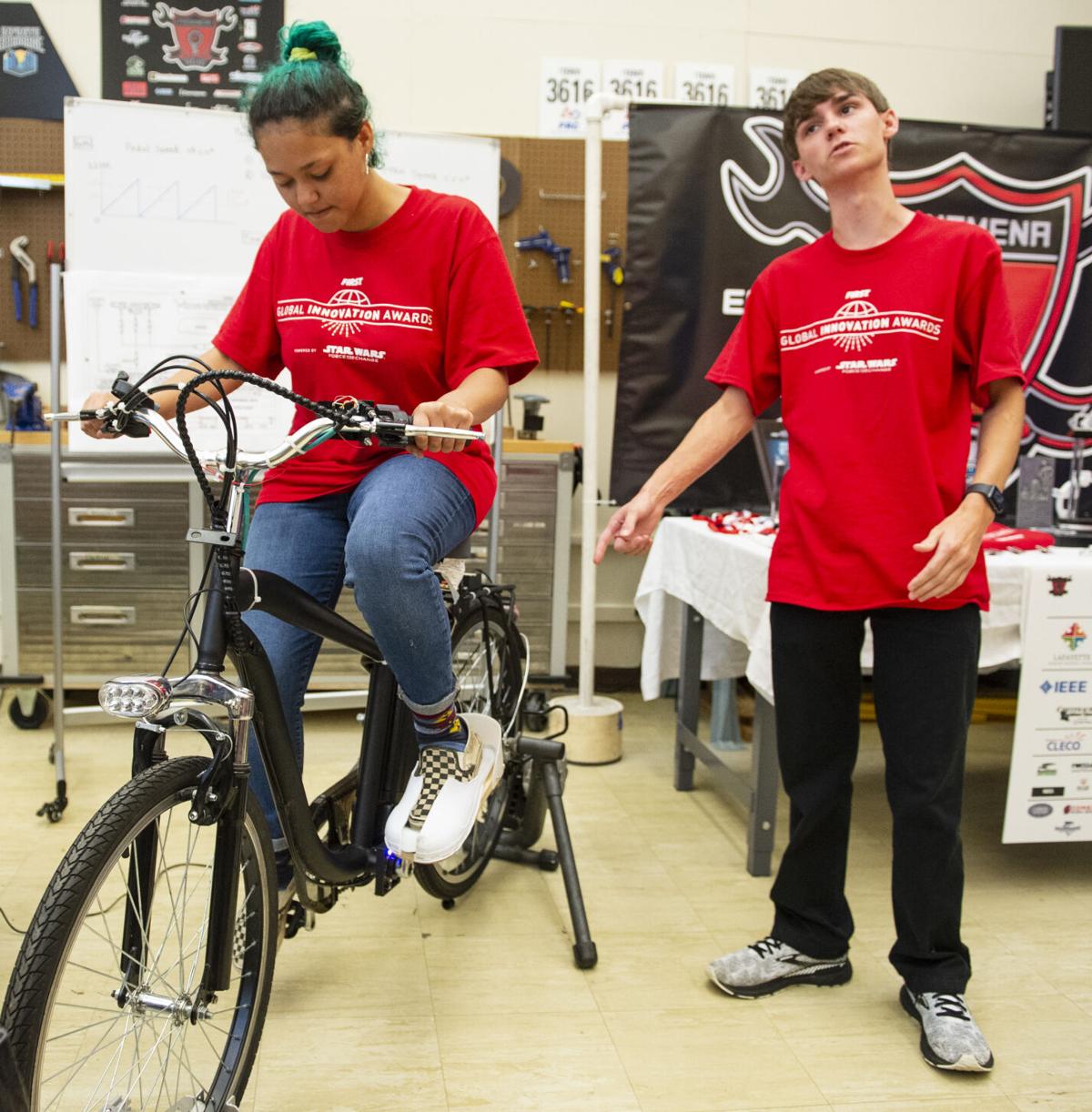 Ivy Sonnier, left, and Cody Carter, of Team Phenomena, give an explanation of how their invention works on Wednesday, June 30, 2021, at the W.D. Smith Career Center in Lafayette. 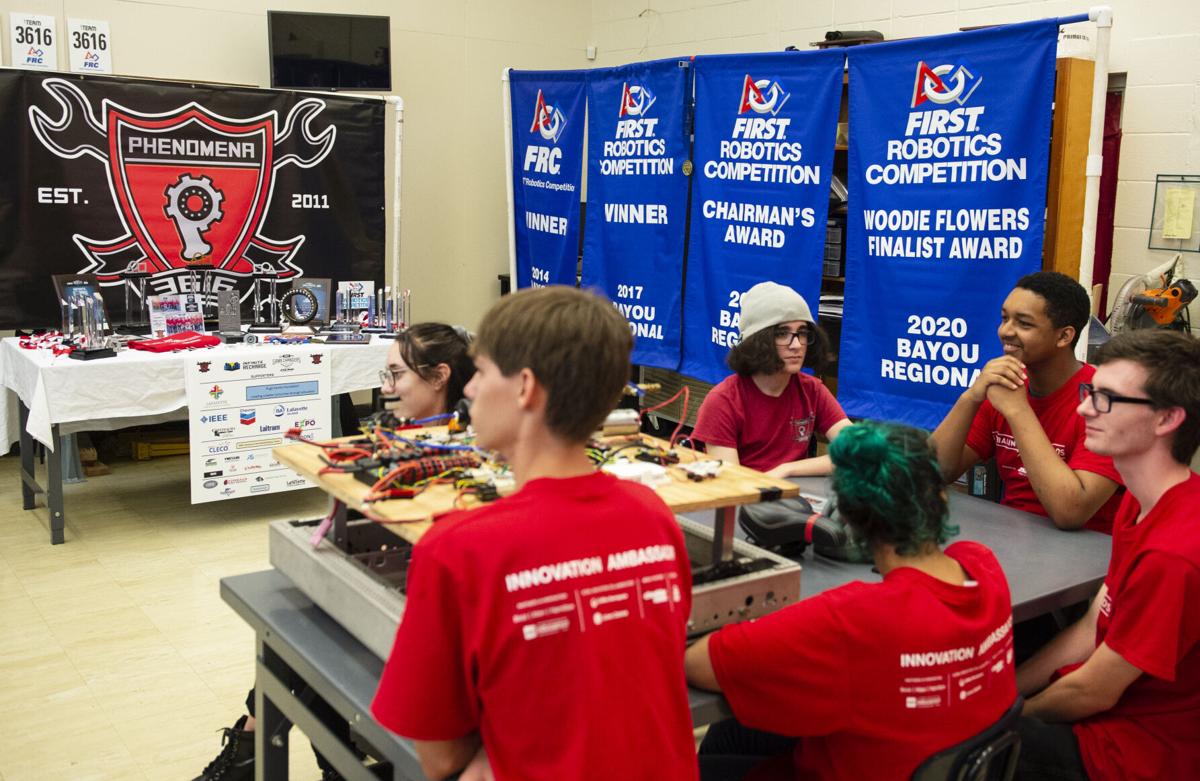 Awards from years past are on display in the Phenomena workshop on Wednesday, June 30, 2021, at the W.D. Smith Career Center in Lafayette.

Ivy Sonnier, left, and Trinity Leblanc, of Team Phenomena, give an explanation of how their invention works on Wednesday, June 30, 2021, at the W.D. Smith Career Center in Lafayette.

Ivy Sonnier, left, and Cody Carter, of Team Phenomena, give an explanation of how their invention works on Wednesday, June 30, 2021, at the W.D. Smith Career Center in Lafayette.

Awards from years past are on display in the Phenomena workshop on Wednesday, June 30, 2021, at the W.D. Smith Career Center in Lafayette.

A group of Lafayette high school students is hoping to take a bicycle adaptation kit for people with disabilities they created for an international robotics competition to the open market, inspired by the indomitable spirit of the 5-year-old boy who sparked the project.

Lafayette’s Team 3616: Phenomena robotics team competed at the 2021 FIRST Global Innovation Awards against 19 other international teams in the FIRST Robotics Competition Innovation Challenge at the end of June. FIRST, or For Inspiration and Recognition of Science and Technology, is an international nonprofit that promotes students’ exploration of science, technology, engineering and mathematics through robotics.

While they didn’t win, the local teens are charging forward with their invention in the hopes of bringing it to market.

Ivy Sonnier, an Ovey Comeaux High School rising senior, said the Pheno Advance 3616 kit can be added to any existing bicycle to make it accessible for riders with a leg prosthesis or compromised leg. The kit includes a low-speed assist button, sensors, a motor and a specialty pedal for comfort and security for a prosthetic leg, she said.

When the rider first mounts the bike, they can use the low-speed assist button to engage the motor at a low speed while they gain their balance, then begin to pedal for themselves. The rider will pedal with their good leg, while sensors track the motion and engage the motor for a 180-degree rotation to make up for the impaired leg, keeping the pedaling cycle unbroken while still allowing the child to exercise, Sonnier said.

The team’s invention received a warm reception when presented during the innovation challenge, she said.

“It’s unexplainable watching something go from an idea to something tangible and having people around the world in high positions looking at it and seeing what we see,” Sonnier said.

The bike kit was inspired by 5-year-old James Boquet, grandson of Southside High School teacher Kellie Boquet. The educator worked alongside faculty leader and head mentor Lisa Ranney at Comeaux High for years and kept her updated on her grandson’s development. James was born without the femur and fibula bones in his left leg. At 1, his foot was amputated and he received a prosthesis, she said.

James is a normal 5-year-old -- he loves to hunt and fish with his dad, he’s outdoorsy, fearless and a natural people person -- he just does it all with a prosthetic leg, Boquet said. Since he’s never known differently, it was a harder and scarier adjustment for the adults in his early years than for James.

“We were the ones scared, he was never scared or doubting himself. He was never worried about himself,” she said.

Faced with an expanding inventory of campus technology and a shortage of skilled hands to handle repairs, St. Martinville Senior High School b…

Even with his can-do spirit, there are some things James is hindered from doing, like riding a bicycle with his older sister and cousin. While he has electric substitutes, he wants to exert himself and feel the joy of propelling himself on the bike, his grandmother said. Boquet said seeing how far the Phenomena students have taken their work has been thrilling.

“At first I just didn’t have any words. I was so humbled that they picked him and our situation...God has a plan and if James’ plan can extend to someone else’s plan that God has given them then that’s a win-win for everyone,” Boquet said.

Sonnier said the team spoke with James and his father, Brent Boquet, over video to learn how his prosthesis functions and his needs, then consulted with an orthopedic surgeon, engineers and a paralympic bike mechanic while developing their product. The project began as Sonnier and two other girls’ focus in January, then became an “all hands on deck” endeavor around April when it became clear the product could go all the way in competition, she said.

There were challenges, the 17-year-old said, both technically and working as a group. They learned the importance of good communication through trial and error, and problem solved as the bike kit became increasingly more advanced, considering needs like initial stability and a fail safe release for the pedal in case of injuries.

“It was stressful but it was rewarding. It was like, you’d go through the stress and you’d leave but you’d want to come back the next day because you saw it improving,” Sonnier said.

The team was supported by a group of professional mentors, including first time mentor William Ness, the chief information officer for the Lafayette Economic Development Authority. Ness said he helped the team develop the business plan for the Pheno Advance 3616, looking at production costs, production partners, sale price, selling channels, marketing and other elements.

“I left every day from here so much more energized than when I got here. The kids were amazing to work with,” Ness said.

From Acadiana High JROTC to Air Force active duty, these Lafayette siblings do it all together

There aren’t many siblings like the Halls. In just four years, Ki’Ara, Tyreke and Maleke Hall have all graduated from Acadiana High School as …

Ranney said the group has a functioning prototype of their kit and they’re taking steps to secure a provisional patent on the invention. From there, they’ll continue testing, building on the 2,000 data points they’ve so far collected to advance the kit. They’re also developing an app companion for parents to monitor their children’s progress on the bike, she said, while making plans to hopefully bring the finished product to market.

Phenomena, in its 12th year, is a Lafayette Parish Public School System sponsored robotics team open to high school students from the Acadiana region, from all schools and parishes, Ranney said. The Comeaux High educator launched the program with a $6,000 grant from JCPenney and seven students, and today the team has 20 members and has been invited to FIRST’s global championships five times.

“It brings a lot of joy to see these students grow,” she said.

Recent Southside High graduate Cody Carter, on path to attend LSU this fall, participated in Phenomena all of high school, but has been unofficially involved since middle school when his older brother was a team member. Carter said he’s grown more confident, strengthened his technical abilities, learned to be a leader and accountable partner, and built lasting friendships.

Ending his Phenomena experience by helping a boy with local ties is a satisfying end, he said.

“Just imagining what he’s going through -- having feelings that he can’t be like a regular kid because of his prosthetic leg -- that really hurts me,” Carter said. “The fact we’re giving something that’s going to make him feel more normal to regular kids, that’s what we do it for.”