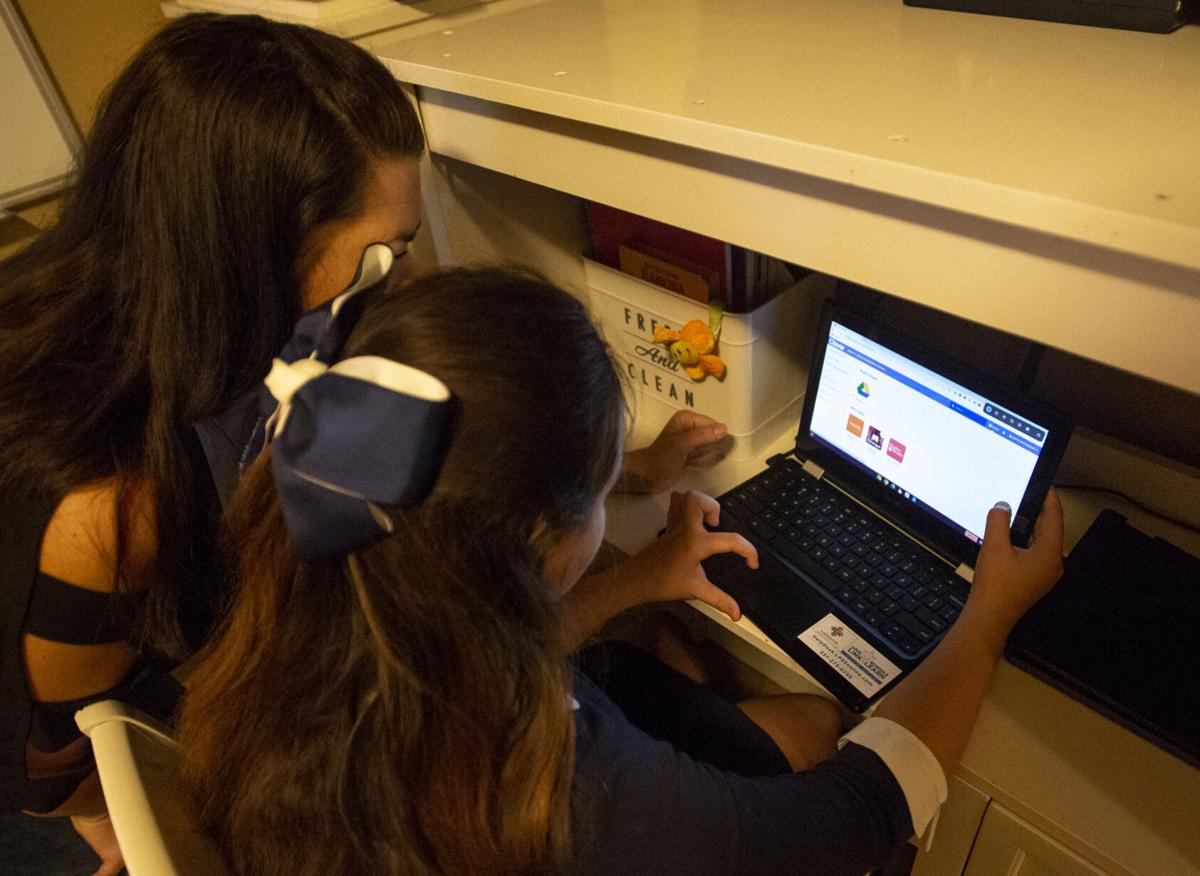 Amanda Patterson, left, views an assignment with her daughter on a school issued laptop on Saturday, September 19, 2020, at their family home in Youngsville. 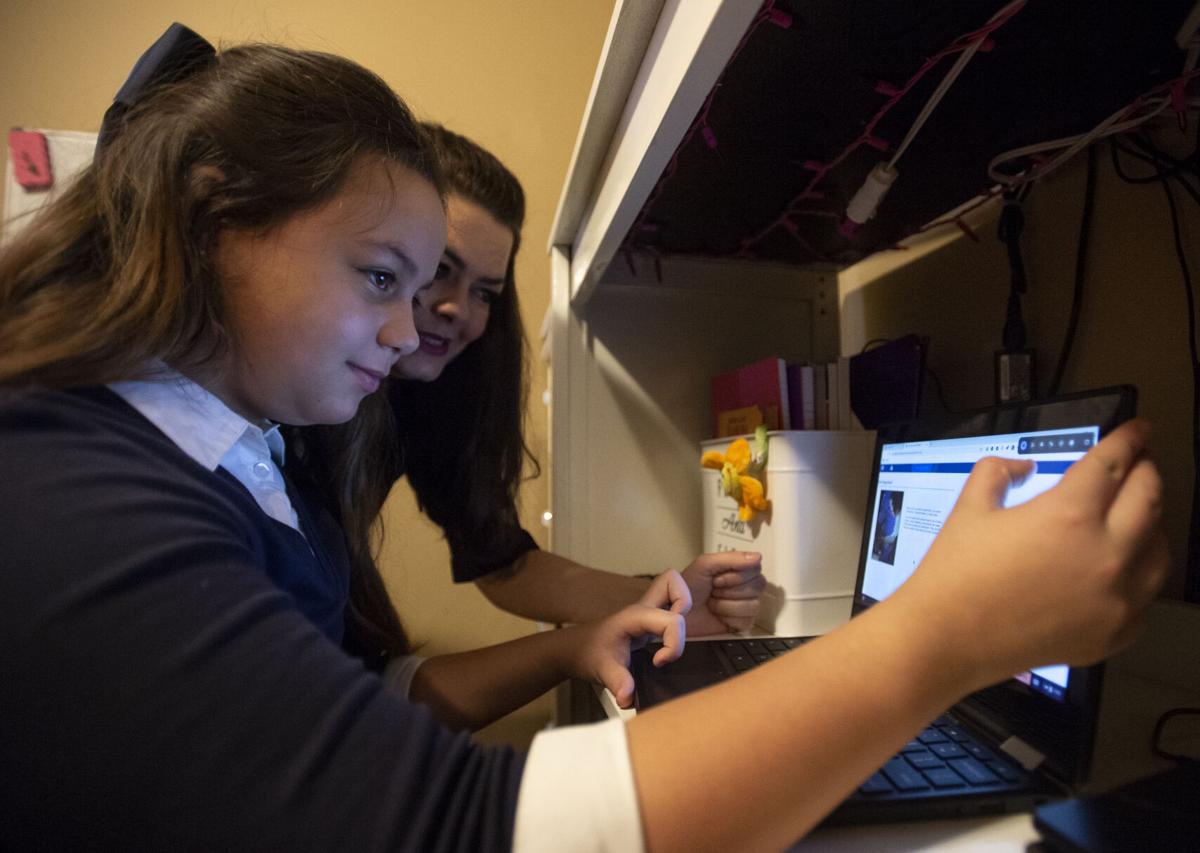 Amanda Patterson, in background, views an assignment with her daughter on a school issued laptop on Saturday, September 19, 2020, at their family home in Youngsville. 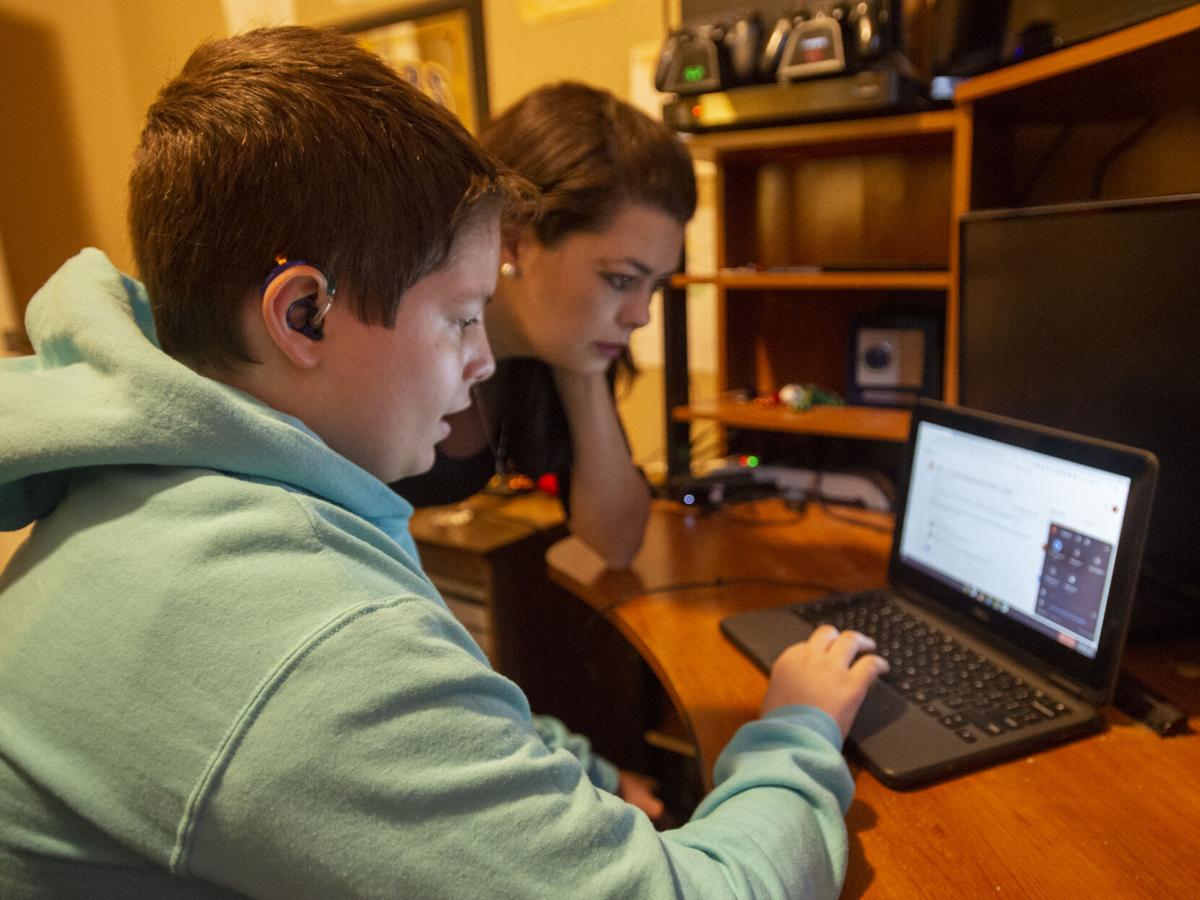 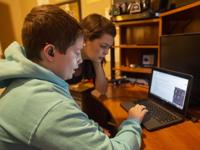 Amanda Patterson, in background, views an assignment on her son's school issued laptop on Saturday, September 19, 2020, at their family home in Youngsville.

Amanda Patterson, left, views an assignment with her daughter on a school issued laptop on Saturday, September 19, 2020, at their family home in Youngsville.

Amanda Patterson, in background, views an assignment with her daughter on a school issued laptop on Saturday, September 19, 2020, at their family home in Youngsville.

Amanda Patterson, in background, views an assignment on her son's school issued laptop on Saturday, September 19, 2020, at their family home in Youngsville.

Parents with children in the Lafayette Online Academy are banding together to navigate the emotional struggles, maze of technology and new learning style that have accompanied students’ first weeks in the program.

When school began Sept. 8, approximately 8,500 K-12 students across the district were enrolled in the Lafayette Online Academy, an online learning alternative built around recorded lessons. The program has existed for roughly four years and was scaled up to give parents an alternative to sending their children to in-person classes during the novel coronavirus pandemic.

The transition has been a challenge, said Amanda Patterson, whose fourth grade daughter is enrolled in LOA. Patterson and roughly 500 other LOA parents have rallied together in the Facebook group “LOA Newbies” to share information and vent their frustrations and anxiety while teaching their children at home.

Patterson and friends got the idea for the group watching fellow parents scramble on Facebook while waiting for the first orientation email to arrive Sept. 8. Patterson said she was confused and worried she messed something up as she waited hours for the email to arrive, and saw that feeling mirrored by other parents.

Instead of getting by alone, she realized they could do better together.

The mom of two said the group has buoyed their spirits during the transition.

“[Without the group] I’m going to go as far as to say I think a lot of people would’ve already given up and would’ve tried to get out of it. Definitely." Patterson said. "They don’t have it organized perfectly and I understand why. I get it. It’s new for all of us and it’s very difficult to navigate. If we didn’t have each other we would all be so lost."

Parents have shared a hodgepodge of experiences. Some have struggled connecting with LOA facilitators at their child’s base school, while others have had frequent and timely responses to emails and calls. Apps have crashed, disappeared for updates or deleted submitted assignments, and parents have struggled to keep straight which system is used for what purpose, she said.

“I’m in the same boat that every other parent is in,” District 4 school board member Tehmi Chassion said.

Chassion’s fifth grade son T.J. is enrolled in LOA and they’re taking it one day at a time, working lessons around his 2-year-old daughter Summer’s demands to play with her brother. Chassion said they’ll lure Summer outside for time on the tricycle or occupy her with tasks assisting in the kitchen to free up time for T.J. to learn.

The school board member has been vocal about his concerns over the coronavirus and the return to school. He opted to enroll T.J. in LOA to lessen the chance of his family’s exposure, especially because his mother lives with the family and is at higher risk.

Chassion said he’s tried to act like a bridge in the LOA Newbies Facebook group when possible, rounding up parent concerns and forwarding them to the district or hopping in when he has answers to recurring problems.

School facilitators and district staff are fielding calls and emails as quickly as possible. But, with the high volume of requests, sometimes it helps having a go-between who can ensure problems don’t get overlooked, he said.

“I don’t fault a single person that gets frustrated and expresses their displeasure because I have it, but mine autocorrects itself because I know what they’re doing on the back end." Chassion said. "They’re so busy fixing problems as they crop up. There’s no way you can account for all the problems that have popped up."

Chassion said it hasn’t been easy even with an intimate understanding of both sides of the online learning picture. The resources are there but you need to know what information to look for and how to find it, he said.

“I took the nonchalant approach. I thought, ‘My son’s going to start, it’s LOA, he’s on a Chromebook, he’s going to open up the Chromebook, there’ll be a lesson and he’s going to do it,’ not knowing it was a lot more than what I was thinking,” Chassion said.

“With the younger kids especially, it’s not something where you can just send them off and expect them to sit there and do it the whole time and know where to go and what to do,” Patterson said.

Patterson’s family is juggling two learning situations: her sixth grade son’s hybrid schedule at Youngsville Middle and her daughter’s at-home learning through LOA. She hoped to enroll both children in LOA when the district announced that elementary students would attend class full-time, but enrollment was only reopened to elementary students.

The mother of two -- who has Lupus and other health conditions -- said decisions around school were a difficult combination of weighing health risks and traditional schooling needs.

“They had way more cons to [LOA] than pros but the pros were that they were less likely to get the virus and less likely to spread it. … It outweighs all the bad things about it,” Patterson said.

Patterson wakes her daughter for school at the same time as her son, she dresses in her uniform to get in a work mindset, they eat breakfast and then hit the computer.

Her daughter is self-driven, but even with her ability to self-regulate and focus Patterson has to help her navigate a handful of apps and settings to complete her work, then troubleshoot the technical glitches and surprise problems, she said.

Ashley Cortez, a fellow LOA Newbies group administrator, and her husband split LOA learning duties with their two daughters, 9-year-old Anna and 5-year-old Kaytlin. Her husband, who has a kidney condition, oversees the bulk of the learning day while Cortez works her morning shift as the assistant bakery manager at the Albertsons in Broussard, she said.

The girls wake up at 8 a.m., eat breakfast and warm up for the day before completing about two to three hours of learning. They eat lunch around noon and take a midday break until Cortez returns home around 1 p.m., and she helps the girls through another hour of learning, she said.

The parents have carved out a little learning space with desks, a whiteboard and organized notebooks and folders to help them get in a school mindset.

Cortez said she’s pleased -- and relieved -- with how well the girls are performing now that the family is hitting its stride navigating the assignments and settling into a routine. Anna, who Cortez opted to hold back last year, is getting 100% scores on her English and reading comprehension work, usually her biggest stumbling block.

Cortez and Patterson said they’re hopeful most LOA parents will get to a stronger place with the program in the coming weeks. In the meantime, the parents in the LOA Newbies page are cheerleading one another and commiserating.

“It’s frustrating when you’re lost and you don’t know what’s going on, but I don’t blame anyone. It’s a new thing, it’s a lot of kids doing it, it’s so many people. I think this was bound to happen." Patterson said. "They were going to have some issues. I think in the next few weeks it’s going to all get ironed out. We just have to hold out until then and stay positive.”

Lafayette public school students will remain in Phase 2 for at least another month, the district announced Friday.