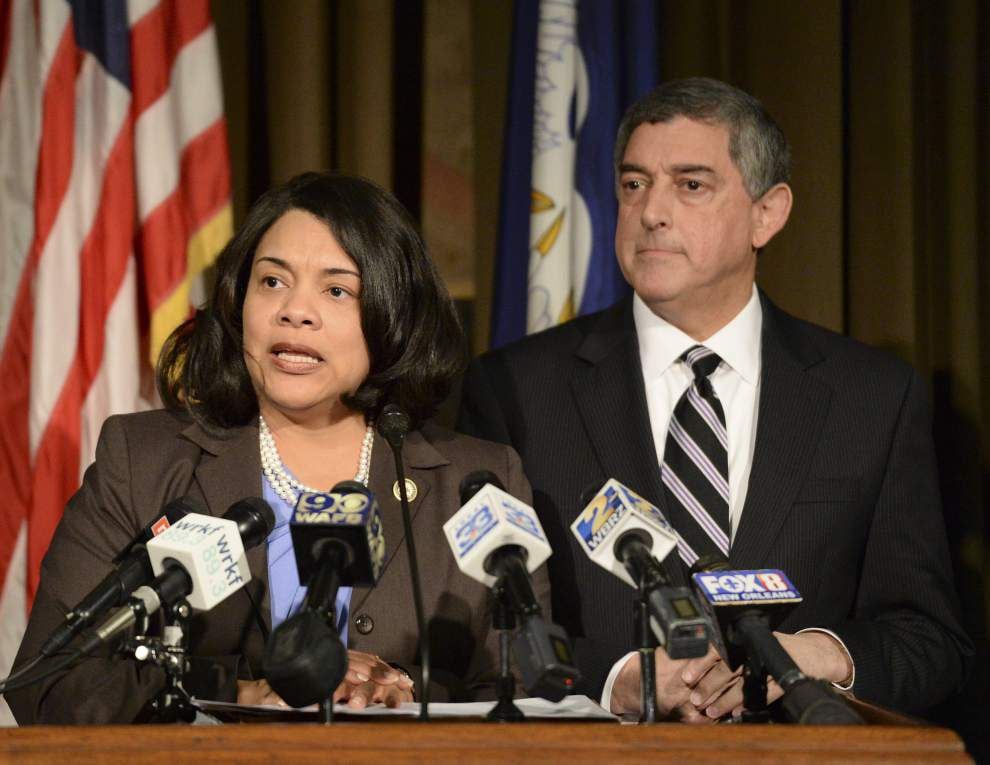 Advocate staff photo by HILARY SCHEINUK -- Secretary of the state Department of Revenue Kimberly Robinson speaks during a press conference held in January to discuss budget options. With her is commissioner of the Division of Administration Jay Dardenne, also a member of the task force. 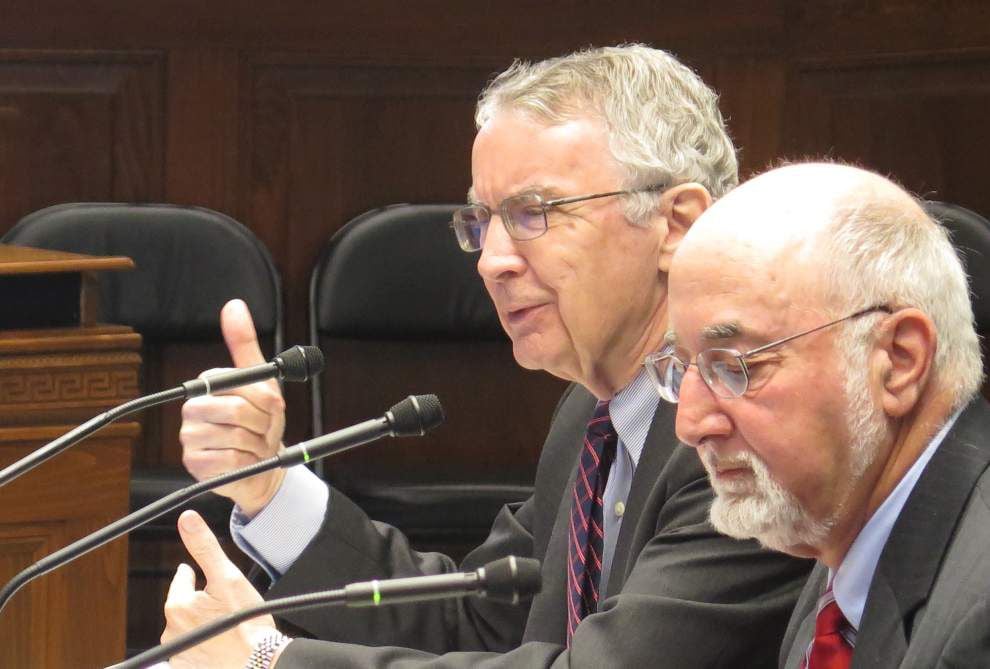 Advocate staff photo by HILARY SCHEINUK -- Secretary of the state Department of Revenue Kimberly Robinson speaks during a press conference held in January to discuss budget options. With her is commissioner of the Division of Administration Jay Dardenne, also a member of the task force.

Now they will have the chance to change it.

A task force studying the state’s budget and tax system is meeting Wednesday to finalize recommended changes to a tax system that is complex, unstable, hits the poor harder and has not raised enough money in years to meet the spending plans of the governor and state Legislature.

The far-reaching recommendations on taxes would affect just about every aspect of life in Louisiana – that is, if state legislators, the governor and voters approve the changes.

In general terms, the Task Force on Structural Changes in Budget and Tax Policy is set to propose lowering tax rates, closing tax loopholes and giving local governments greater authority to raise revenue to lessen their dependence on aid from state government, said Robert Travis Scott, a task force member who is president of the nonprofit Public Affairs Research Council of Louisiana.

Just about everyone will find some aspect to dislike, and indeed business groups that profess to favor free markets have already begun lobbying to keep their tax subsidies.

“It comes back to the saying: ‘Don’t tax you, don’t tax me, tax the man behind the tree,’” said Louis Reine, a task force member who is president of the AFL-CIO in Louisiana. “The Legislature has the responsibility to fund government. Hopefully, they will get out of the short term fixes and come up with a tax system that is more fair and sustainable.”

Some of the changes will require a high hurdle – a two-thirds vote in a legislature controlled by anti-tax Republicans followed by a required majority vote of the people.

The Legislature created the task force earlier this year at the behest of state Rep. John Schroder, R-Covington, who, while Bobby Jindal was governor, argued to mostly deaf ears that his colleagues needed to make structural changes to the budget.

During the Jindal years, legislators repeatedly approved budgets that were out of balance, and they papered over the deficits by allowing the governor to draw down the state’s various reserve accounts.

Gov. John Bel Edwards inherited a $2 billion deficit when he took office in January. Saying that the day of reckoning had arrived, he vowed to put the state’s budget on sound footing.

Lawmakers, however, approved only a raft of temporary tax measures, most notably, a one-cent increase in the sales tax. That gave Louisiana the highest combined state and local sales tax in the country at nearly 11 percent.

Most of the tax increases approved by the Legislature expire in 2018, setting up the choice of reauthorizing those taxes, approving other taxes or cutting even more money from the state’s colleges and universities and the public health care system.

In justifying kicking the budget can down the road once again this year, lawmakers said they wanted to see the results of the task force created by Schroder’s measure.

The 13 members have been meeting since March, often more than once per week, on a volunteer basis. They have dug deep into arcane tax law in an effort to propose changes that they believe will serve Louisiana going forward.

At Wednesday’s meeting, the members will be asked to approve recommendations that have won preliminary approval.

In interviews, task force members said they want to allow the one-cent sales tax increase to expire and to replace most of the lost revenue by ending laws that allow favored transactions to be conducted tax-free. The task force also wants to begin taxing some services that have been tax-free so far.

“The state will collect about $4.3 billion from sales tax revenue in the current fiscal year,” said Jim Richardson, an LSU economist who co-chairs the task force. “We’d like to keep that at about $4 billion.”

For individuals, the task force favors eliminating a tax deduction for federal taxes and cutting in half another, in conjunction with lowering tax rates. Earlier this year, the Legislature rejected such a plan, which would on net make the wealthy pay more. The individual income tax changes that the task force will propose would require voter approval since eliminating the tax break allowing the deduction of federal taxes on state tax returns is part of the Constitution.

For corporations, task force members are supporting a plan approved by the Legislature that will be before voters on Nov. 8. It would lower corporate tax rates and offset the revenue loss by ending several popular corporate tax breaks.

The task force is also favoring a five-year phase-out of the state’s convoluted inventory tax credit. The current set-up allows companies to reduce their state taxes or even receive a refund from the state for the taxes they pay to local governments on their inventory.

The task force will propose several measures to allow local governments to raise more revenue to cover the $400 million to $500 million per year they would lose by no longer collecting the inventory tax.

Sheriffs, who collect local taxes, oppose eliminating the inventory tax, said Michael Ranatza, the executive director of the powerful Louisiana Sheriffs’ Association. He noted that the Constitution protects the money they receive from the inventory tax while the governor and Legislature could reduce those revenue sources that would replace it.

One of the ways the task force could recommend for local governments to collect more money is by trimming a different tax break – known as the Industrial Tax Exemption – in which a state board routinely waives the local taxes that companies would otherwise have to pay. Edwards has already begun to trim that tax exemption.

Kimberly Robinson, the state’s Revenue secretary, co-chairs the panel and said she and the others won’t be using it to propose higher taxes.

“Whether we raise more revenue is a question for the Legislature,” Robinson said.

For the second time in as many months, the committee formed to revamp the way Louisiana gove…

She was aiming her comments at Schroder and other Republicans who fear that the task force will become a vehicle to try to raise more money.

Schroder said Republicans in the House will meet on Nov. 4, and discussing the task force’s recommendations will be a prime topic.

“We have now to the end of the year to come up with solutions,” Schroder said. “It’s dangerous not to have a plan going into the session.”

The less conservative state Senate seems likely to be more amenable to what the task force recommends.

“If we don’t figure out a lasting solution, this Legislature cannot continue to limp along,” said state Sen. JP Morrell, D-New Orleans, who heads the upper chamber’s tax-writing panel. “Triaging this no longer works. We have to do in and do surgery. If we don’t, the patient dies.”

Louisiana closed the books on the last budget year with a $313 million deficit, and state agencies and colleges are being asked to prepare for…