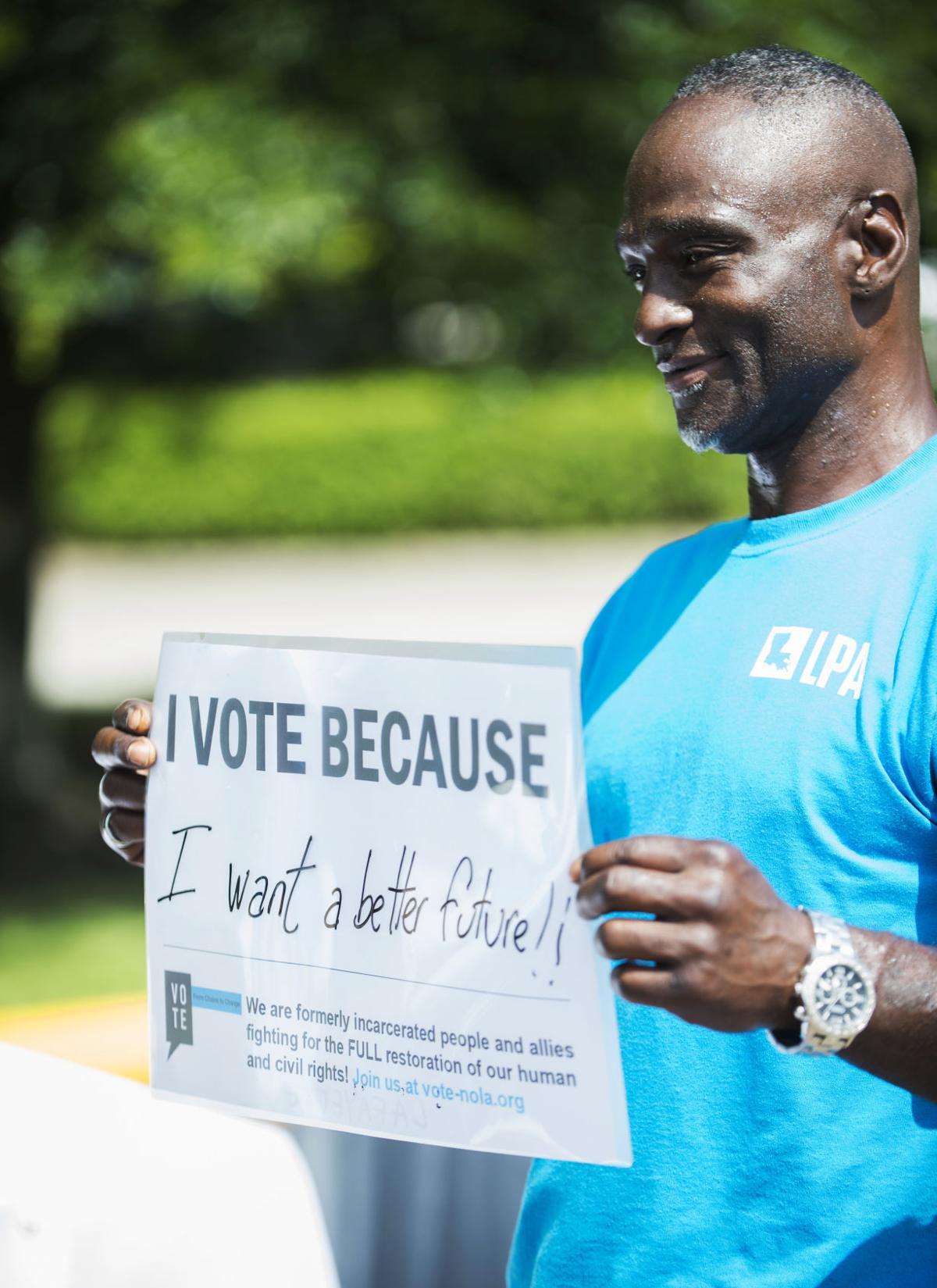 Lionel Dugas, who spent over eight years incarcerated, holds up a sign displaying his reason for voting during the Voice of The Experienced and Black Votes Matter tour of Louisiana to register formerly incarcerated people to vote Monday, July 1, 2019, near the Philadelphia Church in Lafayette, La. 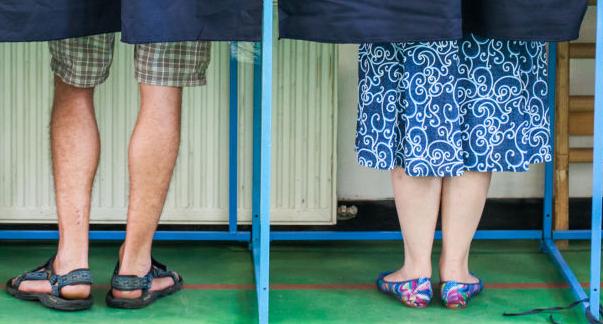 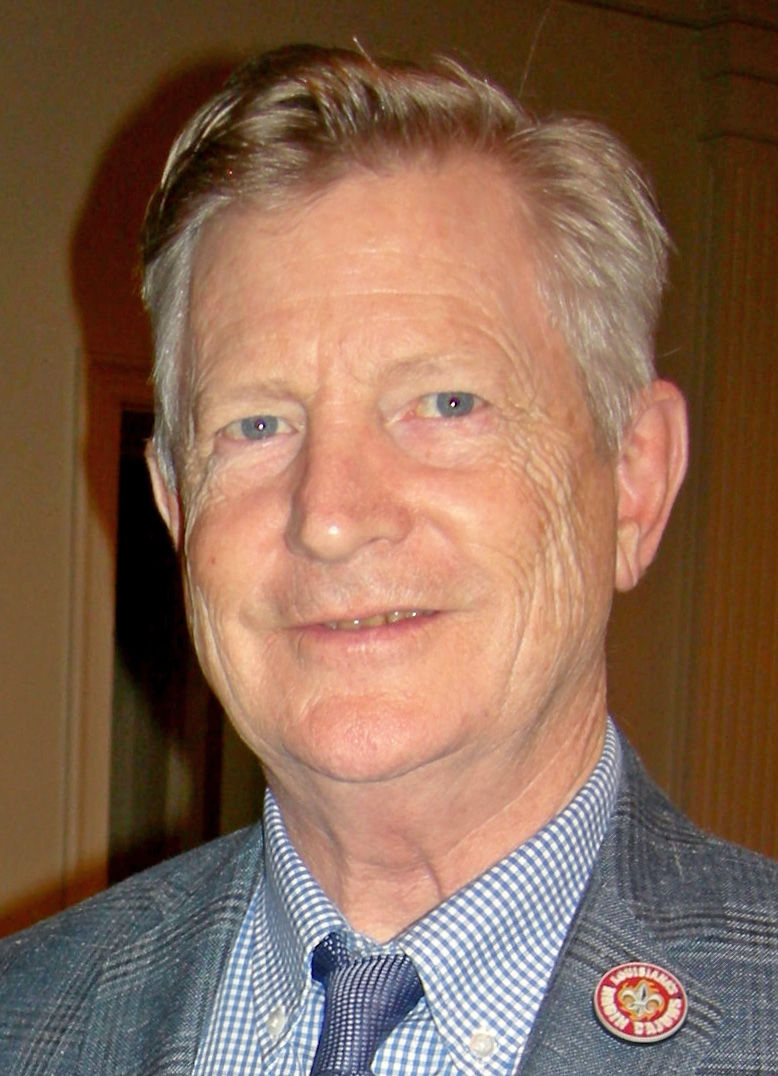 The races are set for Lafayette Mayor-President and the new Lafayette City Council and Lafayette Parish Council, with some last-minute qualifiers emerging to contest incumbents.

It's been established for some time that three Republicans and one no party candidate were in the race for mayor-president. But on the afternoon of the last day of qualifying Thursday, a Democrat joined the fray.

Pearson Cross, political scientist with the University of Louisiana at Lafayette, said he wasn't surprised that Harvin, an African-American Democrat, joined the race dominated by white Republicans.

Some have speculated Harvin was brought in "as a spoiler" to take votes from Alm-LaBar, the only non-Republican in the race. But Cross said he thinks Harvin is in the race to represent a demographic not represented by the other four candidates.

"I suppose that's a possibility and would occur to people," he said. "It's a function of a non-party primary."

For the first time since consolidation in 1996, voters in the city of Lafayette will be electing this fall their own five-person city council. In December, voters approved a Home Rule Charter amendment dissolving the nine-person city-parish council and creating separate city and parish councils.

Just when it appeared that a couple of incumbents — Bruce Conque and Liz Hebert — would make it onto the new Lafayette City Council unchallenged, opponents jumped into the race late Thursday.

Naquin served four years on the Lafayette City-Parish Council from 2012-16. Conque, who had previously held and vacated the seat to take a job with the Greater Lafayette Chamber of Commerce, reclaimed the city-parish council seat with a victory in November 2015 by less than 50 votes. Now it's Naquin trying to take the seat back from incumbent Conque.

Hebert, a Republican in her first term on the city-parish council, picked up opposition Thursday from a political unknown, Dr. James Noriega Jr., a foot surgeon and Republican. They're vying for the District 3 City Council seat.

City-Parish Councilwoman Nanette Cook, a Republican in her first term, faces opposition for the new City Council District 4 seat from Joyce Linde of Lafayette, a Republican known for her high-profile political activism with the Tea Party and now with Louisiana Citizens Action Network.

Only one incumbent city-parish councilman, Kevin Naquin, R-Duson, qualified to run for the new Parish Council. He has one opponent in the race for District 2, Ted A. Richard, a no party candidate.

Cross said he's not surprised the Republican incumbents drew opponents, especially Cook, whose challenger is prominent in Republican circles and is considered more conservative than Cook.

"I would say they're not happy with Nanette," Cross said. "Some think she's too locked into the progressive side of Lafayette or too moderate on taxation. They would probably say she's a RINO (Republican in Name Only) and a moderate."

Sept. 11 is the deadline to register to vote in person or by mail for the Oct. 12 election. Residents can register to vote online through the Louisiana Secretary of State's GeauxVote system through Sept. 21.