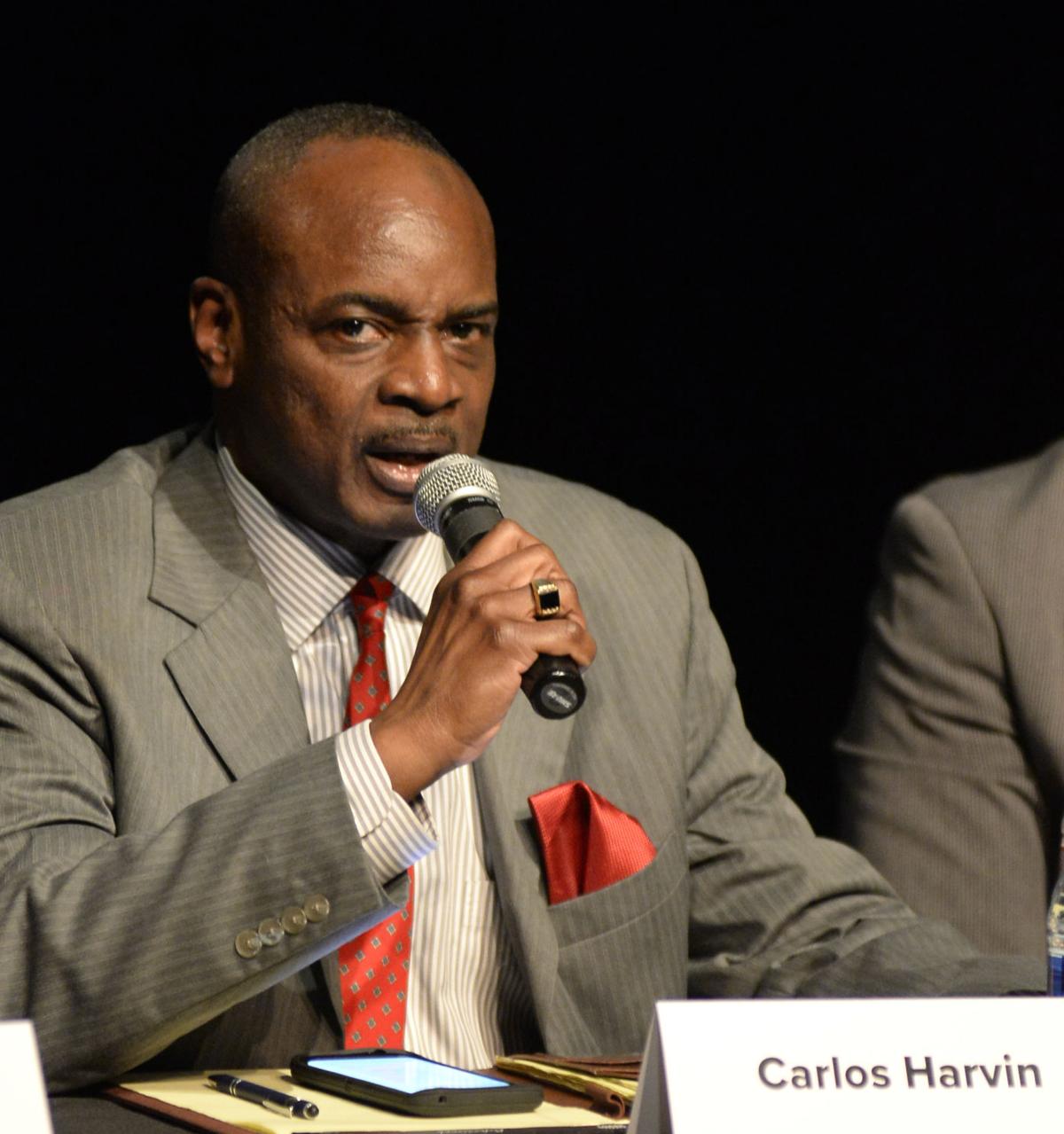 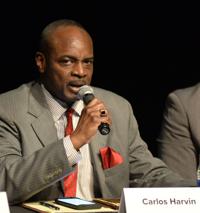 Carlos Harvin speaks during an election forum for candidates seeking the office of Mayor President of Lafayette on Tuesday, Sept. 24, 2019, at the Acadiana Center for the Arts. The forum was hosted by Downtown Lafayette. 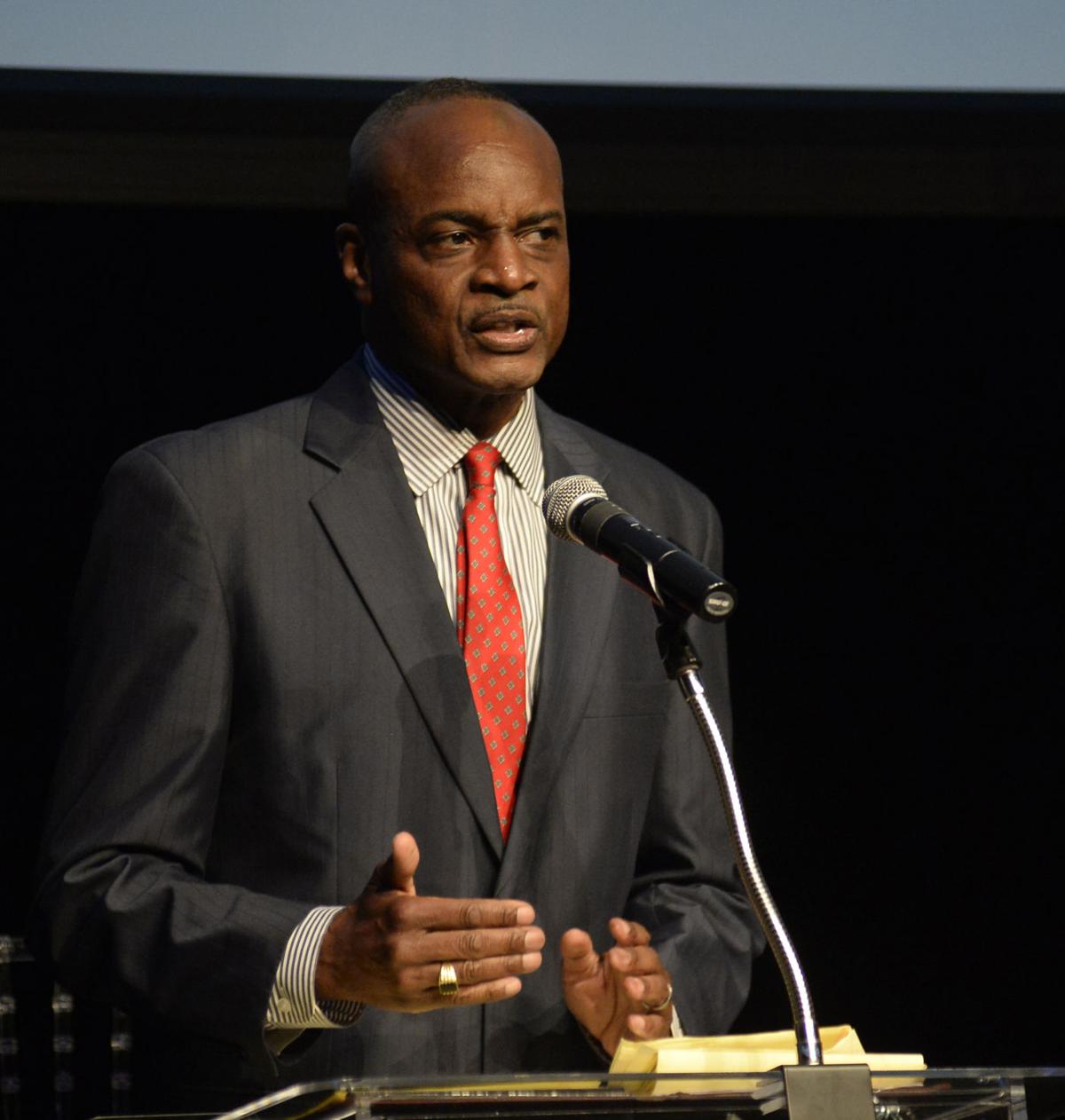 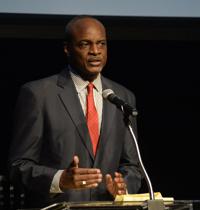 Carlos Harvin answers a question during a forum for candidates seeking the office of Mayor President of Lafayette on Wednesday, Sept. 18, 2019, at the Acadiana Center for the Arts. 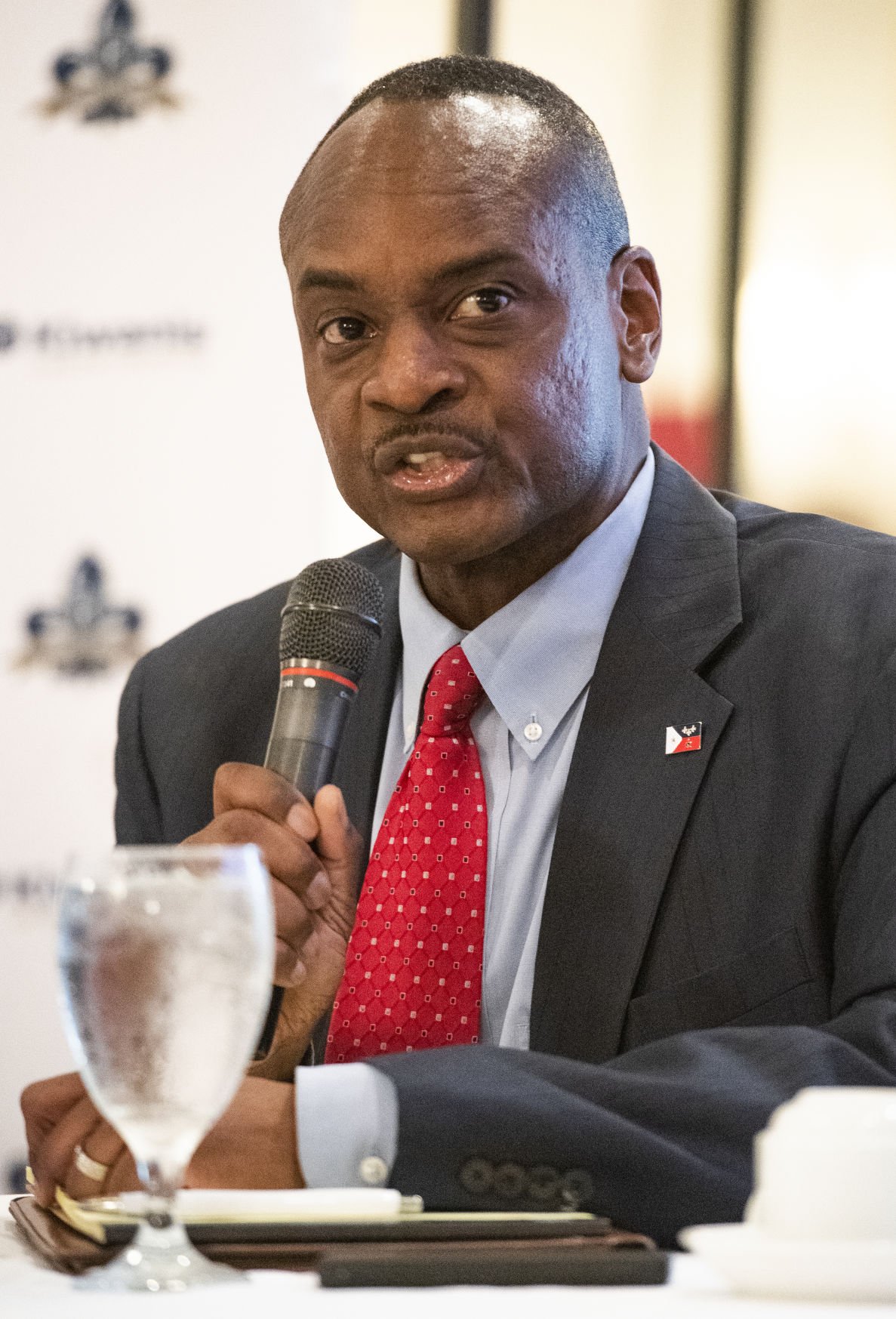 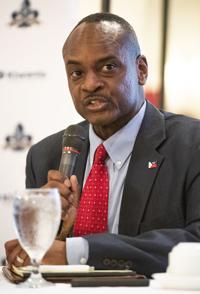 Carlos Harvin speaks during an election forum for candidates seeking the office of Mayor President of Lafayette on Tuesday, Sept. 24, 2019, at the Acadiana Center for the Arts. The forum was hosted by Downtown Lafayette.

Carlos Harvin answers a question during a forum for candidates seeking the office of Mayor President of Lafayette on Wednesday, Sept. 18, 2019, at the Acadiana Center for the Arts.

Carlos Harvin isn't like the other four candidates running for Lafayette mayor-president in the Oct. 12 election.

He's the only person of color in the race and the only Democrat facing three Republicans and a no-party candidate. He's the only candidate who lives in north Lafayette and he's a preacher who spent 5 to 6 years studying to be a Catholic priest.

Harvin's father worked for Immigration and Naturalization, so the family moved from Washington, D.C., to California, then Miami, San Juan, Puerto Rico and finally Fort Lauderdale, Florida. Right out of high school, he entered the seminary in Miami, earning a bachelor of arts in philosophy, then entered graduate studies at another Florida seminary before transferring to Catholic University in Washington, D.C., for a master of divinity degree. While there, he began questioning a lifelong commitment to celibacy required of Catholic priests.

Oct. 12 election in Acadiana: Here's everything you need to know about races, candidates

Today's primaries in the Acadiana area and across Louisiana are chock-full of major issues and races.

He left the seminary, taught at a Catholic high school one year and worked in youth ministry for the Archdiocese of Washington five years, Harvin said. While there, he met George Stallings, a priest who spoke against the church for closing five Catholic African-American high schools in Washington. Stallings split from the Roman Catholic Church, Harvin said, and formed the Imani Temple African American Catholic Congregation, where celibacy was an option. Harvin's calling returned and he was ordained in 1991 as a priest in the Imani church.

Harvin moved to Lafayette in 1993 and helped form Imani Temple No. 49. He later left Imani and is pastor of the non-denominational New Beginnings Church, while selling life insurance and preparing for his license to handle retirements and investments.

As a pastor, Harvin said, he met Mayor-President Joel Robideaux when he was first running for the office. Later, they met to discuss the needs of the northside. The church, he said, was looking at redeveloping Northgate Mall to include its sanctuary, an early learning center and an event center, and was in beginning talks with the owners and manager. Then, in April, Robideaux announced he would not seek reelection.

"Just like I got my call to ministry," Harvin said, "this voice, this urge inside me said, 'You run.'"

He ignored it. His father had just died and Harvin was considering running for the City Council seat being vacated by City-Parish Councilman Kenneth Boudreaux. On the final day to qualify for the Oct. 12 election, a friend called to prod him.

One of Harvin's missions as mayor-president is to communicate, team-build and try to unite the divided city and parish. There are six municipalities in the parish along with unincorporated areas that share some concerns such as drainage and sewerage, and there are issues that are more important to one area than another, he said.

In his first 90 days as mayor-president, Harvin said he wants to convene a city-parish summit with leaders from the municipalities and others, including law enforcement, educators, faith leaders and business owners to discuss their top goals for the next 4 to 5 years, setting priorities, discussing what it will cost and getting them started.

"Let's build some businesses that are going to give them a reason to come from the southside to the northside," Harvin said, "so we're no longer seen as a house divided."

Lafayette Parish, especially the northside of the city, needs 5,000 to 10,000 new residents to increase the tax base. Additional revenue from property and sales taxes will allow Lafayette Consolidated Government to undertake projects to make the city and parish more attractive for families and businesses. He suggested a temporary tax that ends on a specific date, like the airport tax to build a new terminal or a Tax Increment Financing district tax that was implemented for a retail center on Louisiana Avenue at Interstate 10.

Instead of an elevated Interstate 49 Connector through Lafayette, Harvin supports a ground-level grand boulevard. An elevated freeway will become a gathering place for the homeless like in New Orleans, he said.

Harvin wants to make Lafayette a destination, not just a city that motorists pass by. The Northgate Mall, because of it's strategic location, could be the economic engine to help revive north Lafayette, he said. Officials need to approach more retail establishments, talk to Magic Johnson about a movie theater and the owners of establishments like Dave and Busters to make the mall an entertainment destination, he said. Maybe a second or third floor could be added to the mall for residences for senior citizens. Nearby, empty property along Castille could be developed for mixed-income townhouses with government incentives, he added.

The Lafayette Economic Development Authority and OneAcadiana, Harvin said, can play a role in attracting new business and industry, and government can offer more tax incentives if they create enough jobs. They should be looking to expand in medicine, entertainment, energy and IT, he said, suggesting the addition of a medical facility such as a specialty hospital near I-10 and I-49 that would serve a regional population.

Harvin acknowledges he has had some personal financials problems. Court records show his car was repossessed in 2015, he was sued in 2012 for not paying a credit card (the case was dismissed) and another lawsuit is pending for failing to pay a debt consolidation loan. He said he is scheduled to meet with that company's attorney soon to resolve the debt.

Harvin said he fell behind when he left a job to start his own business and his income decreased. His car was repossessed after he was laid off from a reorganization and he is still without a car.

"I think that shows I can identify with folks that have come up against financial hardships in their life due to a job layoff, not through their own fault," Harvin said. "This has made me sensitive to folks who are working hard, the working poor, and still have trouble making it. It sensitized me to how easy a person can fall on hard times."

His experience, he said, will help motivate him to attract good-paying jobs to the area for struggling families.

Harvin has not filed detailed campaign finance reports on the race. Candidates for mayor-president are not required to file the detailed reports unless they have received a contribution in excess of $200 from one source or spent more than $5,000 on their campaign.

Four of the five candidates for Lafayette mayor-president submitted campaign finance reports as of Thursday in the Oct. 12 election.

As the owner or investor in six real estate franchises, Nancy Marcotte says she employs about 1,000 people.