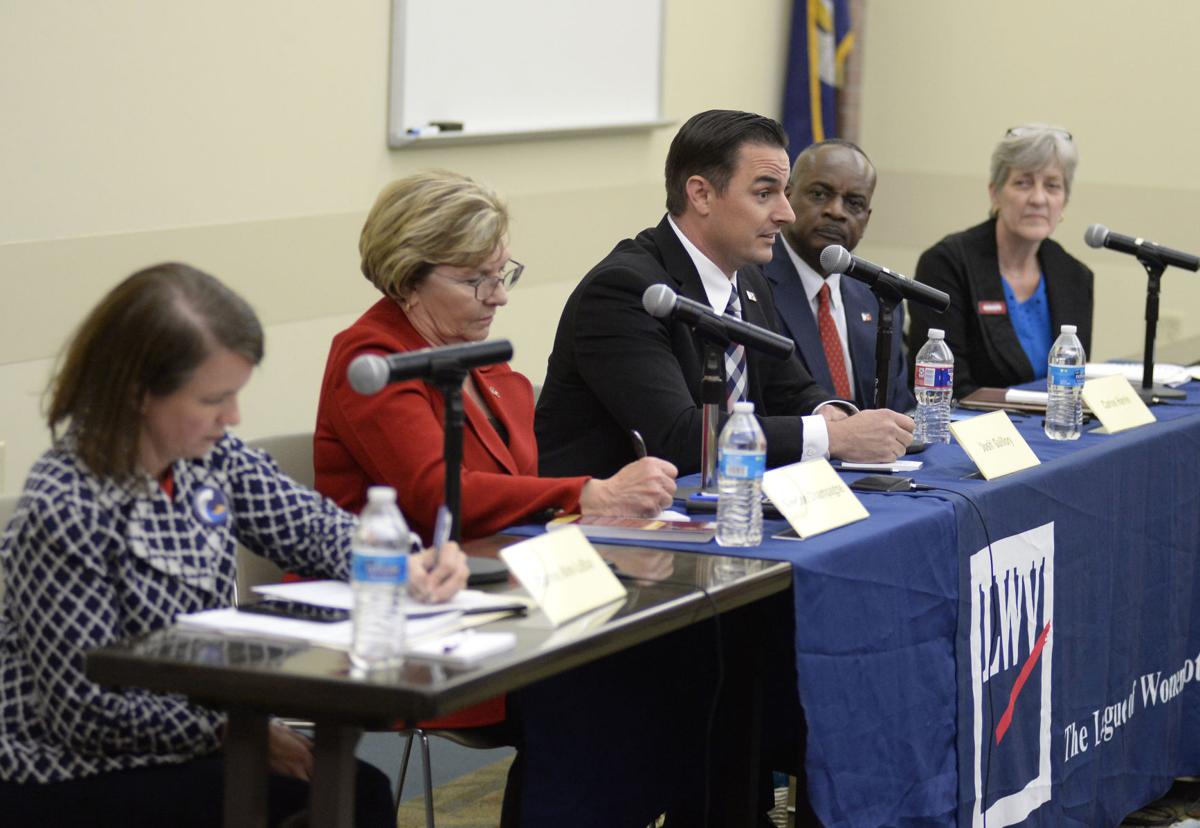 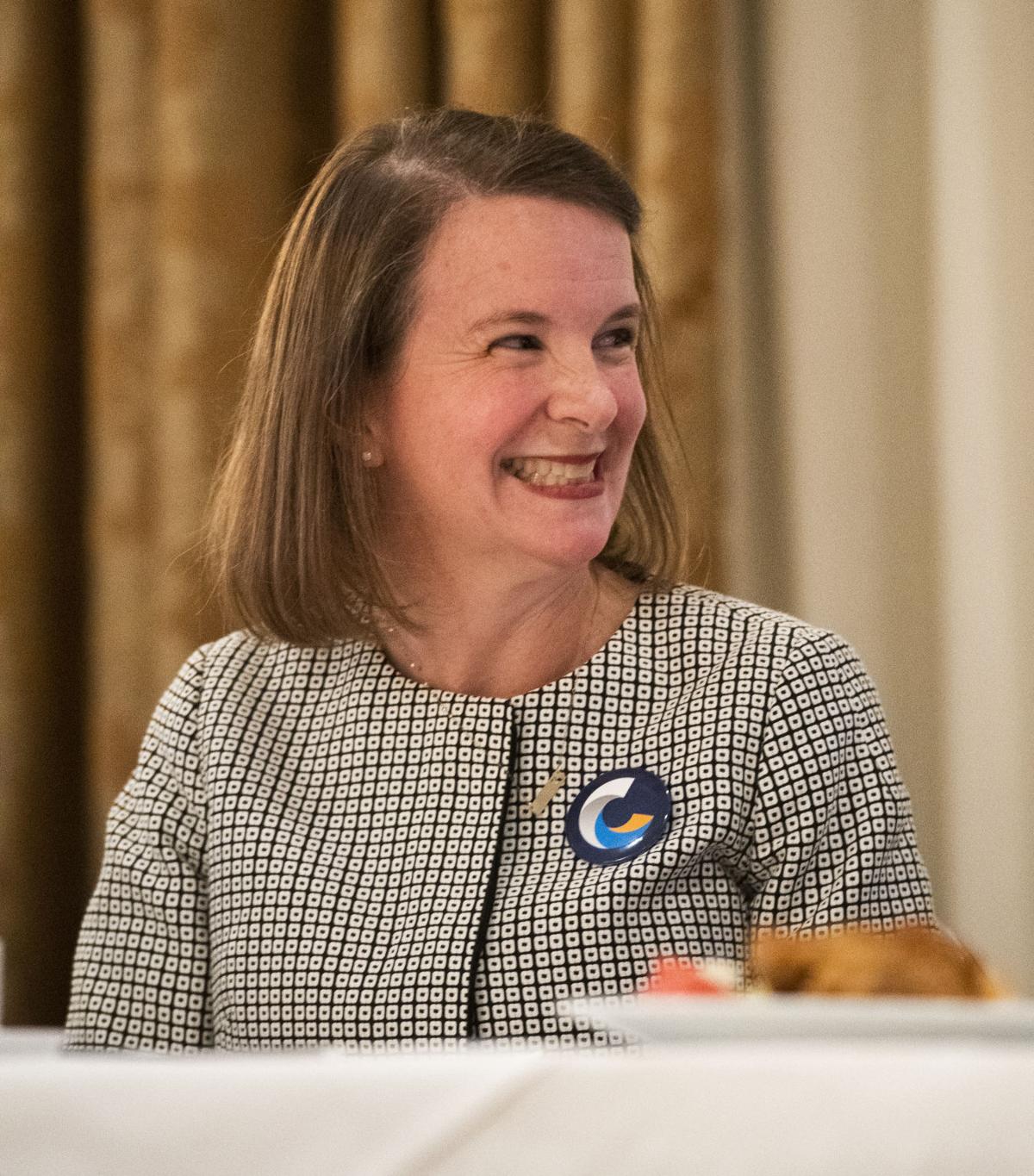 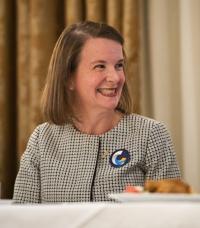 Carlee Alm-LaBar, a candidate for Lafayette mayor-president, is shown during the Kiwanis of Lafayette Candidate Forum at the Petroleum Club on Tuesday, Sept. 10, 2019, in Lafayette, La. 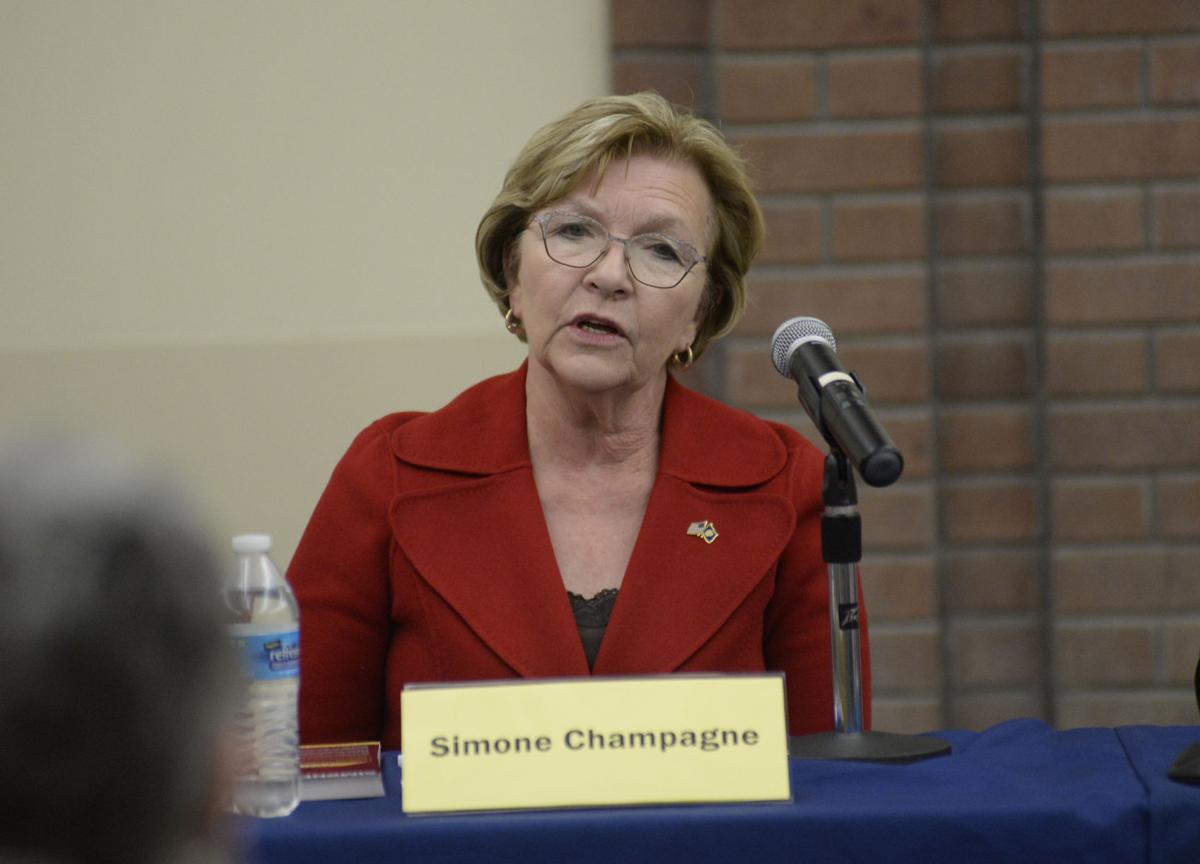 Simone Champagne speaks during a forum for candidates seeking the office of Lafayette mayor-president on Thursday, Sept. 5, 2019, at the downtown Lafayette public library. 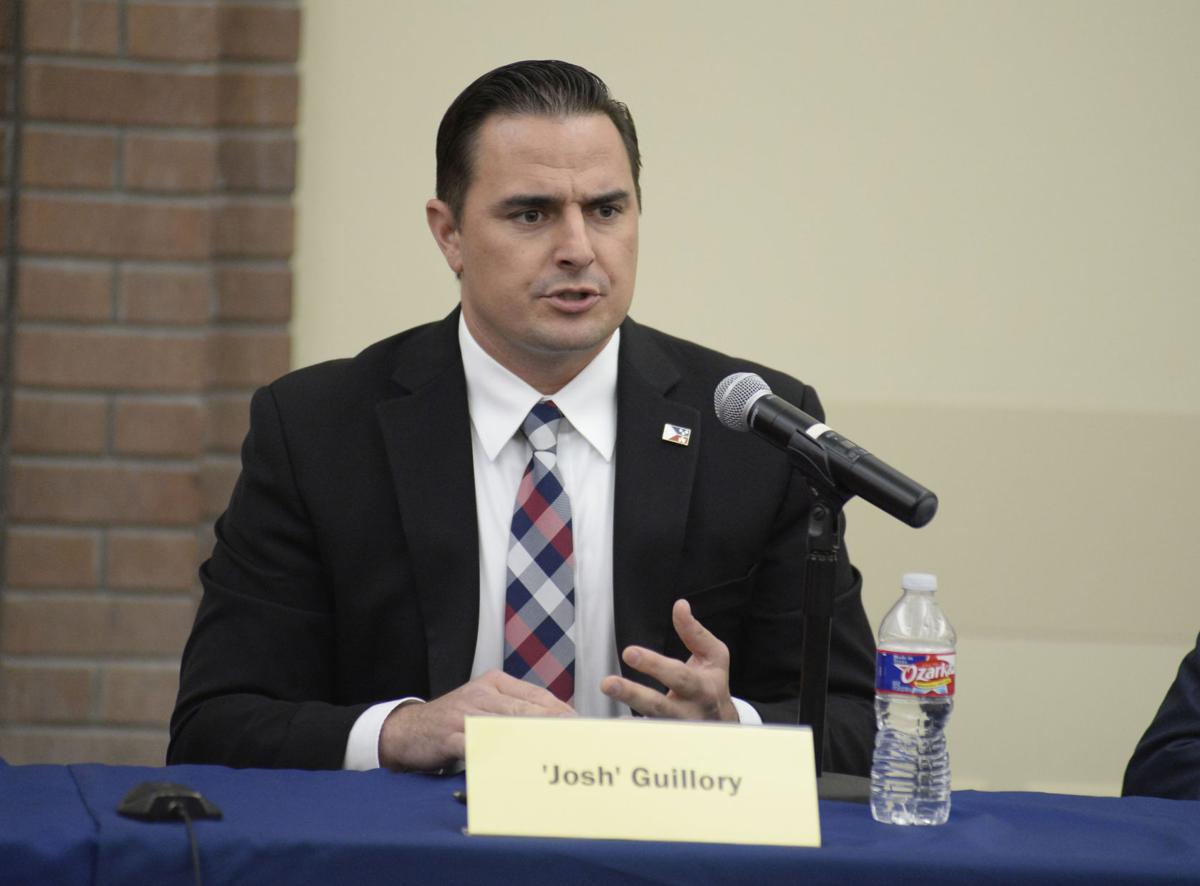 Josh Guillory speaks during a forum for candidates seeking the office of Lafayette mayor-president on Thursday, Sept. 5, 2019, at the downtown Lafayette public library. 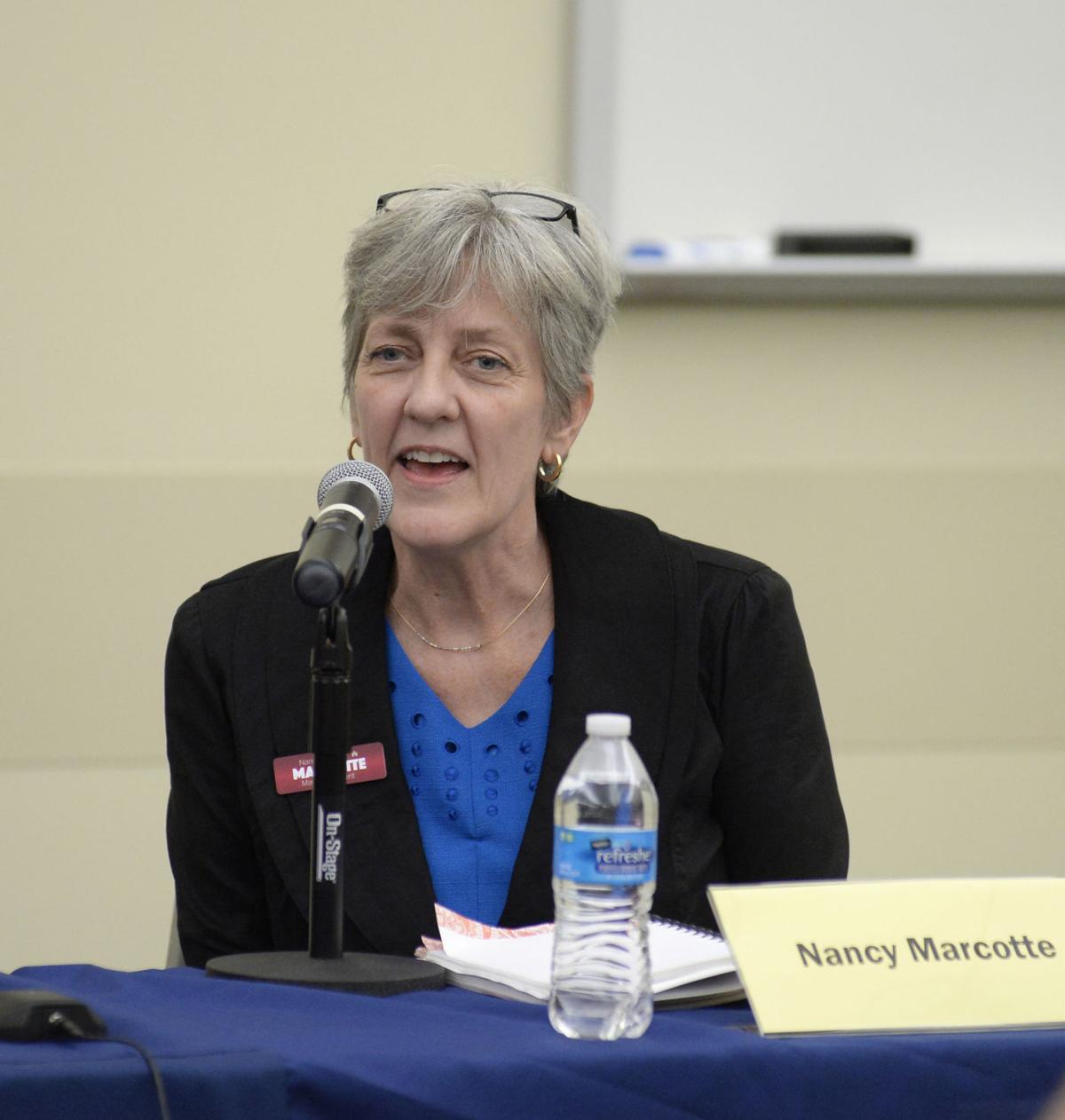 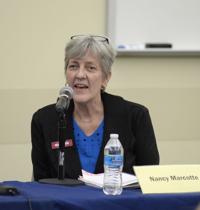 Nancy Marcotte speaks during a forum for candidates seeking the office of Lafayette mayor-president on Thursday, Sept. 5, 2019, at the downtown Lafayette public library. 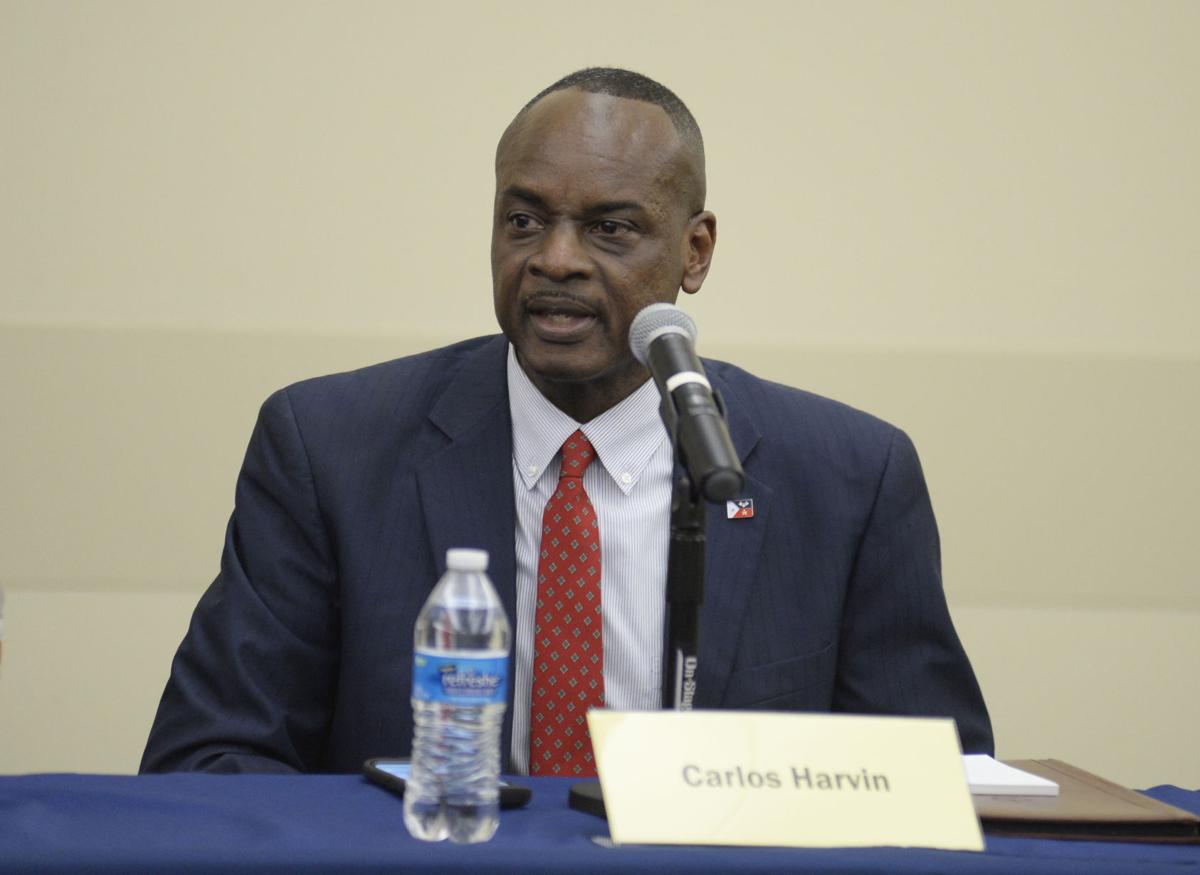 Carlos Harvin speaks during a forum for candidates seeking the office of Lafayette mayor-president on Thursday, Sept. 5, 2019, at the downtown Lafayette public library.

Four of the five candidates for Lafayette mayor-president submitted campaign finance reports as of Thursday in the Oct. 12 election.

Campaign finance reports filed 30 days before an election offer a look at which people, companies and political action committees are putting money behind which candidate.

Those donating to campaigns are limited by the level of the office the candidate is seeking. In the case of Lafayette mayor-president, which is considered a district level position, the limit is $2,500, according to Kathleen Allen of the Louisiana Ethics Administration.

Carlee Alm-Labar, a no-party candidate from Lafayette, received a total of about $160,000 from more than 60 donors who each gave the maximum $2,500 to her campaign as of Sept. 2.

People and companies associated with Southern Lifestyle Development contributed the maximum $2,500 each to Alm-LaBar's campaign. They include owners Robert Daigle and Rodney Savoy; La Savoy Famille, a Savoy family trust; RR Co., of which Savoy and La Savoy Famille are officers; and The Scott Co., of which Savoy is an officer. Alm-LaBar resigned from Southern Lifestyle Development to run her campaign.

Carlee Alm-LaBar, the no-party candidate for Lafayette mayor-president, outpaced her opponents in raising money for her campaign, according to…

DesOrmeaux Group, a fundraising company, was paid nearly $16,000 for its work thus far.

Alm-LaBar was instrumental in developing a comprehensive plan for Lafayette and unincorporated areas called Plan Lafayette, while at LCG. She was on committees involved in the Interstate 49 Lafayette Connector and Evangeline Thruway Redevelopment Team.

In 2018, Alm-LaBar was a lead in the Fix the Charter movement that pushed for passage of a home rule charter amendment approved by voters Dec. 8, splitting the city-parish council into separate city and parish councils.

Champagne, a former administrator for the Iberia Parish government who served seven years in the Louisiana Legislature before resigning in December 2014 to take a job as city administrator for Youngsville under Mayor Ken Ritter, who donated $1,000 to her campaign.

How much did Kishbaugh, SOS charter lawsuit cost taxpayers?

Brave New Politics of Denham Springs received from Chamagne $8,900 for consulting web design, social media and graphic design between June and July, her campaign finance report shows. Brave New Television of the same Denham Springs address received $1,491 from Champagne's campaign in August for "agency fees." Chris Comeaux is the manager/officer, according to the Louisiana Secretary of State Office.

Lunsford, Citizens for a New Louisiana being investigated by state Board of Ethics

The Louisiana Board of Ethics is conducting a confidential investigation into Citizens for a New Louisiana, a conservative anti-tax organizati…

He was a director in Citizens for a New Louisiana, with Michael Lunsford, but is no longer listed as a director by the Secretary of State's Office. Comeaux was an administrator of the Facebook page for Lafayette Citizens Against Taxes, which changed its name this year to Citizens for a New Louisiana that is run by Lunsford, who is a paid executive director, a resident of Breaux Bridge in St. Martin Parish and chairman of the St. Martin Parish Republican Party.

Lunsford and Citizens for a New Louisiana are under investigation by the Louisiana Board of Ethics for violating the state's campaign disclosure laws.

Josh Guillory, a Republican from Lafayette, is an attorney who previously served in the military, including the war in Iraq. He ran an unsuccessful 2018 campaign to unseat Higgins from the U.S. House of Representatives. Rudy Giuliani, former New York City mayor and then-personal lawyer for President Donald Trump, visited Lafayette to throw his support behind Guillory.

The state Ethics Administration website Sunday showed Alm-Labar had a total of $270,480 in contributions for a four-month period ending Sept. 2, while Champagne had taken in $44,150 and Guillory had collected $41,047. The figures do not include in-kind contributions or loans.

Nancy Marcotte, a Republican from Lafayette, is the broker of three Keller Williams real estate franchises and an investor in three others across the South.

The largest contribution Marcotte received was $5,000 from the Louisiana Realtors Political Action Committee. The contribution appears to be in compliance with campaign rules that allow a "big PAC" to donate up to $5,000 to a mayor-president candidate. A committee is classified as a "big PAC" when more than 250 of its members contributed more than $50 to the PAC during the previous calendar year, according to the ethics administration website.

Marcotte receive $2,500 donations from Keller Williams Realty Acadiana; and Charlotte Ducote, Ramon Fonseca and Dale Pointiff, of Virginia; and $1,250 donations from Dana Pontiff, of Georgia, and Oleg Mikhailov, of California.

Contacted by The Acadiana Advocate on Friday, Harvin said he thought he could submit a written copy of the report but learned after the deadline that it has to be filed electronically.

(This story has been updated to indicate Carlee Alm-LaBar resigned from Southern Lifestyle Development to run her campaign for mayor-president).