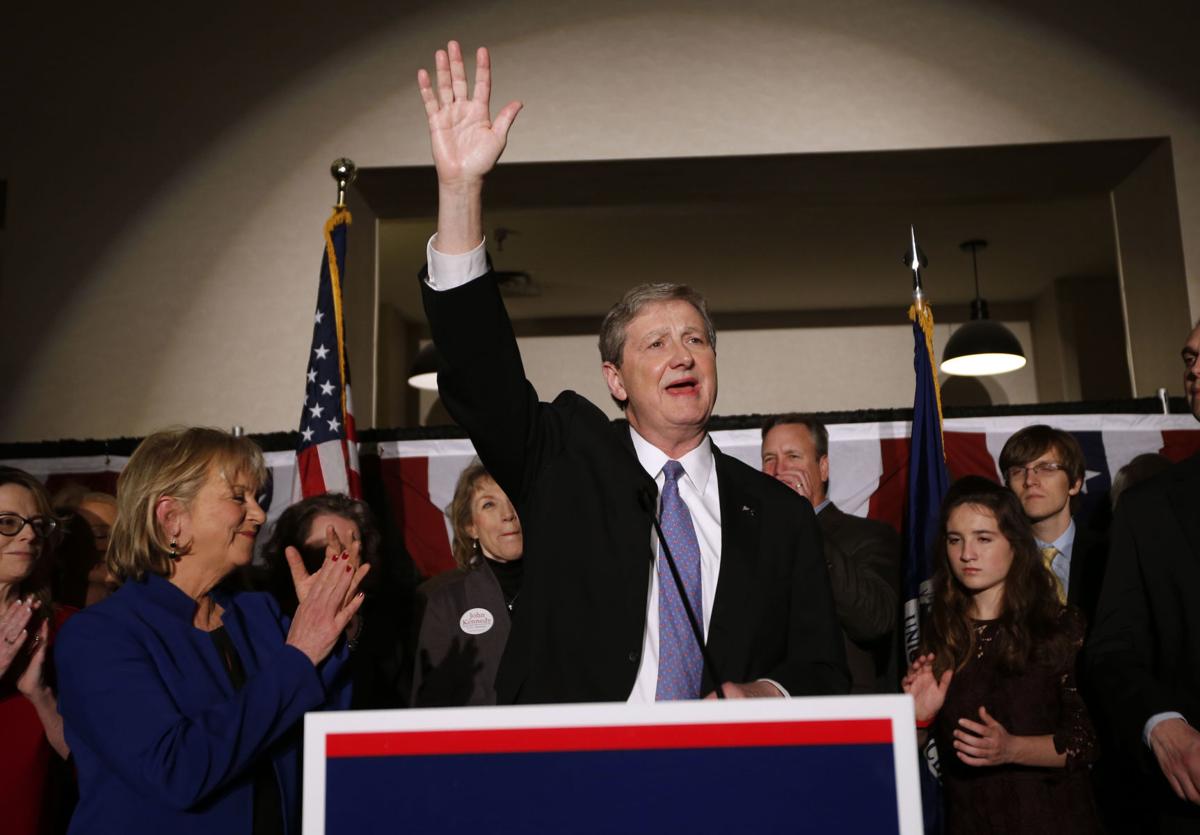 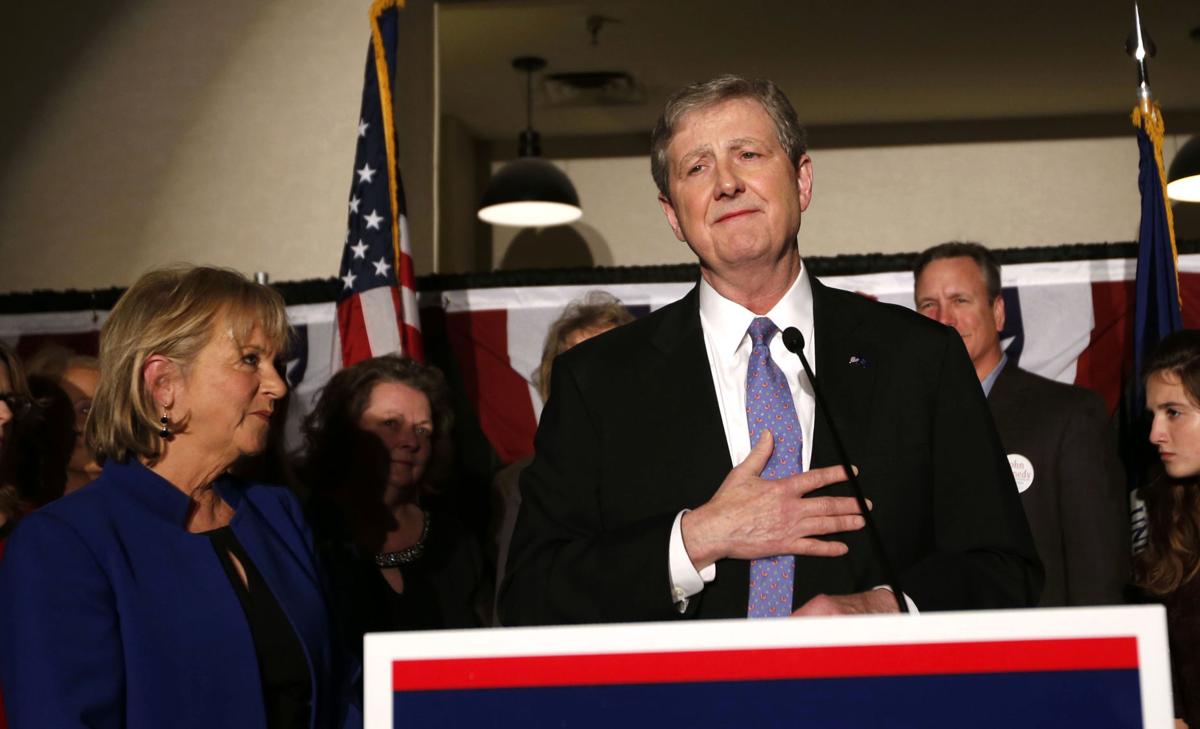 John N. Kennedy was sitting in his state treasurer’s office several years ago one afternoon when he mused about his future.

Kennedy had been winning elections to be treasurer since 1999, but he had lost two attempts to win a U.S. Senate seat. Kennedy, a Republican, made it clear that he hadn’t given up.

“I think I got one more good statewide race in me,” he told a visitor.

Kennedy won his third try for the U.S. Senate on Saturday, crushing Foster Campbell, a Democrat who is one of the five elected members of the Public Service Commission. Kennedy won 60.6 percent to Campbell’s 39.4 percent.

Republican John Kennedy won a seat in the U.S. Senate in a lopsided victory Saturday, finall…

Kennedy will replace Sen. David Vitter, a Republican who chose not to seek a third term after losing last year’s governor’s race.

In a phone interview with reporters Sunday, Kennedy said he will travel to Washington on Wednesday to learn about his new job and doesn’t plan to resign as treasurer immediately.

He said his first priority will be securing more federal dollars for flood victims in Louisiana.

Over the past 17 years as treasurer, Kennedy has earned a reputation in Baton Rouge as a man who is willing to challenge governors and state legislators on their spending plans, regardless of party, and as a result doesn’t win much traction for his ideas. Kennedy said Sunday that he has been effective in Baton Rouge and will continue with his maverick style.

Former Sen. Mary Landrieu, a Democrat who defeated Kennedy in 2008, said in a text Sunday that he “has the potential to be an effective senator, if he will put his good mind to help identify and fix problems as opposed to just being a critic in chief.”

Kennedy came across as folksy during the campaign, in part because his political advisers got him to slow down his way of speaking. But he’s a policy wonk at heart and showed that Sunday as he mentioned obscure government reports he has read and ideas on how to cut federal government spending.

Kennedy’s 60.6 percent meant he out-performed the 57 percent that Republicans have averaged in statewide elections over the past decade, said Michael Henderson, an LSU political scientist.

Kennedy’s extra-strong result among white voters explains why he outperformed Bill Cassidy, a Republican, when Cassidy trounced Landrieu in 2014. Cassidy won the race overall, 56 percent to 44 percent, and got 78 percent of the white vote to Landrieu’s 22 percent.

Kennedy also out-performed Donald Trump when he won 58 percent of the vote in Louisiana on Nov. 8 against Hillary Clinton.

Saturday’s result and the other recent statewide elections reflect how Gov. John Bel Edwards’ victory last year was an anomaly.

“John Bel Edwards was a good candidate who faced a Republican field in disarray that did not unite behind its nominee during the runoff,” said Couvillon. “That disunity did not repeat itself in the Senate runoff this year.”

In the 2015 primary, Vitter savagely attacked his Republican rivals, Public Service Commissioner Scott Angelle and Lt. Gov. Jay Dardenne, and got payback during the runoff. Angelle stayed neutral in the Edwards/Vitter runoff while Dardenne crossed party lines to endorse Edwards.

Vitter also endorsed Kennedy during the runoff and was among the few elected officials who attended his successor’s election night party at the Embassy Suites Hotel in Baton Rouge. Also attending were his chief of staff, Luke Bolar, and Kyle Ruckert, who headed one super PAC funded by Kennedy that attacked Boustany and Fleming and another that attacked Angelle. He lost his race Saturday to Clay Higgins to represent Acadiana in the U.S. House of Representatives.

“David Vitter came out a winner,” Couvillon said. “Kennedy was his preferred candidate, and he exacted revenge against Scott Angelle in the congressional runoff.”

Kennedy led the race from start to finish. In a 24-candidate field, his toughest challenge came from Boustany, who represents Acadiana, and Fleming, who represents the Shreveport area.

Kennedy held them off in the primary, running first with 25 percent to 15.5 percent for Boustany and 10.5 percent for Fleming. He also limited two far-right Republicans – Rob Maness and David Duke – to 5 percent and 3 percent, respectively.

Kennedy started out strong in polls because of high name recognition from having mounted eight statewide races over the past 25 years, losing bids to be attorney general in 1991 and to the Senate in 2004 and 2008 and winning five races to be treasurer, beginning in 1999.

Kennedy has won high marks among voters as a fiscal watchdog, railing over the years against spending by Kathleen Blanco, when she was the Democratic governor, and Bobby Jindal, when he was the Republican governor. He sharply criticized proposals by Edwards to raise revenue this year by increasing the state sales tax and trimming business tax breaks. Critics of his noted that as treasurer, Kennedy didn’t have to offer his own plan to balance the budget or a realistic plan on how to cut spending.

Roy Fletcher, a veteran Republican media consultant, said he noticed a shift in Kennedy’s message during the Senate election, about three weeks before the primary election.

“His TV [ads] moved to become more Trump-like, talking about trade and immigration,” Fletcher said. “That kept anyone from moving to his right. I think that was the critical part of his campaign.”

Fletcher guesses that Kennedy embraced Trump politically to keep Fleming, who has had a very conservative voting record in the U.S. House, from occupying that position.

So Kennedy talked tough in one ad, saying that “if you join Isis or Al-Qaeda, you sign your own death warrant. You hit us, we’ll hit you back twice as hard. And your buddies. And your goat.”

Then came the softer part. “No goats were harmed during the filming of this commercial,” read a tagline on the screen.

Kennedy got his start in politics when Buddy Roemer, after winning the governor’s race in 1987, appointed him to serve as executive counsel.

“We were told there was this exceptionally bright attorney in New Orleans and that we needed to talk to him,” said Len Sanderson, then Roemer’s transition director and now a public affairs strategist in Washington. “We sat down with John and were immediately impressed. He had a deep passion for the state and was bright and energetic.”

After losing the attorney general’s race in 1991, Kennedy returned to practicing law and also served as a lobbyist. He managed Roemer’s gubernatorial campaign in 1995, which failed.

The winner, Mike Foster, surprised observers by picking Kennedy to be the secretary of the Department of Revenue, which oversees the state’s tax system.

“If Mike could give second chances and pick up an intelligent player, he would do so,” said Stephen Perry, Foster’s transition director. “Mike really gave John the opportunity to restart his public career.”

In 1999, Kennedy resigned to challenge Ken Duncan, the incumbent treasurer seeking reelection. Kennedy won handily and cruised to re-election four more times. In 2007, three years after endorsing John Kerry, the Democratic presidential candidate, Kennedy became a Republican. He recently said that he didn’t leave the party, the party left him.

With the exception of the Baton Rouge mayor's race and the 3rd Congressional District contest, Saturday's runoff elections didn't carry a whol…

John Kennedy celebrated his election to the U.S. Senate Saturday in typical politician style: at a hotel, with an open bar and food for donors…

Congress convened for its 115th session on Tuesday, with three new Louisiana Republicans taking the oath of office for the first time.

Just two years into his first term, U.S. Sen. Bill Cassidy has risen from back-bencher to the senior senator from Louisiana — a distinction th…