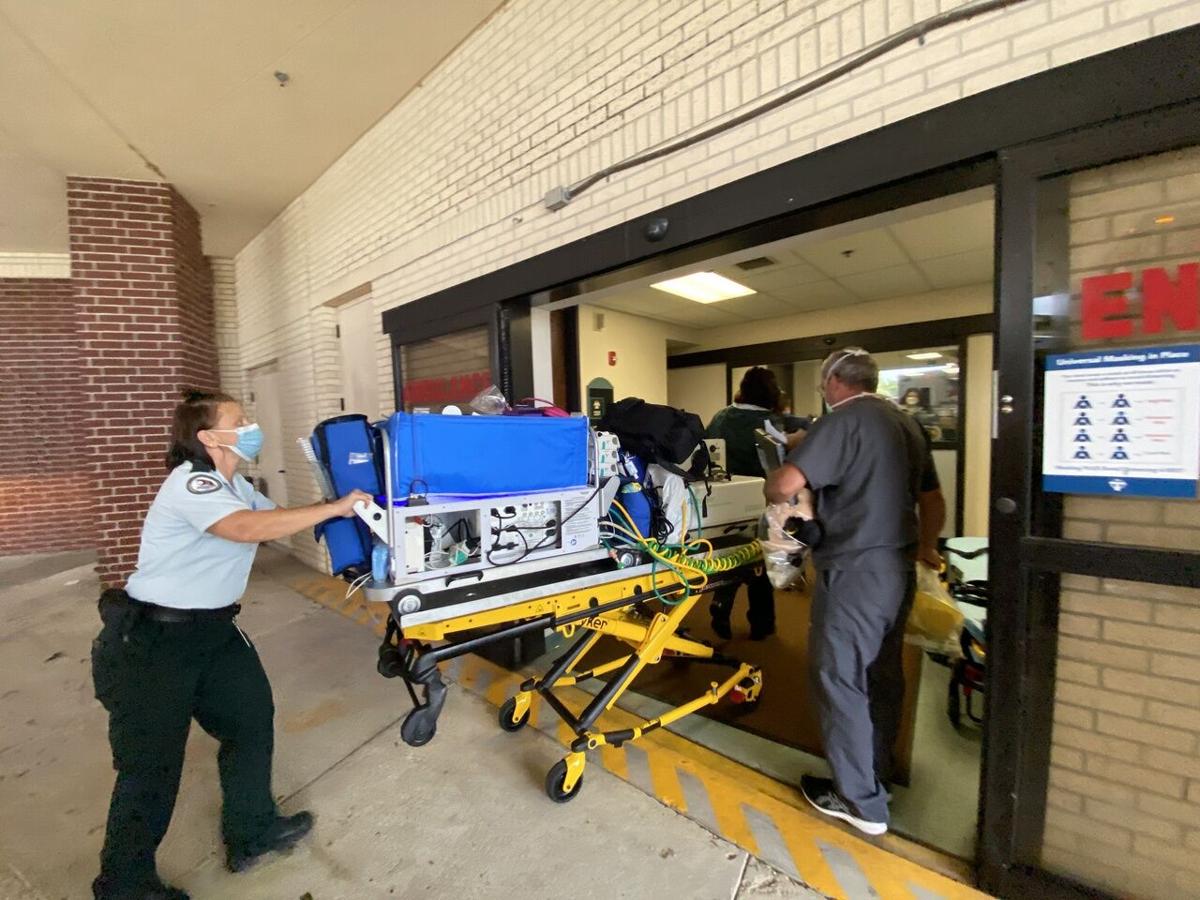 An infant is evacuated to Our Lady of Lourdes Women's and Children's Hospital in the aftermath of Hurricane Laura. 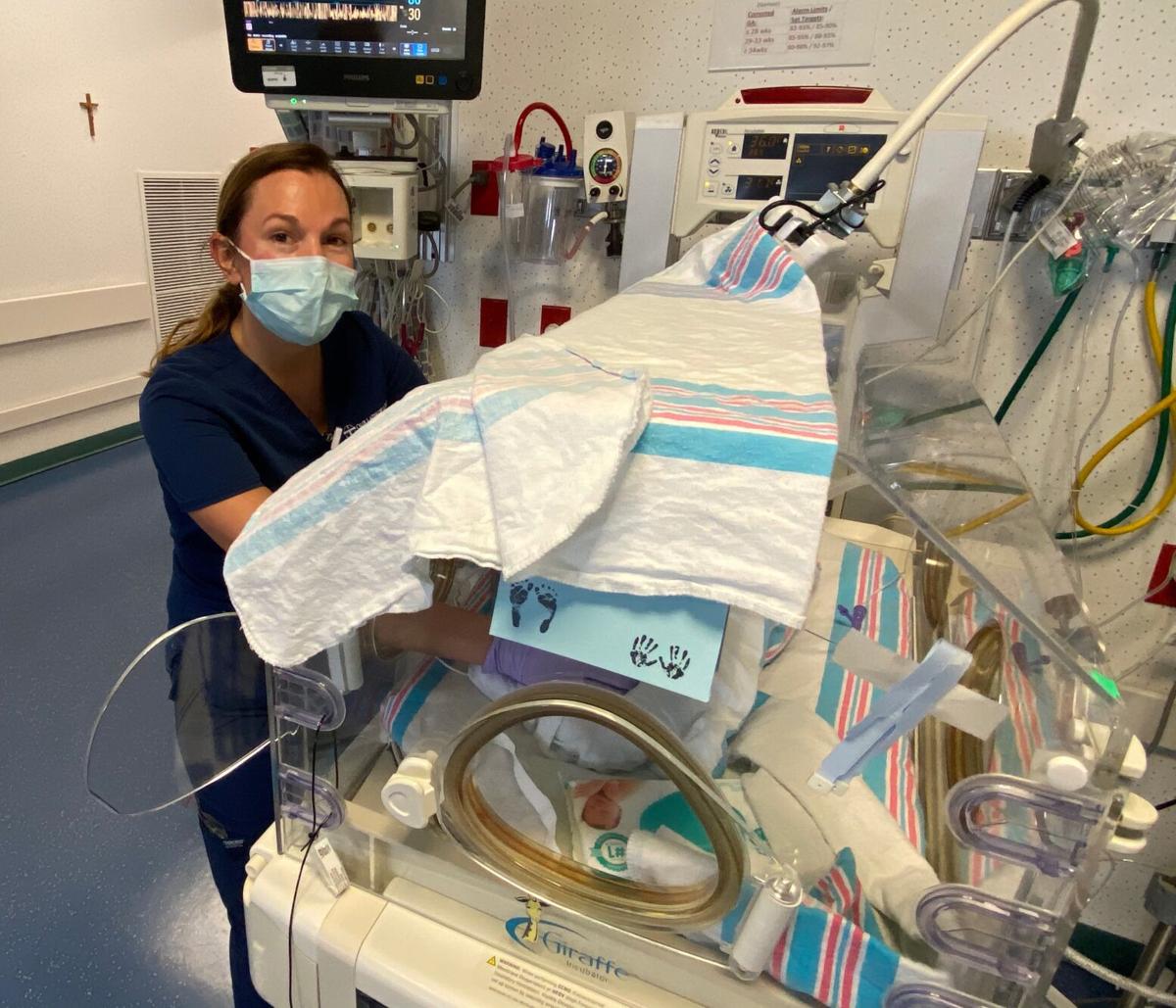 Our Lady of Lourdes NICU nurse Ashley Judice cares for an infant in the Our Lady of Lourdes Women’s and Children’s Hospital’s NICU in Lafayette on Friday, Aug. 28, 2020. Judice was one of several health care workers who helped evacuate NICU babies. 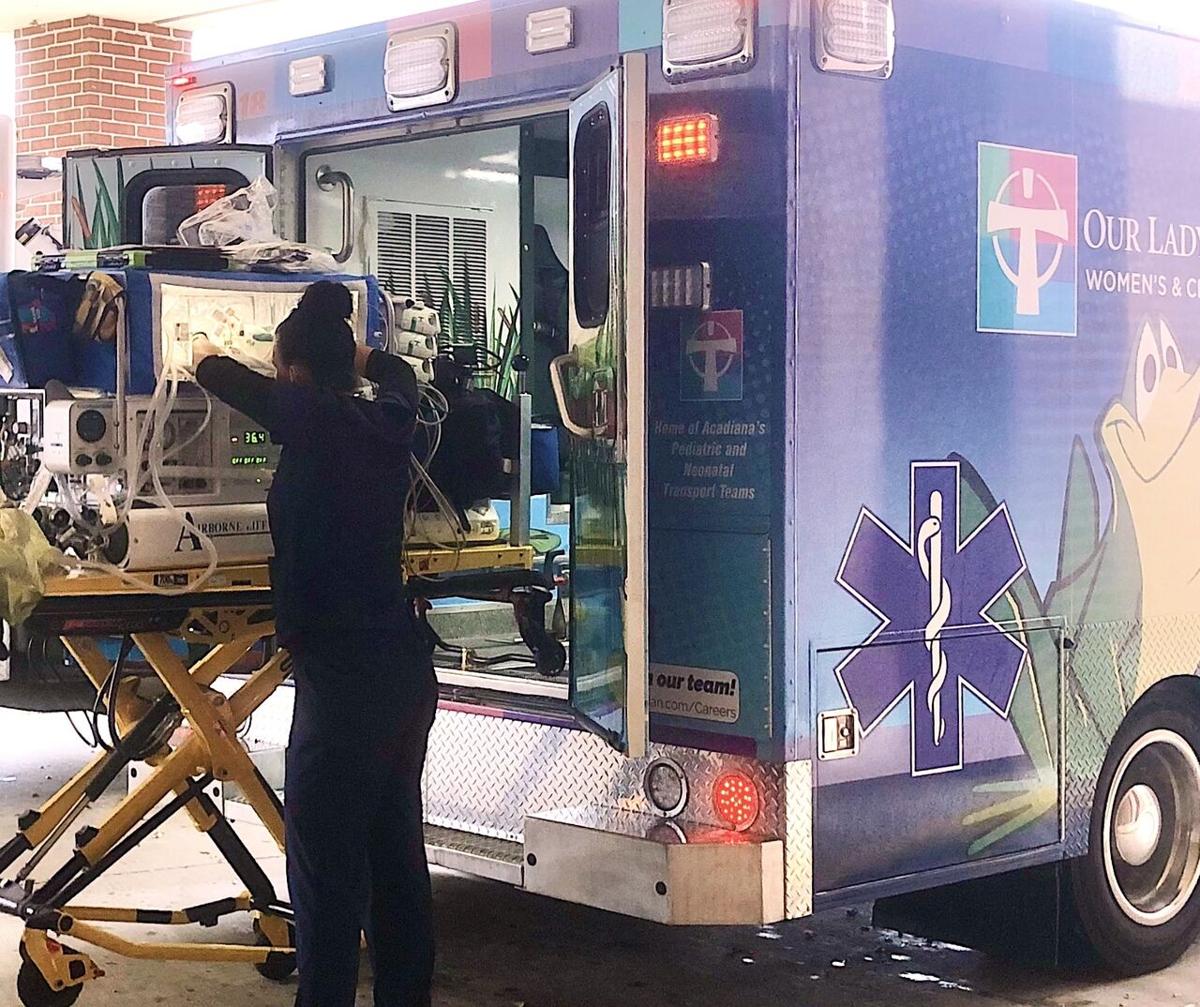 An infant is evacuated to Our Lady of Lourdes Women's and Children's Hospital during Hurricane Laura. 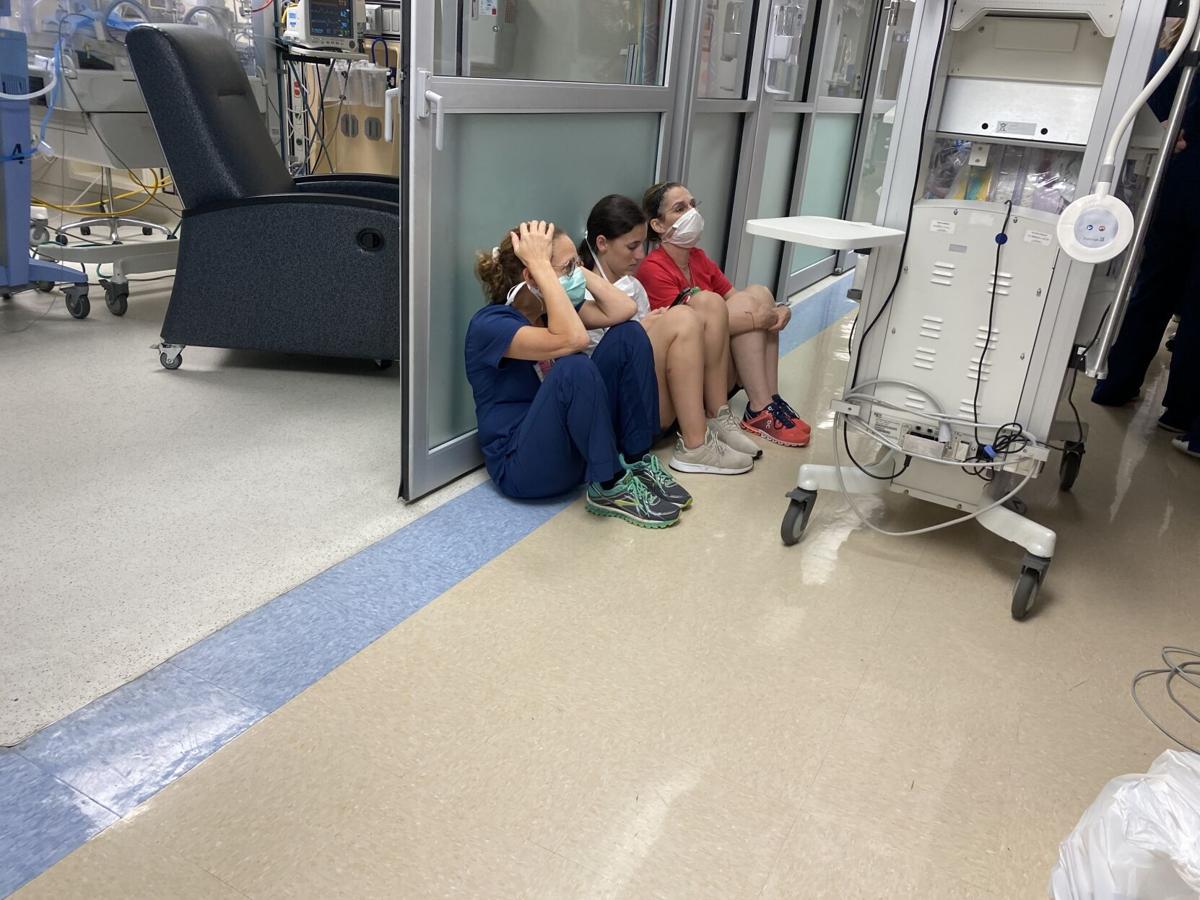 From left: RN Sherry Joubert, Lexie Reed and Michelle Langley crouch in a hallway of Lake Charles Memorial after evacuating 19 NICU babies to the main campus because of Hurricane Laura. 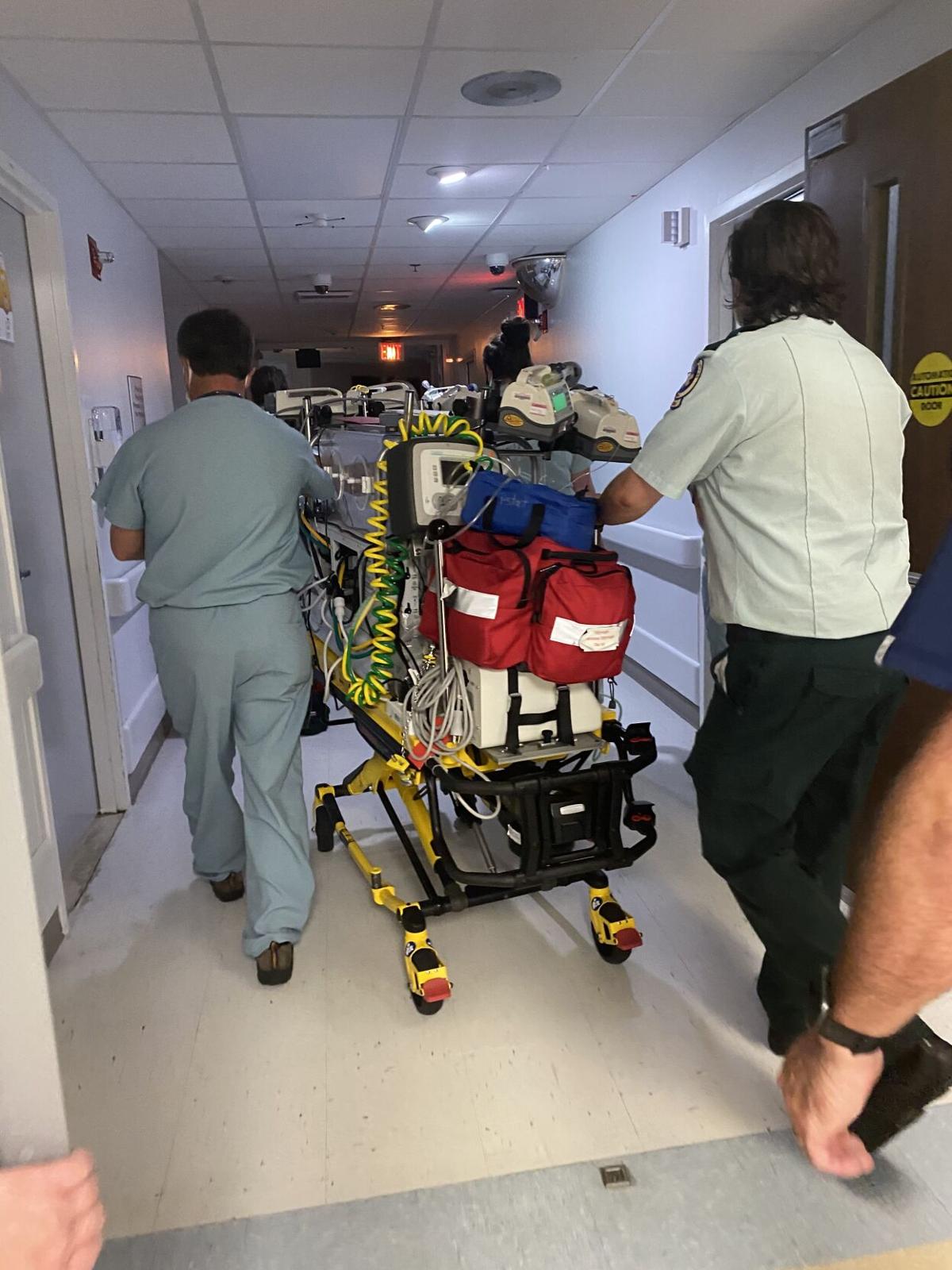 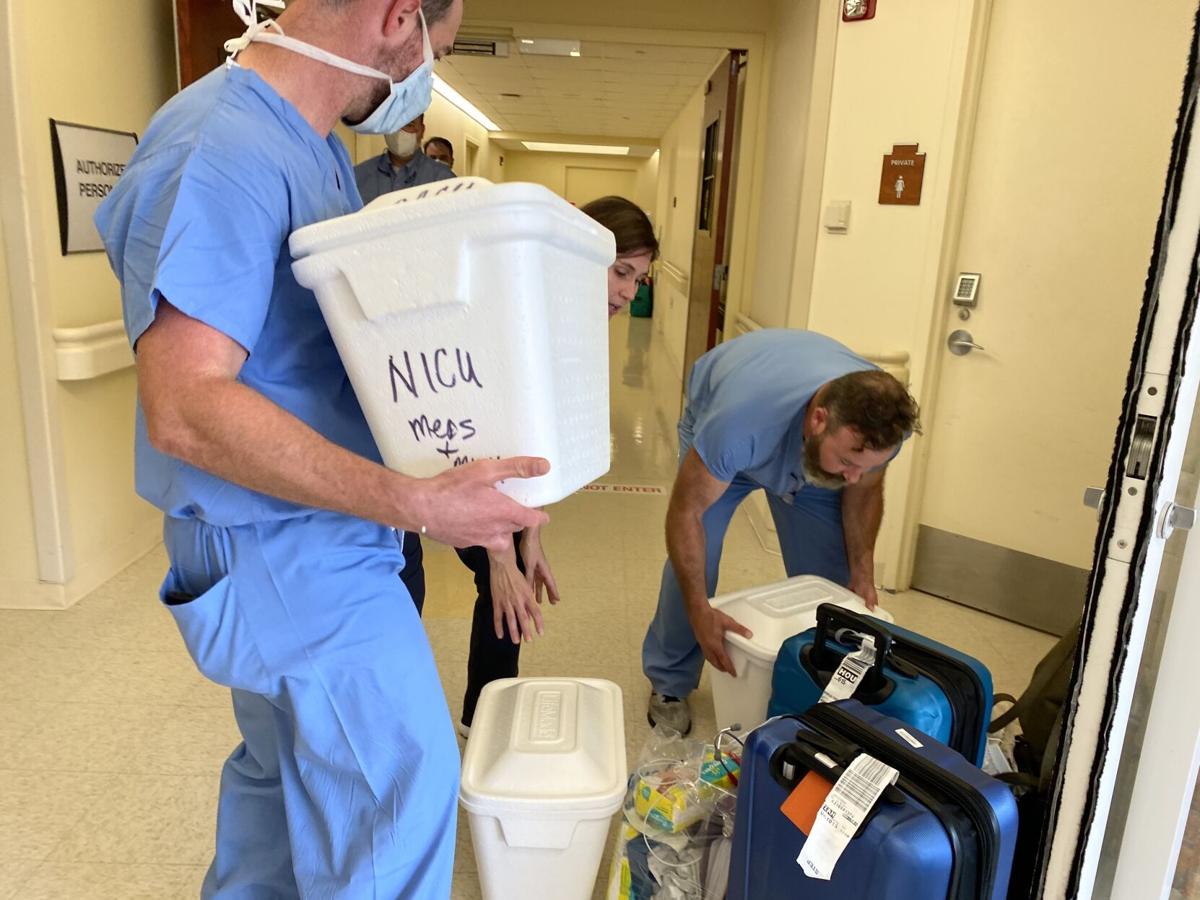 Lake Charles Memorial Hospital staff transfer medicine in the race to evacuate babies in the NICU during Hurricane Laura.

An infant is evacuated to Our Lady of Lourdes Women's and Children's Hospital in the aftermath of Hurricane Laura.

Our Lady of Lourdes NICU nurse Ashley Judice cares for an infant in the Our Lady of Lourdes Women’s and Children’s Hospital’s NICU in Lafayette on Friday, Aug. 28, 2020. Judice was one of several health care workers who helped evacuate NICU babies.

An infant is evacuated to Our Lady of Lourdes Women's and Children's Hospital during Hurricane Laura.

From left: RN Sherry Joubert, Lexie Reed and Michelle Langley crouch in a hallway of Lake Charles Memorial after evacuating 19 NICU babies to the main campus because of Hurricane Laura.

Lake Charles Memorial Hospital staff transfer medicine in the race to evacuate babies in the NICU during Hurricane Laura.

As her ambulance unit passed downed trees and whooshed through standing water, Our Lady of Lourdes neonatal intensive care unit nurse Ashley Judice was thinking of babies in Lake Charles.

Judice said she tried not to let herself get distracted by the devastation they passed; her mind focused on the task at hand. Would the baby need respiratory support, an IV or blood products, she considered, as she ran through a checklist in her head and prepared for what lie ahead.

“I was more worried about the babies and what baby I was picking up and what they would need. I was preparing myself for what I might be walking into …My priority was making sure that baby was delivered safely to our hospital,” Judice said.

The nurses and health care workers at Lake Charles Memorial were similarly single-minded. Lake Charles Memorial Hospital for Women NICU Director Leah Upton said emotions were high among the team as people feared for their families and homes as dire reports flooded in about the projected “unsurvivable” storm surge and severe conditions ahead of Hurricane Laura’s landfall.

For Upton, the moment of dread came when she awoke at 4:45 a.m. Wednesday to start finalizing the team’s plan B with hospital administrators and saw the updated storm projections. The initial plan was to remain at the Women’s campus and, if water inundated the building, evacuate the babies to the building’s modest second floor area and provide oxygen and other needed therapies manually.

They were confident in the building’s Category-4 storm rating, but by 3 p.m. Wednesday regional emergency officials told the team to evacuate the babies to the main hospital, fearing possible flooding.

“I think a lot of the tears and fear came before the storm that morning before it all happened. The anticipation, fear of the unknown and not knowing what’s going to happen," Upton said. "But once we started evacuating those babies, all the nurses, all the staff put their fears aside and we just put our heads down and got to work. We put comforts aside, put our sleep aside and everybody just took care of these babies."

It was all hands on deck – night nurses were woken up, doctors and teams were called in from other departments, emergency officials and deputies with the Calcasieu Parish Sheriff’s Office came in to clear roadways, provide trailers and a U-Haul to move equipment and supplies.

It can take an hour to move one baby across town between hospital campuses on a normal day, Upton said, and they needed to move 19 babies.

They got it done in two and a half hours, she said.

Families received calls about the swift move once the infants were secure on the main hospital campus and Upton and staff assured the families they would protect the babies like their own children.

“They had to put a lot of trust in us to care for these infants during this time,” she said.

Once settled in the pediatric wing on the sixth floor at Lake Charles Memorial, the night didn’t stop. The team of 14 nurses, three respiratory therapists and two administrators spent the night caring for the infants and contending with the hurricane, sopping up puddles of water with towels, listening to the windows rattle and the building shake in the wind, and propping mattresses in front of windows with heavy chairs in case they shattered as tornado warnings signaled, she said.

The power and water cut out in the night and the electricity switched over to generator power, fueling the babies’ needed machines. The staff used bottled water to wash their hands and collected rain water in buckets to flush the toilets.

Through it all, the babies were unfazed.

“The babies didn’t even realize there was a storm. They did better than us,” Upton said.

Lake Charles Memorial Hospital, the largest hospital in southwest Louisiana, eventually evacuated 146 patients after Hurricane Laura damaged the city’s water infrastructure so badly the facility warned it may be weeks before water service is restored. The facility relies on the city for water to help air condition the facility and sterilize equipment.

“We just can’t function as a hospital without water,” said Matt Felder, a spokesman for the hospital. He added the hospital will still have some “limited” emergency room services.

The dire water situation was confirmed at 1 p.m. Thursday and Upton and staff immediately began calling facilities in Baton Rouge, Lafayette and New Orleans to transfer their patients, arranging their second evacuation in less than 24 hours. Staff moved IV fluids into syringes, bottled medications and formula, copied charts and packed the babies’ belongings for their next leg of travel, Upton said.

They even printed each baby’s name, their parents’ names and phone number on cards or pieces of tape and affixed it to their onesies to ensure they were always identified, she said.

Despite the grueling last 36 hours, the men and women at Lake Charles Memorial were determined and kind when the transport teams arrived, Judice said. Dripping sweat behind their face masks in the heat, they still had smiles on their faces, were helpful, calm and giving their best while seeing the babies off to new health centers.

The group showed grace and grit during the hurricane’s onslaught and aftermath, Judice said.

By 11 p.m. Thursday the final transport took Lake Charles Memorial’s last two NICU infants to other south Louisiana hospitals. There was a profound sense of relief knowing they had done the job, Upton said.

“In this situation whenever everyone is afraid, stressed and separated from families, the staff came together, supported one another and relentlessly took care of these babies to do what was best for them. I could not be more proud of them,” she said.

Woman’s Hospital in Baton Rouge is taking in patients from two Lake Charles area hospitals in the aftermath of Hurricane Laura.