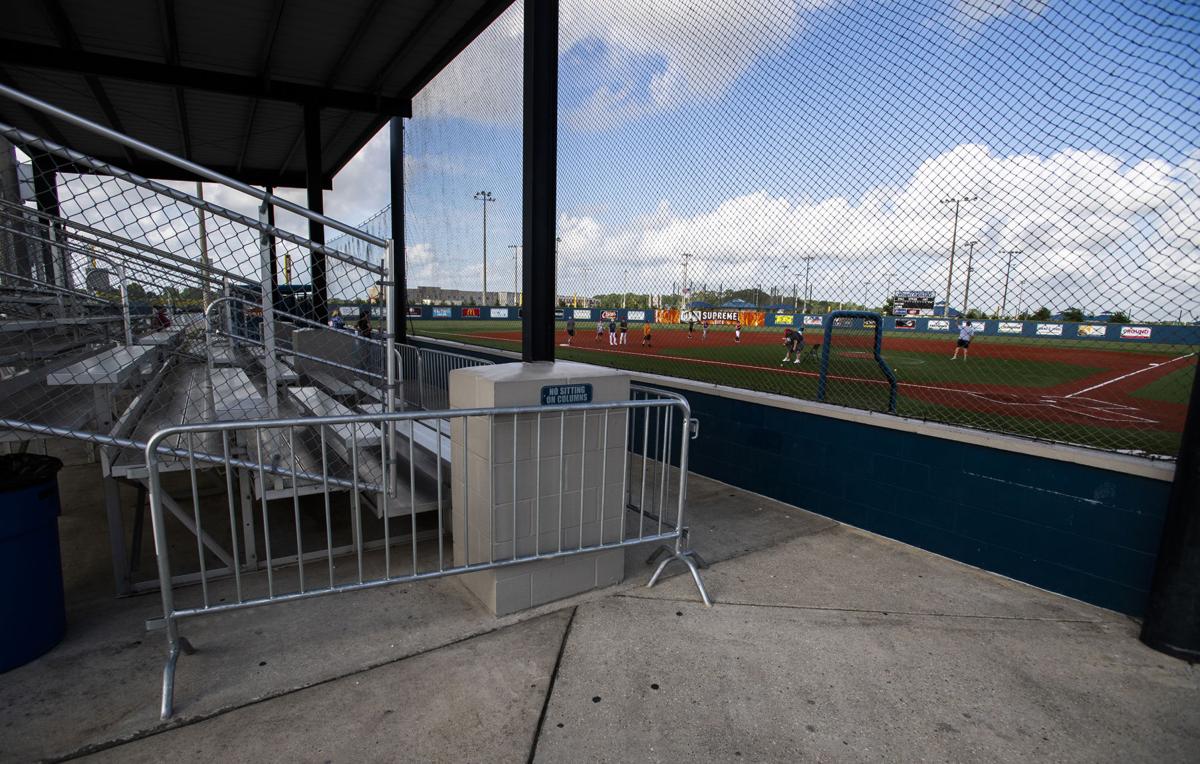 The bleachers were closed at the Youngsville Sports Complex for last weekend's first travel ball tournament weekend. Erath, meanwhile, completely removed its bleacher from the complex. 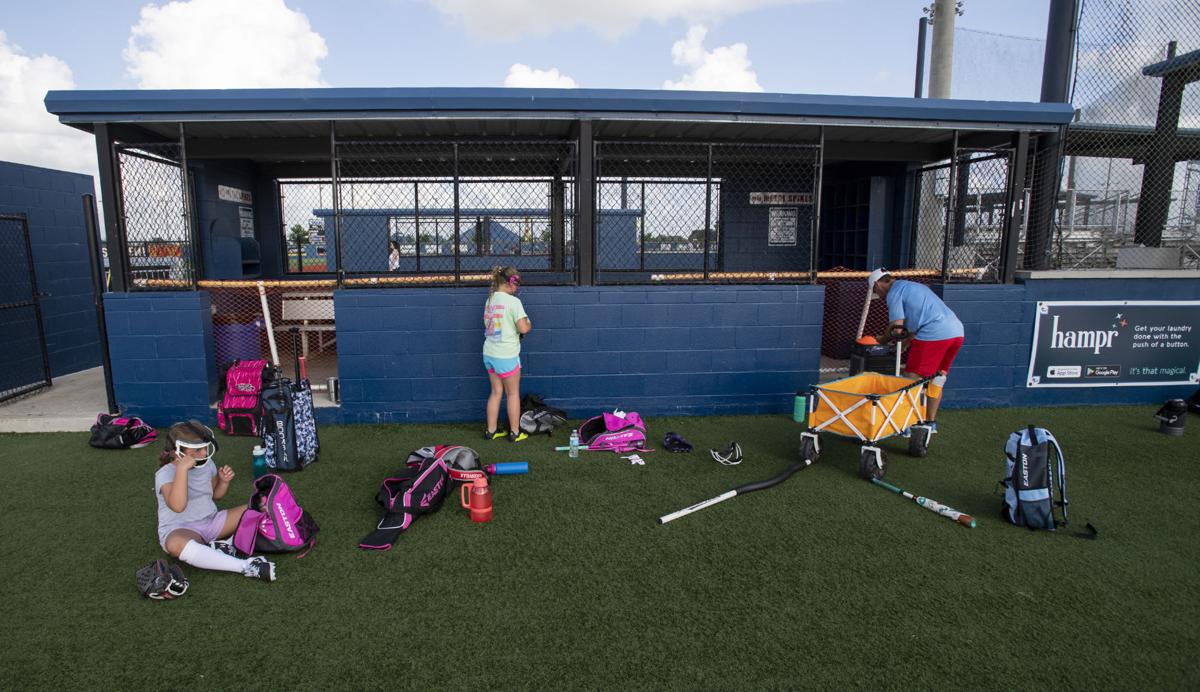 On the first weekend of travel ball around the area over the Memorial Day holiday, dugouts were either closed - like here in Youngsville - or had a limit of people having access to it. 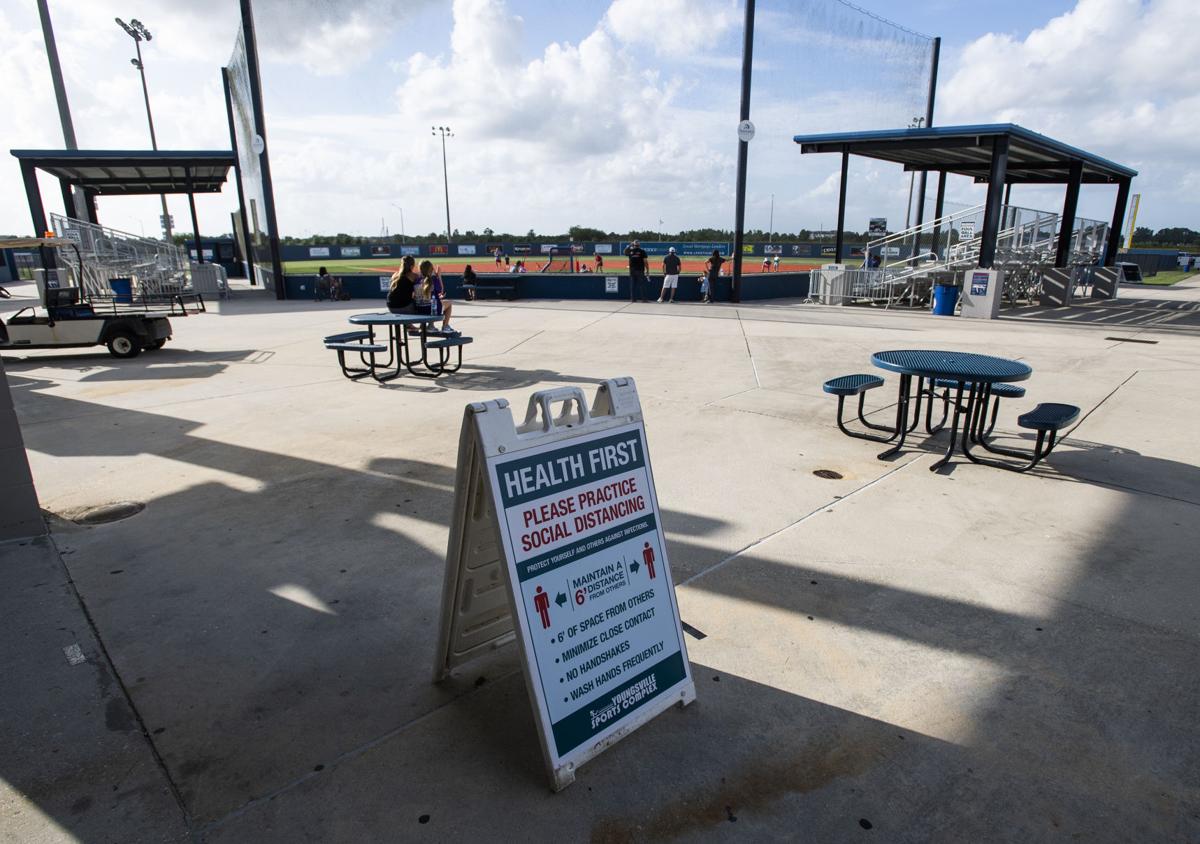 Travel ball teams from around the area returned to action this past weekend, but not without new guidelines at the parks.

The bleachers were closed at the Youngsville Sports Complex for last weekend's first travel ball tournament weekend. Erath, meanwhile, completely removed its bleacher from the complex.

On the first weekend of travel ball around the area over the Memorial Day holiday, dugouts were either closed - like here in Youngsville - or had a limit of people having access to it.

Travel ball teams from around the area returned to action this past weekend, but not without new guidelines at the parks.

Considering the uncertainty of the past 2½ months, several Acadiana-area sports complex officials were ecstatic with the first weekend of activity since the coronavirus shutdown.

“To be honest, it went better than we thought,” Tim Robichaux, director of the Youngsville Sports Complex, said of Memorial Day weekend. “We were a little fearful going into it.”

No, the scene at Robichaux's complex wasn’t 100% routine. It included unique guidelines like barricaded entrances to provide one way in and one way out; the bleachers were blocked off, forcing parents to sit in tents behind the outfield fences; and players didn’t even have access to the dugouts.

Robichaux said his facility had 47 girls teams and easily could have hosted a larger tournament, but “for now, we wanted to make sure we could handle and keep it safe for everybody.”

Robichaux said another factor contributing to the overall success of the first travel ball weekend was cooperation among parks around the state.

“We’re all in it together,” he said. “All the parks in the state. We’ve been talking to Alexandria and Ruston. We’re all leaning on each other. It’s been a collective effort. That helped a lot in decision-making.”

At Quality Sports Authority in Erath, there were no volunteers at the gate collecting admission. The upfront gate fee was paid online. Only 10 people were allowed in the dugout. So when a 10-player team with two coaches was at bat, two of the players had to stand outside the dugout until spots opened up.

Park director Jeremy Picard said his facility removed the bleachers from the park and added extra staff to regularly clean restrooms, and all concession workers had to use gloves and masks.

“Two weeks ago, USSSA called us and asked if we wanted to a host an event for them,” Picard said. “We were kind of skeptical, because at first we weren’t allowed to have concession stands or charge admission. But besides having to take out the stands and a few other things, it ran like a normal tournament would.

“It went very well. It was good to see the young kids playing baseball again.”

The other unique feature in Erath was that the plate umpire called balls and strikes behind the mound to maintain distance. While Picard said that was tougher on officials, and they will likely return to normal positions in Phase 2 of the state's reopening, the fans were kinder and gentler than usual.

“Everybody was a little more laid-back for the first weekend,” Picard said. “It seems like everybody was more excited just to be out and watch baseball. I’m sure next weekend they’ll be back to normal.”

Unlike most parks, Carencro took everyone’s temperature when entering the park, and “everybody was under 99 (degrees).”

Another unique aspect in Carencro is the fields are larger than in Broussard and Youngsville, and park officials painted "safe zones" in which spectators could put chairs to view the games.

“So with the temporary fencing, that gives us an extra 100 feet behind the outfield fence for the players and spectators to move around,” said Thibodeaux, who added the park provided a social distancing reminder every hour on the public address system.

The complex previously asked teams to limit spectators to two parents and limited siblings. In other places, the size of the crowd was controlled by keeping teams outside until 30 minutes before games and keeping parents until 15 minutes games. The complex asked everyone to leave as soon as the games ended.

Thibodeaux said Carencro will host an adult tournament this weekend, which “doesn’t bring as many spectators” as youth events.

As in other spots, Thibodeaux noticed a different attitude in the first weekend.

“The spectators and the players have all been very polite and cooperative,” he said. “In the past, there’s been a little more rudeness.”

At the Broussard Sports Complex, sports coordinator Gil Padgett said the first weekend went so well that “we didn’t even have any rain delays. Imagine that.”

Padgett said park officials disinfected after every game. The most difficult aspect of returning was the parents social distancing with the bleachers unavailable.

“Things went smoothly,” Padgett said. “There was a better vibe in the park than at times in the past. We had really good officials, and they didn’t tolerate any of it. The kids were just happy to be back and happy to be playing again.”

As for recreation ball, Broussard will extend spring registration June 1-July 5 and will now run its spring season from July 27 through Oct. 1.

Robichaux said his park in Youngsville only had trouble with numbers because of the shutdown on the recreation side, which has begun practicing but not playing games.

“The tournament side, it’s not as many fearful people,” Robichaux said. “There’s more caution on the rec side of things.”

“Some teams may have had two or three kids elect not to play and some had as many as nine, so we had to regroup (the rosters),” said Robichaux, who added his complex is now ready to host events with as many as 80 teams.

As for recreation ball, Walter Guillory of the Lafayette Recreation and Parks Department said neighborhood leagues are still registering. Scott is slated to begin play a five-week season beginning June 8, followed by the other associations June 15.

Foote: It's time to seriously consider moving prep football season to the spring

The first time I heard the concept was during a catch-up phone call with an area high school football coach about six weeks ago.