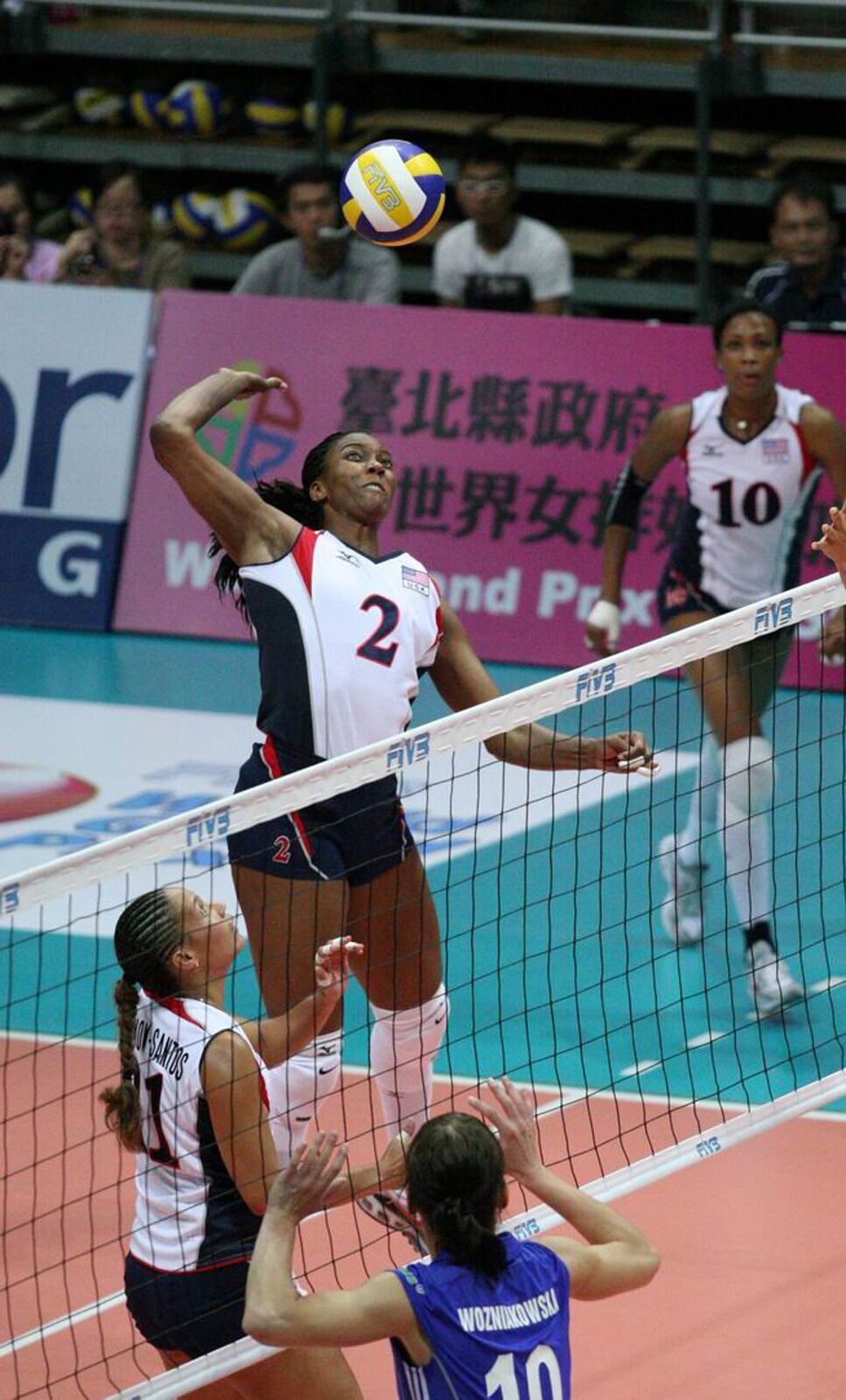 Five-time Olympic volleyball player Danielle Scott, a three-sport star at Woodlawn High School in the early 1990s, will be inducted into the Louisiana Sports Hall of Fame on Saturday night. 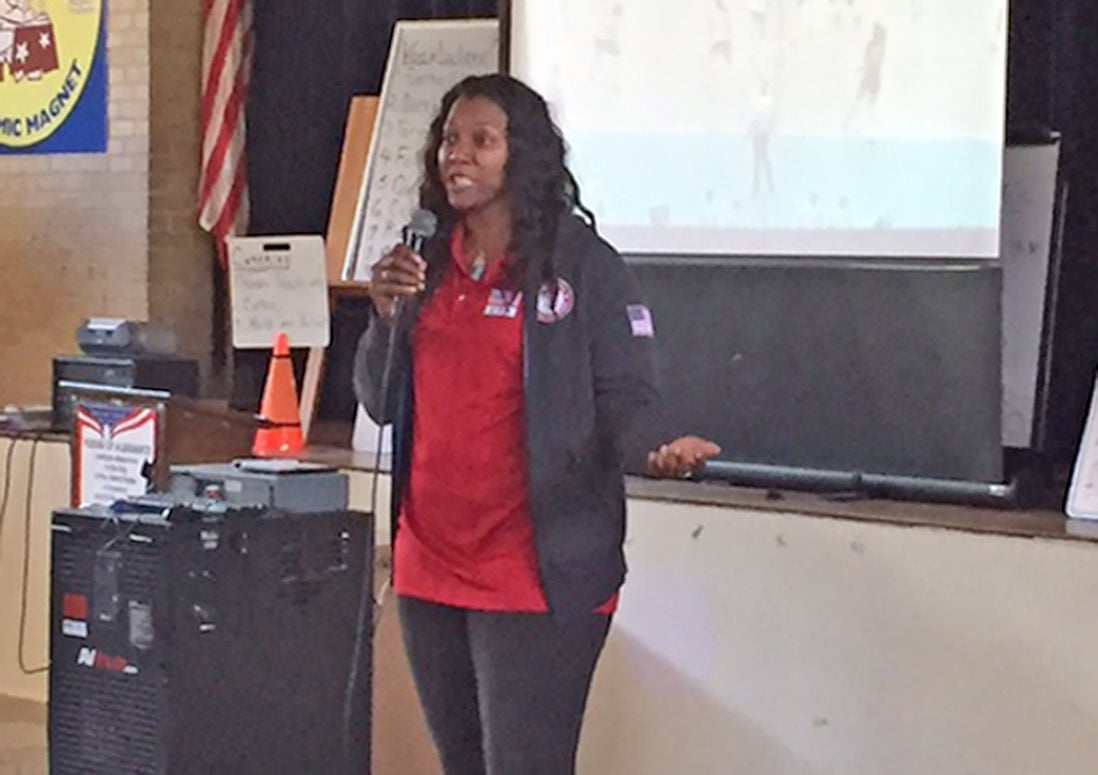 Five-time volleyball Olympian Danielle Scott, talking to students at Westdale Heights Academy in 2016, will be inducted into the Louisiana Sports Hall of Fame on Saturday night.

Five-time Olympic volleyball player Danielle Scott, a three-sport star at Woodlawn High School in the early 1990s, will be inducted into the Louisiana Sports Hall of Fame on Saturday night.

Five-time volleyball Olympian Danielle Scott, talking to students at Westdale Heights Academy in 2016, will be inducted into the Louisiana Sports Hall of Fame on Saturday night.

Editor's note: This is the sixth in a series of stories on the 2019 inductees to the Louisiana Sports Hall of Fame. Induction ceremonies are Saturday night in Natchitoches.

Young watched his daughter, Danielle Scott, grow up to become an indoor volleyball legend who played in an unprecedented five Olympic Games.

A story that explains the essence of the Baton Rouge native took place far from an Olympic arena. It happened at one of Scott’s high school track meets for Woodlawn High.

“Danielle was going to run the last leg of the relay; it was the 4x400. The team was way behind,” Young recalled. “I told her, ‘You know, there is a lot of ground to make up.’ And she told me, ‘We won’t finish last.’ Then she took off. I watched her start passing people. And you know what … she won that race.”

There are many ways to describe Scott.

She is a two-time Olympic silver medalist and an intense competitor. Scott also is a woman of strong faith, a survivor, proud daughter and a doting mother, all characteristics that define her today.

Those attributes and her accomplishments made her initial appearance on the ballot short-lived for the Louisiana Sports Hall of Fame selection committee that voted her in with the enshrinement class that will be inducted Saturday in Natchitoches.

“Anytime you are recognized, it is quite a feat. … There are so many deserving people out there and for me to be selected is humbling,” Scott said. “It is really cool to be back home again and then to be recognized.

“The class I am with is phenomenal. It’s nice to be recognized for the time I put in. It is even better for me to share this with my daughter, along with the entire family.”

There were early mornings when her mother, Vera Scott, would turn on the television in order to do a morning workout before heading off to work. Scott and her sister would join in.

Call it a humble beginning to an epic athletic career.

After one year at Baton Rouge High, Scott moved to Woodlawn and got involved in as many things as she could.

“Danielle has always had energy and always does a lot of things to this day,” Young said. “Even with all the sports she did and her high school classes, Danielle wanted to join the band.”

Her mother even insisted she enter a local Miss Louisiana teen pageant.

It did not take the 6-foot-2 Scott long to catch the eye of Bonnie Hunter, who coached volleyball, basketball, and softball at Woodlawn. Scott played all those sports and competed in track.

“I had three or four tall girls before Danielle,” said Hunter, who now coaches softball at Minden High. “You could see her athleticism right away. She was very quiet. But she was always like a sponge and wanted to learn anything you can teach her. Danielle also was so sweet and kind.”

Scott signed with volleyball power Long Beach State, where she played volleyball and basketball. She even competed in track one spring, scoring points in three events at the 49ers conference meet.

Though Scott garnered two tryouts with the Los Angeles Sparks in the early years of the WNBA, volleyball was undoubtedly her signature sport.

She earned All-America honors and was selected as the National Player of the Year in 1993 after leading Long Beach State to an NCAA title.

A year later, Scott joined the USA Volleyball national team and remained on the top U.S. team for 20 years.

As Les Miles takes spot in Louisiana Sports Hall of Fame, LSU still has 'a special place' in his heart

Editor's note: This is the fifth in a series of stories on the 2019 inductees to the Louisiana Sports Hall of Fame. Induction ceremonies are J…

She was the top middle blocker in the world for several years, played professionally in places like Italy, Japan, and Brazil and was the MVP of the World Grand Prix in 2001.

That total body of work led to Scott’s undeniable induction into the International Volleyball Hall of Fame in 2016.

“Five Olympics? Who does that other than Dani?” asked USA Volleyball/Olympic volleyball teammate Tayyiba Haneef-Park. “There are two things that set her apart — her strong faith and her ability to adapt throughout her elite volleyball career.

“Dani always says she puts things in God’s hands. But she never sat around waiting to see what was going to happen,” she added. “She worked to improve. She made herself a better player.

“Not all great players adjust to or are willing to take on a different role. Dani was a starter; she played as a back-up. She was a leader, a mentor to younger players, and a great teammate. Dani played whatever role she was asked to fill.”

Having the in-born tenacity to prove skeptics wrong never hurt, either. Hunter recalls a conversation with Scott during her early years at Long Beach. Some questioned whether she could play the back row in addition to the front row role of a middle blocker.

“Somebody told Danielle, ‘You just don’t have it,’ ” Hunter said with a laugh. “Danielle did what she does. She stayed after practice every day and worked on the skills she needed to play the back row. The next time I talked to her she said, ‘Oh, I got it.’ ”

Haneef-Park recalls the matches when Scott, quiet but ever so competitive, would respond to making a key play with a fist pump. Or she would offer an over-the-eyebrows glare at opponents.

A series of different challenges off the court began as Scott’s professional career wound down.

She returned to Louisiana and helped care for her mother, who died of cancer in 2014. Then, Scott’s home and car were damaged by Baton Rouge’s historic flooding in 2016.

Louisiana Sports Hall of Fame: Peyton Manning always wanted to be a QB, 'Like my daddy'

Editor's note: This is the fourth in a series of stories on the 2019 inductees to the Louisiana Sports Hall of Fame. Induction ceremonies are …

Last November, Scott’s sister Stefanie died as the result of a domestic attack by her estranged husband. Scott herself was hospitalized for stab wounds suffered while defending her sister.

USA Volleyball created a Courage Award and presented it to Scott at its Hall of Fame induction May 22 in Columbus, Ohio. After months of physical therapy, Scott returned to the court as a player-coach in the USA Volleyball Open Division championship.

“There are no words to describe how brave Danielle was on that fateful night last November,” USA Volleyball CEO Jamie Davis said in a news release. “She exemplifies everything good about humanity, and we couldn’t be prouder to have created a new USA Volleyball Courage Award to recognize her heroic actions. She should be a role model for us all.”

Scott insists age is just a number, and she still loves to compete in competitions like the USA Open. Or even on sand volleyball courts in and around Baton Rouge.

With Scott, there is always more going on. She works in the investment field, does speaking engagements, hosts volleyball camps and enjoys age-group coaching for USA Volleyball.

She also promotes the sport of volleyball wherever possible, including an April trip to Shreveport, where an Olympic Qualification volleyball is scheduled Aug. 2-4.

Actively helping to coach her 9-year-old daughter Julianne' in a variety of sports is something Scott also relishes.

“By nature, I am a positive person and I do rely on my faith,” Scott said. “For me, age is just a number. My time with daughter and my family is so precious to me. I am excited about whatever the future holds.”

Regardless of what the future holds, Scott’s volleyball legacy is set. Haneef-Park puts Scott among the top five USA Volleyball women’s players ever, ranking her among 1980s heroes like Debbie Green-Vargas and the late Flo Hyman.

“When I think about Danielle,” Hunter said, “you know what I’m proudest of? That she got her education and pursued her dreams.”