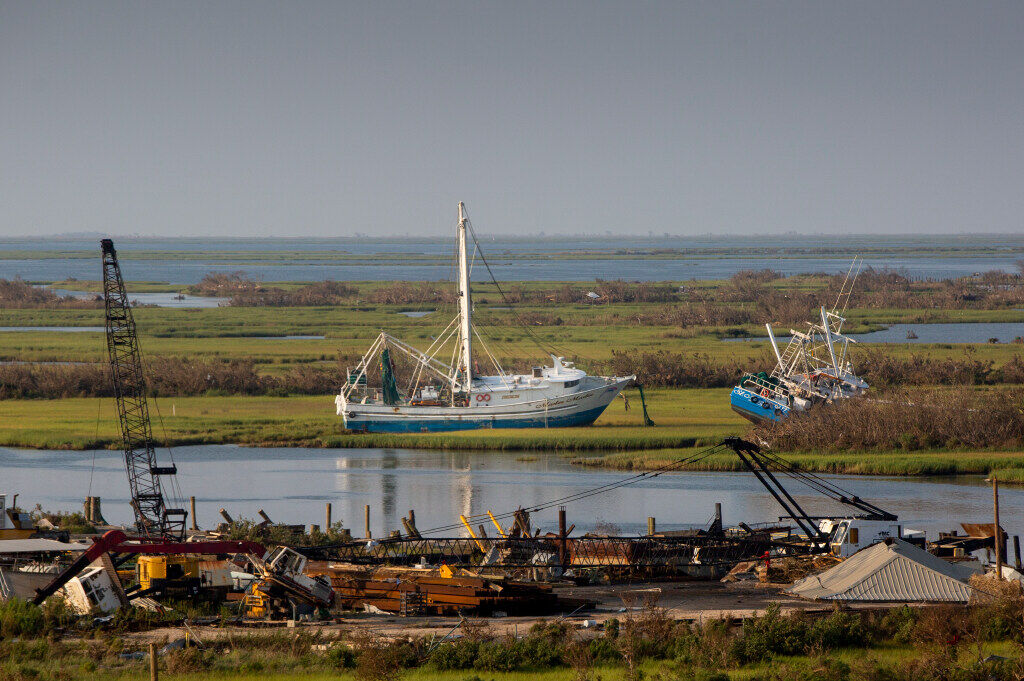 Commercial shrimp boats are grounded after Hurricane Ida in Leevile on Sept. 4. 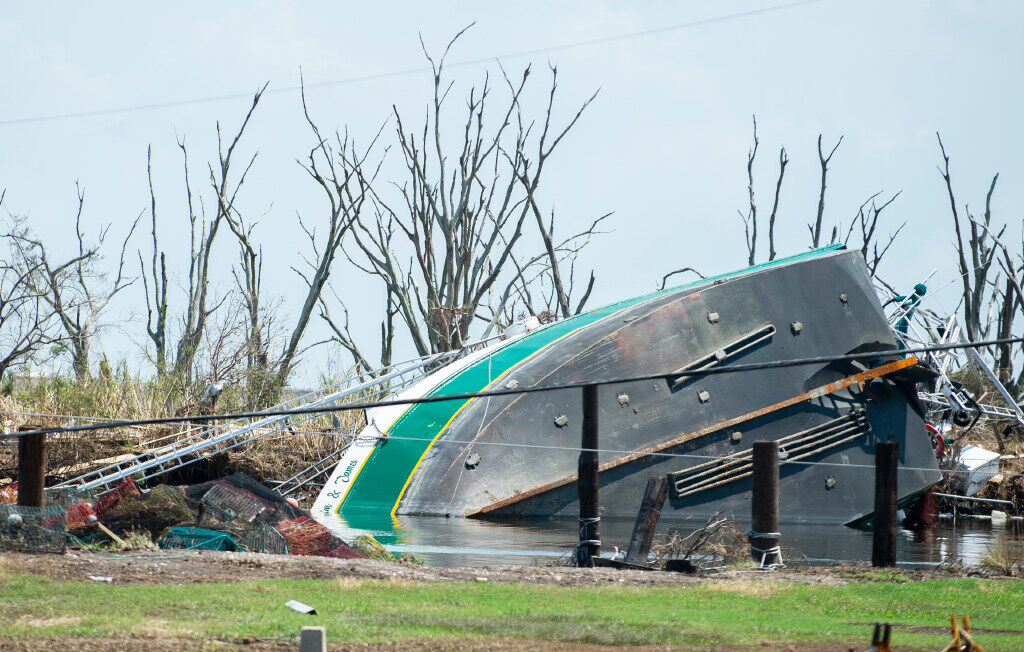 Kimothy Guy's boat, which flipped during Hurricane Ida while he was on board, is shown Tuesday.

Commercial shrimp boats are grounded after Hurricane Ida in Leevile on Sept. 4.

Kimothy Guy's boat, which flipped during Hurricane Ida while he was on board, is shown Tuesday.

Except for power and water restoration for some, recovery for thousands more across southeast Louisiana appears to be weeks, months, maybe a year after Hurricane Ida left a vast, destructive swath across as many as 18 parishes.

During the past 10 days, elected officials in Livingston and Tangipahoa parishes closed all waterways, to include the Tchefuncte and Tangipahoa rivers, Bayou Bonfuca and Bayou Liberty and Bedico Creek. Livingston Parish’s announcement will allow owners of water-access camps to get on the affected waterways, but must travel at idle speed.

While Blind River wasn’t included on that list, reports of an extensive fish kill and bank-to-bank debris in several locations will limit access.

The condition in Plaquemines Parish is such that Sheriff Gerald Turlich Jr., in a statement released Thursday, announced a continued dusk-to-dawn curfew, a move that will impede hunters moving into that parish for the teal season, which opened Saturday.

“During this time, hunters will not be allowed into Plaquemines Parish until the mandatory evacuations (on the east side of the Mississippi River) and the curfews are lifted,” Turlich said. “We truly want our hunters to come down to Plaquemines Parish for the start of the teal duck hunting season, but it’s not safe at the moment.”

While others parishes have not posted such notices, destruction is so widespread across Terrebonne, lower Lafourche and lower Jefferson parishes, that recovery will mimic the months it took Plaquemines, St. Bernard, St. Tammany and Orleans parishes to recover from Hurricane Katrina 16 years ago.

“This storm looks much worse for a lot of others than Katrina was for us,” Ryan Lambert said.

After a week or surveying the extent of the damage, it’s clear miles upon miles of the coastal Louisiana will be out of commission for a long time.

Start by drawing a line south from the intersection of La. 20 and U.S. 90 near Gibson, then draw a line east to the La. 20-La. 24 intersection south of Thibodaux, then east along to U.S. 90 to La. 23, then south along La. 23 to Pilot Town on the Mississippi River and access is limited to property and business owners.

There are no serviceable landings, although there was no word about the landing at Fort Jackson south of Buras.

“You can’t access the waterways, because there are houses and camps in the water,” Baton Rougean Camp Matens said after a trip down La. 315. “There’s no service in Houma or anywhere south, no lights, no water and power lines down for miles.”

Lafourche and lower Jefferson are in the same shape, including Leeville, areas of west of Golden Meadow, The Fourchon and Grand Isle.

The fishing community of Pointe Fourchon was especially hard hit. Roofs ripped off. Water damage everywhere, and the worst was one structure ripped from its pilings and dumped on the grounds.

“Pointe Fourchon is destroyed,” the community’s unofficial “mayor” Mary Olive Pierson said. “Our recovery will be a marathon, not a sprint.”

Pierson’s place was a total loss.

The Atchafalaya and Verret basins were spared, and all landings in both basins are open.

Todd Masson and Chas Champagne have been on the waters in the Pontchartrain Basin during the past week.

Some landings in that area and in St. Bernard Parish are open, to include Rigolets Marina, The Point (the old Dockside), Campo’s, the old Gulf Outlet Marina, the Bayou Bienvenu Marina and launch ramps in Jefferson Parish into Lake Pontchartrain. The Lake St. Catherine launch was out of commission after the storm blew a shrimp boat on the backdown ramp, and the Chef landing “took a beating,” Masson said.

Both said Rigolets and Campo’s had live bait.

Delacroix landings took a beating from storm surge, but didn’t appear to have much wind damage.

Any fishing or boating trip comes with the warning of waters with storm debris, and Champagne’s report, “the water in the lake (Pontchartain) looks bad. It’s muddy just like it was in the spring and early summer when the bayous and rivers were dumping all that rain runoff into the lake.

“It was just starting to clear up and get real fishable when the storm muddied it again,” he said. “I think it will take three weeks to clear. It looks like when the (Bonnet Carre) spillway was open.

For Masson, the damage went deeper: “I fished the area between the MRGO (Mississippi River Gulf Outlet) and the ICWW (Intracoastal Waterway) for six hours with an exposed hook on a jighead before I found one piece of coontail grass,” Masson said. “The storm wiped out the grassbeds, the places the fish found to be good habitat.”

Masson said his catch was light, no more than a handful of speckled trout and a redfish.

Champagne, the owner of Matrix Shad, had eight trout Friday, “enough for a meal. There’s no grass in the lake, and that might make it tough on catching fish this fall.”

The Southeast Louisiana National Wildlife Refuges office said crews worked most of last week clearing and cleaning refuges from “damage and access challenges in the aftermath of Hurricane Ida. Efforts are underway to open access to all public use locations across the nine refuges in the complex.”

“You can follow the path of the storm to track the fish kills,” Maxwell said. “The area takes in 2 million acres, and the main concern is low dissolved oxygen levels in the waters.”

Maxwell said a crew was surveying the Florida Parishes rivers and batous to further determine the extent of fish kills and identifying how widespread low dissolved oxygen levels are in those waterways.

He said the continued efforts are because fish-kill reports came from populated areas, and further study was needed in the uninhabited areas.

He noted Blind River and areas off Ida’s track to the southwest in the Gibson area and southeast to Belle Chasse for other fish kills. He said a more extensive report will document the kills.

Using the week following Ida, state waterfowl biologists assessed teal numbers in the coastal marshes and found 209,000 bluewing teal in the southwest marshes, and 66,000 bluewings in the southeastern marshes.

Mississippi will allow Louisiana charter fishing operations to launch from Mississippi ports through the end of this year.