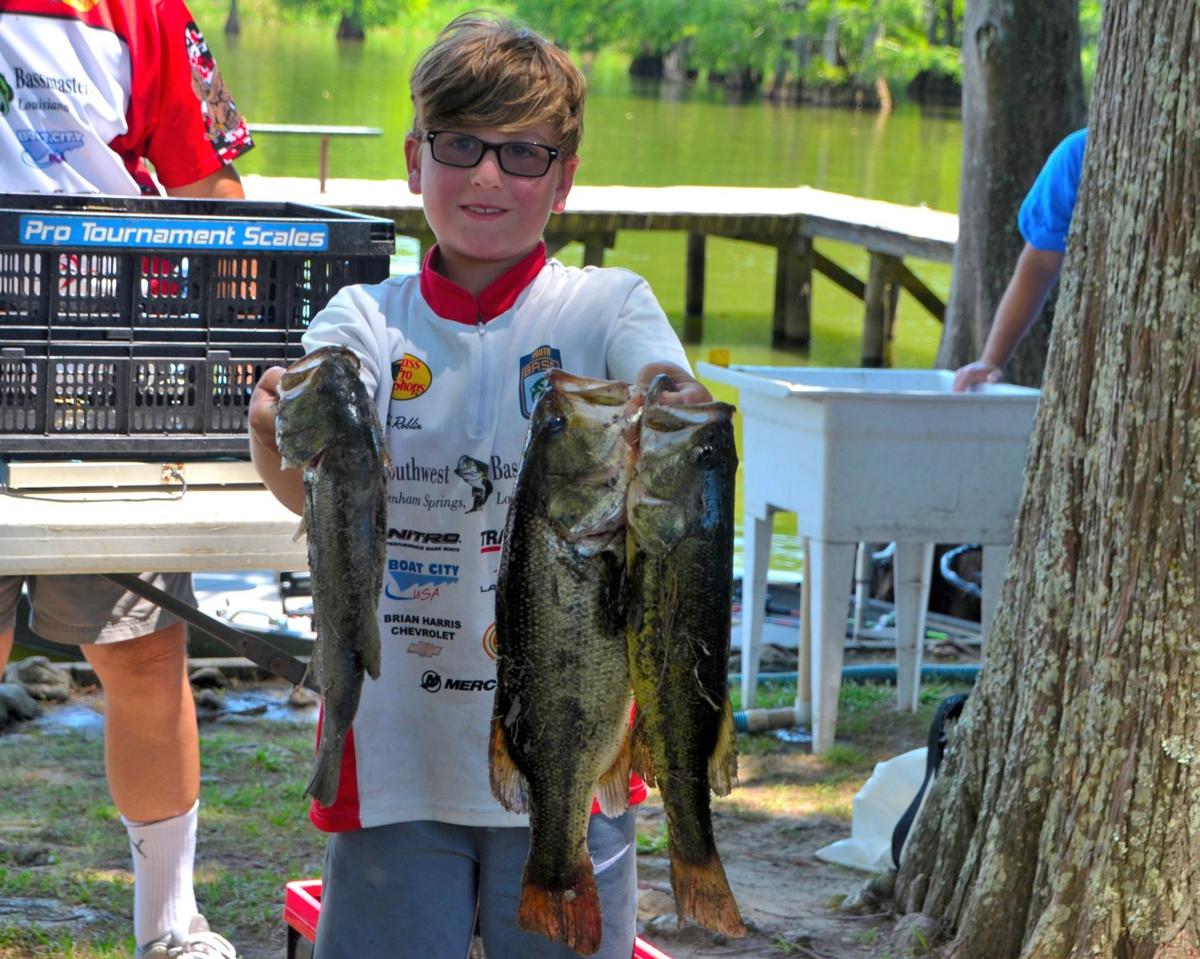 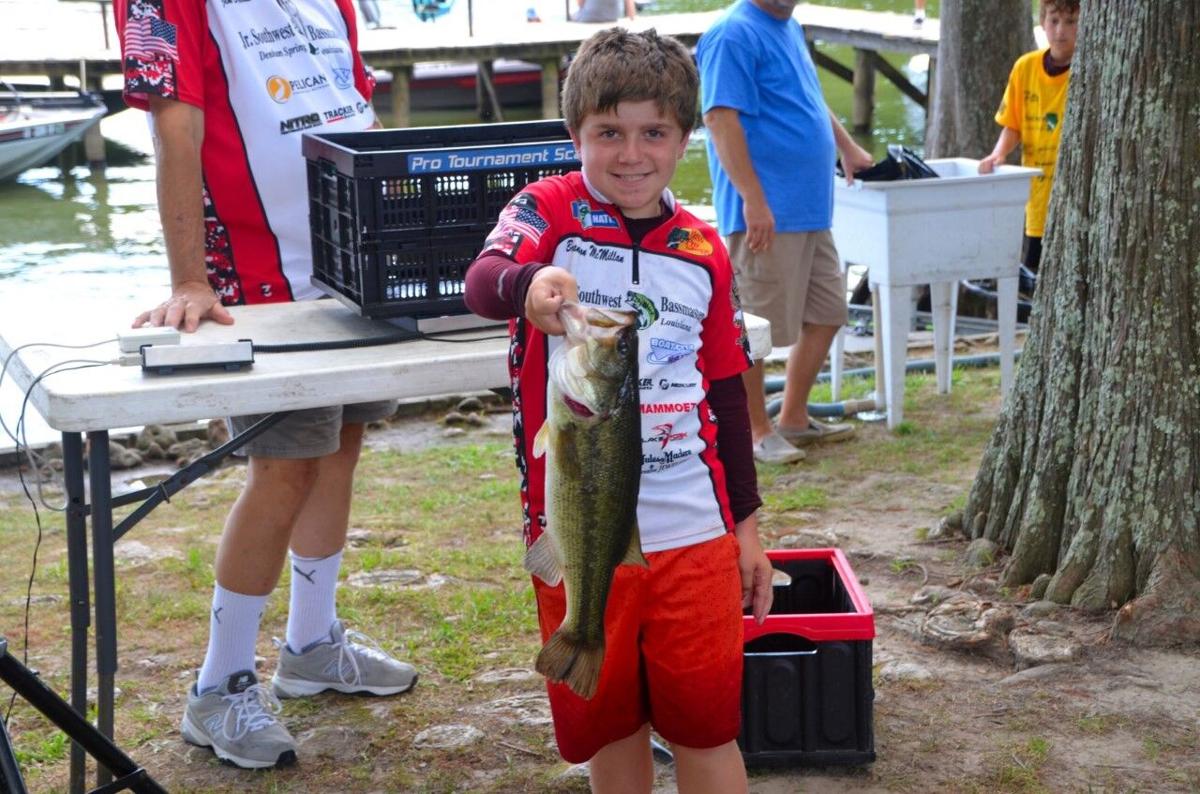 Knowing most of the adults are leading the way, it’s always a welcomed time when Junior Southwest Bassmasters sends in the report from its latest on-the-water get-together.

And, these 44 young anglers caught fish to rival their adult “coaches.”

The report showed much more. The pattern in oxbow lakes like Concordia is the same from the big freshwater basins and marshes — rise before sunup, get to the lake and cast spinnerbaits and swimbaits before the sun gets too high in the sky.

That’s because the patterns from all these places show shad moving to the shallows from first light until the sun gets up over the trees and “brightens” the water. In some locations, the shad remain around off-the-bank cypress trees and will continue to take the two aforementioned lures, but, in most cases, the shad head out to deeper water.

That’s why Breaux reported, “early morning bite, followed by culling up to bigger fish bites at noon through early afternoon time Saturday. They were fishing on a rising full moon. Sunday was definitely an early bite with five-fish limits being caught within the first hour of the morning.”

His mention of the lures used during the weekend — frogs, swimbaits, spinnerbaits, crankbaits, jigs and wacky-rigged plastics — and it always leaves one to wonder just how big a tackle box these youngsters tote, because that’s an extraordinarily wide variety of presentations.

When Act 356 was signed by Gov. John Bel Edwards, the structure of recreational hunting and fishing, along with commercial fishing license fees increased.

The move was pushed by the Department of Wildlife and Fisheries to increase revenues — this state agency receives no general fund dollars. Also, the LDWF said it had “a large volume of calls regarding the future of their lifetime licenses.”

OK, the new law doesn’t eliminate lifetime licenses, but restructures this option into three types — a $500 resident youth 17 and under; a $100 resident 65-and-older senior; and, a $4,000 nonresident.

These new licenses will go on sale June 1, 2022, so you have until May 31, 2022, to purchase lifetime licenses under the old fee structure.

And, the LDWF release stated, “current lifetime license holders will keep their existing privileges and they will not be converted into one of the new licenses.”

The new license structures for hunters, anglers and commercial fishermen can be found on the agency’s website: wlf.louisiana.gov/page/understanding-our-license-fee-changes.

The LDWF has moved to a mini presentation of Becoming an Outdoor Woman Workshop set Aug. 14 at its Education Center in Woodworth south of Alexandria.

The one-day event will focus on the introduction to archery and bow hunting.

While the release indicated the first part of the day will involve a lecture with printed handouts, it continued, “The majority of time will involve hands-on experience with archery gear. As an added bonus, introduction to bow fishing will be included.”

The reason for announcing this so early is the courses have limited enrollment and fill fast.

To register, go to this LDWF website: lawff.org/bow, or you can email Dana Norsworthy: dnorsworthy@wlf.la.gov.

Waterfowl breeding grounds funding and the final report on wildlife and fisheries matters from this year's Legislative session tops the agenda for Thursday’s 9:30 a.m. Wildlife and Fisheries Commission meeting at state LDWF headquarters on Quail Drive in Baton Rouge.

Note there’s a 75% restriction in the first-floor meeting room, and the meeting will be available via Zoom.

Unable to attend? There’s a 2 p.m. deadline for submitting public comment to: comments@wlf.la.gov.

Tripp Bowman and Blakely Young brought in 28 pounds, 8 ounces to get their LSU-Shreveport team to a fifth-place finish in the two-day Carhartt Bassmaster College Series Wild Card tournament that ended Thursday on Lay Lake in Alabama. They were less that 2 pounds off the winners.

The Southeastern Louisiana team of Grant Lesage and Zach Davis finished 12th with a 25-6 total.

That brings the estimated total of U.S. anglers to nearly 55 million.

The report on fishing noted several interesting facts, to include, female participation increased 10% to 19.7 million; 13.5 million youth ages 6 to 17 were counted; 4.8 million Hispanic Americans went fishing in 2020, an all-time high; African American participation increased by 14.6% from 2019, bringing that ethnic group to represent 7.7% of all anglers in 2020.

“Over the last five years, our targeted outreach efforts and long-term planning positioned fishing well to handle the unique challenges and opportunities faced during 2020,” sRBFF exec Stephanie Vatalaro said in the report. “As Americans looked for safe ways to get out of their homes during the pandemic, fishing offered a socially distant outlet for families and individuals to get outdoors and experience the wellness benefits of nature.”