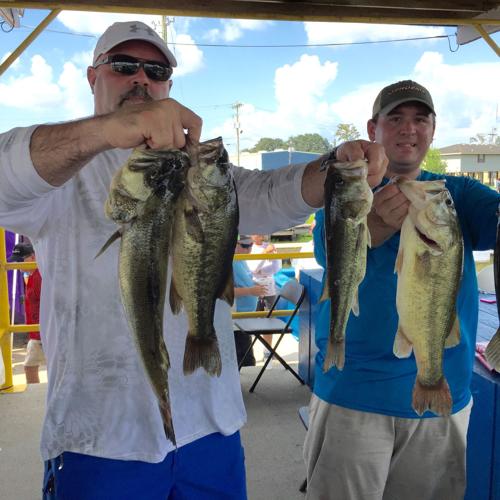 Chad Wild, left, and Doug McClung show off four of the five bass they weighed Saturday to win the Ascension Area Anglers bass tournament from Doiron's Landing. Their five bass weighing 15.57 pounds, edged the team of David Cavell and Chuck Halbert by one ounce. 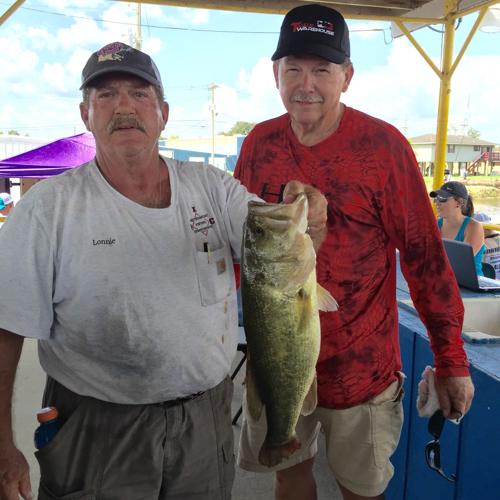 Lonnie Boudreaux, left, holds the 5.67-pound largemouth bass he and Gary Haney caught in waters off the Atchafalaya River to take the big-bass pot in Saturday's Ascension Area Anglers tournament held from Doiron's Landing in Stephensville. The team said they caught most of their fish on soft-plastic 'creature' lures to finish fourth in the 85-boat event.

Chad Wild, left, and Doug McClung show off four of the five bass they weighed Saturday to win the Ascension Area Anglers bass tournament from Doiron's Landing. Their five bass weighing 15.57 pounds, edged the team of David Cavell and Chuck Halbert by one ounce.

Lonnie Boudreaux, left, holds the 5.67-pound largemouth bass he and Gary Haney caught in waters off the Atchafalaya River to take the big-bass pot in Saturday's Ascension Area Anglers tournament held from Doiron's Landing in Stephensville. The team said they caught most of their fish on soft-plastic 'creature' lures to finish fourth in the 85-boat event.

It’s a best-of-times and a worst-of-times story that plays out every August on two of Louisiana’s most famed freshwater spots, and, indeed, it’s a tale of fishing holes only die-hard bass fishermen can tell.

It’s about the two sides of the East Atchafalaya Guide Levee constructed long enough ago to be known as “the levee” be it always a dividing line between two large basins, the Atchafalaya on the western side and Verret to the east.

It’s about spring’s floodwaters and summer’s intense heat. When you add prolonged periods of heavy afternoon rains, thunderstorms and an almost constant change in wind direction, you have an fishing equation even the best anglers can’t solve.

That’s what the 170 fishermen in a record 85-boat field faced Saturday for the third Ascension Area Anglers bass tournament.

Doug McClung and Chad Wild arrived at a solution, but only by making a hard decision. McClung, the former and successful LSU Bass Team member, paired with Wild to take AAA’s top money with a five-bass limit weighing 15.57 pounds, a well-above-average, late-summer catch. They were on the Verret side.

Dave Cavell and Chuck Halbert spent the day in the Atchafalaya, and came up about an ounce short of first place with their five bass going 15.5 pounds. After that there was only one more team, Ray Loupe and Chad Cahoon, with a 3-pound average (15.38 total) with their five bass.

OK, so it wasn’t so difficult to find fish that day. Some 51 of the 56 teams weighing their catch had five-bass limits. Finding big fish was the problem.

McClung said he scouted, Atchafalaya but didn’t like what he found.

“It just was not right,” he said. “Normally I’d fish the (Atchafalaya) Basin, but I talked to Logan Latuso (who finished sixth) and he told me about the Lake Palourde area, and with the (Atchafalaya) on the rise, we decided to go on the Verret side.”

Lake Palourde is the southernmost of the Verret Basin’s three main lakes with Verret on the north end and Grassy Lake between Verret and Palourde.

“We started in the run-outs in Belle River with not much luck and went to the trees on the north side of Palourde. It was dirty, but we fished a little longer in there and picked up a good 4-pounder,” McClung said. “But that was it.”

That triggered a move to Palourde’s south side. McClung said he was thinking that areaa “was more stable, that nothing drains through it to make it muddy.”

The move paid off.

“There was better water there. We were seeing more baitfish and fished the mouths of the canals,” he said. “There was one canal, and usually I don’t like to fish canals when it’s this hot, but Chad is from Hammond and a Pearl River guy, and so he said we should move into the canal, and we did.”

Their first fish there was a 14-inch bass, then another what McClung said was a “good” fish as they worked their way to the back of the canal.

“We caught another 4-pounder back there and picked up another 2½-pound fish and had a limit, and thought that was about all we could do there,” he said. “But we decided to give it another try.”

That’s when a winning pattern emerged. “I picked up a frog and started hitting the shady areas, and that’s when we picked up with 4½-pounder,” he said.

Then they hit the wall. Despite a plan to catch another bass that could cull a 2-pound bass from their limit, that was it save catching a couple of smaller bass.

“Luckily we had enough by that time to give us the weight,” McClung said before further dissecting the day.

“A white CJ Bass swim jig worked well early in any kind of shade in any kind of cover, but later in the morning it was setting up that the bass were feeding on bream, and, for me, that sets up for fishing a frog,” McClung said.

“We caught three quality fish on the Spro Frog, a white popper, and it really works when the water is getting close to 90 degrees and the fish are moving into the shallow water where there’s a little more (dissolved) oxygen,” he said. “It’s a big bait and the bigger fish will eat something bigger because they’re not eating a lot these days.”

There was more: McClung said he worked the frog slowly around cypress trees and duck seed.

“Basically I use three colors — white, black and Killer Gill — and it was a matter of just putting it in front of the fish, and walk it really, really slow.”

It was a more simple decision for Jaime Laiche and his partner that day, his wife Angie. When he got to the landing, the power trim on his outboard didn’t work. That meant putting in at the “car wash” landing near the tournament’s HQ at Doiron’s Landing, not his intended Atchafalaya Basin trip, and using his trolling motor to fish that canal.

“It’s the first time in 15 years we’ve fished a tournament together. And the last time was at False River, and we won that one,” Angie Laiche said dropping a hint no one could ignore.

“And I lost one around 3 pounds that could have given us 16 pounds,” Jamie Laiche said.

Cavell and Halbert made no bones about where they caught fish — the Atchafalaya.

“We started in Duck Lake, and there were a few fish there, then we started looking for structure in a little deeper water around deep cypress (trees) or around wellheads, places where there was current or shade, or both,” Cavell said. “We figured we’d flip a D-Bomb (a soft-plastic “creature” bait), but that wasn’t the case.

“We’d flip an area, then turn around and throw a Black Label square-bill (a hard-plastic crankbait), and bounce if off some sort of cover and the fish would eat it,” he said. “Our biggest fish came on the D-bomb, but our stringer came from the Black Label on a reaction bite.”

He said the fish “were not in a biting mood,” which meant putting something in the water that would trigger the bass into a strike.

“It’s so hot and that makes it a different deal fishing the Spillway,” Cavell said. “I know there were some guys who caught 40, maybe 50 bass (Saturday) but that’s not what we needed to do.

“Deeper structure holds bigger fish, and the key to finding bigger fish right now is that find areas where the water is fairly stable,” he said. “I don’t want to find water that transitions from dirty to green, or stained water that’s clearing. Fish are in the places where the water conditions are stable, and that’s why we went to Duck Lake, because it doesn’t go from muddy to black to clear, then back to something else.

“It’s the same with Flat Lake. It stays with good color and good (water) quality for most of the year. It’s not a place where fishing can be good one day, then you get a rise, or get a fall and the water drops six inches and pulls black water into the canal and the next day all you find are dead bream because there’s no (dissolved) oxygen in the water.

“Fishermen need to find stable water to have the best catch,” he said.

The tournament’s lunker came from the Gary Haney-Lonnie Boudreaux team.

“I guess the best guess about where the fish came from is the south end toward the Atchafalaya River,” Haney said. “It was muddy, but the water was moving. We caught one on a spinnerbait and all the rest on soft-plastic creature baits, but nothing on a jig and that was a surprise.”

Their bass weighed 5.67 pounds, a giant summertime largemouth for these waters.

The AAA tournament raises money for the state’s BASS Nation National tournament qualifiers. Five in-state anglers made the cut for the nationals this year, the most ever from Louisiana.

Sumrall lives on the west side of the Atchafalaya Basin, and this will be his first nationals.

“This is awesome, an awesome tournament, and I can’t tell you what it means to me that so many others would come out to support us like this,” Sumrall told the crowd at the weigh-in.

Hanson Chaney of Walker weighed in five bass totaling 10.43 pounds to stand as the top young angler — he won the 15-18 age group — in Saturday’s Junior Southwest Bassmasters-Denham Springs tournament held from the Bayou Sorrel public landing in the Atchafalaya Basin.

The club set a record that day with 52 junior anglers in three age groups competing with adult co-anglers. Club organizer Jim Breaux reported there were 25 five-bass limits and 45 of the 52 youngsters weighed in at least one bass. He said bass took a variety of lures, including spinnerbaits, Speed Craws, worms, creature baits. Some used the punching technique into heavy vegetation.

In a head-to-head duel between two Lafayette area schools on Henderson Lake, Teurlings Catholic’s team of Konner Smith and Dylan Guidry won a bass fishing battle with a 7.1-pound stringer ahead of the St. Thomas More’s team of Braxton Voisin and Cameron Cannon, who came in with 5.93 pounds.

Paul Mouisset’s report on this event bears our reports from Henderson in the north end of the Atchafalaya, that there are lots of small bass and they’re laying the heavy grass.

It’s about this time, too, that much warmer water temperatures limits coastal action in shallow waters along the beaches and in the bays.

Grand Isle area reports from the last week are that speckled trout continue to work the beaches from Grand Terre west into The Fourchon and points west, but the fish are active only in the day’s first hours. Live shrimp continue to provide action on trout up to 18 inches long and redfish cruising the surf.

Don’t expect to catch the 25-per-person limits. Most trips are getting 10-15 fish per angler.

If you’re heading to Grand Isle for a Saturday morning trip, know that Ride the Bull, the largest kayak-paddlecraft fishing tournament in the world will be held in Caminada Pass out of Bridge Side Marina. Last year’s RTB had more than 700 entries.

If you’re fishing, then the word is crabs are moving through the pass and bull redfish are stacking up to make the most of this crab-feast time.

Winners are determined by the heaviest redfish. RTB’s extraordinary part is that every effort is made to keep the redfish alive in a holding tank for transport to the weigh station, then the fish is tagged and released into Grand Isle waters.