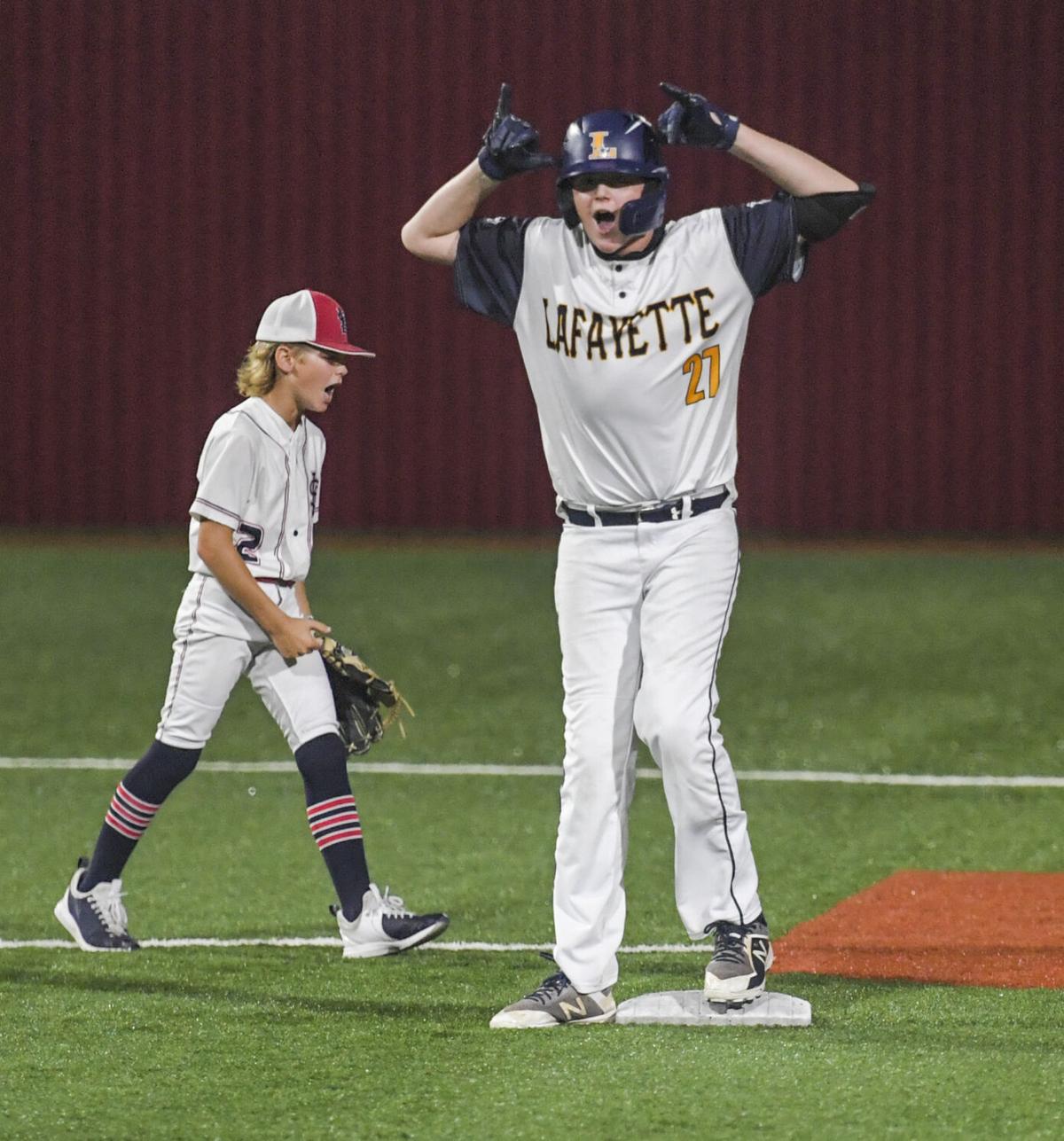 Lafayette first baseman Isaac Boudreaux (27) flexes after hitting a double in the bottom of the seventh inning during Lafayette's 6-5 win over South Lake Charles on Monday at St. Julien Park. 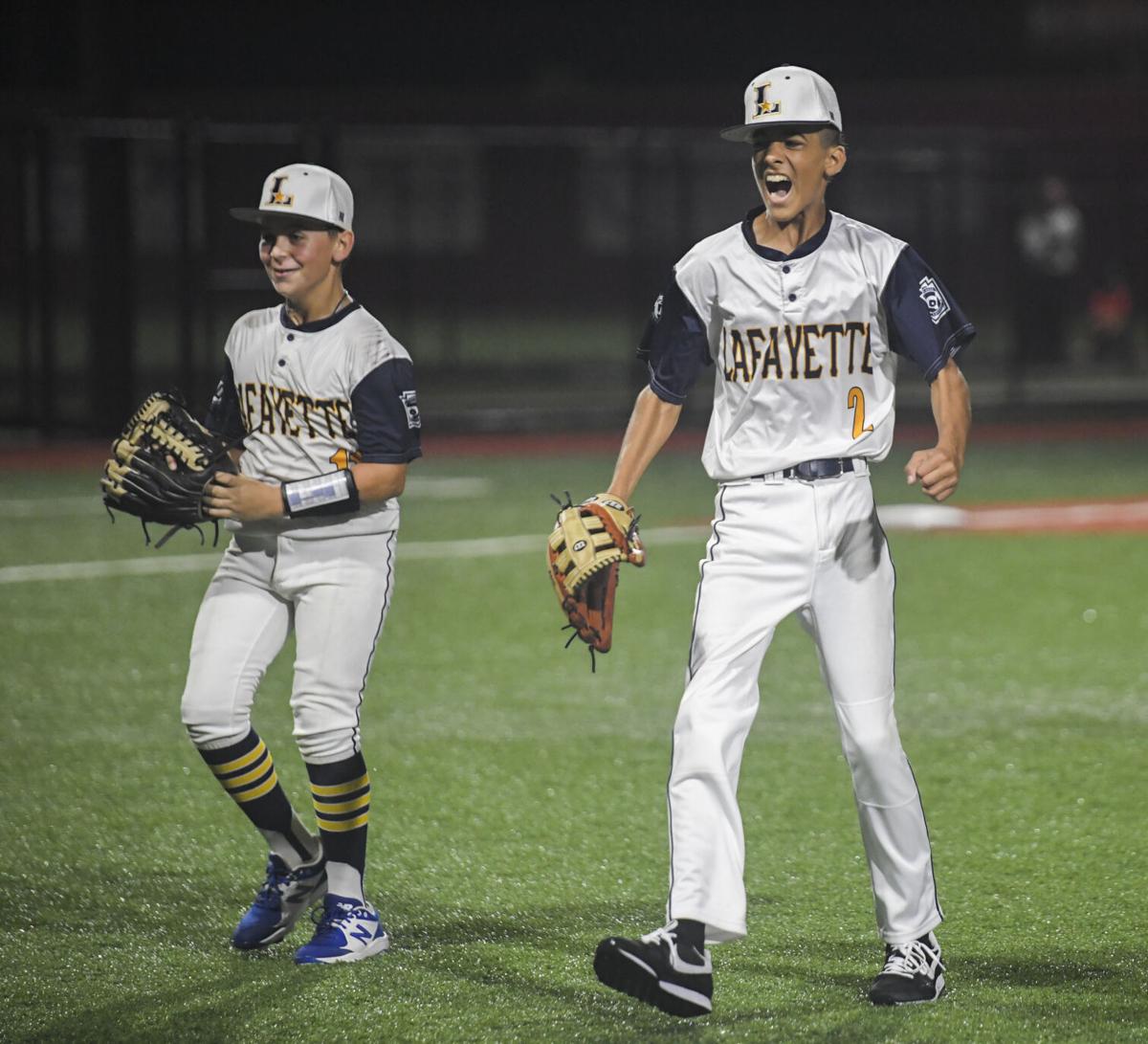 Lafayette pitcher Nick Brown (2) and teammate Eli Clark ,left, celebrate getting out of a inning during Lafayette's 6-5 win over South Lake Charles on Monday in the state semifinal game at St. Julien Park.

Lafayette first baseman Isaac Boudreaux (27) flexes after hitting a double in the bottom of the seventh inning during Lafayette's 6-5 win over South Lake Charles on Monday at St. Julien Park.

Lafayette pitcher Nick Brown (2) and teammate Eli Clark ,left, celebrate getting out of a inning during Lafayette's 6-5 win over South Lake Charles on Monday in the state semifinal game at St. Julien Park.

A Lafayette Little League team is one win away from reaching the Southwest Region tournament in Waco, Texas, for the first time since 2011.

After South Lake Charles scored three runs in the top of the seventh inning Monday at St. Julien Park in Broussard, Lafayette Little League responded with four runs to claim a 6-5 win in extra innings.

Aiden LeBouef stroked a single up the middle that brought home Issac Boudreaux with the game-winning run.

"He's done that a couple of times already for us," Lafayette coach Steven Menard said of LeBouef. "Every time he's at the plate, he gives us a chance."

Sawyer Watkins led off the seventh with an inside-the-park home run to get the rally started for Lafayette, which will face the East Bank/South Lake Charles winner on Wednesday.

"That was huge," Menard said. "Watkins had struggled a little earlier tonight, but he is so quick. When he barrels out the ball, he can get around the bases quickly. He can flat out play."

Cooper Hawkins followed with a triple before Landyn Craft reached on a walk to put runners on third and first. Boudreaux, the clean-up hitter, then doubled to tie the game at 5-5.

Craft reached base in all four at-bats with a single, a double and two walks.

"He can swing it," Menard said. "Craft is hitting in the three hole for a reason. He's a big leader on this team at shortstop. He's a great kid and a great athlete."

In the bottom of the third, Lafayette tied the game at 1-1 when Craft's double brought home Watkins, who reached on a walk.

Craft reached on a walk in the fifth and stole second and third before crossing the plate on a wild pitch to put Lafayette ahead 2-1.

"Nick Brown is our guy," Menard said. "We had him pinned for this game. We knew that if he was on, we had a shot to stay in this game. He is one of the best pitchers we have out here.

"What's so great about Nick is he has great velocity and control over three pitches. I'm so proud of him. It's fun to watch him get those innings in."

Brown reached the maximum pitch count with South Lake Charles down to its last out in the sixth. The visitors then sent the game into extra innings with a walk and an RBI double off Craft.

"That was a good one," Menard said. "We knew that was going to be a tough one. That's a great team out of South Lake Charles. We had to fight to get every run. We went back and forth with a great team."

Tournament official Katie Schexnaider said the Lafayette team is made up of a group of all-star players from a six-team local league. The group is undefeated through six games and has outscored its opponents 79-8.

"Our whole team is unselfish," Menard said. "These guys, whether they're playing every inning or substituting in once or twice a game, nobody in that dugout is selfish. I think that is our strongest point."

The winner of Tuesday's East Bank/South Lake Charles contest will have to beat Lafayette twice.

"Our ace, Boudreaux, pitched against East Bank on Friday night," Menard said. "He reached the maximum pitch count. He has four days rest and will come back Wednesday night. We have a couple of other guys coming back, so we'll have everybody but Nick Brown.

"We're set up good. In addition to Boudreaux, we'll have Craft. We'll have (Cole) Schexnaider, who pitched against Sulphur. Hopefully, we don't have to go to an 'if-necessary' game. Hopefully, Boudreaux can take us to Waco."

The winner of the Southwest Region will advance to the Little League World Series in Williamsport, Pennsylvania.

"It's been a bunch of years since we've been in the championship game at the state tournament," Menard said. "We're fired up. We have a special group of kids."

Lafayette Little League all-stars win state, head to region tournament; here's how they did it

For the second straight game, Aiden LeBouef came through in the clutch for the Lafayette Little League all-stars.