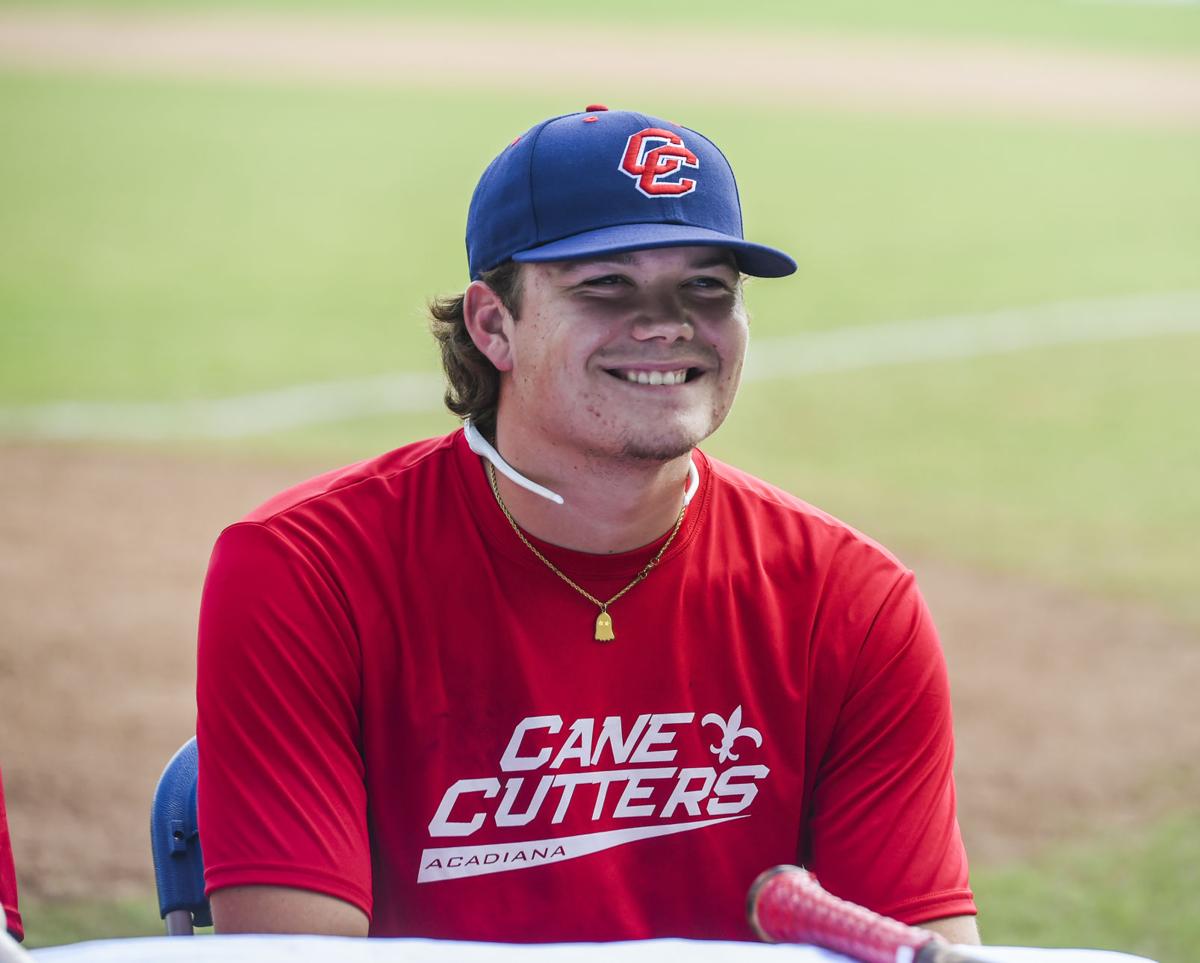 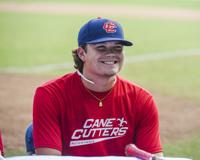 Acadiana Cane Cutters pitcher Blake Marshall, who will be joining the UL Ragin' Cajuns baseball program in the fall, smiles as he addressed the media Monday at Fabacher Field. The Cane Cutters will open the 2020 Texas Collegiate League at 7 p.m. Tuesday against Victoria. 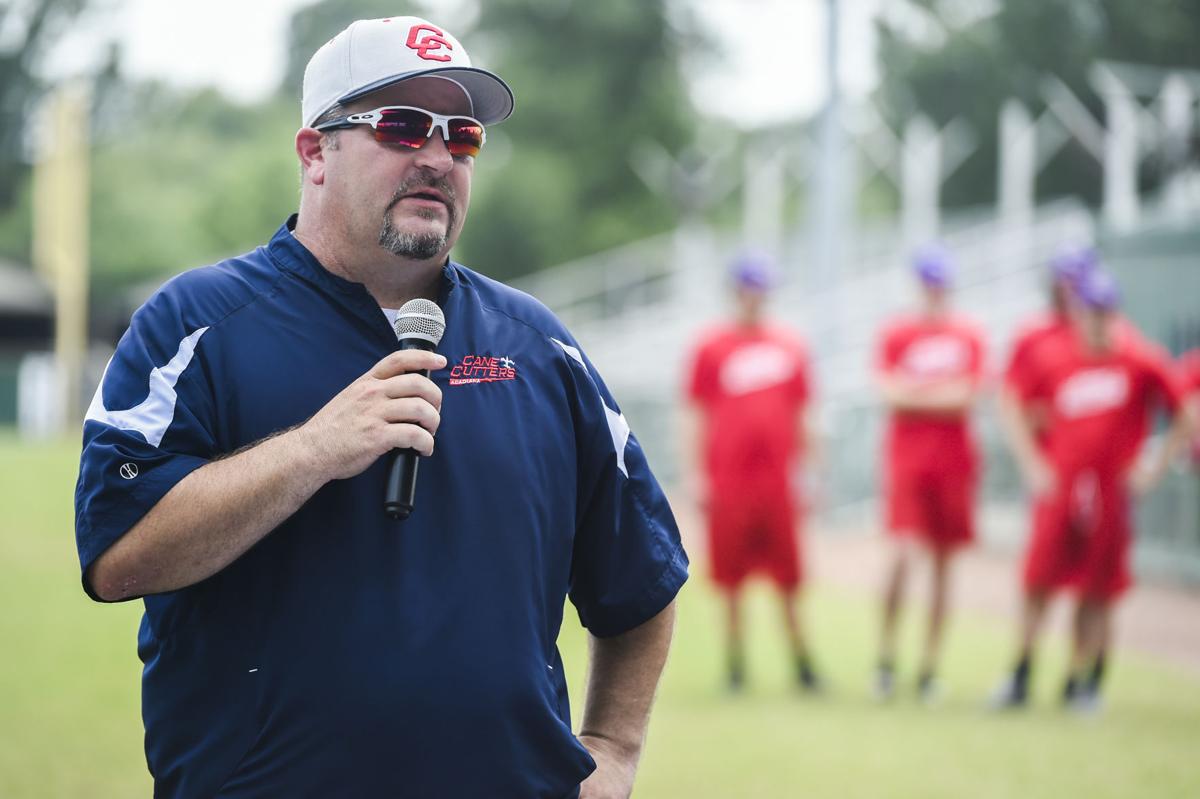 Acadiana Cane Cutters pitcher Blake Marshall, who will be joining the UL Ragin' Cajuns baseball program in the fall, smiles as he addressed the media Monday at Fabacher Field. The Cane Cutters will open the 2020 Texas Collegiate League at 7 p.m. Tuesday against Victoria.

YOUNGSVILLE — For the collegiate ball players coming to Cajun Country from all over the country to the Acadiana Cane Cutters ball club, it’s finally time for baseball to be played on the field at Fabacher Field.

The unconventional start of the 2020 Texas Collegiate League season will begin at 7 p.m. Tuesday against the Victoria Generals in Youngsville shortly after Wayne Toups sings the national anthem.

After missing the end of the spring college season and the TCL’s season pushed back a month all because of the coronavirus shutdown across the country, perhaps even more questions enter the picture when the season begins Tuesday.

Social-distancing guidelines will be followed in seating fans at Fabacher Field. Masks will be available for all fans who need.

Just weeks before the delayed start to the 2020 Texas Collegiate League season June 30, the league announced an expansion to 10 teams Thursday.

“In the past couple of days watching these guys, a lot of these guys have a lot of pop and a lot of speed,” VanAsselberg said. "The pitchers look way better than I thought they were going to look. A lot of guys are throwing pretty hard for being off for a couple of months, so we’re looking for a lot of great things out of these guys this summer.”

Making the transition even tougher is the rain over the weekend. The team arrived Thursday, but most of the first three days in town was reduced to hitting in the cages.

“But yesterday we did a little walk-through and some guys got to see some live pitching,” VanAsselberg said. “Guys got on the mound and looked really good.

“The hitters are always behind early and I think they’re going to be really behind now because they hadn’t seen a fastball in three or four months.”

VanAsselberg said the biggest chore for him these days is calming his overzealous squad down before the pace of the season sinks in.

“My main thing right now, I told them last night, ‘Don’t be sprinting,’” VanAsselberg said. “They’re all excited right now. They’re going around and doing everything wide open. I think the hardest part is to kind of tame them down a little bit, because I know they hadn’t been running or working out. I don’t want anybody pulling a hamstring or blow their arm out, or nothing like that.

“The hardest thing for me is to just keep them calm and let’s ease into it.”

One of the primary ways the Cutters’ staff will achieve that for the pitchers is limiting their pitch counts throughout the summer. No pitchers will be overworked. Cane Cutters owner Richard Chalmers made that goal easier to achieve by bringing in three extra pitchers.

“These guys are probably going to be anywhere between a 30- and 45-pitch count,” VanAsselberg said. “Some of them haven’t throwing bullpens. They’re up to about 60 pitches. We’re going to try to roll them in their for two or three innings and get them out.

“I was telling them yesterday that nobody is really a starter. Everybody’s a reliever. It doesn’t matter who starts the game, because they’re going to be going five and six innings anyway.”

While Major League Baseball fans await word on when and if the coronavirus pandemic will allow the 2020 regular season to begin, the Acadiana …

“We’re all just ready to play some ball,” Marshall said. “It’s a good community. It’s definitely exciting getting to come here and play in Lafayette. It’s going to be a good time. I’m just hoping to definitely pound the strike zone, get after it.”

Former Breaux Bridge High standout Tyler Thibodeaux of Northwestern State, like all the hitters, expects the early going to be a challenge.

“I think the main thing is going to be our timing and just getting in the rhythm with the pitcher, but I think after a couple of games, we’ll figure it out,” he said.

At the same time, the long time away from the game makes him even more anxious.

“Having this little break kind of makes you appreciate how much it really means to us and how much we really love the game,” Thibodeaux said.

Chalmers said his front office fielded more calls than ever from across the country because of the shutdown of so many summer leagues. For the most part, though, the Cutters leaned on the usual schools, including state schools, Southern Mississippi and also into Texas.

“We’ve kind of stuck with the areas that we’re used to getting kids from,” Chalmers explained. “We have some California kids and kids from different areas, but you kind of stick with the people that kind of brought you to the dance.

The sports world has been turned upside down since the middle of March, so it only makes sense the Acadiana Cane Cutters’ 10th season as part …