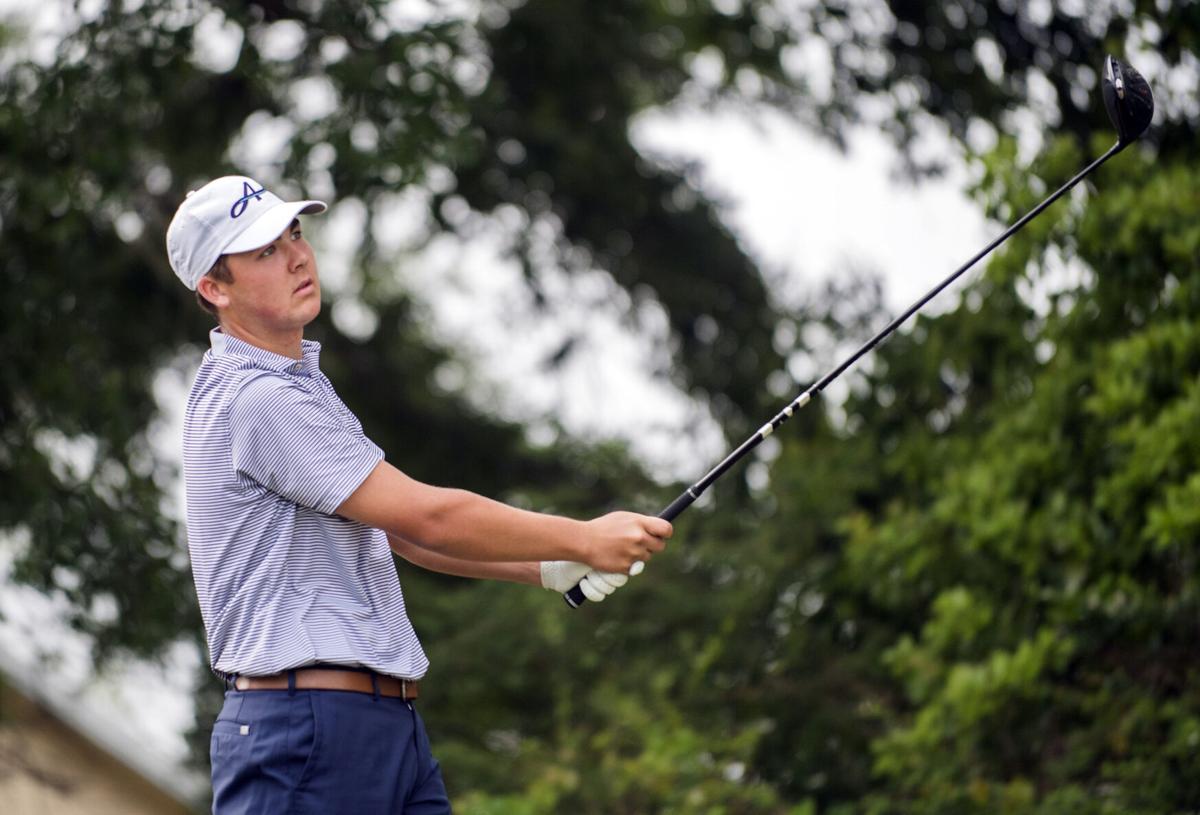 Ascension Episcopal's Eli Ortego tees off on the 10th hole Tuesday during his round of 67 to help the Blue Gators claim a third straight state title. 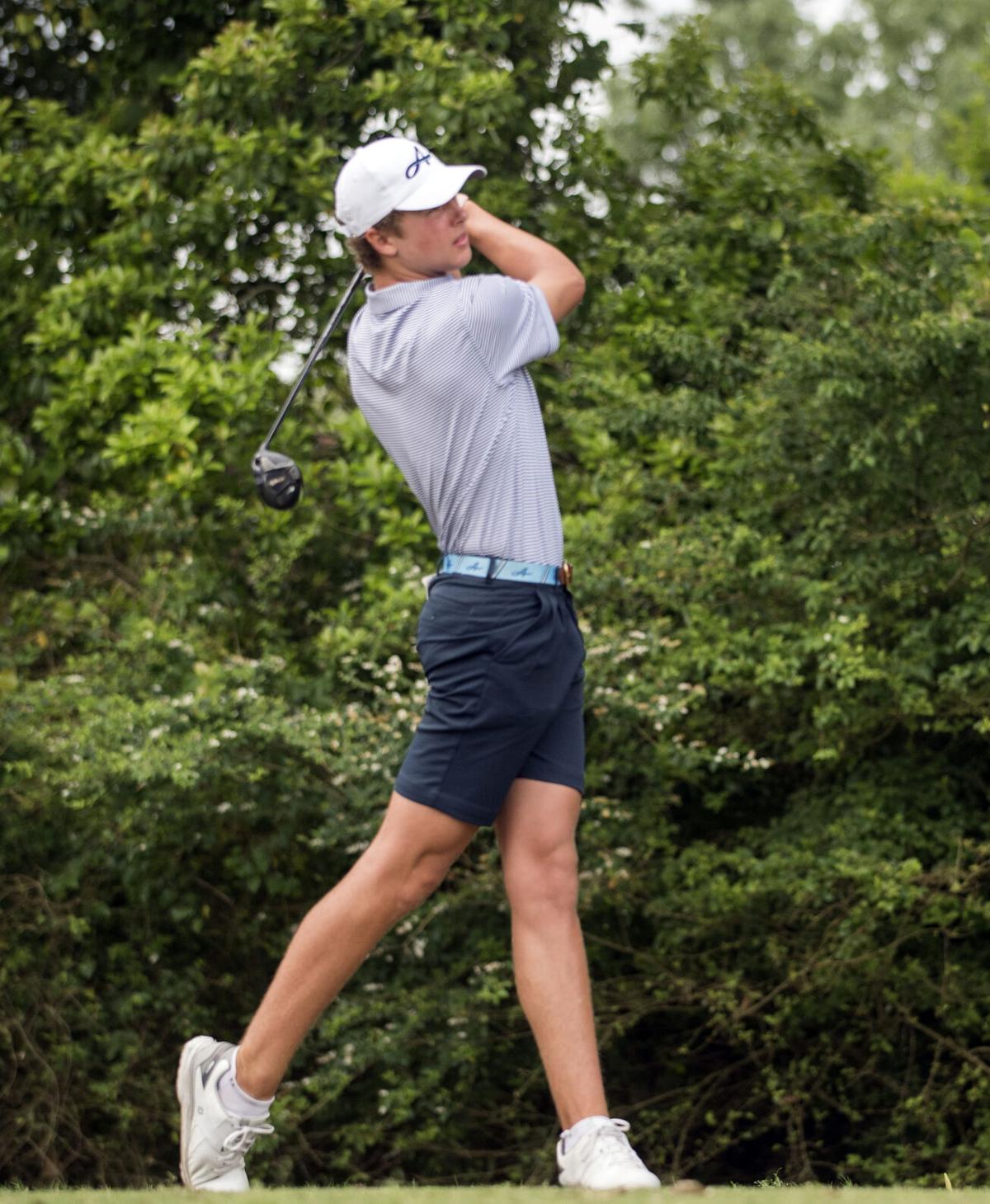 Ascension Episcopal's Kale Fontenot tees off on the 10th hole Tuesday at Farm D'Allie in Carencro during his round of 66 that helped the Blue Gators claim the Division III state championship.

Ascension Episcopal's Eli Ortego tees off on the 10th hole Tuesday during his round of 67 to help the Blue Gators claim a third straight state title.

Ascension Episcopal's Kale Fontenot tees off on the 10th hole Tuesday at Farm D'Allie in Carencro during his round of 66 that helped the Blue Gators claim the Division III state championship.

With the threat of rain in the Acadiana area, Tuesday’s second round at the Farm D’Allie and Wetlands golf courses forced LHSAA state golf tournament organizers to double up on morning tee times.

That made for packed courses and slower play than normal.

That didn’t make any difference to the Ascension Episcopal Blue Gators, who claimed a third consecutive Division III state championship.

For the Teurlings Catholic Rebels, only a slow start kept them from equaling that feat, finishing as the Division II state runner-up two strokes behind St. Louis.

“The conditions were tough, really tough,” Ascension Episcopal senior Eli Ortego said of his team’s round in Carencro. “But we hung through it. I’m glad we got all 18 in, because nine would have been not fun.”

Ortego said he woke up Tuesday morning fearful the golfers would only get nine holes in with the rainy weather forecast.

Instead, the Blue Gators just dominated, posting a winning score of 561 with a 281 after posting a team score of 280 in the opening round.

Ortego followed his 66 with a 67 to finish just one stroke behind Division III medalist Ryan Dupuy, who fired a 64 on Tuesday.

“I think we played as expected,” said Blue Gators sophomore Kale Fontenot, who shot 66 on Tuesday to finish third individually with a 136. “We have a bunch of guys who can play really well, and we did that.

“Our record was 4-under. We always try to shoot below that. We did that the first day. After that, we kind of felt like we had it in the bag.”

For Fontenot, this title was his first because of the pandemic erasing last year’s high school golf season.

“My first one; it’s awesome,” he said. “It’s great to be a part of it. This team is awesome. These are all good players and I love being around them. It’s amazing.”

Ortego was there for all three and he doesn’t see Ascension’s dominance ceasing any time soon.

At the Wetlands, Teurlings coach Robert Boudreaux's Rebels had high hopes after firing a team score of 304 in Monday’s first round.

Two things, however, left the Rebels two frustrating shots off the winning score.

One was a slow start.

“What we tried to do the last couple of weeks is come to some morning rounds on the weekend to actually get to play in the morning; different conditions.”

That strategy seemed to work on Day 1, but a rough start Tuesday left Teurlings with too tall a hill to climb.

“We fell short, but I’m still proud of my kids,” Boudreaux said. “They put in the work and we leave with a little hardware.”

The Rebels settled for a 314 team total in Day 2, eclipsed by two strokes overall with a 306 total by St. Louis of Lake Charles for a two-day winning total of 616.

The second reason for the visiting Saints catching Teurlings was the play of Jonathan Perry, who followed Monday’s 83 with a sparkling 72 in the second round to ignite the Saints win.