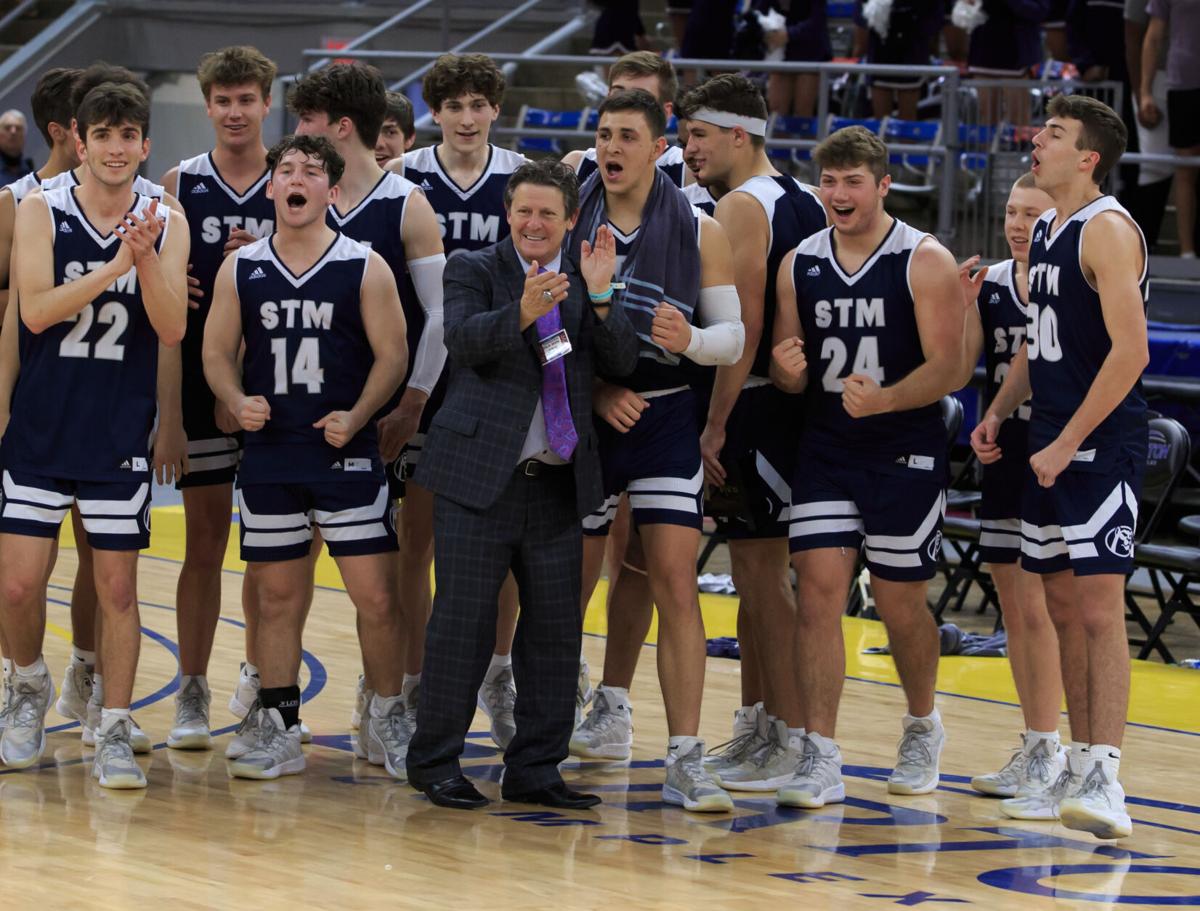 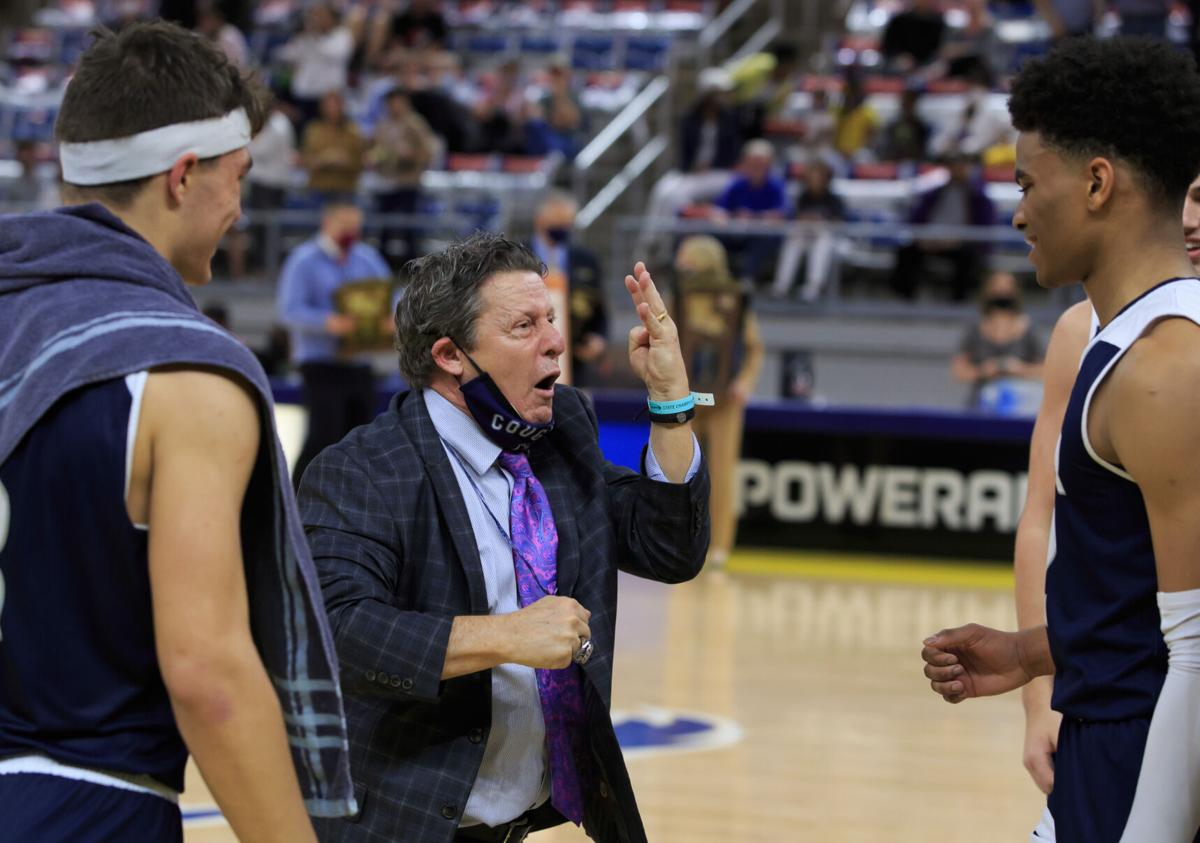 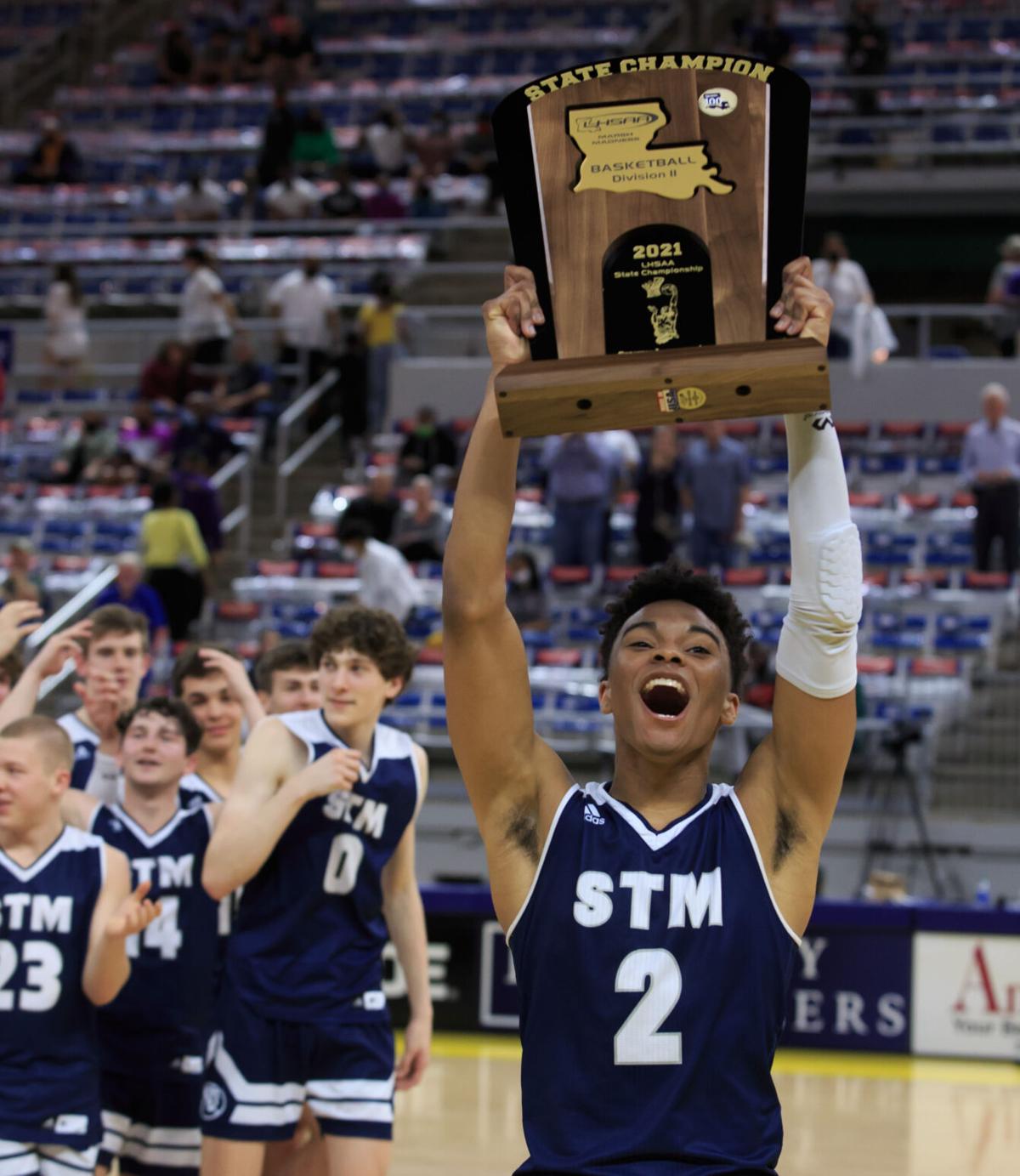 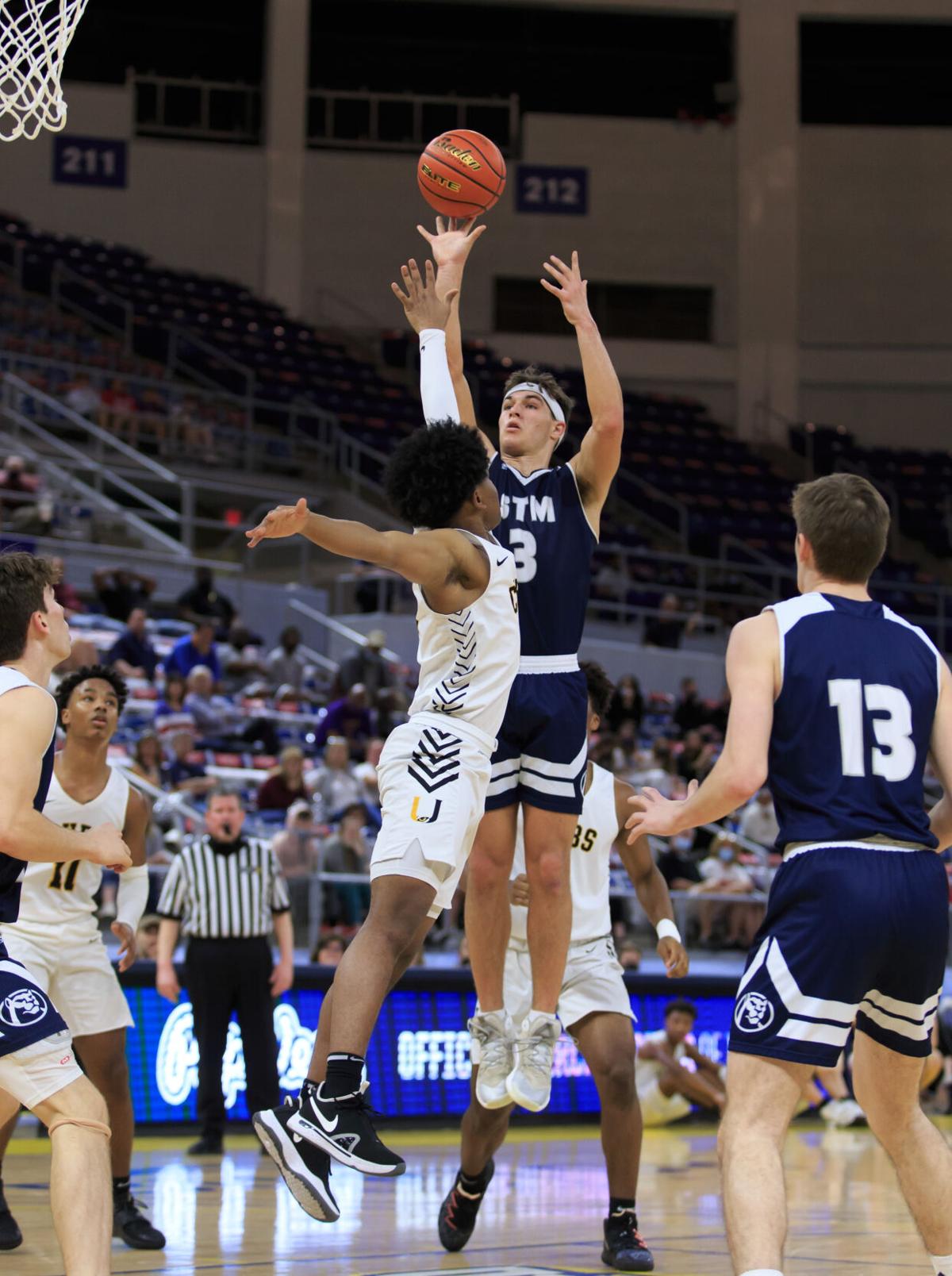 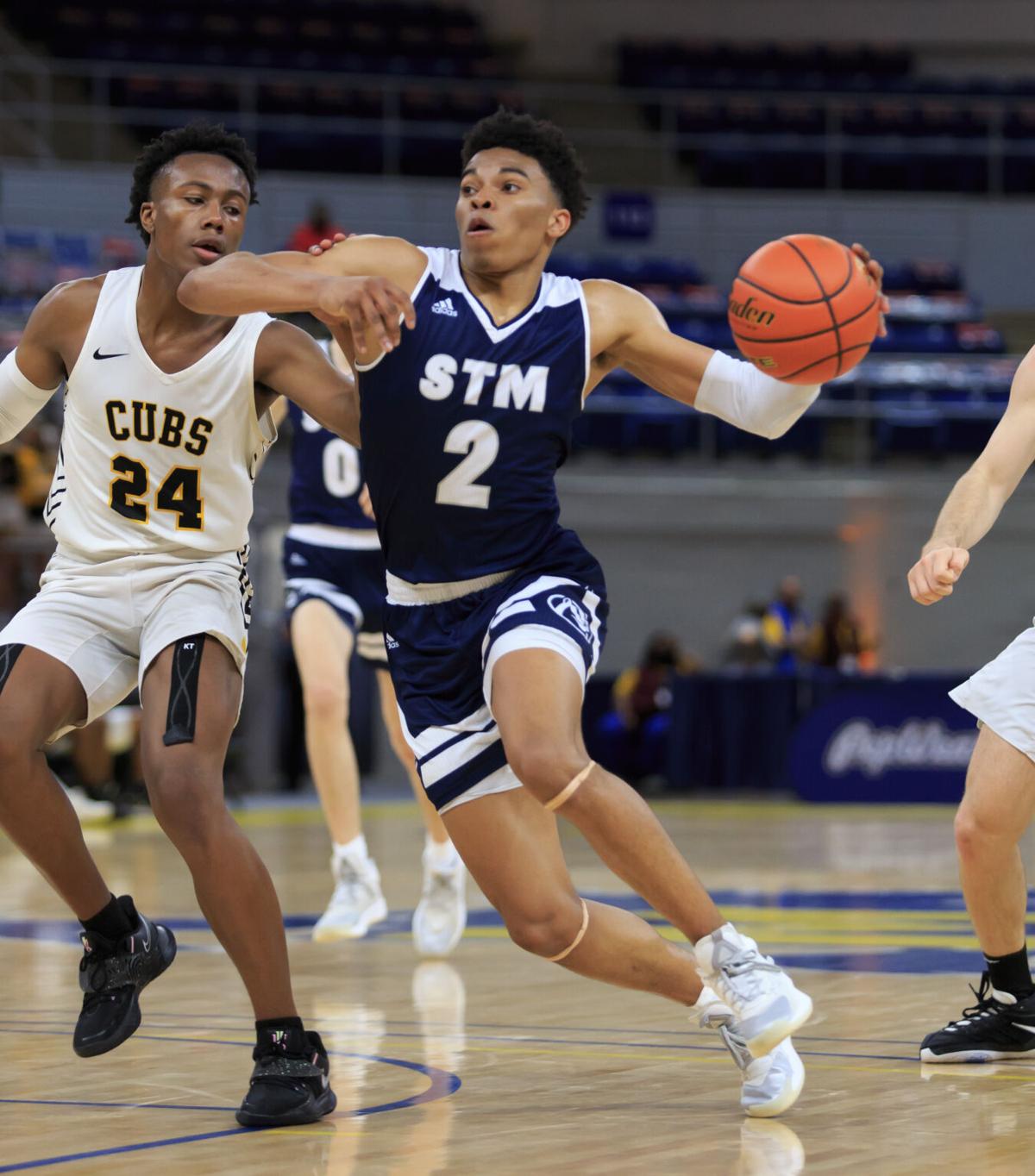 LAKE CHARLES — St. Thomas More boys basketball coach Danny Broussard was hesitant to call his recent run of state championships a dynasty, but he wasn’t shy in calling this year’s team one of the best in state history.

The No. 2-seeded Cougars were looking to join an exclusive club as only the fifth team in LHSAA history to win four boys basketball state championships in a row, and they did so in dominant fashion over No. 1-seeded University High Saturday afternoon at Burton Coliseum.

The Cougars took a commanding 60-39 victory over U-High to secure four straight Division II state titles and win their 26th game in a row to cap the season.

“I’ve been around this game a long time,” Broussard said. “I’ve been going to the Top 28 since I was six and seen tons and tons of games, and I’m going to say that this might be one of the best teams to ever play in Louisiana high school basketball history. What an unbelievable performance. This is an unbelievable team.

"I’m serious when I say this will go down as one of the best teams to ever play. You don’t win four straight if you’re not good, and after the fourth year of experience these guys had seen it all. (U-High) didn’t put anything on us that we hadn’t seen, and we executed. Everything we planned for this game worked out perfectly.”

The Cougars got off to a red-hot start and didn’t look back, going into halftime with a 39-15 lead after a barrage of 3-pointers and kept their foot on the gas.

“We were on fire in the first half,” Broussard said. “We weren’t missing threes. Obviously you can’t count on that, but we were in position to make those. It’s a coach's dream at a state championship game when 3-point shots are going in left and right, and when Jack (Bech) makes one, you know you’re in good shape.”

The Cougars senior class came out strong once again led by Carter Domingue, who was named Most Outstanding Player.

“I think we just did what we’ve done the past four years, and that’s get after guys,” Domingue said. “We’re some dogs, we get after each, and it starts early in the season. We’re getting after each other in practice, pushing each other, being the best we can, and that translates in the game because we just get after guys and off each other's energy. I’ve been saying all year, (Jack) Bech is just an energy freak, Jaden (Shelvin) is always ready to go, and we just play defense and get easy buckets in transition.”

Domingue led the Cougars with 17 points followed by Bech with 16 points, who’s committed to LSU for football next season.

“We emphasize a lot of practice to defense leading to the offense,” Bech said. “Our coaches talk about that a lot, so all five of us are capable of guarding anybody on the court, big or small. You have Bryce (Boullion) guarding 6-foot-6 people or you have him guarding somebody that’s 5-10. Same with Carter and Jaden, so I think our defense is really a key part to why we win games. Defense wins championships, and that’s just what we did out there.”

The Cougars stifled the U-High’s scoring attack led by Bryce Brown with a dominant defense that complimented their hot start on offense.

“I thought that we made (U-High) change a lot of their shots,” Broussard said. “Our physicality, we thought that’d be the difference in the game, so we knew that going in and tried to trap every opportunity we could early on to just get us jump started because sometimes our offense is a little stagnant.

"Our defense, our physicality gives people trouble. We just wouldn’t let him (Brown) get to the rim, and I think that was the difference in the game because he makes a lot of things happen, and we kind of took that away. No doubt our defense has been our catalyst all year long.”

It was a storybook ending for the Cougars (32-4) and this senior class, who won state championships in all four years of their high school career and were 50-1 the past two seasons with their lineup intact.

“It’s surreal,” Shelvin said. “People can only dream of just winning one state championship, and we went ahead and won four, but that comes with the determination and going hard everyday in practice. We’re a talented group, but we have to still work hard and do the little things, like all the fundamental things and stuff out there. This is a great group of boys, I’ve been with them the past six or seven years. I know all of them, love all of them, and we just play well together, and that’s how we won four straight.”