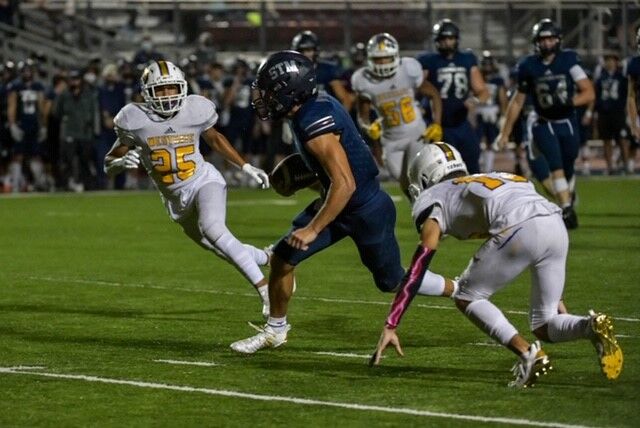 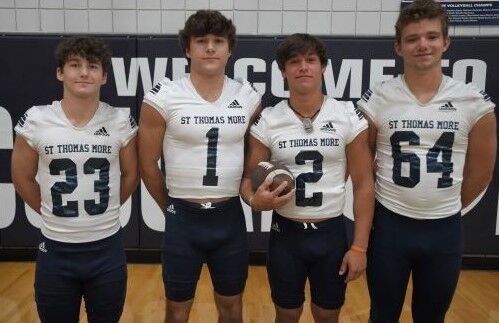 There aren't too many teams that can contain the St. Thomas More Cougars passing attack, but the Westgate Tigers appeared to be one of them.

The Tigers pulled off an upset victory over the Cougars last season in a physical contest, but this year was a different story. The Cougars passing attack was just too much to contain, and they redeemed themselves against the Tigers with a 54-12 victory Friday night at Cougar Stadium.

The Cougars set the tone in the first half, and while the Tigers put up a fight down the stretch, it wasn't nearly enough to slow down quarterback Walker Howard and company.

“It was a physical game,” Cougars head coach Jim Hightower said. “Hard-hitting game, I thought our kids went out and made some big plays. We had some great execution, really good catches made by a host of receivers. We just took advantage of what they (Westgate) were showing us. Between Walker (Howard), Jack (Bech), Carter (Arceneaux), Paxton (Perret), we have some weapons. They all stepped up and made some plays when they had the opportunity.”

Howard ended up throwing for 258 yards on the night and a season-high six touchdowns to four different receivers.

“He (Howard) just keeps getting better,” Hightower said. “They were giving him a lot of different looks. He was having to adjust to a lot of stuff on the run, but I thought he did a fine job of finding our open guys.”

Senior wide receiver Jack Bech was once again one of Howard's go-to weapons, and he finished with three touchdowns on the night and redeemed himself after being knocked out of last year's contest against the Tigers in the second quarter.

“Last year we had a heartbreaking loss (against Westgate),” Bech said. “I came out in the first half, so being able to play the entirety of the game and put up three touchdowns was big. Our offensive line played great, Walker Howard played great, all the receivers played great, so props to all of them.”

“It feels really special,” Bech said. “Just all the days we put in a lot of work, a lot of different motivational factors. It’s been fun on the journey to be able to break those records held by some big legends at this school. It’s just been a fun journey, and I’m excited for where things are going in the future.”

The Tigers offense kept fighting in the second half led by quarterback Brennan Landry and wide receiver Dedrick Latulas, but the Cougars defense held strong and won the turnover battle with three fumble recoveries and two interceptions.

"Our defense just had to keep hanging on," Hightower said. "They were very physical, had a good plan of action, and I thought our kids hung in there and kept playing hard. They played hard throughout the whole ballgame. I'm real proud of our defense. They just kept hanging in there and created some turnovers and took advantage of balls on the ground.”

It was a huge win for the Cougars to open up district play, and they now sit at 4-0 and appear poised to keep their winning streak going.

“A win is always good, and a district win is big,” Hightower said. “They’ve got some quality players over there at Westgate, and the coaches do a great job. Anytime you can beat a good football team, that’s something to be happy about. We’ve got Tuerlings next week that's always a battle, and we've got Carencro right behind them, so we’ve got some ballgames yet to be played.”