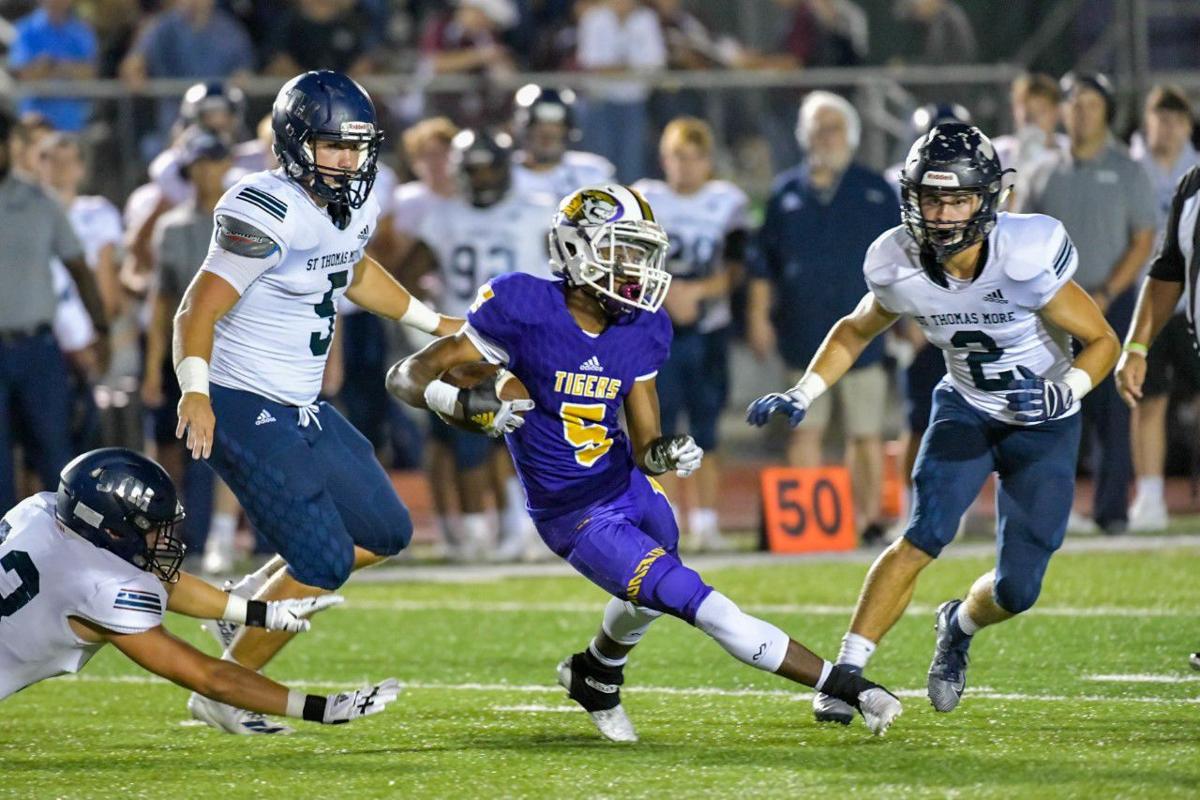 Westgate running back Kevion Sophus cuts through the St. Thomas More defense during the Tigers' 24-21 win against the Cougars on Friday, Oct. 11, 2019, in New Iberia. 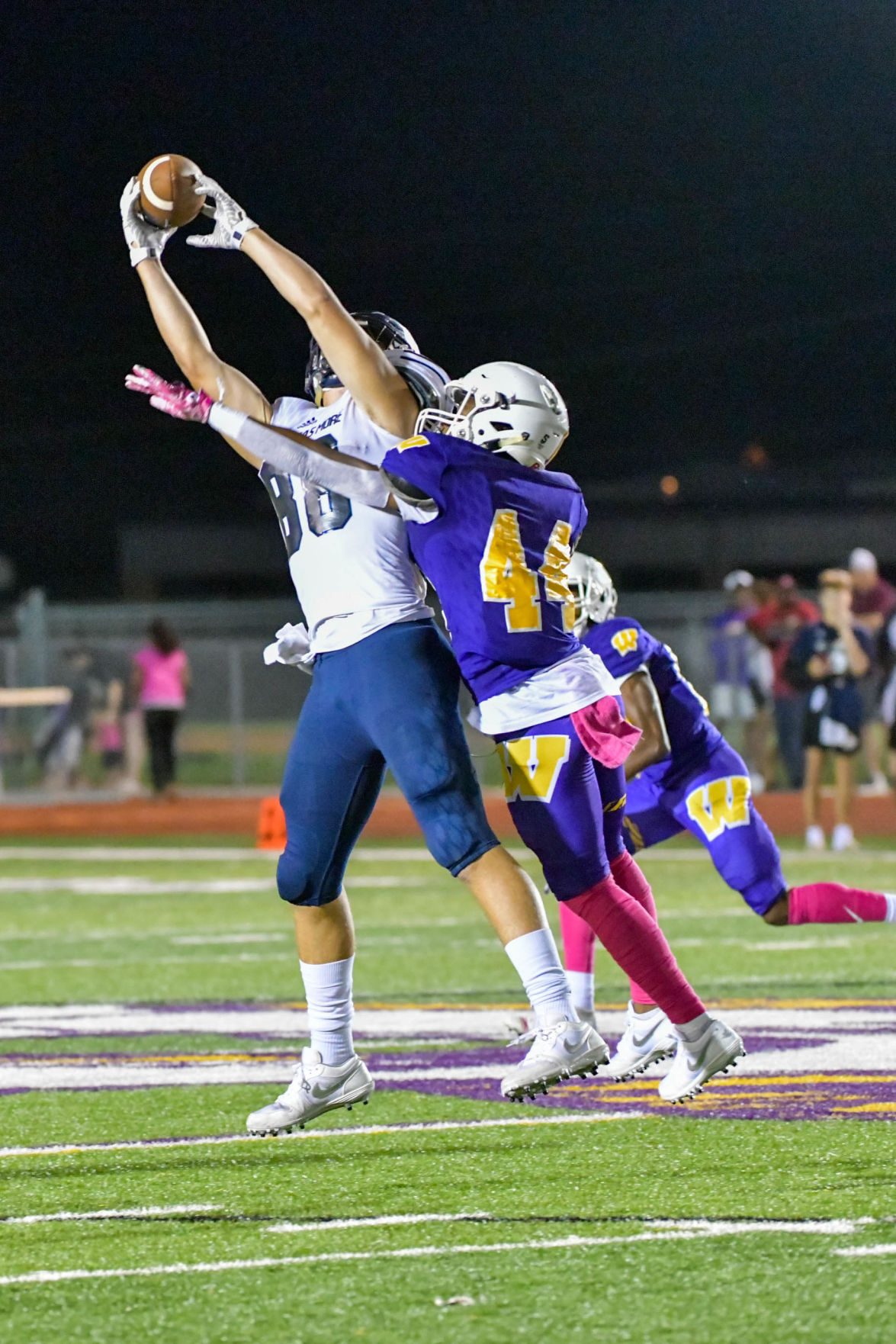 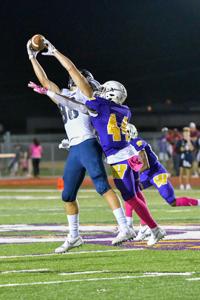 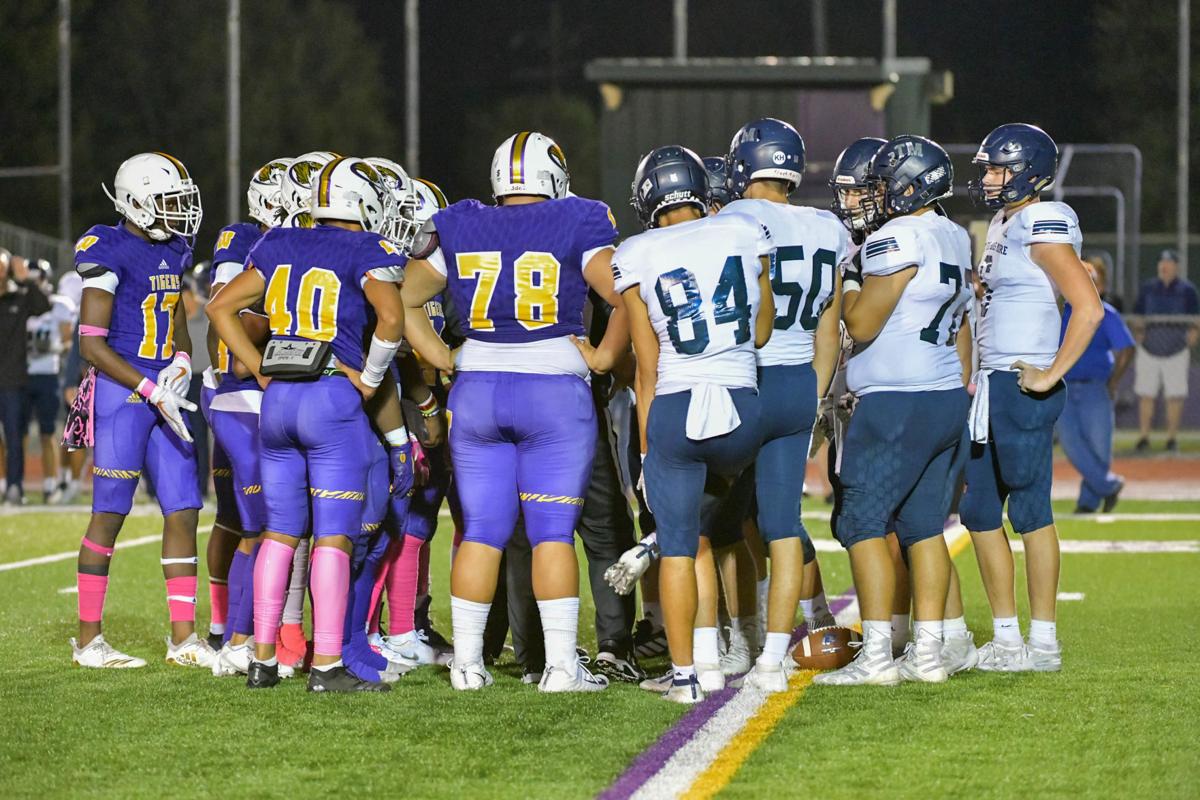 Westgate and St. Thomas More players huddle around game officials during an emotional district contest between the Tigers and Cougars. Westgate won the game 24-21 to move to 5-1 on the season.

Westgate running back Kevion Sophus cuts through the St. Thomas More defense during the Tigers' 24-21 win against the Cougars on Friday, Oct. 11, 2019, in New Iberia.

Westgate and St. Thomas More players huddle around game officials during an emotional district contest between the Tigers and Cougars. Westgate won the game 24-21 to move to 5-1 on the season.

NEW IBERIA — It seemed as if no one outside the West End of New Iberia gave Westgate even a puncher's chance against top-ranked St. Thomas More, but coach Ryan Antoine's team knocked off the Cougars 24-21 at home in Friday's District 5-4A opener.

"I love what Connor Scott did," said Antoine, who mentioned earlier this week that the senior could play a big role. "Making that field goal at the end of the game, that was a big weapon for us."

From the opening drive, it was clear that the Tigers were ready to tussle.

STM (4-2, 0-1) received the kickoff and drove to the Westgate 36-yard line, only to be stopped on downs for the first of three times in the first half.

"(Coordinator Ryan) Stewart and the defensive staff did an amazing job getting our guys motivated and ready to play," Antoine said. "They took the challenge head-on. A lot of people doubted us, a lot of people thought we were going to get blown out.

Later in the first quarter, Westgate was faced with a fourth-and-10 from its own 46, but a roughing the punter penalty gave the Tigers a fresh set of downs.

Seven plays later, sophomore Danny Lewis entered the game at the Wildcat position and punched it in from four yards out to give the Tigers a 7-0 lead with 3:36 remaining.

Lewis' scamper was set up by two successful third-down passes by quarterback Brennon Landry, who completed 26 of his 38 passes for 195 yards and a touchdown.

"We told Brennon to just find the guys," Antoine said. "Makholven (Sonn) made some big plays on third and fourth down. We did drop some balls, so we have to fix those things. But I'm just happy that our guys executed when we needed to."

On its ensuing possession, STM marched 67 yards to cut the margin to 7-6 on an 8-yard pass from Caleb Holstein to tight end Luke Howard, who led the Cougars with six catches for 67 yards.

Westgate had another apparent touchdown nullified when Sonn hauled in a reception in the left corner of the end zone but was flagged for offensive pass interference.

"When we looked at it at halftime and it was 7-6, we felt that we should at least had 21 points," Antoine said. "We told our guys to stay with it. We went back to some stuff we have used the previous week like using Kayshon (Boutte) a little bit more out of the backfield."

After being limited to one yard in the first half, Boutte scored on a 17-yard sweep to give the Tigers a 21-14 lead early in the fourth quarter.

"That's what Sophus has been doing for us these last four games," Antoine said. "He's been playing tough and playing hard. He's versatile, good in the backfield and also out of the backfield, and we love the weapon that he is."

Sonn, who caught nine passes for 91 yards, hauled in a 9-yard touchdown strike from Landry on the first possession of the second half. The drive was sparked by a 35-yard kick return by Sophus.

"We've been playing well for the last month," said Antoine, whose team has won five straight after a 7-0 loss at Lafayette Christian in Week 1. "We played a good, tough game. We play with passion. We feel that any day of the week, passion is going to beat technique."

Both teams struggled to control their emotions as 22 penalties were assessed during the game, 11 of the 15-yard variety.

"It was on both sides," Antoine said. "You have a big game with two 4-1 teams playing in this type of atmosphere. You have to let our guys play. (STM coach Jim) Hightower and I were both saying the same thing. Let us play, let us get through it. Yeah, it's going to be a little chippy, but it's supposed to be.

"This is a playoff-style atmosphere, a playoff-style game. Our guys didn't back down. They're the No. 1 team in the state, and we weren't running from them. We told our guys, 'You keep playing and playing with that passion.'"

Trailing 14-6 in the third quarter, STM drove into Westgate territory where the drive appeared to stall after Holstein's pass to receiver Jack Bech was broken up by cornerback Blayne Delahoussaye.

"They called a taunting penalty on Blayne," Antoine said. "When Blayne stood up, they said he stood over Bech too long. I didn't see it, but we told our guys to keep playing."

Bech, who grabbed seven passes for 66 yards, was sidelined following the play after injuring his back.

Given new life by the taunting penalty, the Cougars evened the score at 14 on a 15-yard pass from Holstein to Patrick Robichaux and a two-point conversion with 3:51 left in the third.

Holstein completed 27 of his 52 attempts for 222 yards, including a 15-yard touchdown to Carter Arceneaux early in the fourth quarter.

With 6:53 remaining, however, Louisiana-Monroe safety commitment Keydrain Calligan intercepted a Holstein pass and returned it to the STM 31.

"Man, they were able to stress us for sure," said STM offensive coordinator Shane Savoie. "They obviously have some individual talent that makes them unique. I was really impressed with their secondary. They just do a really good job of coaching those guys.

"They had a great plan for us. They matched our personnel and were able to execute. They put us in some one-on-one battles where we won a few and lost a few, but we couldn't win the ones that mattered. That was the difference in the game."

On fourth-and-two from the 20, Westgate lined up for a field goal but shifted to the Wildcat formation prior to the snap with Lewis carrying for a first down that helped set up Scott's game-winning field goal.

"I've been at this school for 10 years, and for us to play a team like STM and beat them, it's big," Antoine said. "They've always been our nemesis — a team we could never beat.

"It's not the Super Bowl. But it's a program-defining win, and I'm glad where the program is going. Four or five years ago, we were 0-10. So for us to be able to beat the number one team in the state at our house, you just saw emotions come out."

NEW IBERIA — The New Iberia Yellow Jackets may have been winless through five weeks, but still were able to sting high-flying Lafayette High w…