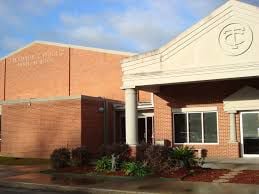 “It was a clerical error,” Masson said. “I had two progression sheets, and I mixed them up.”

The incident came in the Jacob McMillan Invitational at Lafayette High the week before Christmas.

In the process of putting in the lineup, the wrestler eligible for 145 wrestled in the 138-pound weight division and vice versa. That made one of them eligible and the other “wrestled illegally.”

Masson said he noticed the mistake the day after the tournament and turned himself into the LHSAA on Monday morning upon returning to school.

Under Masson, Teurlings has won seven Division II state championships in the past nine years and finished in the top three over the past 13 seasons. His Rebels were the state runner-up last season.

“I don’t feel like the punishment fits the crime, but there aren’t really any other options in the handbook,” Teurlings principal Mike Boyer said. “There’s not a tiered system like in other sports. It is by far the toughest penalty code of any sport in the LHSAA handbook.”

Masson is heavily involved in the state’s wrestling scene as the Division II state coordinator. He supervises hydration tests in the area and monitors Division II activities.

He denies doing anything to "circumvent" the rule book.

“One mistake and I’m done for the year,” Masson said.

“I understand the error that was made,” Boyer said. “It was just mixing up the numbers between two kids. The rule book says “wittingly or unwittingly” and I understand that. It makes sense.

In his place, longtime assistant Brad Macha will take over as the interim head coach. That began this past weekend with the Rebels cruising to their third straight parish duals crown at Carencro High.

Masson also serves as the team’s bus driver on the road trips and he won’t be allowed to perform that function until Dec. 17, 2020.

“What makes it even tougher is that it’s really a two-season penalty — the rest of this season as well as the first half of next season,” Boyer said. “That’s pretty tough.”