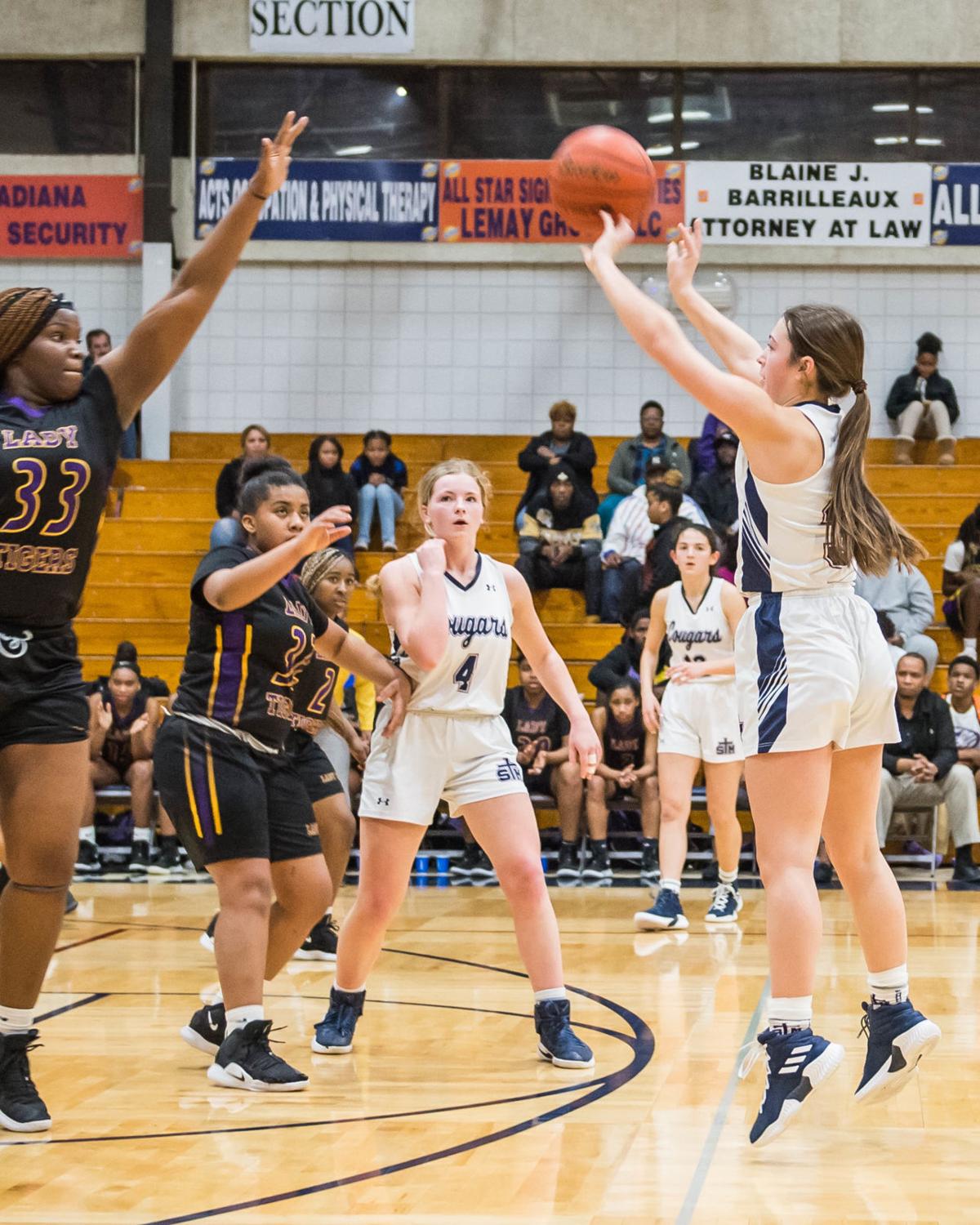 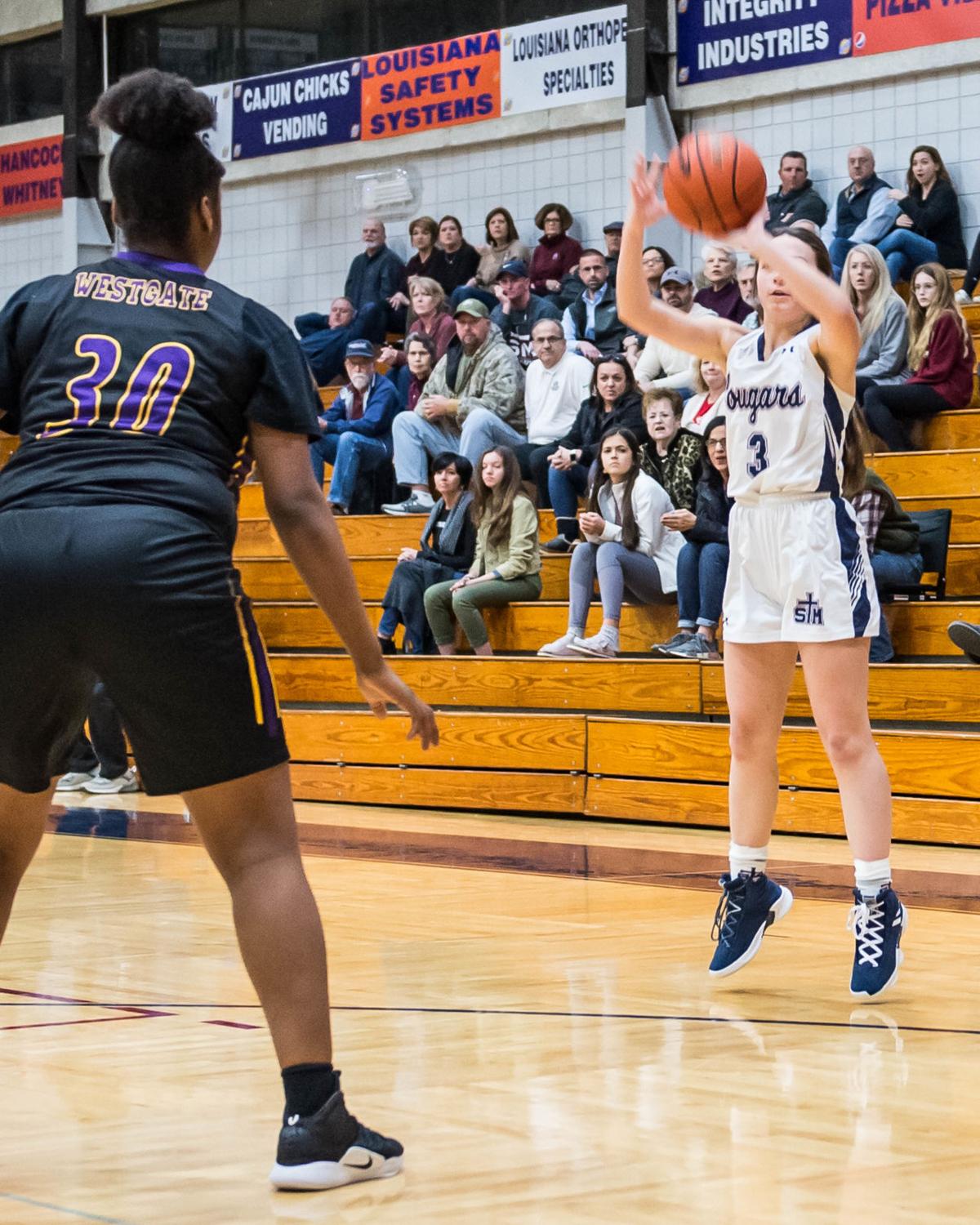 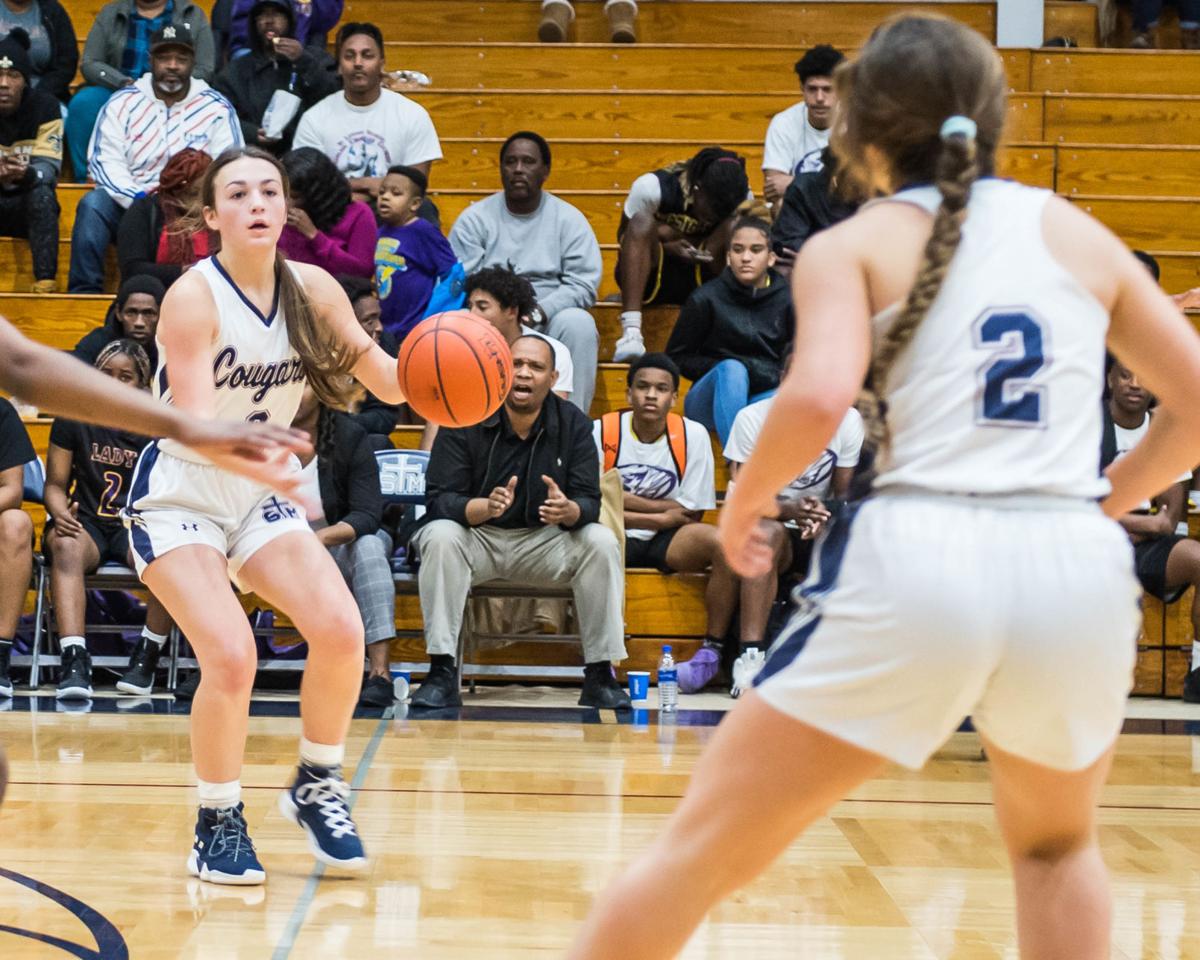 Claire Hader (3) passes the ball to her teammate Angelle Doucet (2) as the Westgate Lady Tigers travel to Lafayette to play the STM Lady Cougars in a District 5-4A matchup on Friday, February 7, 2020.

Claire Hader (3) passes the ball to her teammate Angelle Doucet (2) as the Westgate Lady Tigers travel to Lafayette to play the STM Lady Cougars in a District 5-4A matchup on Friday, February 7, 2020.

“I remember last year there was a game where she was 0 for 7 in the first half from the 3-point line,” Cougars coach Stephen Strojny said. “I mentioned something to her about possibly trying to get another look, maybe try to get to the rim a little bit more.

At this point, Strojny doesn’t really have to make suggestions when Hader gets cold from the perimeter. She’s matured as a player and understands when driving to the basket, using either hand, is a better option. Improving as a free-throw shooter has also helped her shake off slumps from the outside. Trust has developed between Hader and her coach over time.

But, ultimately, Hader lets it fly from beyond the arc because she’s never been afraid to miss. She rarely approaches anything with apprehension. Strojny said even as a freshman Hader was willing to voice her opinion amongst her teammates. She’s always taken pride in playing defense because “I just don’t like to be scored on.”

“Defense is all hustle, and it’s all what you can control,” Hader said. “I just like to play as hard as I can, and I know that, if my shot is off but I’m playing good defense, coach will keep me in the game. That was kind of what was most important — just staying in the game, helping my team in any way I could.”

But Strojny had to be frank with Hader during her exit meeting at the end of last season: Her shot mechanics needed work. She’s left-hand dominant, but she was using too much of her right hand to put up shots, similar to how a volleyball player sets a ball. This led to inconsistency from the perimeter.

“I definitely shot with both hands because I started shooting 3s when I was too young, and I wasn’t strong enough,” Hader said. “So I just developed bad form and bad habits.”

Strojny told Hader that if she didn’t fix her form, she would need to change her style of play, perhaps becoming a pass-first point guard. Her minutes on the floor might also be at risk.

“She has a lot of awareness as an athlete, and I think she was also aware that there were a lot of kids younger than her on our roster that were good,” Strojny said. “I think she enjoyed playing and starting and being a focal point of her offense. I think she knew that if she didn’t get her shot fixed that it may be a possibility of her not having the amount of minutes that she’s had in the past in the future.

Hader’s offseason work started with frequenting the gym with her dad throughout the summer. Strojny said he advises players to knock down 150 game-speed shots a day in the summer, but most kids don’t “commit to doing it long-term.” Hader did.

The other thing Hader did during the summer was attend the Point Guard College’s shooting camp in Texas with her cousin. It was something Strojny had previously suggested to her, but Hader’s cousin helped sell her on it.

“She sacrificed a week out of her time during the Fourth of the July, which is pretty rare to see a junior do that,” Strojny said. “Most of the young kids, before they get their (driver’s) license, they’re really big into going to these summer camps out of state and staying over a couple of nights. But as kids get older, it’s harder to get kids to commit to going to developmental camps out of state.”

Hader has not just become a consistent shooter for the 18-8 Cougars, ranked sixth in the LHSAA Division II power ratings. She broke the school record for 3-pointers in a game by hitting nine against Northside on Jan. 28 — all in the first half.

She tied the record of seven in the first quarter, and none of her attempts were wild shots that happened to find the net. Strojny said only one of those nine 3-pointers hit the rim.

“The other eight were nothing but net,” Strojny said. “We had a lot of people kind of questioning it or didn’t believe me and thought we were exaggerating or lying or being facetious. So I clipped it all together in Hudl and put it out there for the whole world to view. So it is legitimate, but it was pretty remarkable to see.”

Hader actually had an opportunity to tie the program record for made 3-pointers in a game at St. Joseph’s Academy on Jan. 10. She was sitting on six made 3-pointers, but with the Cougars up by double digits late  — they ended up winning 69-54 — Strojny told his players they should only be looking for layups.

“I had a wide-open 3 on the wing, and I knew I couldn’t shoot it,” said Hader, who's averaging 13.8 points per game while making 40 percent of her 3-pointers. “I knew that it would tie the record, but I passed it up. After the game, I talked to coach Brooke (Womack) about it, and she really reassured me. She was like, ‘You’re going to get it. You giving up that shot for the team shows you’re selfless and shows that you deserve to get it.’ ”

Hader agreed with her coach’s sentiment and got her chance against Northside.

“I was really hot that night, so, yeah, I was counting,” Hader said. “At the beginning of the season, we wrote down our goals and mine was to break it. To see all my hard work paid off really motivated me and really helped this season.”