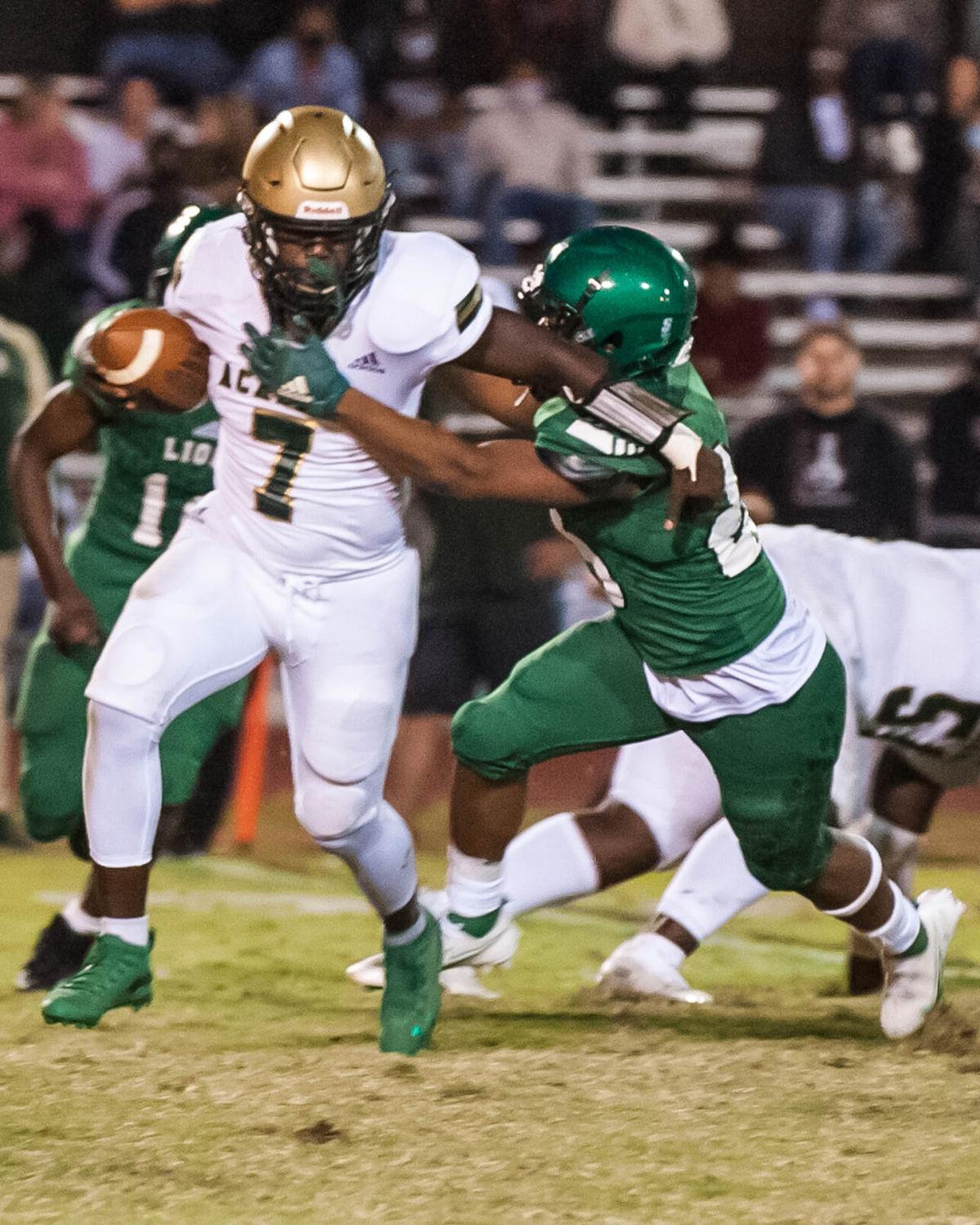 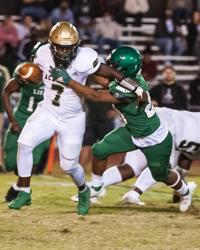 Acadiana quarterback Jerimiah Brown (7) tries to avoid the tackle attempt of a Lafayette High defender during the Rams' 34-12 win over the Lions. 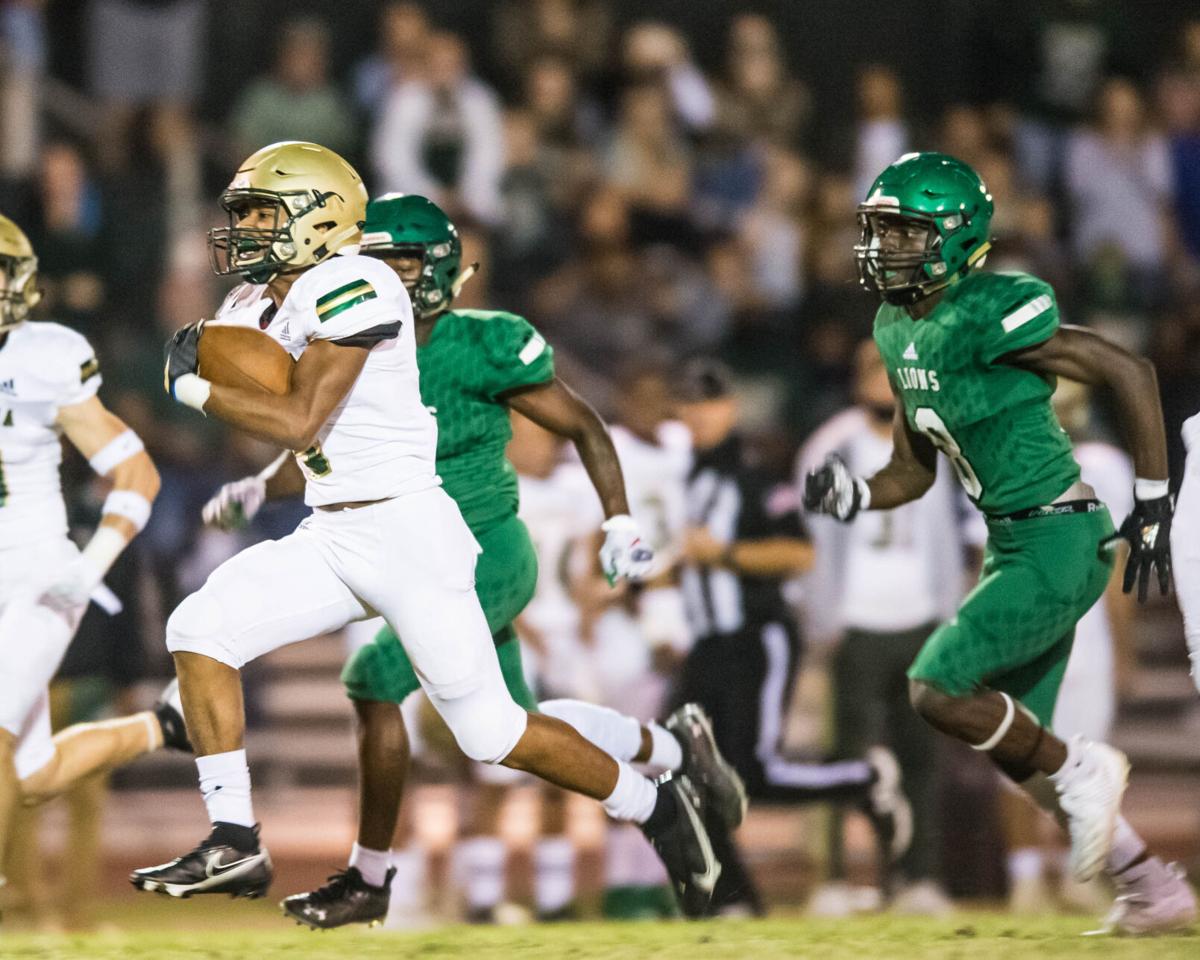 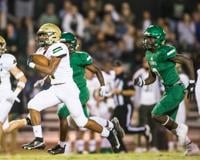 Acadiana's Kevan Williams (4) is off to the races on a 50-yard touchdown run during the Rams' 34-12 win over Lafayette High on Friday.

Acadiana quarterback Jerimiah Brown (7) tries to avoid the tackle attempt of a Lafayette High defender during the Rams' 34-12 win over the Lions.

Acadiana's Kevan Williams (4) is off to the races on a 50-yard touchdown run during the Rams' 34-12 win over Lafayette High on Friday.

All he saw was green.

When Acadiana High starting quarterback Jerimiah Brown spotted open space, he darted 66 yards for a touchdown. The rushing score came less than three minutes into the second half of Friday's game against Lafayette High, and quickly shifted momentum back to the Wreckin' Rams' side.

"I just saw green; that's all I saw — touchdown," Brown said. "It felt great to get my guys some momentum and get them hyped up to start the second half."

Using that momentum, the Rams put together a 20-point third quarter and pulled away with a 34-12 victory over crosstown rival Lafayette High to clinch the District 3-5A title.

It marks the sixth consecutive district title for the reigning state champion Rams (6-1).

The rivalry showdown also marked the 50th time these teams have met in the regular season.

Coming off a heartbreaking 27-21 loss to Catholic-Baton Rouge less than a week ago — the program's first loss since November 2018 — Acadiana knew it would need to dig deep against the Mighty Lions (5-1).

"We were hard on ourselves this week because last week we lost for the first time in a while," coach Matt McCullough said. "I thought we came out and were more physical this week; I thought we played hard. We made a few mistakes by dropping the ball on the ground a little bit, but we definitely were much better up front. If we hold on to the football, we'll be fine down the stretch."

The junior Brown totaled 108 yards with a pair of touchdowns on the ground and added 41 yards on 2-of-7 passing, while sophomore running back Kevan Williams ran for 105 yards and a pair of scores of his own on 11 carries. Senior Tyvin Zeno tallied 81 yards and a touchdown.

"It felt good to come back after the loss," Brown said. "I mean, I don't know who wants to get in front of a mad Ram. We dropped a few balls in the first half, but in the second half we got it together and we put up some points."

The team combined for 323 yards and five touchdowns on 43 carries.

"Offensively I think we played well," Williams said. "The first half was alright, but the second half I really feel like we did good ... the backs played well, our quarterback Jerimiah played great. We're just working on staying together as a team and accomplish our goal, which is a championship."

Defensively, Acadiana forced eight punts and applied constant pressure in the Lafayette High backfield. As a unit, the Lions managed just 22 yards on 24 carries and recorded only five first downs. Senior Ram linebacker Nick Carrier picked off a pass in the second half.

The Rams won the battle of field position, beginning six of their 13 offensive possessions inside Lafayette territory to set up the offense nicely on nearly half its drives.

Behind a pair of first-quarter rushing touchdowns — a 50-yarder from Williams and a 20-yard rushing score from Zeno — the Rams controlled much of the first half.

It wasn't until the 1:26 mark of the second quarter that the Lions jumped back in the game. Thaos Figaro broke through the line and blocked an Acadiana punt attempt before scooping the ball up and taking it 50 yards the other way for the score. The failed 2-point conversion made it just a 14-6 deficit heading into halftime.

The momentum was short-lived as Brown's long rushing touchdown came just four plays into the Rams' first drive of the second half.

Later in the quarter, a 17-yard touchdown run from Williams and a 22-yard score from Brown over the span of 1:24 capped the scoring for the Rams.

Grayson Saunier added a 3-yard rushing score for the Lions with just 5 seconds remaining on the clock.