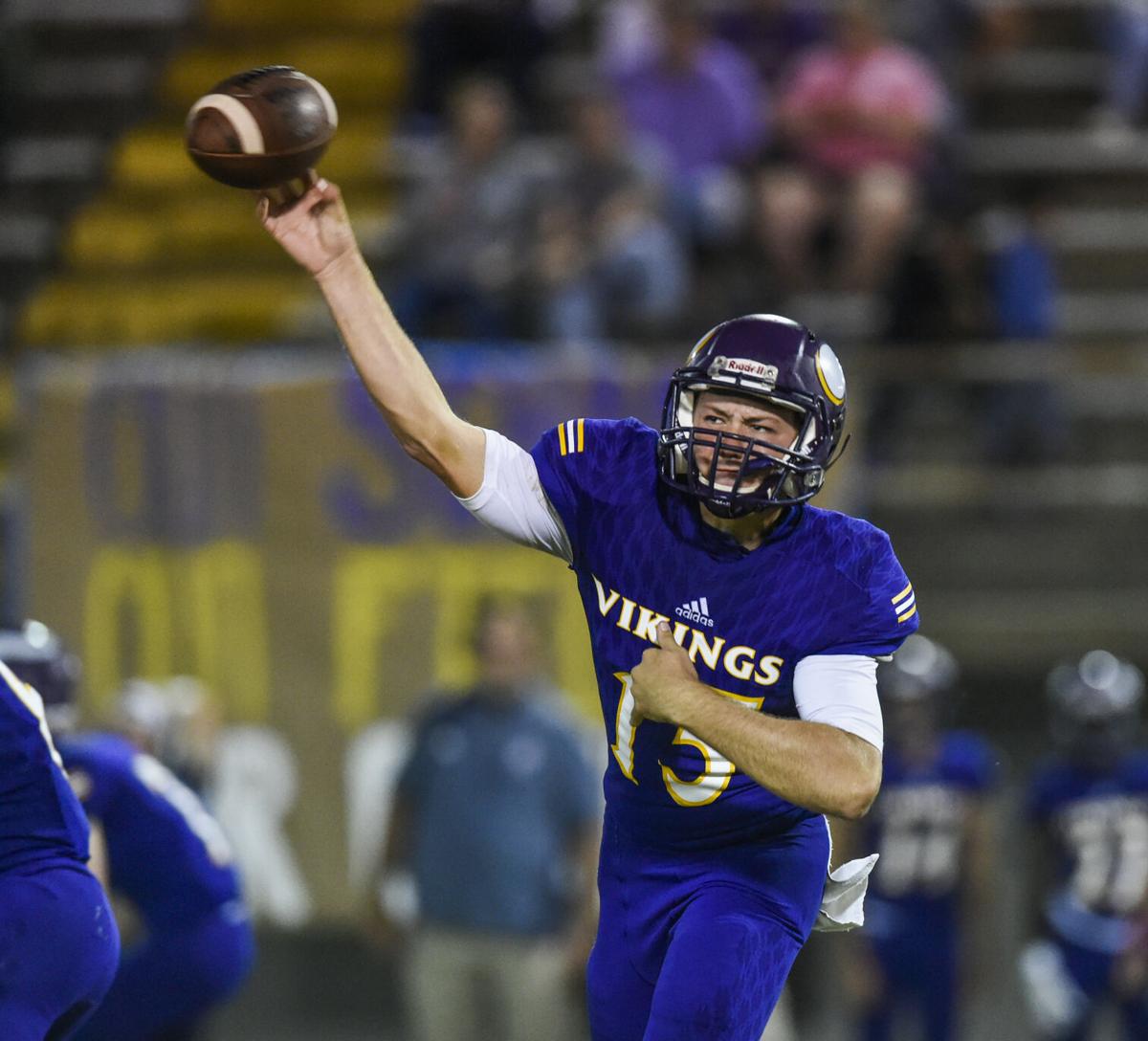 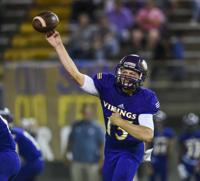 Opelousas Catholic quarterback Drake Guidry threw for 347 yards and five touchdowns and also ran for a score during the Vikings' 41-39 loss to Port Allen on Thursday at Donald Gardner Stadium. 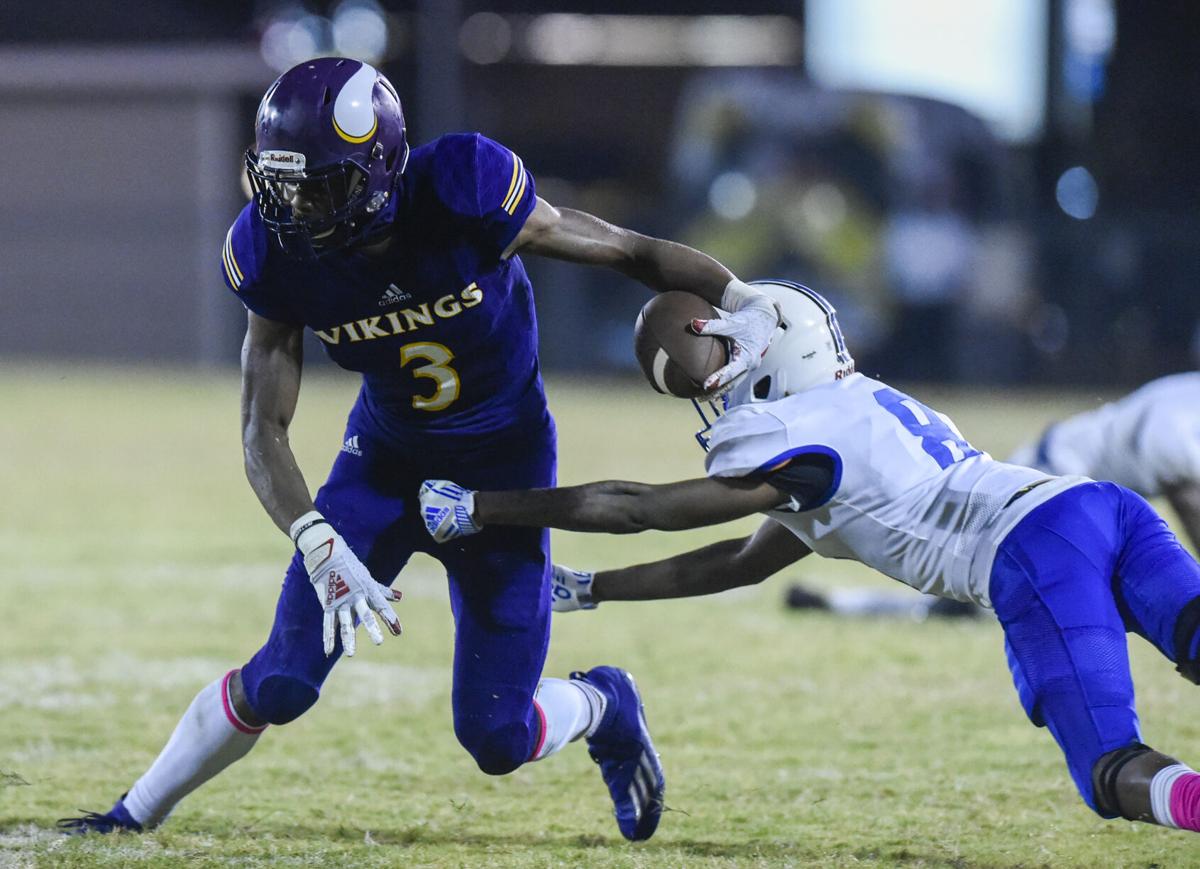 Opelousas Catholic quarterback Drake Guidry threw for 347 yards and five touchdowns and also ran for a score during the Vikings' 41-39 loss to Port Allen on Thursday at Donald Gardner Stadium.

Moments after Opelousas Catholic's frustrating 41-39 home loss to Port Allen on Thursday at Donald Gardner Stadium, it was hard not for coach Thomas David to focus on the miscues and puzzling calls behind the loss.

The game was three hours of shaking his head over special teams mistakes, fourth-down nightmares and officials rulings.

“We just shot ourselves in the football too many times,” David said. “Special teams mistakes, offensive drops, a bunch of missed opportunities. They’re a good team, now. They’ve got a ton of talent with a bunch of team speed, so when you screw up, they make it hurt pretty quick.”

Guidry was  in the middle of those comeback attempts for the Vikings (1-2). He completed 25 of 40 passes for 347 yards and five touchdowns, as well as running it six times for 28 yards and a sixth score.

“For a first-year starter, he’s been a guy that’s kind of been waiting in the wings,” David said of Guidry. “He’s got a ton of talent. Very intelligent kid, does a great job, has a talented arm. This is start three for him. He’s come a long way. He still has growing pains at times, but he found his rhythm tonight and really played well.

“Hopefully, this is a launching pad. I think he continues to improve as we go, because he’s a sharp kid and he’s got some chicken wing talent for sure.”

Down 27-13 and 34-19 in the second half, Guidry just kept firing away to keep the Pelicans nervous.

First came a 23-yard touchdown pass to freshman Mark Collins. Then Guidry willed a touchdown on a drive complicated by a few dropped passes with a 10-yard TD strike to Cade Theriot to stay make it 34-25 with 10:23 left to play.

The prettiest play was a 30-yard touchdown pass over a defender and into the hands of leaping receiver Kamron Levier to atone for some earlier disappointment.

“The kid has a ton of talent,” David said of Levier. “He kind of had a rough night early and then made a play when it counted. He never got down on himself, kept competing and when the opportunity came at the end to make a big play, he did.”

An onside kick ended up out of bounds to prevent any more late-game heroics.

“We competed,” David said. “We played hard. We got back in it and kept getting back in it. We just couldn’t get over the hump.”

The big reasons for that occurred in the first half. Leading 7-6 late in the first quarter, a fourth-and-one try from the OC 49 was thwarted by an illegal procedure call that forced a punt.

On the ensuing possession, Port Allen threw an incompletion on fourth down. Only it didn’t give the Vikings possession. Instead, a delay of game was marked off despite David's furious objections.

The Pelicans turned that into a 45-yard fake punt return for a touchdown by Darius Jarrett to give Port Allen the lead for good at 13-7 with 11:40 left until halftime.

“We had some issues going on fourth down a couple times,” David said. “We get one, then we have a penalty. We go from converted a fourth to having to punt. Then they go out on fourth and we get the phantom delay of game call with no whistle, which how is that possible?

“Then they line up for a punt, fake the punt and score a touchdown. We had a calamity of errors at times that kind of cost us.”

The Vikings yielded 268 yards rushing to the Pelicans, who got three touchdowns from Franklin, including the clinching touchdown reception. His two touchdown runs came on counter plays.

“We had guys kind of missing their assignments and getting out of position,” David said. “They’re pretty good at finding the seam and hitting it. They ran hard. They ran through some arm tackles. We didn’t square them up very good at times.”