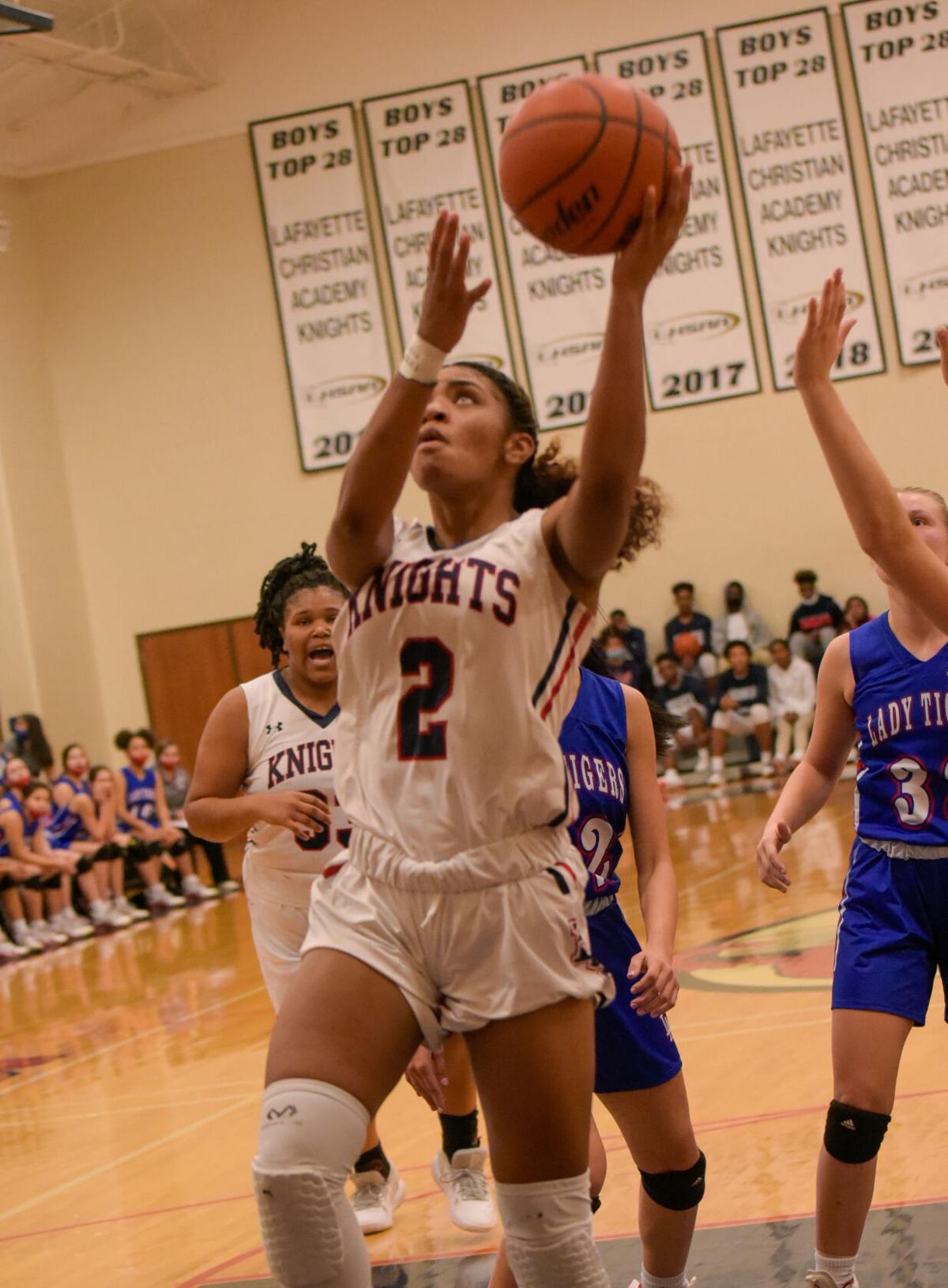 LCA senior point guard Zoe Wiltz (2) looks to lead the Lady Knights to a state championship as the only returning starter from last season. 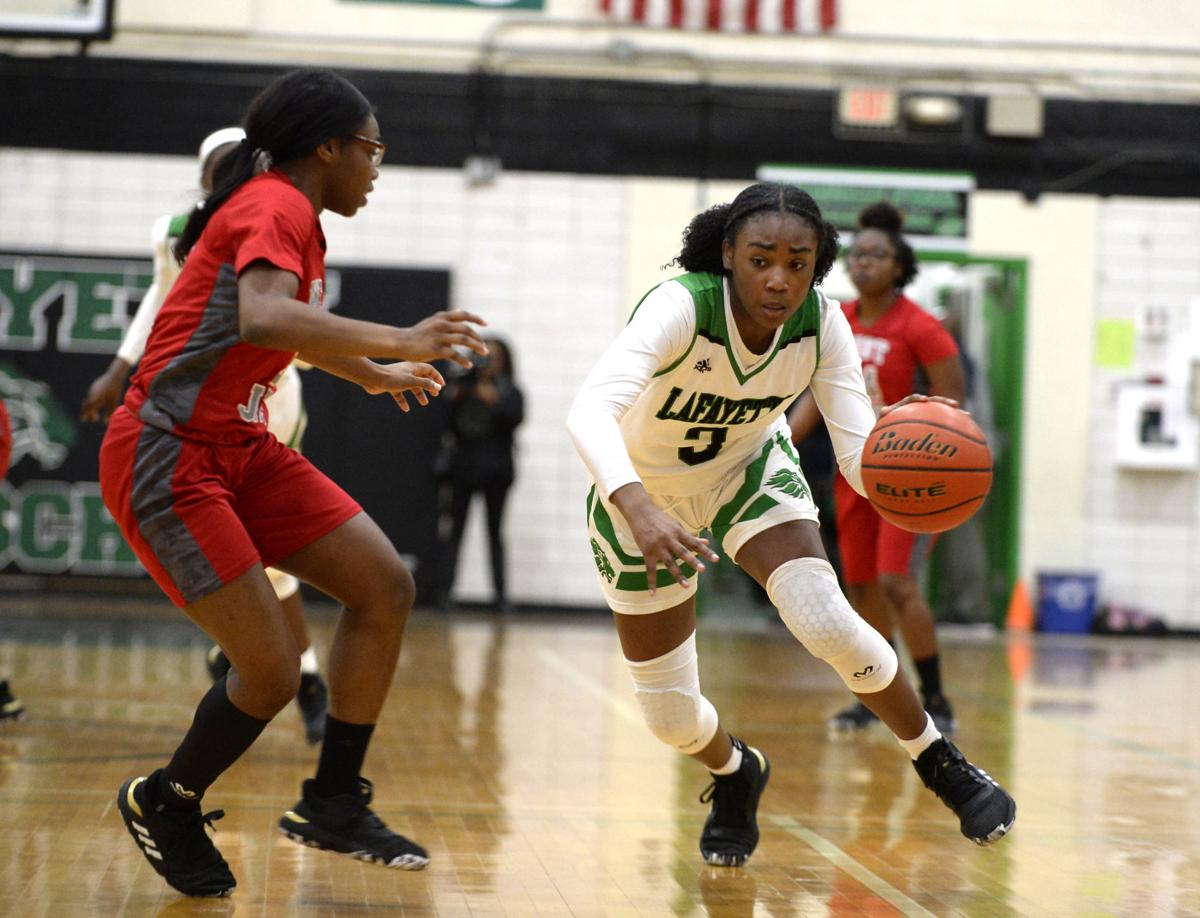 Lafayette High's Chrysta Narcisse (3) led the Lady Lions in scoring with 23 points in a 62-38 regional round victory over Northshore to advance to the Class 5A quarterfinals. 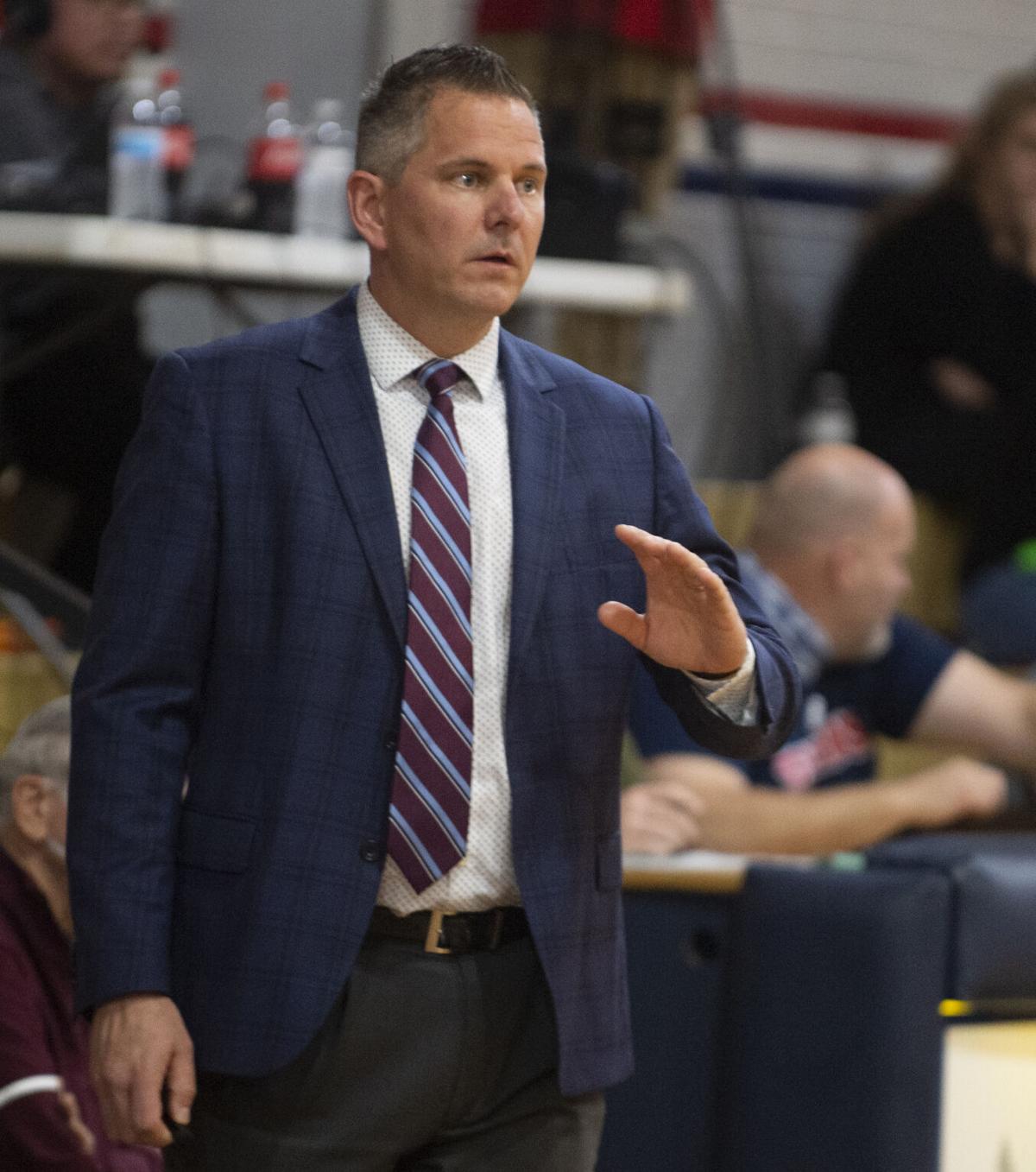 LCA senior point guard Zoe Wiltz (2) looks to lead the Lady Knights to a state championship as the only returning starter from last season.

Lafayette High's Chrysta Narcisse (3) led the Lady Lions in scoring with 23 points in a 62-38 regional round victory over Northshore to advance to the Class 5A quarterfinals.

The Lafayette High girls basketball team have been a force to be reckoned with this season.

The Lions faced a two-week quarantine last month, but they haven’t lost a game since returning to action and  draw the No. 2 seed in Class 5A and be on the opposite side of No.-1 seeded Ponchatoula.

“We're content with where we are,” Lady Lions coach Tarunye Kanonu said. “We’ve been playing pretty consistently. We were fortunate to get some quality opponents in before we had to quarantine. We’re definitely growing and gaining more experience, and I’m happy with the progress of my group this season.

“We were fortunate to play (Ponchatoula) early in the season. I feel like we’re capable of playing with them. I’m glad that if we were to see them that it would be in the finals. Anybody in the top 10-13, you can’t look past. You’ve just got to take it a game at a time in single elimination and stay focused.”

The Lions went 15-3  and will be trying to break through and contend for a state championship in March.

“They’ve really put in the work this offseason to grow,” Kanonu said. “It helped us a lot in terms of us getting hungry now and wanting a championship. We’re willing to do what it takes to get to that level. That’s been our goal since the beginning of the season. All we can do now is push toward achieving our goal.”

The Cougars are led by a trio of seniors in Claire Hader, Olivia Guidry and Angelle Doucet. Last year they reached the semifinals.

“You’re only as good as your senior leadership,” Strojny said. “Three of our seven seniors have been starting all four years. They’re a very unselfish group. We have 7-10 kids capable of scoring 20 points a night and play 8-12 kids, so it takes unselfish kids.

"We have a lot of underclassmen who’ve added to our depth and culture of unselfishness. Claire and Olivia score a lot, but we have A.C. Froehlich, Sophie Perkins, Izzy Carter all capable of scoring 20 a night."

The Cougars have only lost three games this season and will go toe-to-toe with  a strong Division II bracket.

“It (No. 4 seed) is good to continue playing at home," Strojny said. "We’ll have work cut out for us in the first round against Vandebilt. I’m not one to look past a round, but we’ll likely have Ben Franklin after that and hopefully on to the final four."

"St. Louis is arguably the second best team in the state behind Ponchatoula. We’re on their side of the bracket, so we’ll have our work cut out for us. We have played some good opponents. We’ve become accustomed to upsetting higher seeds, so we’re not going to duck anybody. Our new assistant Brooke Richard has done a great job and has been a blessing to our program.”

If there’s a team that one can count on to represent the Acadiana area well in girls basketball, it’s Lafayette Christian.

The Knights saw the return of Errol Rogers as head coach this season along with some new faces in the starting lineup, and their tradition continued en route to the No. 1 seed in Division III.

“It doesn’t matter if you get No. 1,” Rogers said. “You’ve just got to go play. We played a tough schedule and were lucky to beat some really good teams in 4A, beat Lafayette High. I’m proud of what we’ve done, but it’s one-and-done now. You don’t get a second chance.”

“Our senior leader Zoe Wiltz is our only returning starter. She’s been playing since eighth grade and is our second or third leading scorer next to our big girl Monique Patterson, and our leading scorer is Jada Richard, a freshman. We have four new starters and a total of three seniors and two freshmen. I’m just glad they were able to come together.”

The Knights will look to take back the state championship after coming up a game short last season, and they will be fresh after not playing the past two weeks because of scheduling issues.

“We had games get cancelled on us, so we’ve just been getting after it and practicing hard,” Rogers said. “We had a couple of nicks and bruises, so that helped us out a lot. I think we’re capable of another state title run, but we’ll have to do it on the court. They’ve got some good teams with Episcopal, St. Thomas Aquinas, St. Charles, Newman, so it’s not going to be easy whoever we play. We’ve just got to be prepared to step out there and play our best."

Kaplan handled business in the regular season as evidenced by their 19-4 record, and that consistency paid off in a No. 5 seed in a Class 3A bracket filled with Acadiana area teams.

The Pirates are led by senior Alyia Broussard and appear ready to make a deep playoff run.

“We’re really excited to be seeded in the top five for the potential of back-to-back home games,” Lady Pirates coach Amelia Broussard said. “It would’ve been cool to be top four, but it’s not that much different. I’ve got respect for any of those teams in the playoff bracket. Our side is tough.

"We’re playing pretty good ball right now, the girls look sharp. We’ve got some seasoned players. We’re learning more and getting more experience with specific game situations and seeing them respond as a team and individually stepping up.”

The Pirates have not made it past the quarterfinals in recent seasons.

“I like to focus on the challenge in front of us and just take it a day at a time," Amelia Broussard said. "I suppose if we can do it, this would be the year. We certainly would be expecting to make it to the quarters and semis, and hopefully the championship. That would be awesome. The seniors that have been around are hungry for that next round of the playoffs. Hopefully they can break through."

When discussing girls basketball programs  on the rise in recent seasons, Highland Baptist should be in the conversation.

That’s because the Bears have made the quarterfinals the past two seasons. They are now aiming for a state championship as the No. 2 seed in Division IV.

“I’m proud of this team and what we’ve been able to accomplish,” Bears coach Carol Sensley said. “So far the girls have just been strong, resilient and have handled so many things thrown at them. Our girls have been consistent throughout and have been playing hard. They’ve been playing together and have the ability to defend. Having a veteran club helps with maturity and gelling together. Our guards sustain us, and we have a good inside game with Marin Barras. They’re very resilient and determined, and they have a will to win. You have to allow work to propel you, and we’ve done that this year.”

The Lady Bears have a strong group led by Barras, and own a 12-game winning streak.

“We definitely have our eyes set to be in the state tournament this year,” Sensley said. “Being in the present moment — if we can do that consistently, we can absolutely find ourselves in the state championship game, but we’ll have to take it one game at a time. It feels as though we can accomplish that with this team. We definitely would like to get over the hump.”