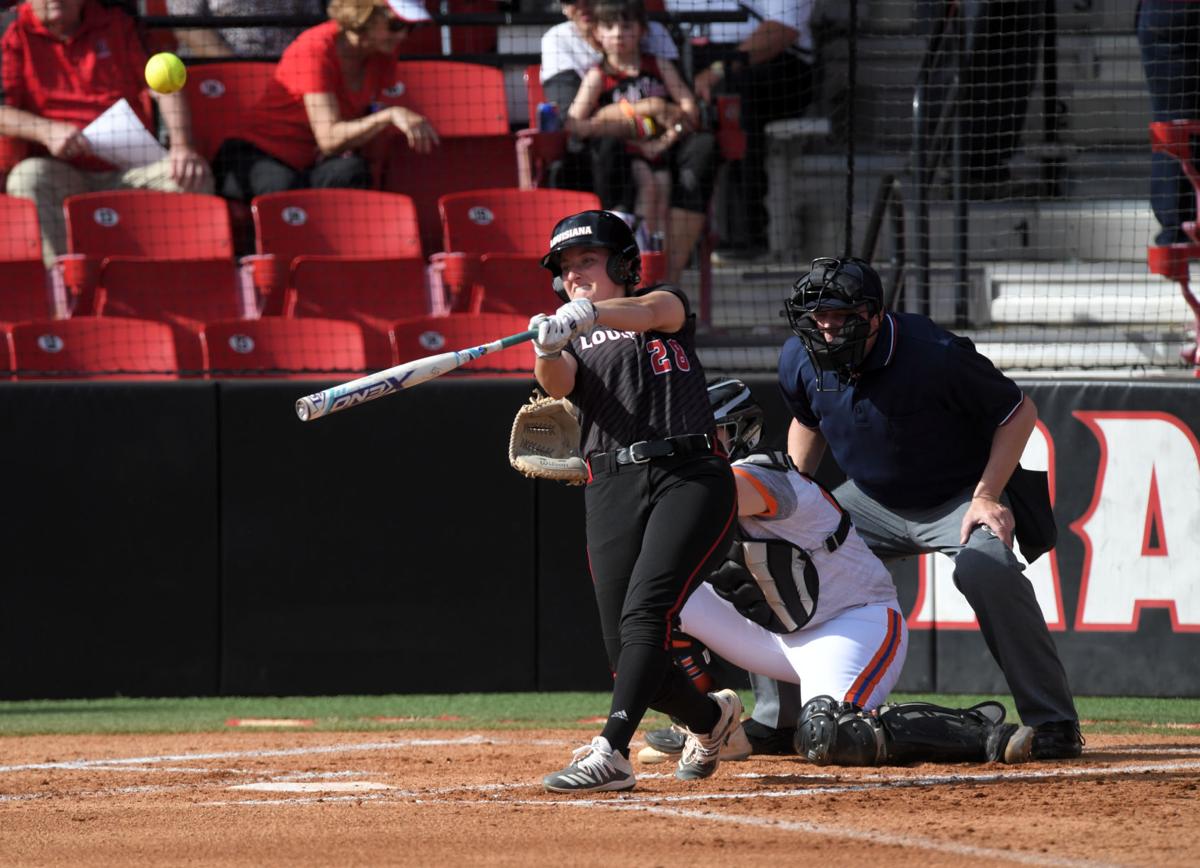 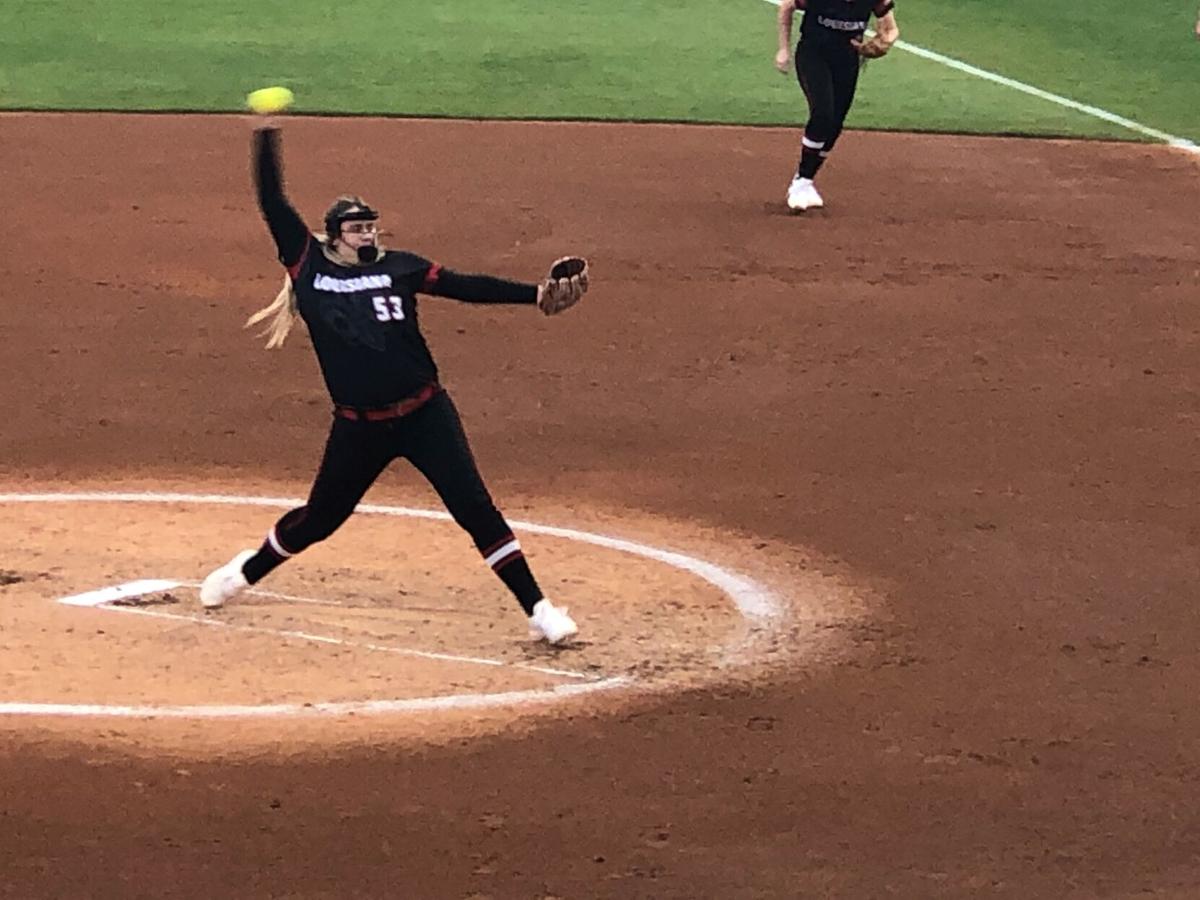 Kandra Lamb pitched 3.1 effective innings for the Cajuns at LSU on Saturday.

Kandra Lamb pitched 3.1 effective innings for the Cajuns at LSU on Saturday.

BATON ROUGE- In the first big test since the 4-0 home loss to LSU on Thursday, the No. 9-ranked UL Ragin’ Cajuns posted an impressive 7-1 win over previously undefeated, No. 10 Oklahoma State on Saturday at Tiger Park.

Then came the rematch with LSU and more disappointment for the Cajuns. The Tigers scored the winning run when a two-out bunt turned into a four-base throwing error to give LSU a dramatic 3-2 win over UL on Saturday evening.

"I guess I should be sort of happy," UL coach Gerry Glasco said. "We got a top 10 against a very good Oklahoma State ball club. It's just so hard to lose like we lose when you don't execute. We just made too many mistakes We had that last game. We should have taken advantage and pulled a win out of it.

"We just weren't willing to do the things out team needed to do. You expect your leaders to execute. When they can't execute, it's very disappointing."

The Cajuns fell to 9-2 after the doubleheader split and will play Oklahoma State again at 11 a.m. Sunday at Lamson Park.

"We lost this game because of discipline and not being ready when the season started," Glasco said. "We had a lot of kids that weren't able to practice for a week and we played a price for it tonight.

"We've got the talent. We're in a lot better place now than what we were on Thursday night."

One day after Oklahoma State (12-1) swept LSU, UL jumped on the Cowgirls before they even got settled in with four runs in the top of the first.

The walks were critical because one of Glasco's biggest criticisms of his lineup's performance in Thursday's 4-0 loss to LSU was how many pitches outside the zone his hitters swung at. In the first inning of this one, taking pitches quickly became the norm.

Justice Milz then delivered a two-run single to right for a 3-0, before a fielding error by the catcher on Jade Gortarez’s ground ball gave UL a four-run lead.

Kaitlyn Alderink singled to lead off the second and scored on Dalton’s ground out.

Carrie Boswell later smashed a two-run home run to left for a 7-0 lead.

That was way more than UL ace Summer Ellyson would need. The right-hander didn’t allow any hits until the fifth, allowing two hits, one walk and striking out in 5.1 innings to improve to 4-1 on the season.

In the nightcap against LSU, the rematch was a very different game than the one at Lamson Park on Thursday.

The Cajuns finally got to LSU starter Shelbi Sunseri in the fourth with two runs. Kendall Talley got a bunt single and Dalton's sacrifice bunt was followed by Milz's RBI single. Two batters later, Bailey Curry's RBI single made it 2-1.

The Tigers had scored in the third when Aliyah Andrews singled with two outs and scored on Taylor Pleasants' RBI single to center.

UL game two starter Kandra Lamb was cruising along other than that, but then was pulled after giving up a one-out solo homer to left to Georgia Clark. Lamb allowed two runs on four hits, no walks and struck out three in 3.1 innings.

"I was elated with Kandra Lamb," Glasco said. "We could have left her out there, but I was just so tickled with what she did. I didn't want it to end disappointing for her. I wanted her to have her head held high. That's her first really big outing against a top opponent ad she held her own. I was tickled with where she's at."

That brought Ellyson to the circle as a relief pitcher.

The Cajuns got leadoff singles from Bryan and Talley to lead off the fifth. But Milz's line drive was caught by Pleasants and turned into an inning-ending double play.

That set up an even bigger gut-punch for UL when LSU scored on a four-base error with two outs in the bottom of the sixth.

UL got a one-out walk from Kaitlyn Alderink in the seventh, but Ali Kilponen came on to get the save.

In addition to playing without Taylor Roman and Raina O'Neal, Melissa Mayeux didn't join the team in Baton Rouge with a lingering illness.

"I was happy with the fight," Glasco said. "I was disappointed with the execution."

Foote: What a tangled web UL's softball season has been so far

Needless to say, the 2021 season hasn’t gone as planned for the UL softball team.