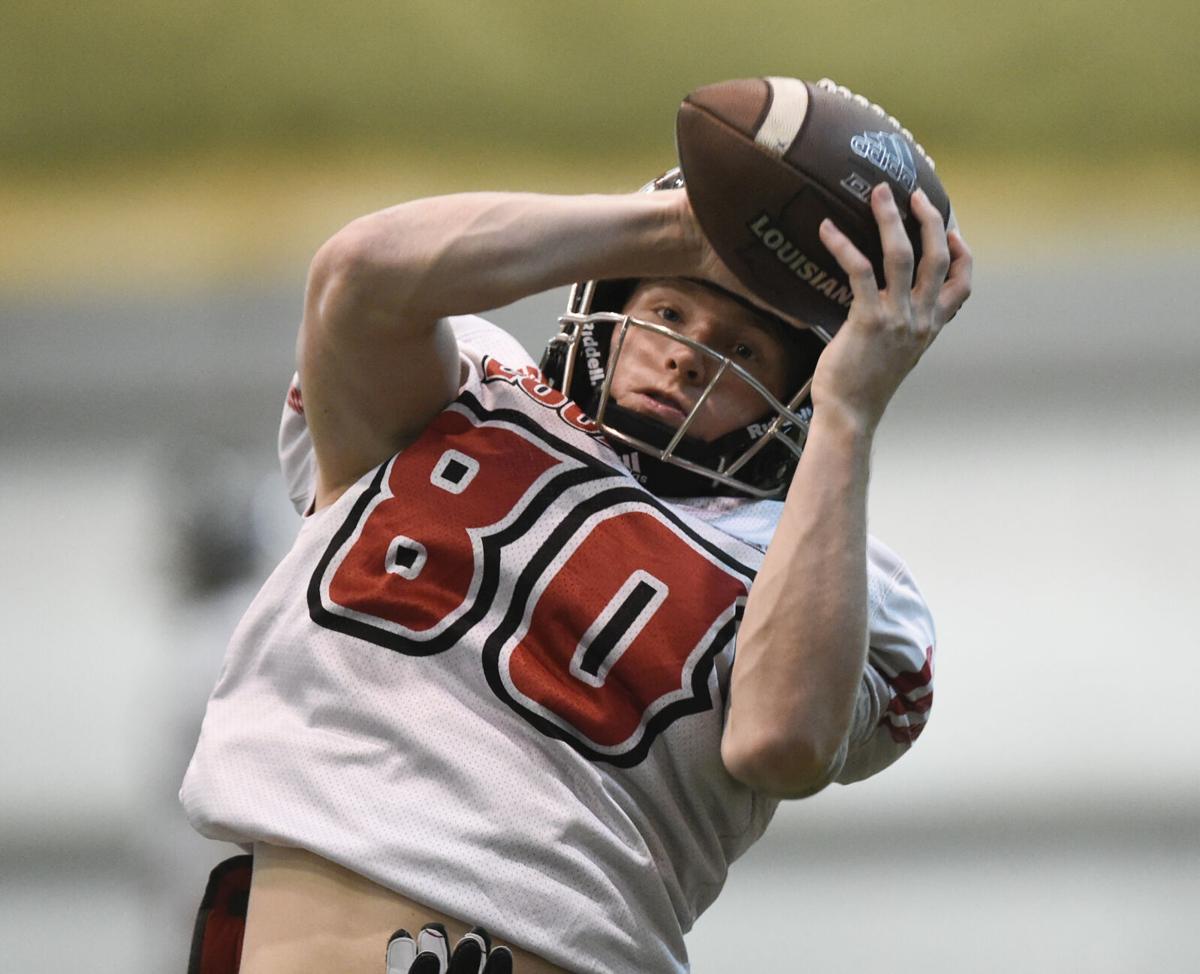 UL wide receiver Devon Pauley, shown here pulling down a pass in practice, has turned in two highlight-film receptions so far this season for the Cajuns. 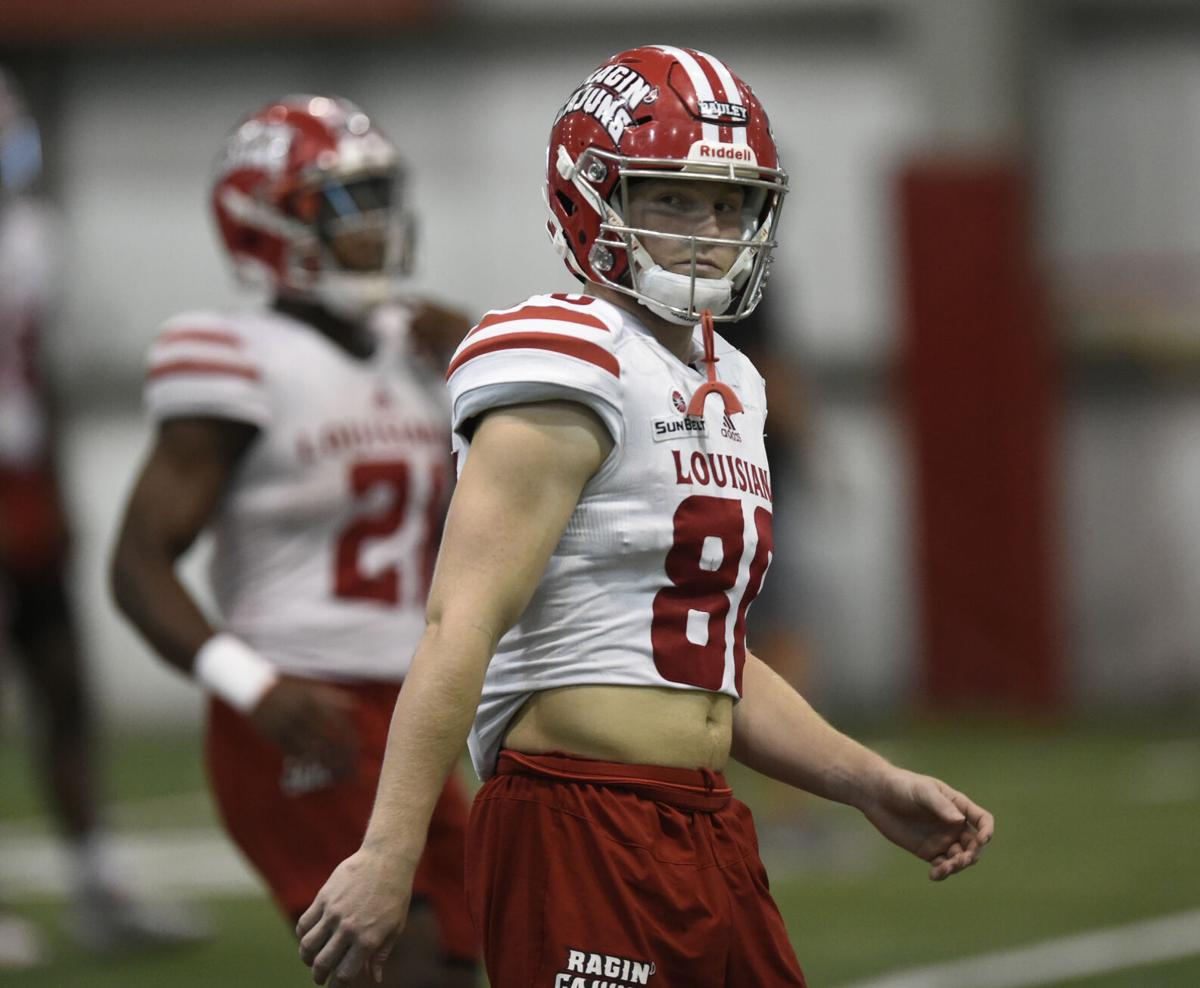 UL wide receiver Devon Pauley has made the most of his career thus far as a walk-on, getting significant playing time for the No. 19-ranked Ragin' Cajuns.

UL wide receiver Devon Pauley, shown here pulling down a pass in practice, has turned in two highlight-film receptions so far this season for the Cajuns.

UL wide receiver Devon Pauley has made the most of his career thus far as a walk-on, getting significant playing time for the No. 19-ranked Ragin' Cajuns.

No one knows how many receptions UL sophomore wide receiver Devon Pauley is going to get before the end of the 2020 season.

But when the highlight film of this Ragin’ Cajuns campaign is made, the former Barbe High standout will certainly be responsible for one of plays. Maybe even the very first one selected.

Pauley understands the importance of his performance and has been working hard to be able to step up for his team. But his motivation runs deeper. He plays for the sister he lost when she was 15 and he was only 12 and for his hometown of Lake Charles, recently devastated by Hurricane Laura.

The highlight-reel catch came in a drive late in the second quarter with his No. 19-ranked Ragin’ Cajuns down 14-0. Cornerback Mekhi Garner’s interception halted Georgia State’s momentum, but suddenly UL’s offense was facing a fourth-and-10 on the Panthers’ 42.

Under intense pressure, quarterback Levi Lewis began scrambling. He found Pauley down the field before getting hit and the receiver made a circus grab in heavy traffic for a 19-yard gain.

Teammate Chris Smith caught an 18-yard touchdown pass on the next play and the Cajuns were now back in it on their way to a 34-31 overtime win.

Like team overall, UL punter Rhys Byrns not satisfied with his performance despite recognition

The overall theme for the 2020 season thus far for the No. 19-ranked UL Ragin’ Cajuns applies also to the special teams.

“Ran a dig route — the safety played it good on me,” Pauley said. “I was covered up and I saw Levi scramble to his left, so I scrambled back and he scrambled back to the right. I cut back and he turned and made the throw. I knew I had to go get it — fourth-and-10.”

In the moment, Pauley's thoughts went back to his formative years in Lake Charles.

“My high school coach used to always say, ‘Your number is going to eventually get called, so when it does, be ready to make a play,’ so I knew I had to make a big-time play,” Pauley said. “I knew it was going to be contested. I had to go up and be strong and make a catch.

In two games so far, Pauley has two receptions for 35 yards. Both came at the end of the first half, both were tightly contested by defenders and both ignited critical scoring drives.

“We actually ran it twice,” Pauley said of the other grab at Iowa State. “We ran it the first time and coach Nape called it again. ... Levi made a great throw. I knew it was going to be a contested catch, so I tried to keep my hands strong through out and get my feet down.”

He made his wide receivers coach Tim Leger proud with both efforts.

That relationship hearkens back to Pauley growing up in Lake Charles. Leger played and coached at McNeese State. His son, Gunner, played wide receiver at Barbe.

“I went to a couple of McNeese camps (growing up),” Pauley said. “We get along well.”

Essentially, both of UL's wins are the same - not playing great just yet, but took care of bottom line

At first glance, UL’s 34-31 overtime win over Georgia State on Saturday was totally different than the season-opening win over Iowa State.

A week before that first game at Iowa State, the 5-foot-8, 174-pound receiver was in Lake Charles with Leger on the campus at McNeese State.

It was unlike any trip home he had ever taken.

About a week before the visit, Hurricane Laura ravaged Calcasieu Parish with devastating winds. So Pauley was among 56 members of UL’s team to unload a huge truck filled with food and cleaning supplies for those in need in his hometown.

“It’s heartbreaking to go back to your hometown and not even recognize it,” Pauley said. “It meant everything to me that coach Nape allowed us to do that and the other sports that came along with us, help out and provide for Lake Charles.”

Pauley said his mother Susannah’s home was so damaged that she’s moved to Crowley. His younger sister had to transfer to Notre Dame.

His father Len’s house survived better than most, but his car dealership was destroyed.

After this week and offseason, don't sweat the details UL fans — just take the win

ATLANTA — It was one of the most unique weeks in the history of UL’s football program.

“I don’t know if Barbe is going to open again this year,” Pauley said in describing the damage to his old high school.

His grandfather, Jimmy Shaver, was the Buccaneers’ head football coach for three decades. His home suffered tree damage as well in the storm.

“I was blessed to grow up around football,” Pauley said. “I used to get my mom to bring me to Barbe to watch practice from the time I was in kindergarten until I started playing in middle school. I just learned the game very well. I can pick up and learn playbooks fast.”

So those instincts of where to run when Lewis was scrambling on fourth-and-10 this past Saturday and that toughness required to catch the ball in traffic didn’t come by accident.

The value of preparation was learned honestly.

“It’s just, offseason,” Pauley said. “We had the voluntary workouts and we’d stay as long as we could before we had to get out. We’d just work on routes and timing. We’d just talk through situations. We always talk about if Levi gets to scrambling, just scramble and stay in his vision. If he sees you open, he’ll make a play.”

While many around the country were too distracted by COVID-19 and several other big issues over the summer, Pauley remained focused on football.

That’s also something he learned growing up in Lake Charles.

When he was 12 years old, his 15-year-old older sister, Hannah, committed suicide as a result of bullying. That’s something he’ll never forget.

“I go out every day in practice, I go practice hard for her,” Pauley said. “Every game I play is for her, every snap is for her .”

To this day, he wears "HP" under his eyes every game. Those initials honoring his sister are a tattoo on his inner bicep as well.

So whether he’s in Ames, Iowa, or Atlanta, pieces of Lake Charles are always with Pauley.

Sure, he played a role in the Cajuns earning the program’s first AP Top 25 ranking since 1943. But Pauley’s celebration is tempered by the reality of what’s going on in his hometown.

How the No. 19 Ragin' Cajuns delivered a dramatic comeback road win in overtime

ATLANTA — With all the effort, emotion and endurance it requires to carry an offense on your back in an overtime period after four quarters of…

“It’s hard,” he said. “It’s stressful. I don’t want to … If I need some money or something, it’s hard for me. I don’t want to ask my mom, because I know she’s going through all that. My dad ... it  basically took his job. It’s stressful, but I try to focus on the things I can focus on and control the things I can control  — stay focused on the game because I know my teammates need me.”

Football being the oasis in a turbulent world isn’t a new concept for Pauley. Lake Charles taught him to utilize that mechanism.

“It’s definitely been hard,” he revealed. “I just try to control what I can control. Football is kind of an outlet for me. It always has been through the tough times. I lost my sister when I was younger and football has just always been an outlet for me.

“I think Devon has been one of the more inspiring players on our team,” UL coach Billy Napier said. “Devon isn’t the biggest guy, but he’s extremely intense, focused … very deliberate and intentional with everything he does. He works extremely hard in the weight room and conditioning program and he’s been a very effective player for us.

“Certainly he’s tough and fearless. He has character. He comes from a great family of people. He’s a guy that just shows up and does his job. He might not be what you’d expect, but the guy can do it. I admire him and certainly he’s been a great example to a lot of our players about what can be done if you go about it the right way.”

Perhaps giving some he knows back home in Lake Charles a reason to smile again.

ATLANTA — It’s going to be the year of unexpected unavailable players. On Saturday, that was Cajuns senior outside linebacker Joe Dillon. He d…

In many ways, UL sophomore safety Kam Pedescleaux had already distinguished himself from the crowd — behind the scenes anyway.