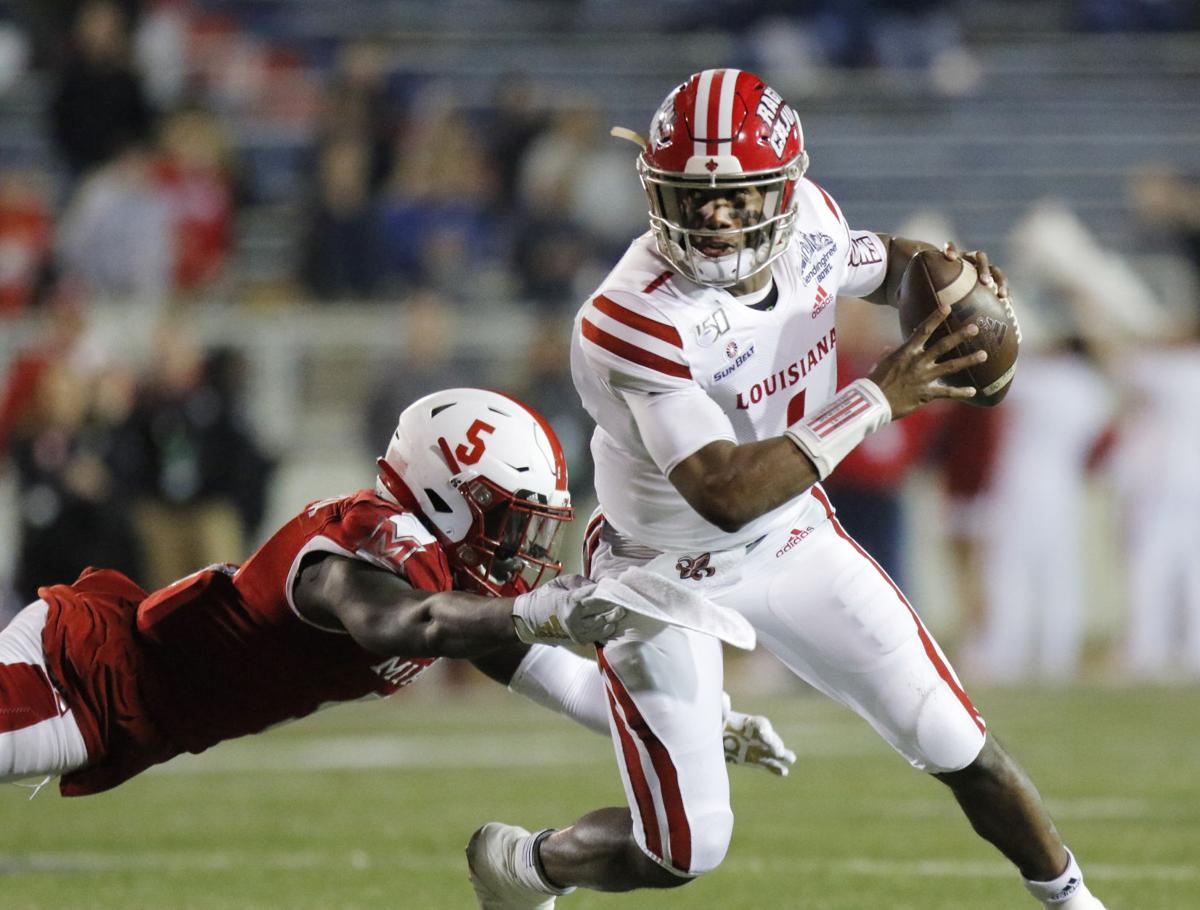 UL quarterback Levi Lewis added 62 rushing yards to his 246 yards passing during the Cajuns' 27-17 LendingTree Bowl win over the Miami Redhawks on Monday at Ladd-Peebles Stadium in Mobile, Ala. 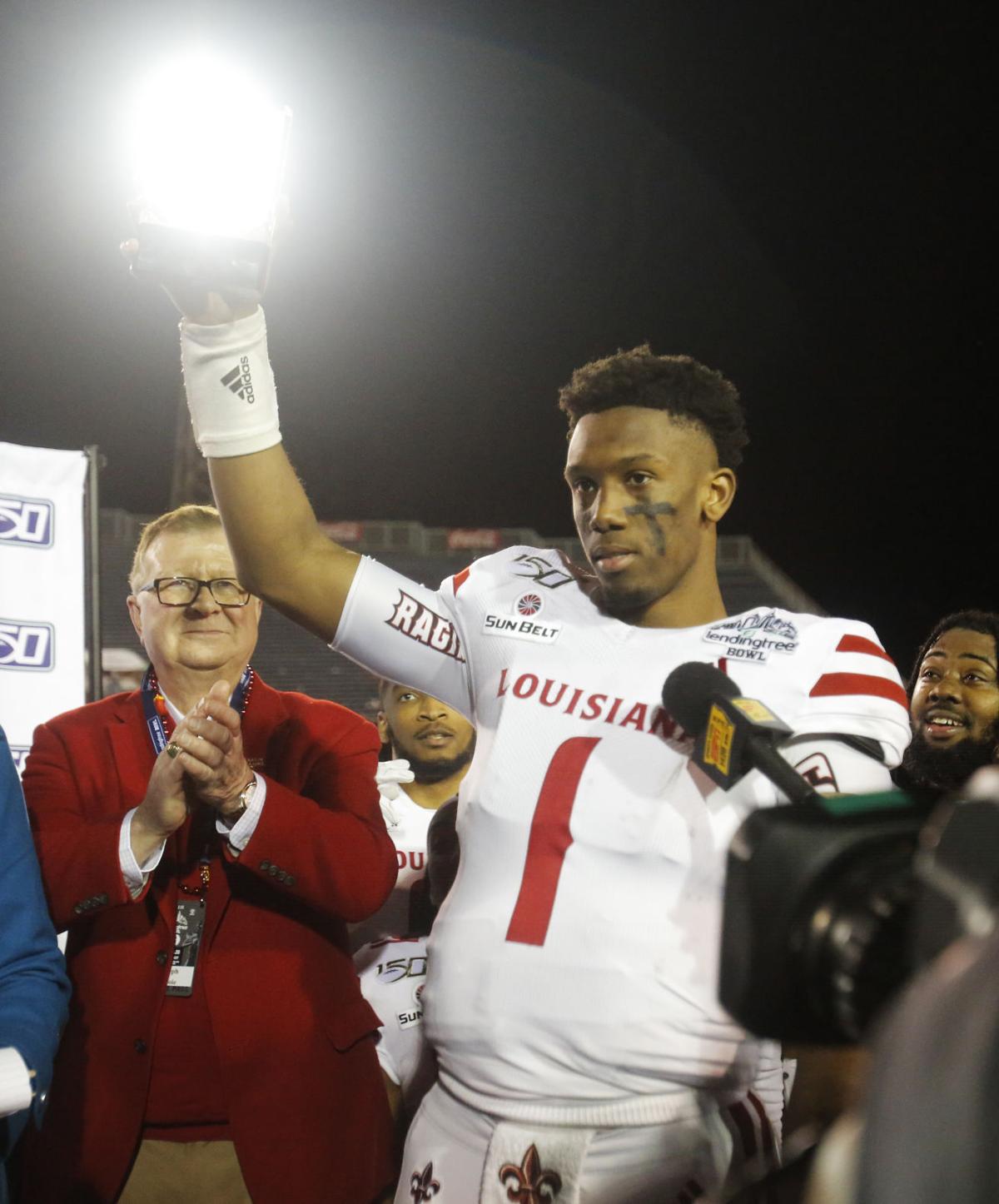 UL quarterback Levi Lewis holds up his award as the Most Valuable Player of the Cajuns' 27-17 LendingTree Bowl win over Miami on Monday at Ladd-Peebles Stadium in Mobile, Ala.

UL quarterback Levi Lewis added 62 rushing yards to his 246 yards passing during the Cajuns' 27-17 LendingTree Bowl win over the Miami Redhawks on Monday at Ladd-Peebles Stadium in Mobile, Ala.

UL quarterback Levi Lewis holds up his award as the Most Valuable Player of the Cajuns' 27-17 LendingTree Bowl win over Miami on Monday at Ladd-Peebles Stadium in Mobile, Ala.

The first pass of the 2019 season for junior quarterback Levi Lewis was an interception in the loss to Mississippi State in the Mercedes-Benz Superdome.

It was his first start as the clear-cut No. 1 quarterback of the UL Ragin’ Cajuns. As coaches typically describe it, the Scotlandville native was a work in progress.

On Monday night in Mobile, a much more mature, polished version of Levi Lewis put on a clinic how a versatile quarterback plays the position in leading UL to a 27-17 win over the determined Miami Redhawks.

“I thought Levi’s ability to make plays with his feet was the difference in the game,” UL coach Billy Napier said. “There were times where there were critical plays where he made some plays, like the naked touchdown. That wasn’t how we drew that play up, but he made the cornerback miss on the blitz and then he made the great throw on the back line of the end zone. Those are the type of plays that you might not expect and don’t draw up on the chalk board. He does a really good job of making decisions that help win the game.”

With UL’s vaunted rushing attack slowed down for much of the first three quarters, Lewis carried the Cajuns’ offense when it needed carrying.

“He does a good job of taking calculated risks,” Napier said. “He takes care of the ball. We ask him to do a lot. He’s a really good student of the game. He always tries to put the team in a position to win and really isn’t concerned with the numbers at the end of the day. I thought he was really good tonight.”

Lewis finished the game 19-of-26 passing for 246 yards with two touchdowns and no interceptions. He also ran eight times for 62 yards to earn the game’s Most Valuable Player award.

MOBILE, Ala. — The bulk of the pregame talk was about how the monthlong break would affect the execution in Monday’s LendingTree Bowl matchup …

“I would start by giving a big shout out to our offensive line and how well they blocked today,” said Lewis, who became the school’s first 3,000-yard passer and set the record with 26 TD passes. “It all starts with them up front and giving my time to get the ball down the field. When they do that like they did tonight our wide receivers are able to make plays and get open down the field.”

No one was more impressed with how Lewis performed than Miami coach Chuck Martin.

“There were disappointing plays that when we’ll watch it again we’ll say that quarterback was pretty good,” Martin said. “We should’ve got him on the ground but part of the reason we didn’t get him on the ground is because he’s a damn good football player.

“To me he was the difference. There were a couple of times when the deserved to run or throw the ball well and they and you give credit to them, but there were a couple of plays that he made that changed the game and changed drives where we had him defensed. He can wait so long because he knows how quick he is. Twice we blitzed him and he beat us, and I have good players coming off the edge.”

For much of the season. Lewis was a reluctant scrambler. In this curtain-call game, Lewis was more aggressive with his legs, and it paid off in a big way.

“He’s a very good player who is shifty and (a) smart quarterback,” Miami senior defensive lineman Doug Costin said. “We knew coming into the game that that was one of his skills that he relies on. There was one play where I came clean and thought I was going to be able to sack him, but he was able to roll out and get away. He’s the type of player that if you don’t with your eyes, he’s going to make you pay for it.”

It wasn’t just Lewis that had obviously developed over the course of the season. Six different receivers had multiple catches in the win.

“It was part of the game plan and the plays that we called tonight (Monday),” said Lewis, who finished the season 243-of-378 passing for 3,050 yards with 26 TDs and four interceptions. “Coach Nape does a great job of setting us up to succeed and all I had to do was make the correct reads. It doesn’t matter who’s out there for us. Any of those guys that get an opportunity they make plays.”

The extended month-long break is over.