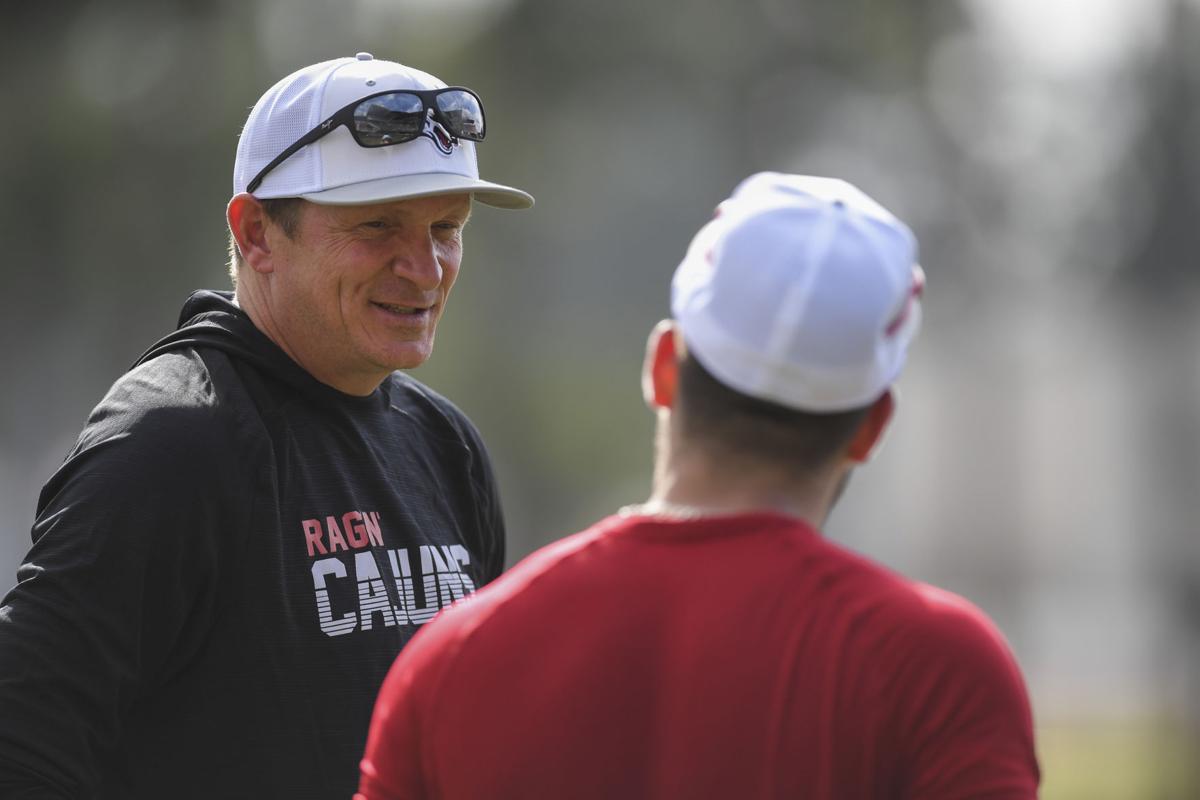 UL baseball assistant coach B.J. Ryan talks to a player during a preseason practice session. A former pitcher for Tony Robichaux joined the staff in the wake of his former coach's untimely death last July. 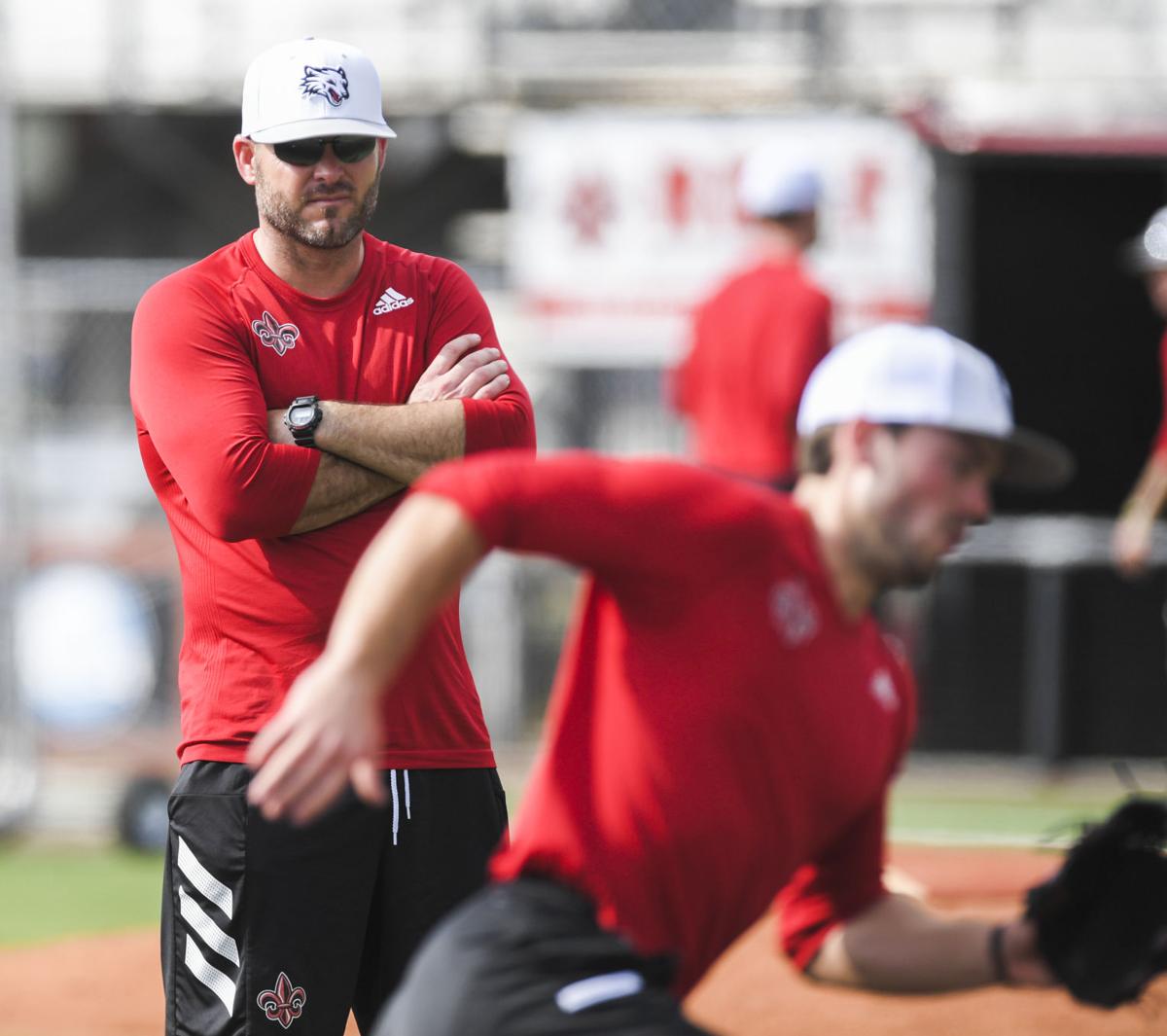 UL baseball assistant coach Jeremy Talbot observes a preseason practice drill. Talbot is part of the contingent of coaches who remained with the Ragin' Cajuns after the death of Tony Robichaux.

UL baseball assistant coach B.J. Ryan talks to a player during a preseason practice session. A former pitcher for Tony Robichaux joined the staff in the wake of his former coach's untimely death last July.

UL baseball assistant coach Jeremy Talbot observes a preseason practice drill. Talbot is part of the contingent of coaches who remained with the Ragin' Cajuns after the death of Tony Robichaux.

When Matt Deggs’ heart told him it was time for him to step up for UL’s stunned program after the sudden death of longtime head coach Tony Robichaux in July, he elected to keep the coaching staff as it was with a few additions.

When the the season begins at 6 p.m. Friday against Southeastern at Russo Park, a major theme throughout the campaign will be around the coaches — not only honoring the one no longer here, but also those who remained and why.

“Our coaching staff is very well-rounded and balanced,” Deggs said. “This staff complements each other very well.

“I’m a big believer the tightness of a staff will always trickle down into the team and I think our players sense that.”

The most discussed newcomer figures to be volunteer coach B.J. Ryan, who played outfield and pitched for the Cajuns as a player before a two-time All-Star career as a closer in the Major Leagues.

“He’s a voice of reason,” Deggs said. “He’s a guy you can lean on. He’s a guy who’s been there and done that. The best part about BJ is that he played here and he’s got that connection to coach Robe.”

Like Deggs, Ryan answered Robichaux's call to "stand up" with the program in transition after the coach's death.

“There’s not a single player on the team — hitter or pitcher — that doesn’t like him and respect him," UL senior pitcher Caleb Armstrong said of Ryan. "He obviously knows the game."

“He’s a veteran guy who’s been to the highest levels,” Deggs said. “He’s been around the best players in the world. He has 48 at-bats against Hall of Famers. Who has that? By the way, they got three hits combined in those 48 at-bats.”

Much of Ryan’s philosophy comes from Robichaux, but there are differences.

“Very similar,” Armstrong said. “Robe was big on competing and that’s really all B.J.’s mindset is and that’s his philosophy. Robe’s system was a lot more intricate. A lot of that went off the hitter’s body language on the previous pitch.

“We don’t really get into a lot of that anymore. It’s more just getting up there and executing pitches and just competing.”

Armstrong suspects it might be a little easier for pitchers to talk their way into another hitter than it was with Robichaux.

Naturally, the longtime relationships with associate head coach and director of player and program development Anthony Babineaux and assistant coach Jeremy Talbot made those decisions easy ones.

“Bab and I came up together as young pups in the coaching ranks,” Deggs said. “We’ve been together for 25 years. Not only does he coach, but he’s one of my closest friends.”

“Then Jeremy Talbot, who is incredibly, incredibly smart,” Deggs said. “His baseball IQ acumen is through the roof. Coach Talbot and I won championships together at Texas A&M.”

Hitting coach Jake Wells was new to Deggs with last year being his first with Robichaux.

“I wanted Jake because coach Robe absolutely loved Jake and it took me about a day and a half to figure out why,” Deggs said. “He’s intense, brings a lot of energy.

“He understands the parameters of our offense and learns a little bit more each day. He already knows the players.”

Deggs called academic and camp coordinator Chris Domingue, who also coaches in bullpen, "The Legend from Scott, Louisiana," as well as "Just a man of the people."

“I love those kids,” Deggs said. “I love giving young guys a chance to coach. The same thing happened for me. It’s a chance to open a door, let them finish a degree and at the same time, see if this is something they want to pursue. It’s a tough business.”

As an ex-pitcher, Cox throws batting practice for the Cajuns.

“He still get guys out,” Deggs laughed. “I wish we had him.”

Toughness is a major part of Deggs’ pack coaching philosophy.

Lafleur illustrated that in a preseason practice session in which his jaw was broken in two places when hit by a line drive.

“He never saw it coming,” Deggs said. “He didn’t go down. He grabbed his jaw, starting spitting blood. I get out to him, look at him — a lot of blood — he’s got all of his teeth intact. Walk over the dugout, he rinses it out.

“He’s still bleeding. And he says, ‘I’m good to go, coach,’ and walked back out there and started feeding the machine.”

In Deggs’ mind, “that’s kind of what this place is to me.”

Transition into 2020 UL baseball season going even smoother than expected

For some around UL’s baseball program, truly getting over everything that transpired in 2019 may never take place.