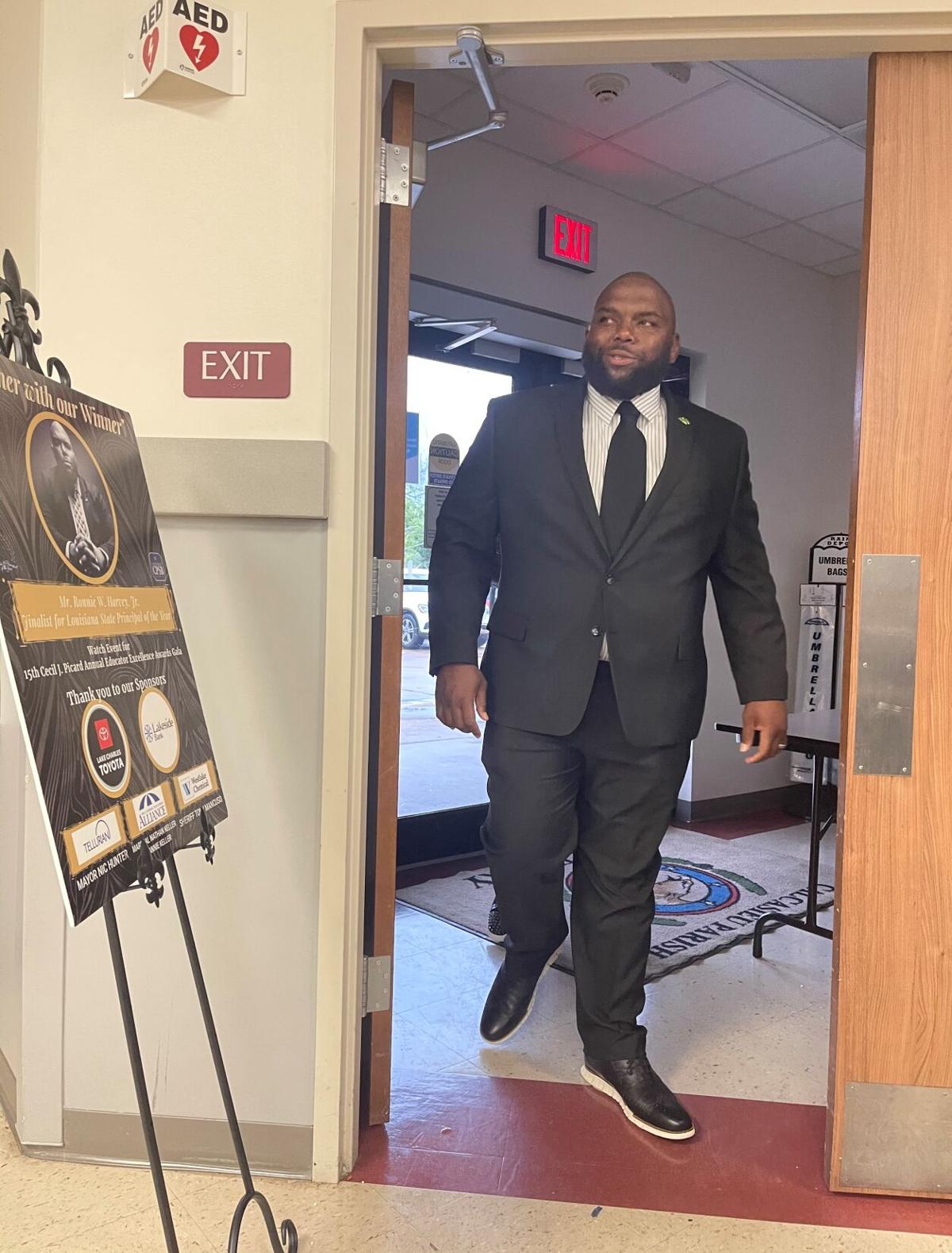 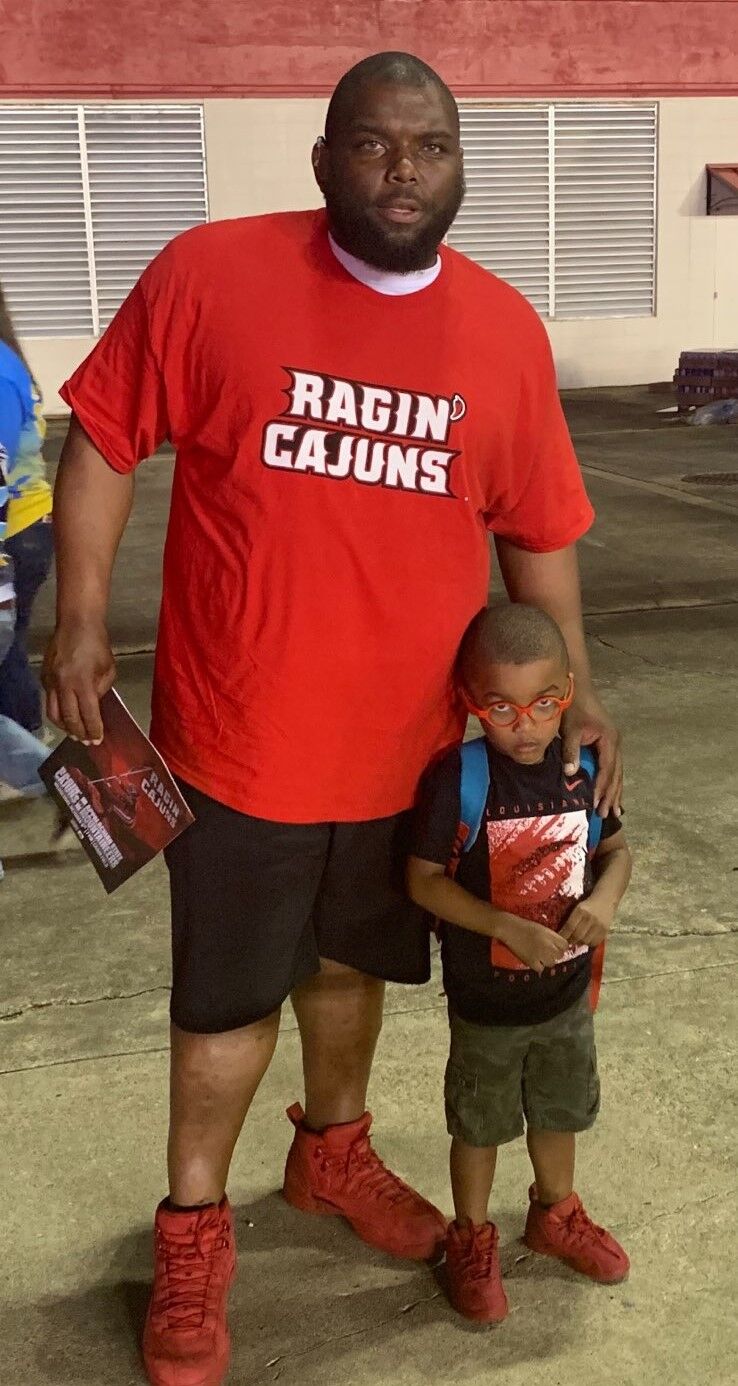 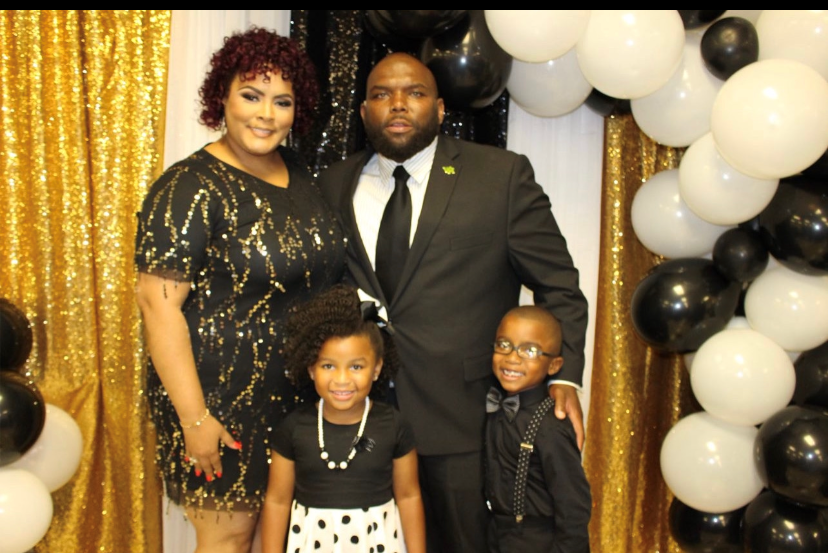 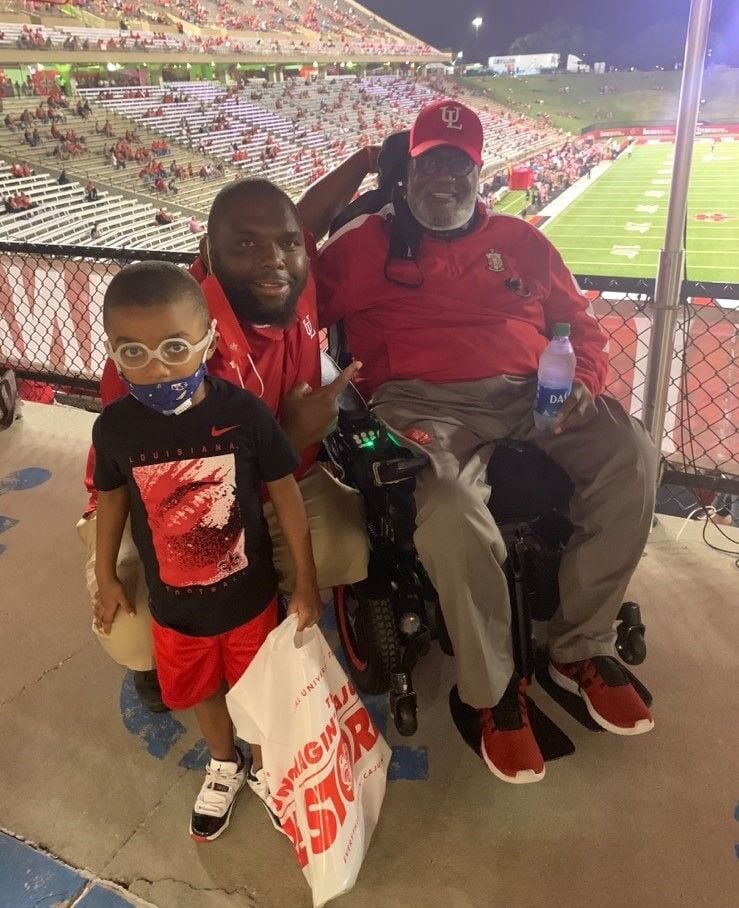 Former UL offensive lineman Ronnie Harvey and his son Ronnie III takes a photo with his former athletic academic advisor Danny Cottenham at one on his trips back to Cajun Field. 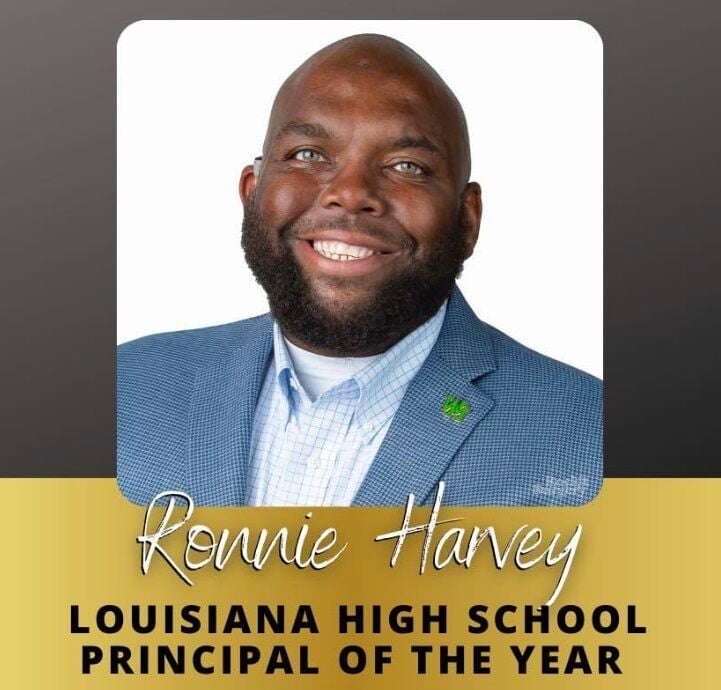 Ronnie Harvey was recently named Louisiana's principal of the year.

From the time he graduated from the University of Louisiana at Lafayette in the spring of 2005, former Ragin’ Cajuns three-year starting center Ronnie Harvey had thoughts of returning to his old high school of Washington-Marion in Lake Charles.

If you would have asked him back then, his goal would be serving as the head football coach for the Chargin’ Indians, and he pursued that goal as an offensive line coach at Washington-Marion for a decade.

Along the way, he passed on several options to be a head football coach elsewhere. Those places might have been good opportunities, but they weren’t where he played high school ball.

“He kept telling me he saw me as a principal one day,” Harvey said. “I really wanted to be the head football coach at Washington-Marion, because I played for a great man in coach Wayne Reese there and he made a huge impression on my life.”

As usual, UL quarterback Levi Lewis is ahead of the game.

In the fall of 2014, though, Harvey finally listened to Pete and took the test … and he passed it.

Seven years later, the 2000 Washington-Marion graduate was honored last week as the Louisiana High School Principal of the Year at his alma mater.

This past weekend, the reality of the prestigious honor hit Harvey. He was in a sporting goods store getting fitted for some golf clubs when the employee helping him recognized him.

“The lady working there told me congratulations,” Harvey laughed. “I was just surprised she knew who I was.

"They’ve put up billboards around the city congratulating me. It’s been great.”

Like most veterans of a team sport like football, a huge part of Harvey’s message deflects the praise for his achievement.

“I don’t take credit for this award,” Harvey said. “I tell everybody that this is the community’s award. I’ve been blessed. I’m a product of this community. I always knew I wanted to come back to Washington-Marion in some capacity.”

After passing the test, Harvey served as the assistant principal at the Calcasieu Parish alternative school for 18 months and then two years as the principal there, where he supervised four sites across the parish.

Harvey quickly discovered this new position Pete pushed him into wasn’t that different from being a coach.

“At first, it was a shock some ways, but really I loved it,” he said. “It was really just like being a coach. Kids and teachers still call me ‘Coach Harvey’. To me, being an administrator is coaching.

“You put together a game plan and if it doesn’t work, you make adjustments. It’s just like a coach running an offense or defense. My assistant principals are like my coordinators.”

Another secret to Harvey’s rapid rise in his new profession was starting a drivers education academy a decade ago.

“You have to be able to relate to the kids.”

Thinking back to his playing days at UL, Harvey said strength coach Chris Gannon and assistant head coach and recruiting coordinator Troy Wingerter made an impression on him, as well.

“I’m not an old guy, but I’m not young any more either,” the 39-year-old Harvey explained. “It kind of reminds me of my playing days at UL. We had coach Gannon as our strength coach and coach Wingerter. They weren’t our age, but they still had the ability to relate to college kids. That makes a big difference.”

Wingerter isn’t shocked Harvey’s skill set led to his success as a principal.

On May 23, 2018 — exactly 18 years to the day he graduated there — Harvey was named the principal at Washington-Marion High School.

Harvey continues to go out of his way to communicate with his students.

“I’ve always been very hands-on,” he said. “I’m always walking the halls or in a classroom. I like being in the trenches, not by myself sitting in an office.

“The work that I need to do in my office, I do after school is over.”

A huge reason for Harvey’s recognition was Washington-Marion improvement in performance scores. It was a ‘D’ school when he took over in 2018. In a year and a half, his old school was elevated to a ‘B’ grade.

After two hurricanes in six weeks, southwest Louisiana’s faithful pray where they can

The values Harvey learned during his football playing and coaching career never proved more valuable than they did last summer when he first arrived on Washington-Marion’s campus to view the destruction caused by Hurricane Laura.

“The first time I drove out to the school and saw it, it was a shock,” he said. “It made you numb.”

The facilities were so damaged and his student body so dispersed, Washington-Marion wasn't able to play football in the fall.

Again, Harvey said he hearkened back to tough times on the gridiron.

"It brought me back to my experience at UL," he said. "I was always undersized to be an Division I offensive lineman being under 6 feet. I had to fight every day.

"I used that experience of playing against teams like LSU and Texas A&M. … I definitely think back to my years of playing with the Cajuns and that helped me tremendously. It’s all about resilience."

He quickly appraised the destruction and got to work.

“I knew I had to move forward,” Harvey said. “One of the things you learn in sports is not to flinch. If you’re going to be a leader, when everything’s going wrong, you can’t let all the guys around you see you flinch. You have to stay strong.

“We were back in school by October. You can’t let it defeat you.”

A self-proclaimed trash-talker on the playing field, Harvey proved in those worst of times, he could walk the walk as well.

“If you go back and look at everything he’s done and all of his posts on social media accounts, you can see that he’s just an amazing human being.”

And one who is over-the-top loyal to his schools — Washington-Marion and UL.

“Anyone who knows me will tell you that my apparel is either a Washington-Marion shirt or a UL shirt,” Harvey said. “I’m a Ragin’ Cajun through and through. My office is full of UL stuff.”

Harvey said he tires to make at least four or five UL games a year despite his busy schedule. He’s a big tailgater. He’s already booked the Sept. 4 trip to meet the Texas Longhorns.

“UL is my university,” Harvey said. “It’s an amazing place. Trust me, I yell for UL more than anybody. I’m a product of that great university in Lafayette. The lessons I learned while I was there, it’s priceless.”

As the Louisiana High School Principal of the Year, Harvey was informed that he’ll be honored at halftime of an LSU football game in the fall, as well as represent the state in Washington, D.C., in a national competition.

Harvey said he made the committee laugh when he offered an abrupt objection.

“I told them that I’m not about to wear an LSU jersey at Tiger Stadium,” he laughed. “They better find me something in Vermilion and White. They thought that was funny, but it’s true.

“Believe me, I will be wearing a UL lapel pin on my shirt when I’m in D.C.”

When the Sun Belt Conference football programs meet for the 2021 media days Thursday in New Orleans, there figures to be plenty of smiles to g…