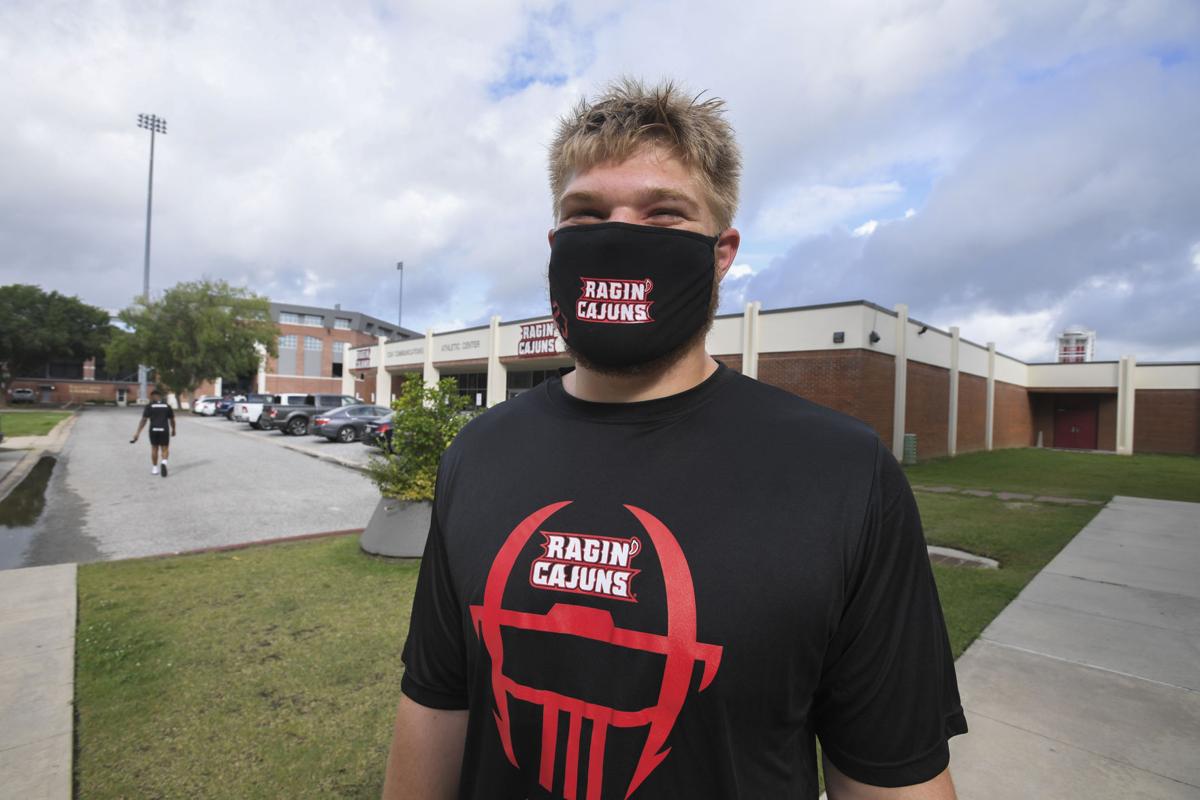 All UL football players will be required to wear masks when entering the complex and in crowded spaces during voluntary workouts. 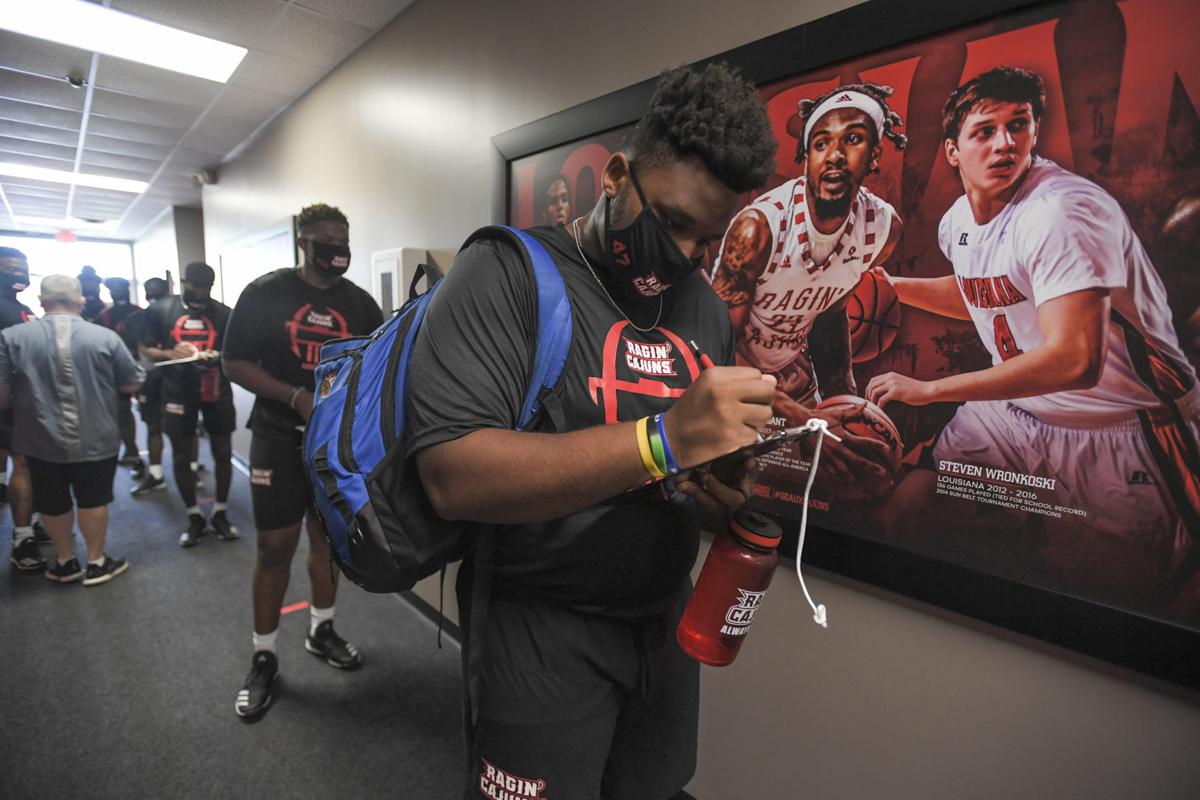 Each UL football player must fill out a questionnaire and get their temperature checked upon entering the facility each day.

All UL football players will be required to wear masks when entering the complex and in crowded spaces during voluntary workouts.

Each UL football player must fill out a questionnaire and get their temperature checked upon entering the facility each day.

The way UL football coach Billy Napier sees it, the next four weeks of voluntary workouts for his team should be a pretty clear-cut process.

For that matter, so is his plan for August training camp — hopefully ending up not so different than any other preseason camp.

Napier still has some work to do on that plan, but can begin making those decisions now that news is trickling in.

“I think you’re going to see a two-week period prior to training camp where there’s some specific guidelines,” Napier said Wednesday. “I know the (NCAA) football oversight committee met on that the last couple of days, and there’s some proposals out there to get reviewed by the conferences. We should expect a ruling on that pretty good and then we’ll put our plan together.”

Indeed, on Thursday, Yahoo.com reported the NCAA Football Oversight Committee recommended coaches can begin formally working with their teams July 13, meaning training camps would start Aug. 7. The NCAA Division I council is expected to approve it next week.

For now, it’s about getting his team used to the daily safety protocols ranging from wearing masks to social distancing in their assigned groups to daily evaluation forms to using all the reminders throughout the complex.

“The most important thing here is the safety of our student-athletes,” said Napier, who said his players have been educated and that each player's parents were contacted to reinforce the protocols prior to arrival. “I think our staff has done a great job. I know we’ve gotten great cooperation from a number of people — health experts within our community, certainly operating within state guidelines and local guidelines and specifically the university has a set of rules that we have to follow.

“We feel great. I do feel really good about our process, and I’m comfortable with the things that we do have in place relative to the procedure and protocols that we have.”

At this juncture, it’s about getting back in shape. Napier said the biggest concern from the three-month coronavirus shutdown is the players had so little access to weight rooms — even their high school facilities or local gyms were off-limits.

“The way we’re approaching this is that this is a physical climatization period,” Napier said. “We’re going to work for four weeks to try to get back in condition and really try to eliminate some of the injuries that maybe can happen if you’re not quite ready for activity. So very gradual, remedial type work to start to gradually try to get back to full speed.

The staff is hoping the workouts suggested during the shutdown hopefully has the players in position for the next four weeks.

“Our big message has been on the running part,” Napier said. “Let’s get back with our legs and our lungs in shape and we’ll get caught up from a weight room perspective in the summer.”

With that said, Napier said he’s accepted the reality that players won’t be as strong as usual when August arrives.

After three months of uncertainty surrounding Major League Baseball, some players around the country will finally get a few answers Wednesday …

“We can’t do that (testing) right now,” he said. “But if you did, I think that you’d see that we’ve lost lean mass. We’re not as strong as we would be. But I think that’s all relative.”

Along with that comes the team chemistry goals.

“Our approach for the next four weeks is going to be get back to the basics and really work on our team dynamic — accountability, leadership at the player level, taking ownership and really running with these voluntary activities,” Napier said.

In fact, Napier is counting on the unconventional offseason to help in that process.

“I think that might end up being an advantage for our team, because I do think we need to develop ownership and leadership at the player level,” he said. “Some of the challenges that we’ve been through, whether that’s been quarantine relative to COVID-19, whether that’s some of the dynamic things we’re dealing with relative to the social issues that we’re working through — all of these things have created adversity, and I really think it’s given us some opportunity to develop some leadership at the player level.”

As for the actual players returning to campus Tuesday, Napier commented on several of the new faces.

Snyder handled the kickoff duties for the Hoosiers last season.

“He has experience kicking in games,” Napier said. “He’s got a very talented leg and has really been a great person and a positive person. I know he’s excited to be here.”

Foote: Making sense of all the turnover in UL's men's basketball roster

It’s been quite an eventful offseason for the Ragin’ Cajuns men’s basketball program.

Robertson was with Napier and offensive coordinator Rob Sale for one year in Tempe three years ago, but didn’t play last season for “personal reasons,” so the NCAA granted him a sixth year of eligibility.

“We’re excited about him,” Napier said of Robertson. “It gives us a lot of position versatility and certainly helps with the loss of three really good players on the offensive line.”

Eke played wide receiver in the Houston area before electing to stick to being a triple jumper at Oklahoma. The plan is for him to triple jump and play football at UL.