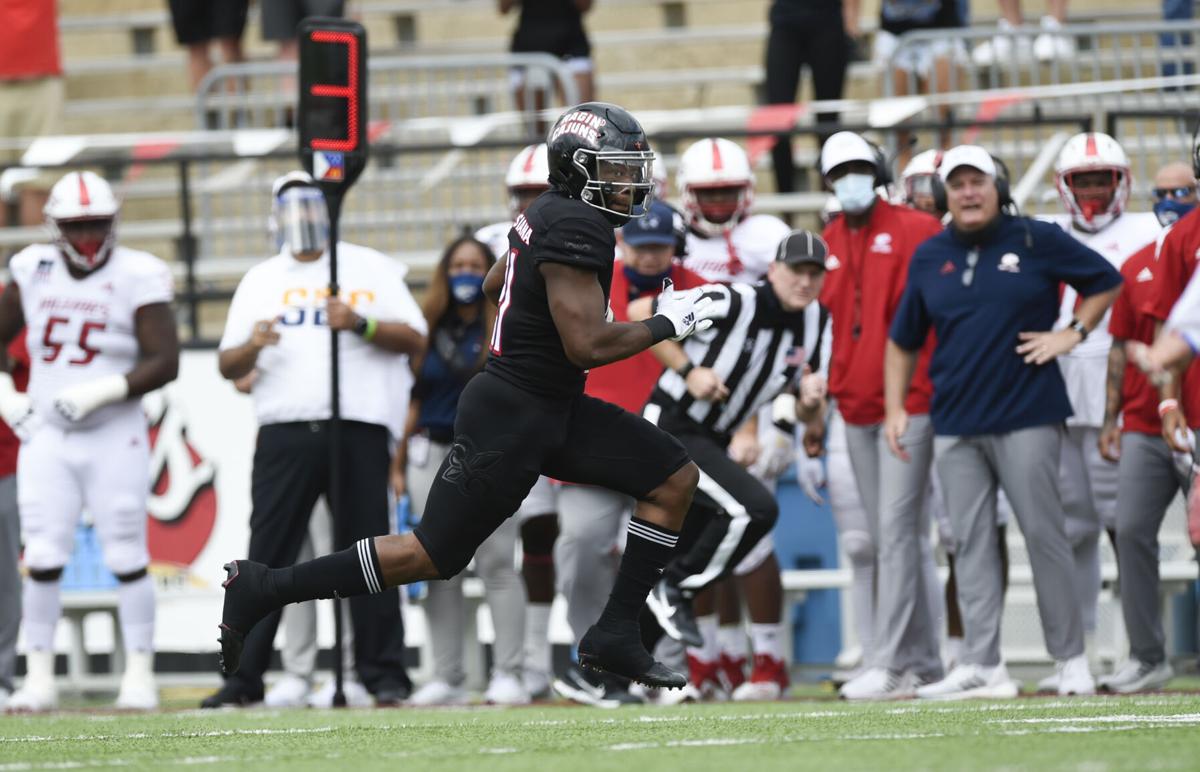 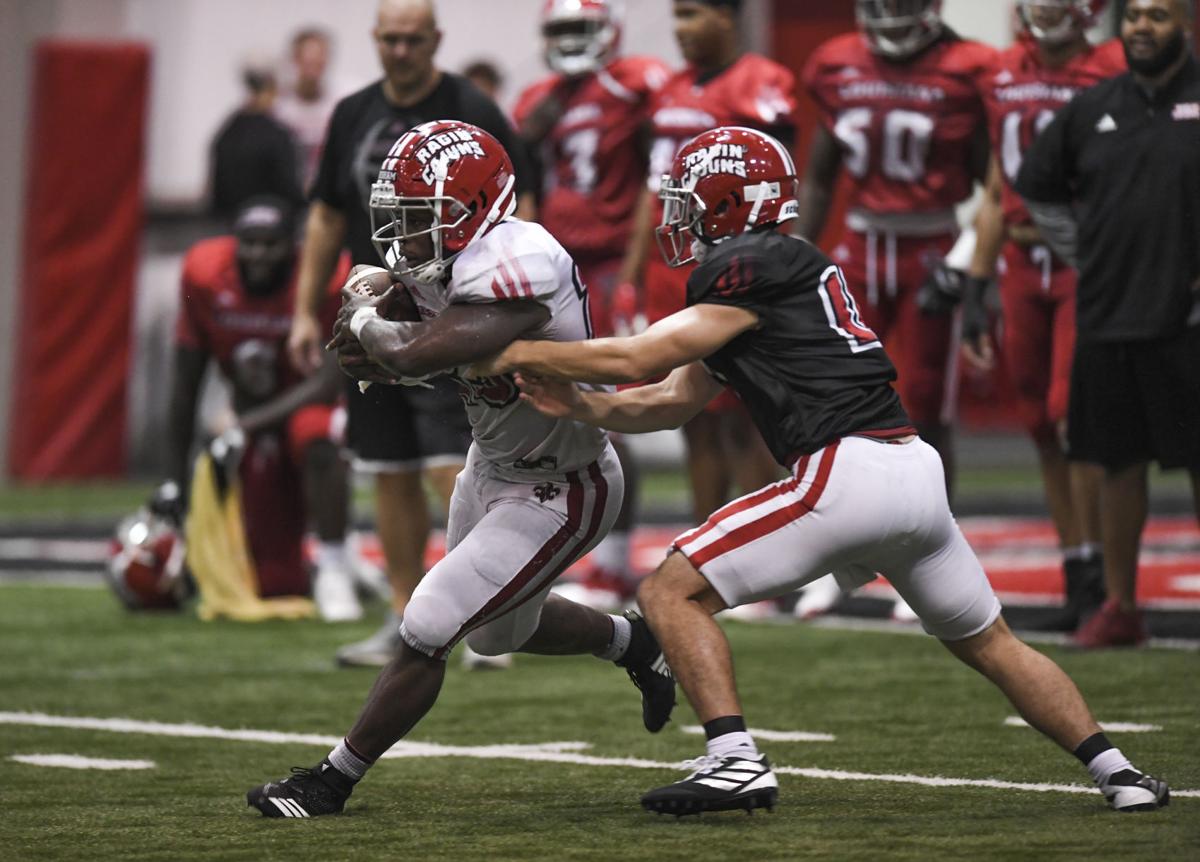 UL running back T.J Wisham, left, is hoping to be able to earn more carries this season.

UL running back T.J Wisham, left, is hoping to be able to earn more carries this season.

As logical an assumption as it may seem to the outside world, the running back room is not something the UL Ragin’ Cajuns spend any time worrying about.

“It’s going to be almost the same thing. Just because Elijah and Trey are gone, we’ve got some great backs in the backfield that can do the same thing,” center Shane Vallot said. “They’re going to get an opportunity this year. They didn’t get it as much, because we had two beasts in front of them. Now they’re going to have that opportunity.”

“We’ve got guys ready to go,” Lewis insisted. “I don’t feel worried at all. They’re not going to drop the ball. They’re going to pick up right where we left off. Everything’s going to run smooth.

“Our O-line is going to take care of those guys. The hole’s going to be big and all they’ve got to do is hit the hole and play fast.”

Junior running back TJ Wisham said it’s more of a mentality in the running back room than an actual comparison of skill sets that gives him confidence there won’t be a drop-off.

“We’re definitely losing some talent, but we always have talent in our room,” Wisham said. “One thing we say around the building here is, ‘It’s the whole room.’ That’s something we live up to in our running back room, regardless of you’re the first-string guy or the last guy on the depth chart. We hold you to a standard and we expect that standard to be upheld regardless of who comes and who leaves.”

From day one, running backs coach Jabbar Juluke hammers a mentality of “gameday reps every day in practice” into each running back in the room.

It's why Wisham wasn’t shocked at all when Mitchell posted such impressive workout numbers for NFL scouts at pro day.

“Like I said, we always preach it in here and to the media and to people, but it is true and it’s real when we say we try to bring a gameday rep mentality every day,” he said.

It’s also why Wisham quickly rebutted any inferences when asked why he thinks the production won’t dip.

“I know that’s going to be the case,” he said. “That’s the standard, so we’re not going to let it not be the case.”

Primarily a special teams standout with the Cajuns, Wisham is one of several options to fill the void left by Mitchell and Ragas.

This will be his best opportunity yet to get some carries, despite still recovering from a wrist injury that cost him most of the 2020 season. He’s expected to be fully healthy for August camp.

“I can’t tell you how motivated I’ve been,” he said. “We know it’s our time to step up and take the throne. It’s motivation every day, just trying to get better and get ready for the fall when September comes.

“I pride myself on being tough and when I look at myself in the running back room, I know I’m a powerful runner. I stick my foot in the ground and I get north and south. I’m not easy to tackle. I pride myself on those things and I’m ready to showcase those for the team.”

The most accomplished returning option is Chris Smith, who has shined as an All-American kick returner in addition to rushing for 350 yards and a touchdown on 62 carries last season.

Emani Bailey and Michael Orphey combined for 121 yards and one score on 14 carries.

“Look at running back room, look at Chris Smith,” Wisham said. “He’s proven himself to be a world-class kick returner. Now it’s time to prove himself as a world-class running back. We all have compete confidence in him. Chris has elite elusiveness, athleticism, cutting ability and his vision is off the charts.

“Look at Emani, he played a little running back last year. He’s young but he’s so shifty. That center of gravity is so low. At any second, he could burst and make a big play. Mike Orphey, Mike’s having an amazing spring. Mike’s running the ball tough. He’s showing his speed more and being more explosive.”

Also added to the mix this season is Incarnate Word transfer Jacob Kibodi.

“You could compare him to like an Eli (Mitchell),” Lewis said of Kibodi. “He can run it and he could come out of the backfield and catch the ball. He’s a great route runner. He’s real athletic.”

The Cajuns will also be joined by three incoming freshmen in Montrell Johnson from New Orleans, Dre’lyn Washington from Hemphill, Texas, and Carencro’s Kendrell Williams, as well as potentially Terrence Williams of Many.

Fortunately, running back is one of the few holes a coach could potentially trust a true freshman to help fill.

“Anywhere I’ve been, a young skilled player on offense probably more than any other position on your team can come in and impact your team,” Napier said.

“So then you throw the three high school rookies into the mix this summer and it’s going to be a very competitive situation there to determine who plays, who gets in the rotation, who gets the carries. But we’ve got a lot of confidence in Chris (Smith) and really the whole group.”

Needless to say, trying to make his way in the college football world has been quite a learning experience for former Rummel quarterback Chand…