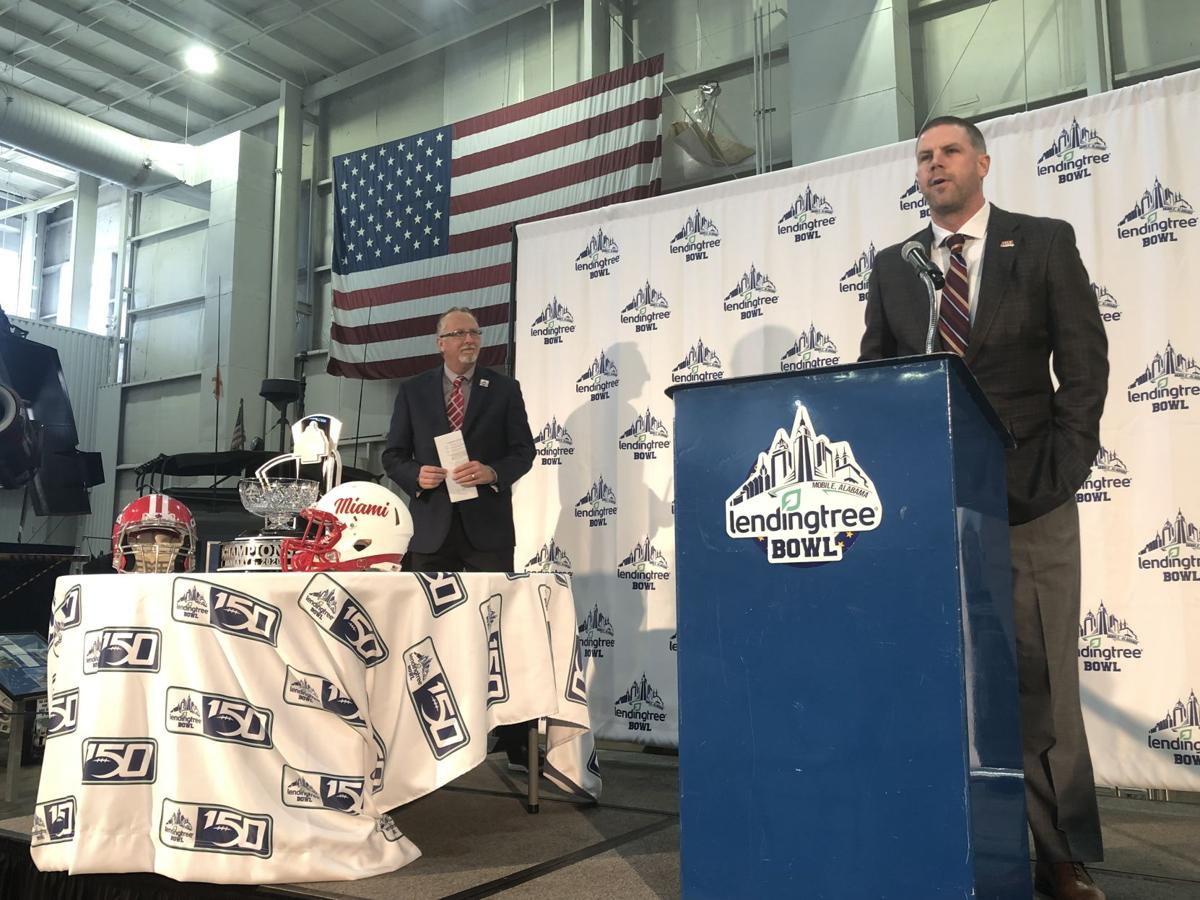 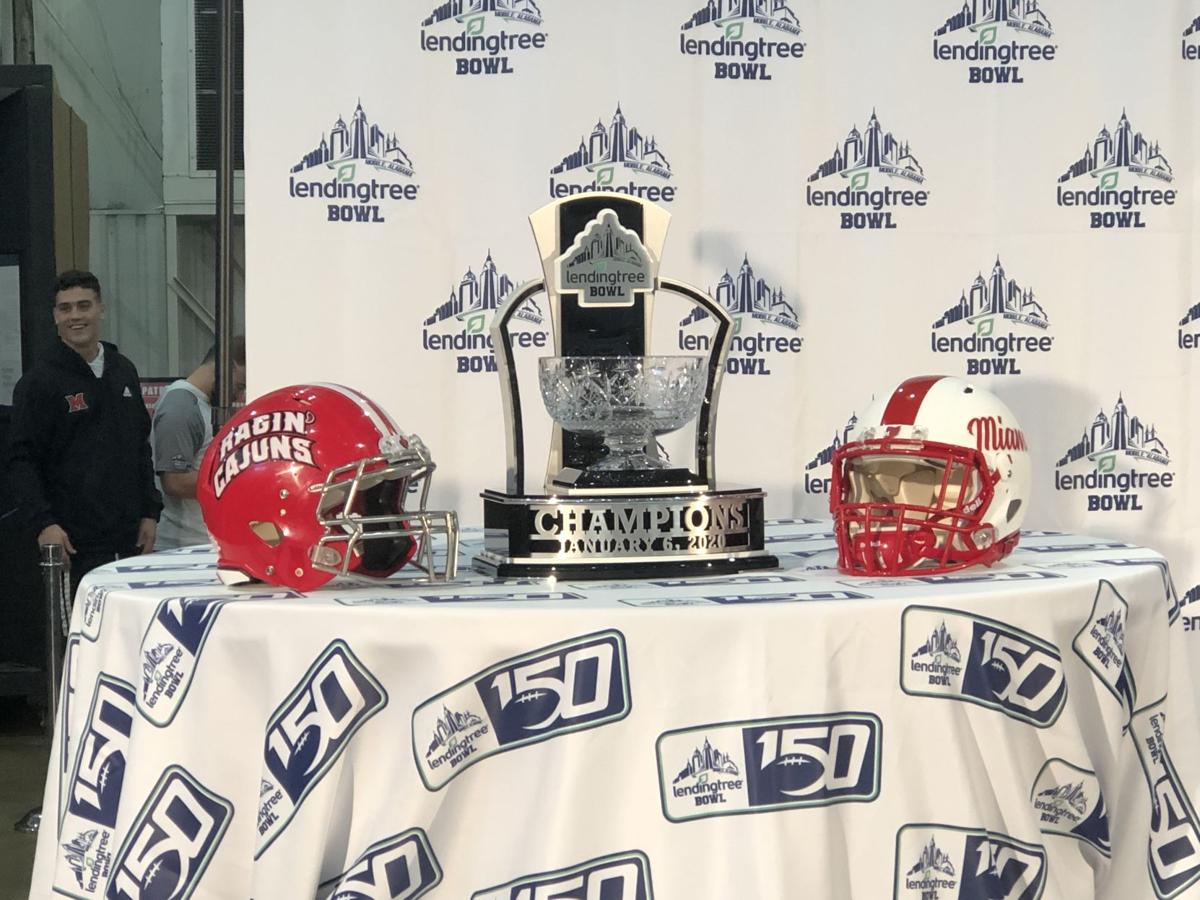 The UL Ragin' Cajuns and the Miami Redhawks will meet for the third time with this LendingTree Bowl trophy on the line at 6:30 p.m. Monday at Ladd Peebles Stadium in Mobile, Ala. 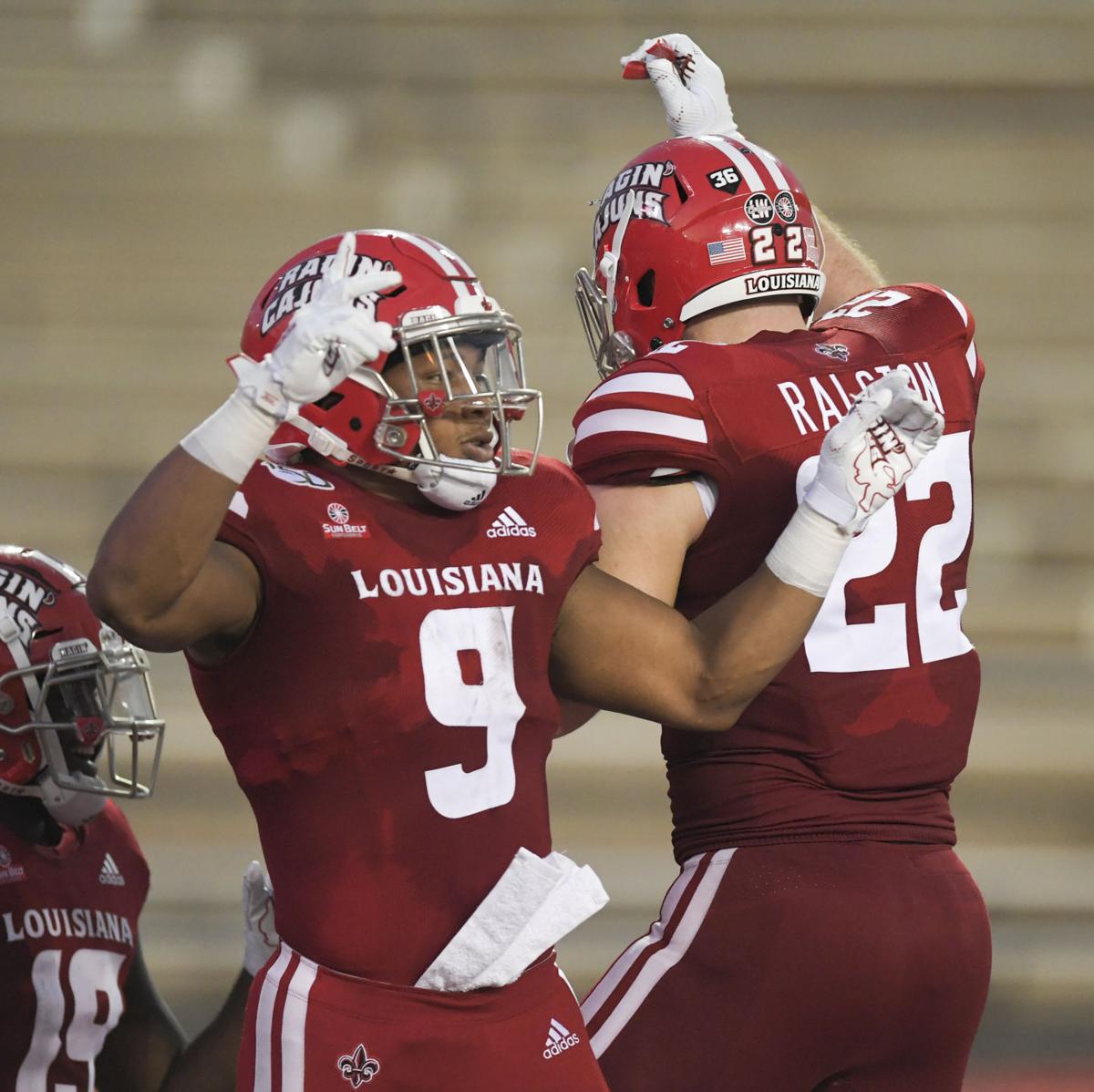 UL running back Trey Ragas (9) and tight end Nick Ralston (22) hope to end this historic 2019 season in style with an 11th victory.

The UL Ragin' Cajuns and the Miami Redhawks will meet for the third time with this LendingTree Bowl trophy on the line at 6:30 p.m. Monday at Ladd Peebles Stadium in Mobile, Ala.

UL running back Trey Ragas (9) and tight end Nick Ralston (22) hope to end this historic 2019 season in style with an 11th victory.

The extended month-long break is over.

Believe it or not, it’s time to play football again.

And if you listen to Miami of Ohio coach Chuck Martin, it’s going to be the biggest test of the season for his MAC champion Redhawks when they meet the UL Ragin’ Cajuns at 6:30 p.m. Monday on ESPN in the LendingTree Bowl at Ladd Peebles Stadium in Mobile, Alabama.

UL vs. Miami - By the Numbers

“Their coaching staff does an unbelievable job. We told our kids this is like the final exam. It should be the hardest challenge of the year.”

“I thought they had three great tailbacks, but I saw four and five in mop-up duty and I don’t want to see four and five either,” Martin said.

“Structurally, they are a pain,” Martin joked. “I thought we had a rule in these bowl games — no motions, no movements. I think it would be nice if they implemented that rule. They do so much formationally and shifting — pre-snap and post-snap movement. It’s really hard to fit their runs.”

One thing that could make stopping UL’s running game even tougher is a healthier Ragas.

“I’ve been very impressed with the way Trey (Ragas) has practiced,” said UL coach Billy Napier, who made it clear in Sunday’s news conference that he’s not a candidate for the Mississippi State job opening.

“I think he’s as close to being 100% and when Trey is healthy, he’s been a very productive player for us. I’m excited about getting him back close to 100%.”

On the flip side, Miami has done a good job down the stretch of running the ball, stopping the run and scoring touchdowns in the red zone.

In league play, the Redhawks converted on all 33 chances in the red zone with 27 touchdowns.

But the best thing the Redhawks do is excel in the kicking game.

Sam Sloman has made 25 field goals, Kyle Kramer is averaging 43.2 yards a punt and Maurice Thomas is sixth in the national in punt returns and 30th on kickoffs.

“I think they’ve got elite specialist play,” Napier said. “Their punter and kicker are some of the best ones I’ve seen the entire season. They’re great in coverage and I think they’ve done a terrific job of creating some explosive plays in the return game.

“That’ll be a very, very important part of the game Monday night.”

The other interesting aspect in the matchup that could prove in UL’s favor is the quarterback clash.

Miami (8-5) is playing a freshman in Brett Gabbert, who has thrown for 2,163 yards and 11 TDs with eight interceptions.

Senior graduate transfer tight end Nick Ralston’s appreciation for Lewis has grown in his only season at UL.

“I think Levi is a tremendous football player. I think he’s a tremendous person,” Ralston said. “I think he goes out there every day and really pushes it to the next level. I’ve been impressed with his growth over the season, even when I got here in June.

“Our offense in general has grown so much, especially that last game when we were able to spread the ball around with the passing game. It was real cool to see. I’m excited to watch him next year.”

As for UL’s defense, the No. 1 thing on its mind is handling Miami’s size and physical play.

“This is the biggest team we’ve faced this year,” UL senior safety Deuce Wallace said. “We’re up for the challenge. We’re always ready to test a team’s physicality. We feel like that’s what we’re best at.

“You’ve got to be even more gap sound than normal. When you play smaller guys, you can start off, move them around, but with a team like this, you have to be honest with what you do from technique to eye discipline and hand placement.”

MOBILE, Ala. — UL’s defense has gotten a month of rest since struggling in the 45-38 Sun Belt Conference championship game loss at Appalachian…

“You beat that with speed and that’s something we have a lot of as an overall team,” Jackson said. “We have good speed and we play technically sound. You combat size with speed.”

MOBILE, Ala. — If everything goes as planned, UL coach Billy Napier and the Ragin’ Cajuns football program will experience much more success i…