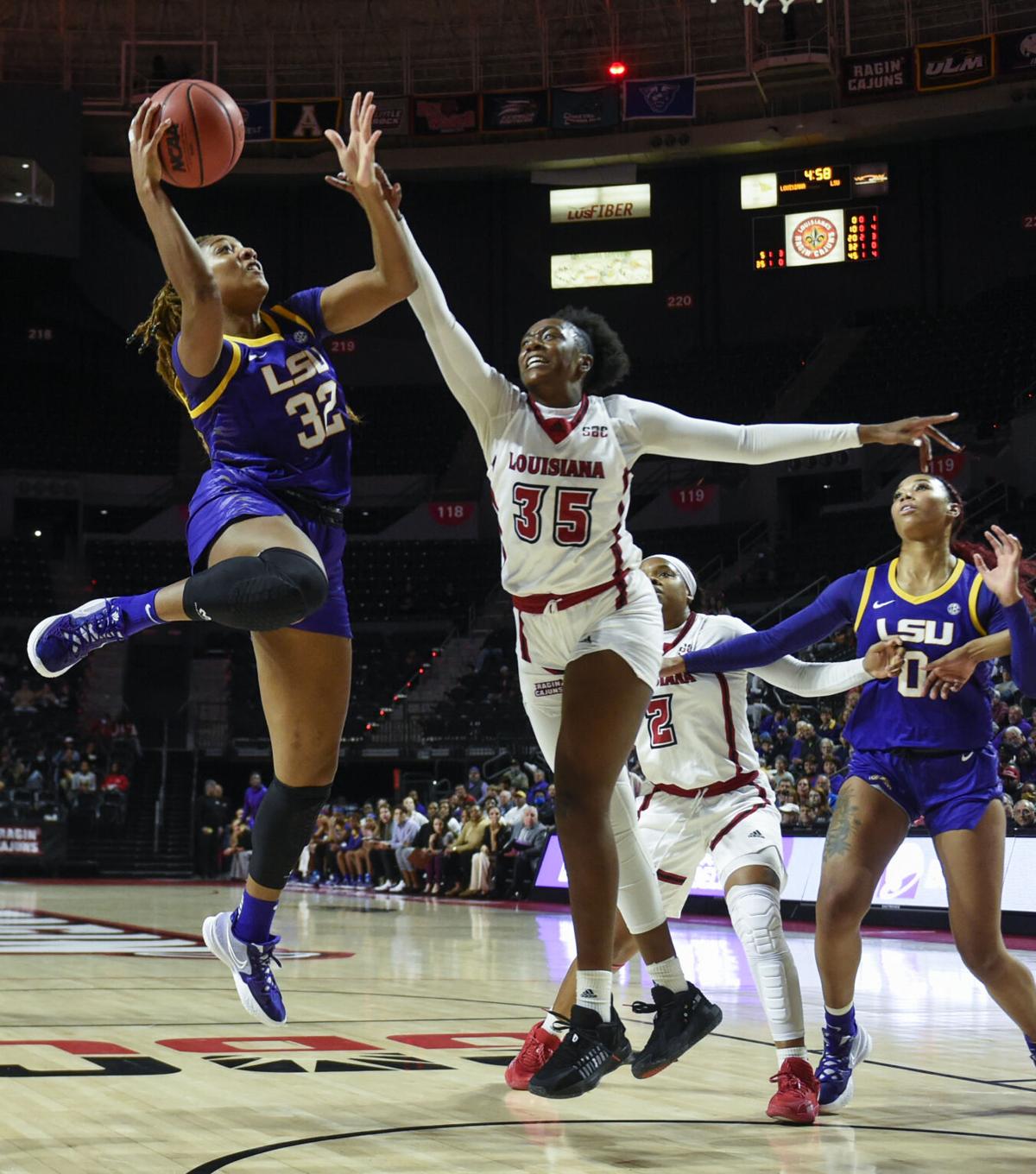 LSU forward Awa Trasi (32) shoots over UL forward Ty’Reona Doucet (35) during the Tigers' road win over the Cajuns on Thursday at the Cajundome. 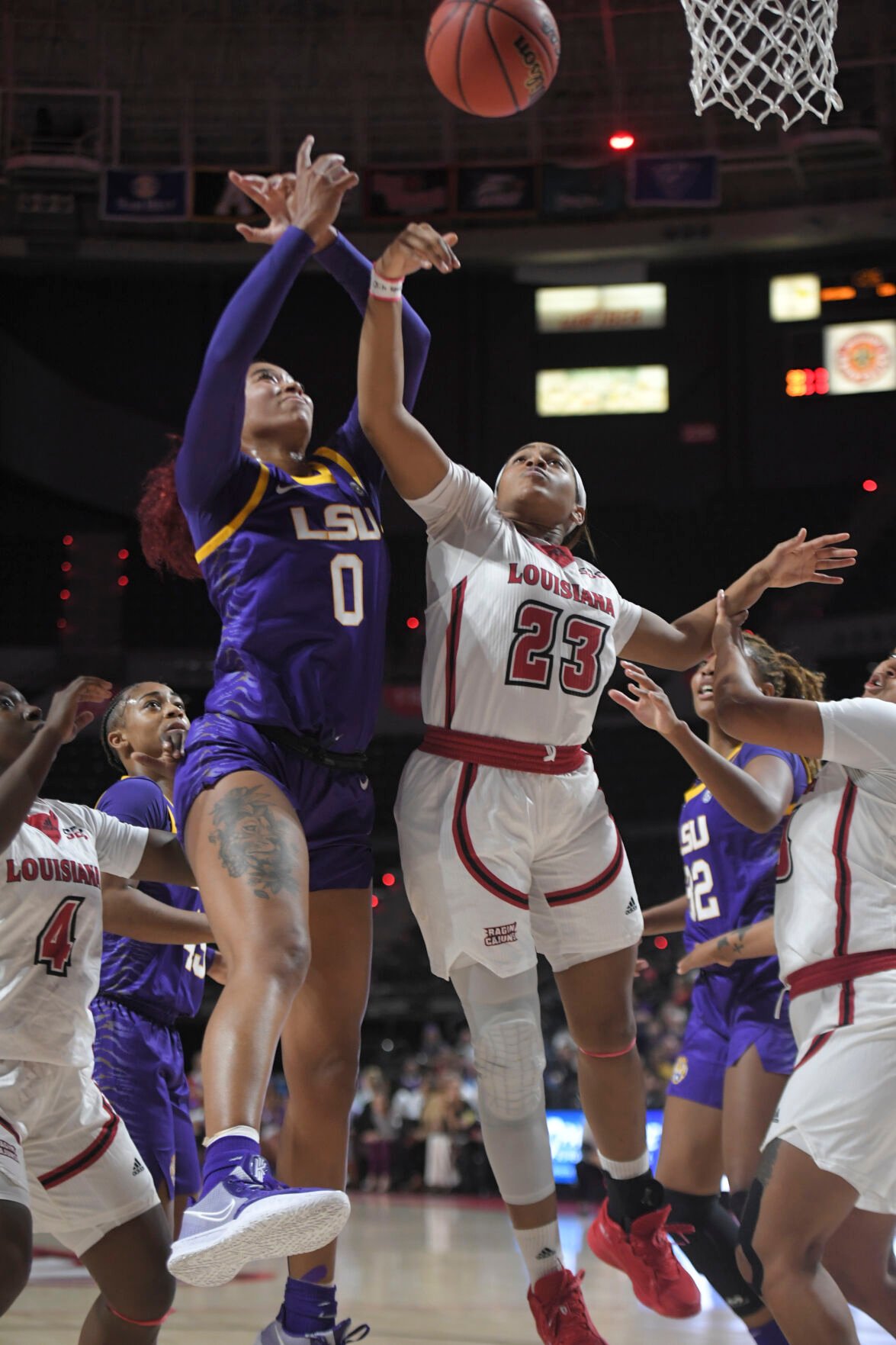 LSU forward Awa Trasi (32) shoots over UL forward Ty’Reona Doucet (35) during the Tigers' road win over the Cajuns on Thursday at the Cajundome.

Neither the LSU or UL women's basketball teams were getting much done offensively through the first half of their intrastate battle.

LSU’s Ryann Payne and Awa Trasi changed all of that.

The Tigers’ duo combined for 16 points in the first half to allow LSU to open up a big lead and coast to a 70-41 road win over the Ragin’ Cajuns on Thursday at the Cajundome.

"Thank y'all for being here and thank you for staying," LSU coach Kim Mulkey said. "If I would have paid to watch that in the first quarter, I would have left. That was some bad basketball.

"But nonetheless, we're going to keep grinding and we're going to build our program, and hopefully one day we'll be much better than that. We couldn't shoot it and UL kept turning the ball over. It was just one of those nights."

"I moved her to the post when Alexis Morris got eligible last year and she's been in the gym on her own," Mulkey said of Trasi. "She was big for us tonight. My two bigs were not as effective as my two smaller posts, so that's why I played them a lot.

"We're kind of a team where it's going to be kind of hard to do a scouting report on us because I doubt either one of those kids were probably in the scouting report as being one of the offensive players for LSU, but they (Trasi and Payne) did their job tonight and thank goodness they did."

LSU limited UL to 27% shooting from the field and forced 25 turnovers. LSU also outrebounded the Cajuns 52-29, thanks mostly to Autumn Newby’s 12 rebounds.

After a tentative first five minutes of play, it was apparent just making a few shots would tilt the scales one way or another.

That didn’t happen in the first quarter with both teams limping to a 10-10 tie. In the second quarter, LSU found the mark as the Cajuns suffered self-inflicted wounds.

The Tigers nailed three 3-pointers over the final 4:12 of the first half to open up a 30-14 cushion at intermission.

Trasi played a big role in that 20-4 second quarter. She delivered a driving layup for a 17-12 lead, then fought through physical defense for a bucket in the lane to get LSU’s lead to 24-14 with 1:46 left. Trasi nailed a 3-pointer for the 16-point halftime lead.

The other 3-pointers came from Payne and Khayla Pointer. Payne and Trasi were the only players on either team to shoot it well in the first half. LSU hit 42.9% of its 3-pointers to overcome its 25% shooting in the first quarter.

The Cajuns couldn’t buy a shot. In the first half, UL was whistled for six traveling violations en route to 17 turnovers and made only 22.7% of its 22 field goal attempts.

"I guess that's how the SEC plays, because they just let us play," UL coach Garry Brodhead said. "The other two games weren't like that. I hate to watch the points of emphasis film that we have to watch, because by the third or fourth game, they just throw it out the window. We just have to get used to it. We hadn't seen that this year yet. Even at Rice on the road, we didn't see that kind of play."

Mulkey didn't think the game was too physical.

On Saturday, the Cajuns made 10 of 11 shots from the field in the fourth quarter to score 32 points in that period during a come-from-behind victory over Rice. On Thursday, UL didn’t get to 32 points until late in the third quarter.

Destiny Rice was the only Cajun to make at least half of her attempts in the first half at 1-of-1. She finished with 10 points and seven boards.

Brandi Williams gave UL a small scoring punch in the second half, becoming the Cajuns’ first player to reach double figures with a seven-point third quarter. Williams got off only three shots in the first half due to all of the turnovers. She didn’t score in the fourth quarter and finished with 10.

UL limited its turnovers to one in the third quarter and shot 44% from the field, but still trailed by 18 heading into the fourth period.