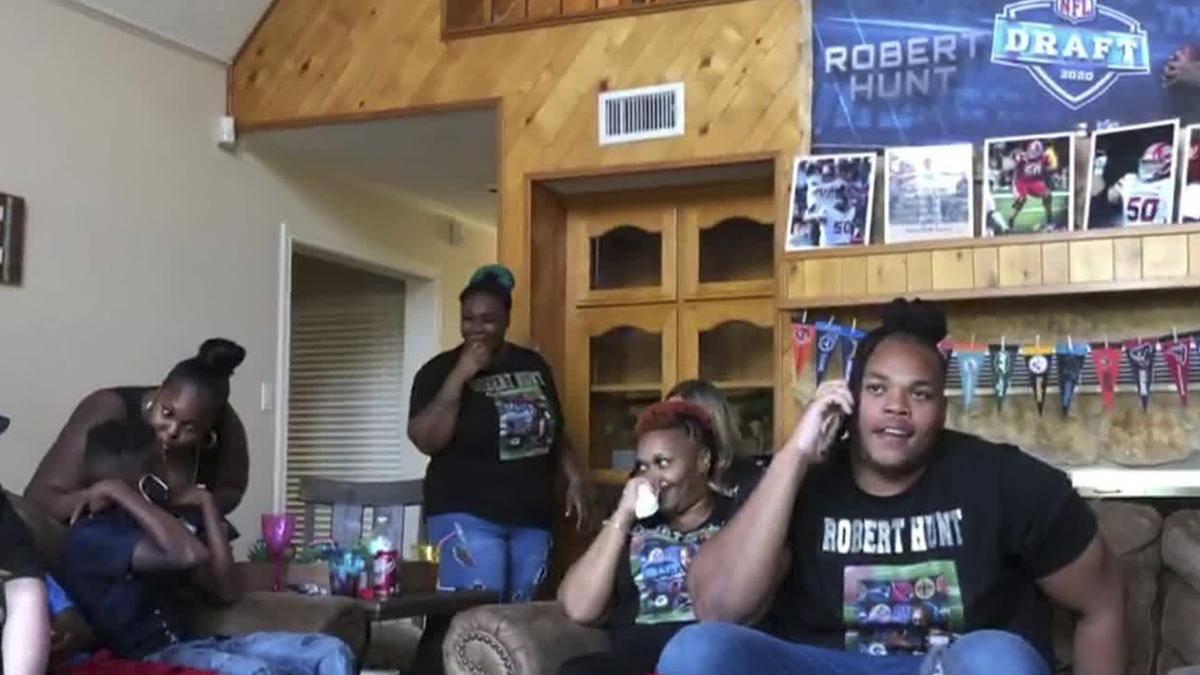 In this still image from video provided by the NFL, Robert Hunt, right, is selected by the Miami Dolphins during the second round of the NFL draft Friday night. 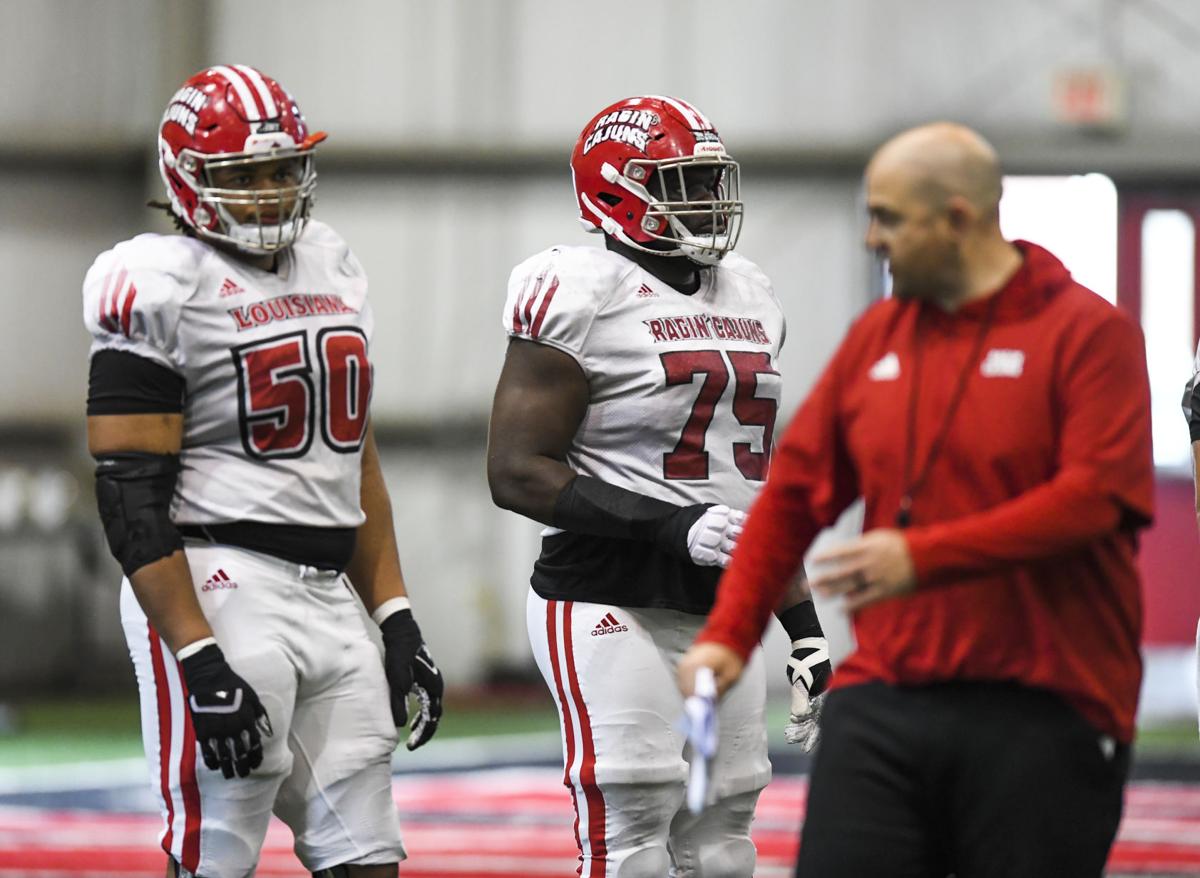 UL football offensive linemen Robert Hunt (50), left, was drafted in the second round of the NFL draft with the No. 39 overall pick by the Miami Dolphins.

In this still image from video provided by the NFL, Robert Hunt, right, is selected by the Miami Dolphins during the second round of the NFL draft Friday night.

UL football offensive linemen Robert Hunt (50), left, was drafted in the second round of the NFL draft with the No. 39 overall pick by the Miami Dolphins.

Robert Hunt’s rise from an unknown college prospect to an NFL draft possibility became reality Friday when the UL offensive lineman was selected by the Miami Dolphins with the No. 39 overall pick in the second round.

Starting his football career in a town of fewer than 2,000 people in Burkeville, Texas, the 6-foot-5, 317-pound Hunt began his collegiate journey as a guard during his redshirt freshman season.

Hunt nearly became the highest UL player ever drafted. That distinction still belongs with cornerback Charles Tillman at No. 35 by the Chicago Bears in 2003, one spot ahead of Cecilia’s Anthony Clement at No. 36 with Arizona in 1998.

When the NFL mock drafts began heating up after the Super Bowl, three former UL Ragin’ Cajuns were in at least some of the early guesses.

The Cajuns' only other second-round pick was Crowley’s Orlando Thomas at No. 42 with Minnesota in 1995.

"We couldn't be more proud of Robert Hunt as he continues his journey into the National Football League,” UL coach Billy Napier said. “From the very beginning, Robert was someone who has been a leader in our locker room and in our community. He will be an outstanding representative of the Ragin' Cajuns at the next level, and the Miami Dolphins will find out quickly how tremendous he is, as both a person and as a football player."

Hunt finished his career with the’ Cajuns as a starting right tackle his final two seasons. Most NFL teams indicated to Hunt before the draft that they saw him as a guard.

Analysts claimed the Dolphins may give Hunt a chance at tackle.

“Me, I don’t mind where I play,” Hunt said before the draft. “I’m comfortable at right tackle, but I can definitely play guard. I think I do it well.

“I think my body type would be very big for a guard.”

Hunt’s senior season was cut short after seven games by a sports hernia injury. Still, he was invited to the Senior Bowl. He attended the week in Mobile, Alabama, but wasn’t able to practice or compete in the game.

Hunt also was invited to the NFL combine. Again, he handled the interview portion but wasn’t able to participate physically.

He was also part of an offensive line that ranked fifth nationally and first in the Sun Belt in sacks allowed (1.07) during the record-breaking season.

After months of waiting through the most unusual offseason in NFL history, NFL draft weekend is finally here for at least a trio of UL Ragin’ …

Hunt's pro day was canceled because of the coronavirus shutdown, and with a lack of in-person contact with NFL front-office personnel, Hunt had several obstacles to overcome — but he still attracted enough attention to go in the second round.

“Everything happened for a reason,” Hunt said.

Perhaps the Dolphins like him most of punishing, run-blocking guard due to the opinion that Hunt’s “hands are like clamps once they take root into defender’s frame.”

One supposed drawback is his “footwork is a little raw and undisciplined.”

Like many NFL prospects hoping to get drafted next month, former UL right tackle Robert Hunt is trying to navigate his preparation for that bi…

Like many draft prospects, ESPN and the NFL told the story of Hunt’s humble beginnings to the nation during Friday’s draft broadcast.

The UL football community is hoping Hunt's selection is the beginning of a historic draft in the program's history. Former teammates guard Kevin Dotson, running back Raymond Calais, wide receiver Ja'Marcus Bradley and cornerback Michael Jacquet are among Cajuns hoping to get selected in rounds three through seven.

The only year UL had more than two players drafted in the same season was 1989, when Chris Gannon was picked in the third round by New England, Mark Hall in the seventh round by Green Bay and safety Thomas King by the Packers in the eighth round.

UL guard Kevin Dotson picked in fourth round by Steelers

Since the news came that UL first-team AP All-American guard Kevin Dotson didn’t receive an invitation to the NFL combine, the four-year start…