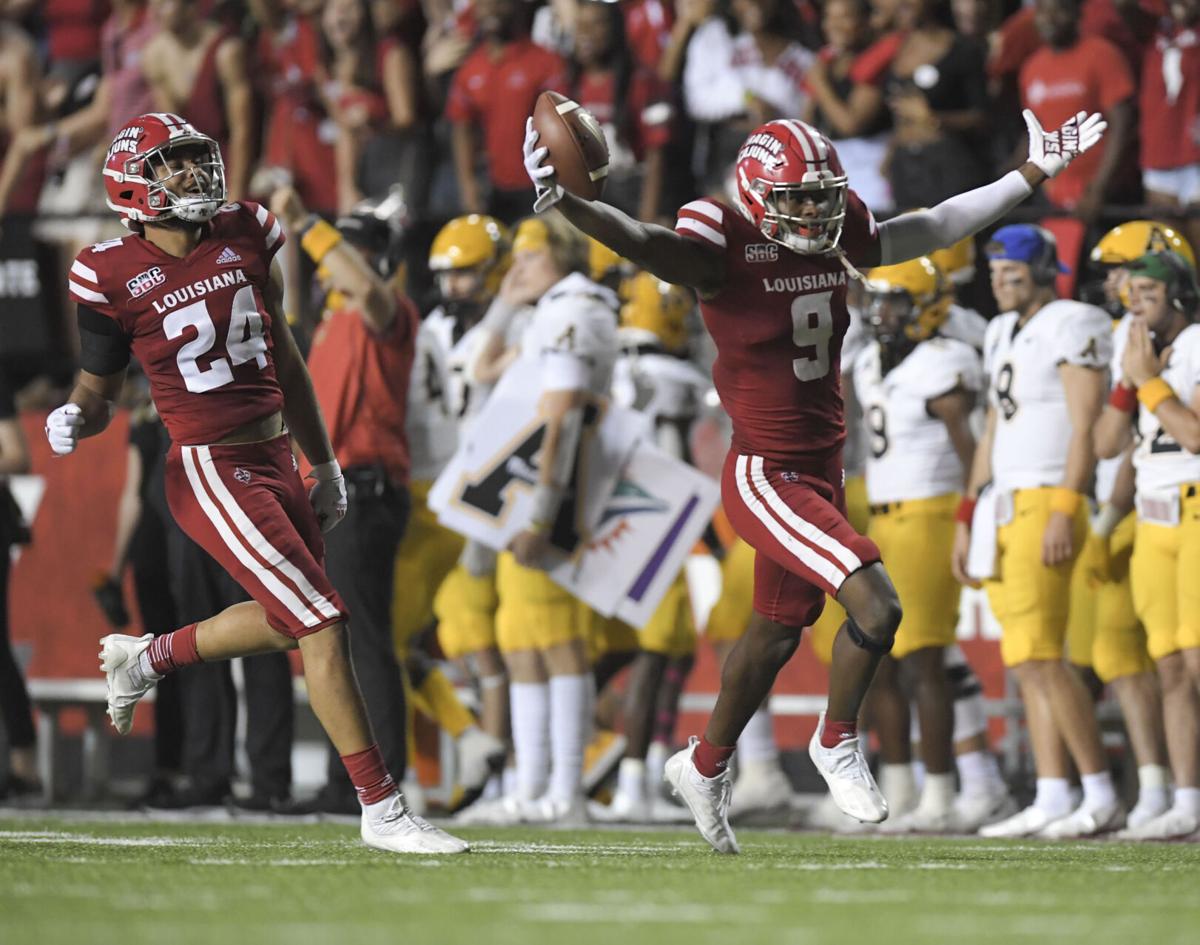 UL safety Percy Butler (9) celebrates after recovering a fumble during the Cajuns' 41-13 win over Appalachian State on Tuesday. 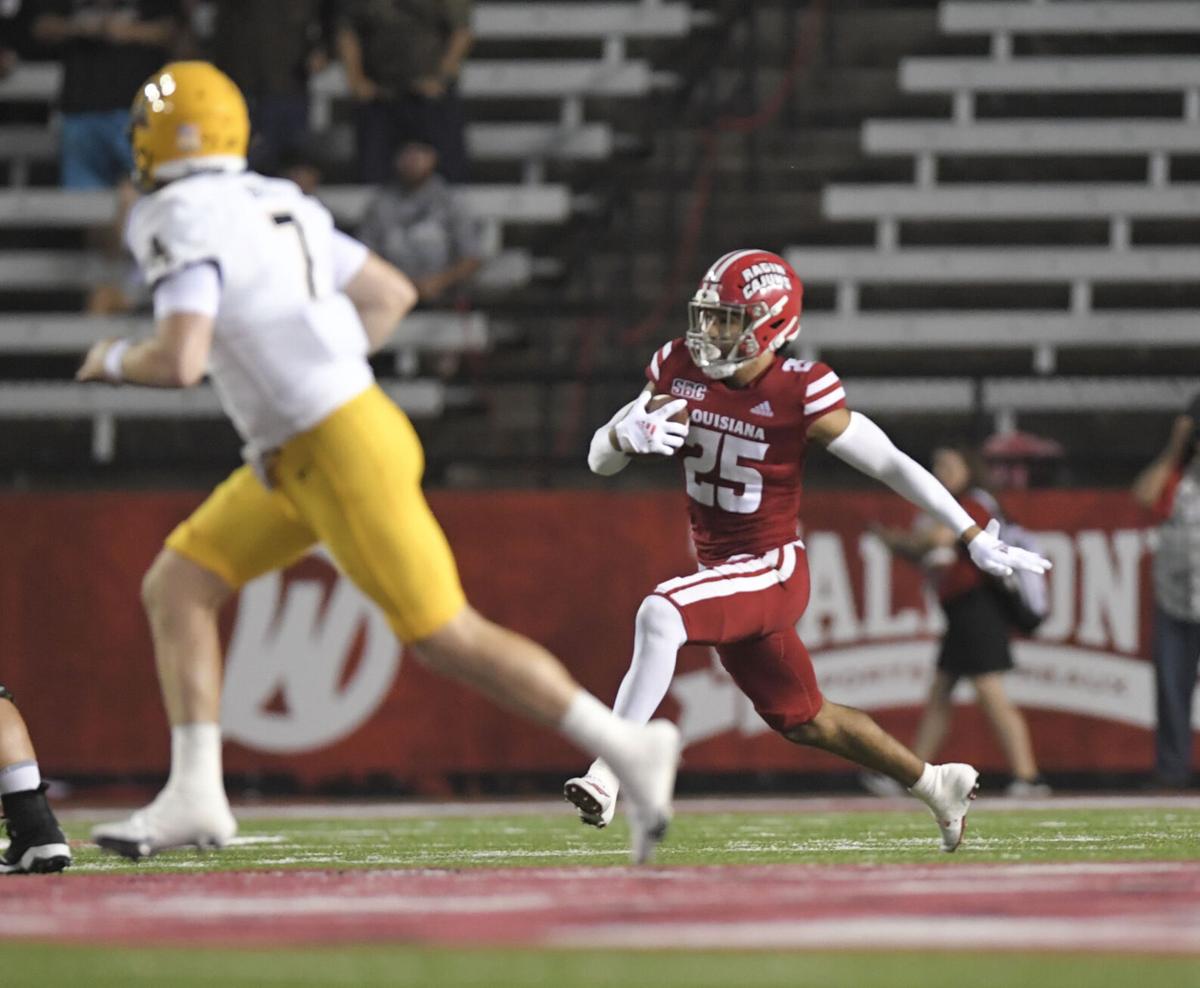 UL safety Percy Butler (9) celebrates after recovering a fumble during the Cajuns' 41-13 win over Appalachian State on Tuesday.

The UL Ragin’ Cajuns have transformed from a team that limped to wins over Georgia Southern and South Alabama to a squad that thoroughly dominated Appalachian State over a three-week span.

To explain why, a good place to start is the secondary.

A year ago, UL’s secondary produced 16 interceptions with an aggressive style that made passing on the Cajuns a chore.

That approach returned in a 41-13 victory Oct. 12 over Appalachian State. UL had two interceptions in the game after picking off just two passes over the first five games.

A few weeks ago, the news wasn’t good when it came to UL’s offensive line.

The Cajuns also forced two fumbles in the win after forcing only one in 2021.

Prior to the Appalachian State game, opposing offenses were converting 46% of their third downs against the Cajuns. Against the Mountaineers, the secondary played a huge role in limiting the visitors to zero conversions on 11 third downs.

“More like what we expect around here,” UL coach Billy Napier said of the performance. “Our secondary has been the strength of our defense for a long time, for the last couple of years. We got a little bit more of what we expect and the brand of football that we want to play here.”

But why did such a dramatic improvement take place against one of the top teams on the UL schedule?

“No, it wasn’t really anything different,” sophomore safety Brandon Bishop said. “It was just all 11 on defense coming together and just winning their one-on-ones — winning their matchups — and just executing the calls.”

Napier concurred with the assessment.

A year ago, the UL defense led the Sun Belt and was third nationally with 16 interceptions.

“I think it’s as simple as really good communication, really good alignment, playing with the correct leverage, the correct eye discipline, using the correct fundamentals and techniques, tackling well when given opportunities and playing good team defense,” he said.

Napier did reveal the safeties were a bit more aggressive against the run than in previous games.

“I think each opponent is a little bit different,” Napier said. “There’s a little bit of a chess match. You’ve got to have some balance there. Every defensive call’s got some weakness to it. You’re oftentimes trying to take something away understanding you’re weak against certain things in certain calls.”

As a result, Percy Butler was the defense’s third-leading tackler with six, and Cameron Solomon was next in line with five stops.

“Certainly that was part of our plan, but there were other times when we played split safety and doubled the outside receiver and doubled the inside receiver,” Napier said. “You’re always trying to have balance there and create variables. It’s a little bit of a chess match within each game.”

The way defensive coordinator Patrick Toney puts it, it’s all about the junction points. That’s his way of saying it’s a matter of each one of UL’s 11 defenders winning his one-on-one battle when it matters most.

The UL Ragin’ Cajuns knew they needed to play their best game of the season to knock off Appalachian State on Tuesday at Cajun Field.

After the close call against South Alabama, a frustrated Napier embarked on “quality control session” practices to upgrade the weak areas. Bishop and the safeties got the message.

“Tackling and man-to-man coverage and handling the schemes of defenses like motions and adjustments,” Bishop said. “That’s pretty much all we had to get better at in the safety room.”

Now comes the chore of transferring that level of execution to Thursday’s road contest against Arkansas State (1-5, 0-2), which doesn’t have the glittery 4-1 record the Mountaineers possessed.

'Time for us to be a team': Cajuns come together on national TV to overwhelm rival, silence doubters