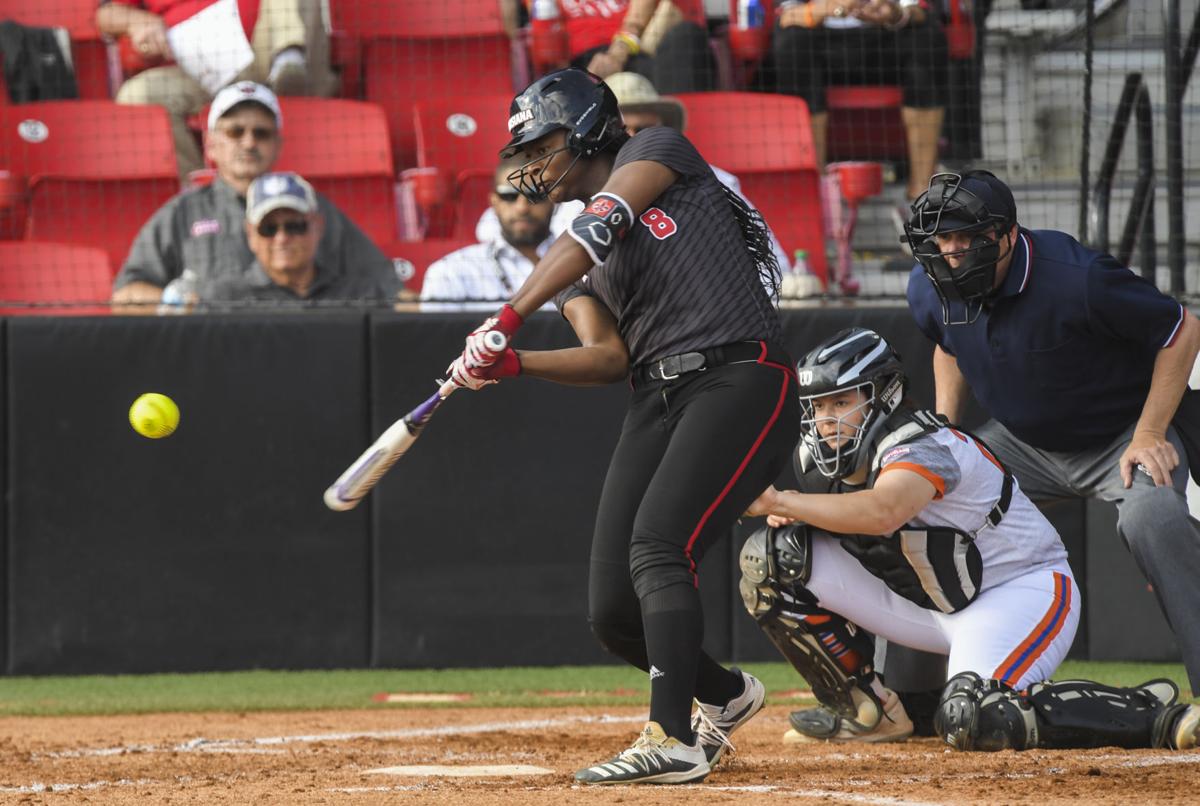 UL's Taylor Roman (8) made the switch to first base during the fall to make room for transfers Jenna Kean and Ciara Bryan as coach Gerry Glasco assembles as much speed as he can for the 2021 roster. 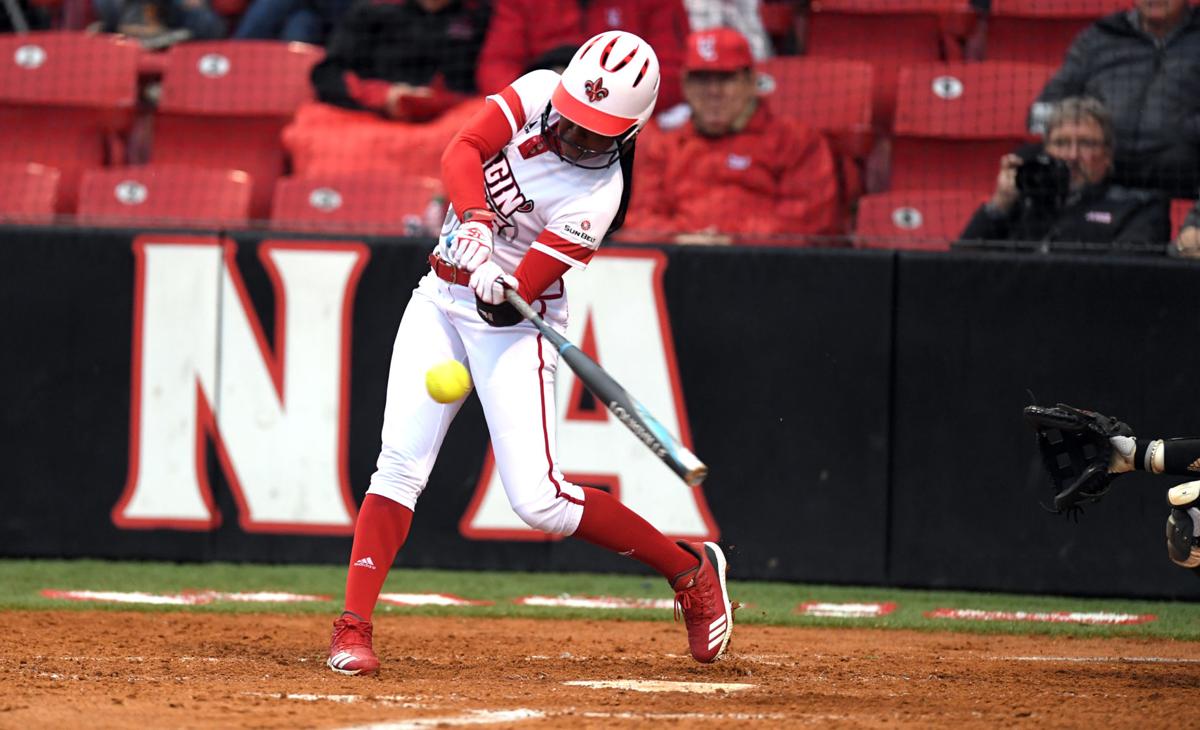 UL's Raina O'Neal is expected to be the only returning starter in the outfield for the Ragin' Cajuns for the 2021 softball season.

UL's Taylor Roman (8) made the switch to first base during the fall to make room for transfers Jenna Kean and Ciara Bryan as coach Gerry Glasco assembles as much speed as he can for the 2021 roster.

UL's Raina O'Neal is expected to be the only returning starter in the outfield for the Ragin' Cajuns for the 2021 softball season.

With a team full of newcomers, the fall softball season was a critical step for the UL Ragin’ Cajuns … pandemic or not.

Leave it up to coach Gerry Glasco to get everything he could out of it.

“We had a great fall,” Glasco said. “We ended up getting 21 scrimmages in. Our leading hitters had 60 at-bats. That’s almost half of a season. I thought it was a phenomenal fall. We clearly found out who our best players were and who our worst players were.

There was one thing, however, Glasco wasn’t able to get accomplished during the fall season.

He still isn’t sure who will fill the role as the pitching staff’s No. 2 pitcher behind senior ace Summer Ellyson.

“Nobody clearly separated themselves,” said Glasco, whose Cajuns were 18-6 against the nation's toughest schedule before the coronavirus shutdown in March. “There were actually four girls that on any given day looked like our second-best pitcher, and that might actually end up being a good thing.”

“All four at times really good in the fall and at times they all struggled,” Glasco said. “That’s what we’ve got to decide in January and early February. We’ve got to find out if any one of them can separate themselves as our No. 2 behind Summer. If they can’t, then we’ve got to figure out a way to use all of them, which could be good too.”

The good news is Dixon displayed the most velocity she’s shown since her freshman season. Lamb, meanwhile, exhibited better control. Foreman showed her potential with a perfect four innings in one of her outings.

“Kandra Lamb looked really good at the end,” Glasco said. “I’m really excited about her. I’ve always thought she had potential. If she doesn’t walk people, she’s going to be tough. Her control was better, and she has a really good change-up now. She’s gotten in so much better shape.”

While the staff has already posted a "stay tuned" stamp on that issue, Glasco has very few doubts about the other two sides of the game.

And he feels even better about the team’s prospects on defense.

“I know we’re going to have a really good defense,” he said. “Our defense is going to be as good as anybody’s in the country, if we don’t have injuries. This is going to be the best defense we’ve had since I’ve been here — hands down by far.”

Much of the reasoning behind both of those statements is centered around the team’s speed. Speed that will be a major part of his hitting philosophy this year and speed in the outfield that can track down fly balls.

“I want speed all over the field this year,” Glasco said. “I want to be the fastest team in the country this year.”

With Arizona transfer Jenna Kean in left and Georgia transfer Ciara Bryan in right sandwiched around returning Raina O’Neal in center, there’s no shortage of speed.

“Kean and Bryan may be the fastest two kids on any one team in the country,” Glasco said.

The idea is Glasco loves home runs, but when the long ball isn’t there, he wants other options.

“I looked at our offense two years ago with Keeli Milligan, and I thought it was more consistent than our offense last year. We had more power (last year), but we weren’t as consistent.”

Glasco’s other big offseason goal is to force depth just in case COVID-19 robs UL of multiple players at the spur of the moment entering a weekend series.

On the infield, it all starts with the shortstop battle. Glasco thinks he may have the two best defensive shortstops in the country in incumbent Alissa Dalton and Arizona State transfer Jade Gortarez.

Dalton won the fall battle, although Gortarez tightened it up down the stretch. Glasco said he may alternate some in the spring, but both will play … likely at third base.

Glasco’s plan is to rotate those four infielders so all are ready in case COVID-19 hits unexpectedly.

And that doesn’t include freshman shortstop Kyleigh Sand, who is “the best freshman we’ve had in my four years here,” or Georgia transfer Justice Milz, who was a second-team All-SEC player as a sophomore.

For the record, Brittany Holland entered the transfer portal earlier this week and won’t be back, along with reserve catcher Geana Torres.

Julie Rawls returns as the starting catcher, although Dalton, designated player Bailey Curry and freshman Sophie Piskos are potential options behind the plate.

Freshman Taylor Roman made the move from outfield to first base in the fall and “did a great job.”

Roman, Curry, Rawls and Carrie Boswell will be in the DP/catcher/first base rotation to keep everyone fresh, while Kendall Talley is expected to get plenty of time as a busy fourth outfielder.

“We’ve got 15 players … really good players,” Glasco said. “That’s really going to be big this year. I don’t want to go into a weekend, lose five players and then not be ready.”

When 6-foot-5, 333-pound Tayland Humphrey transferred to UL from Florida International before the 2019 season, there were many questions to be…