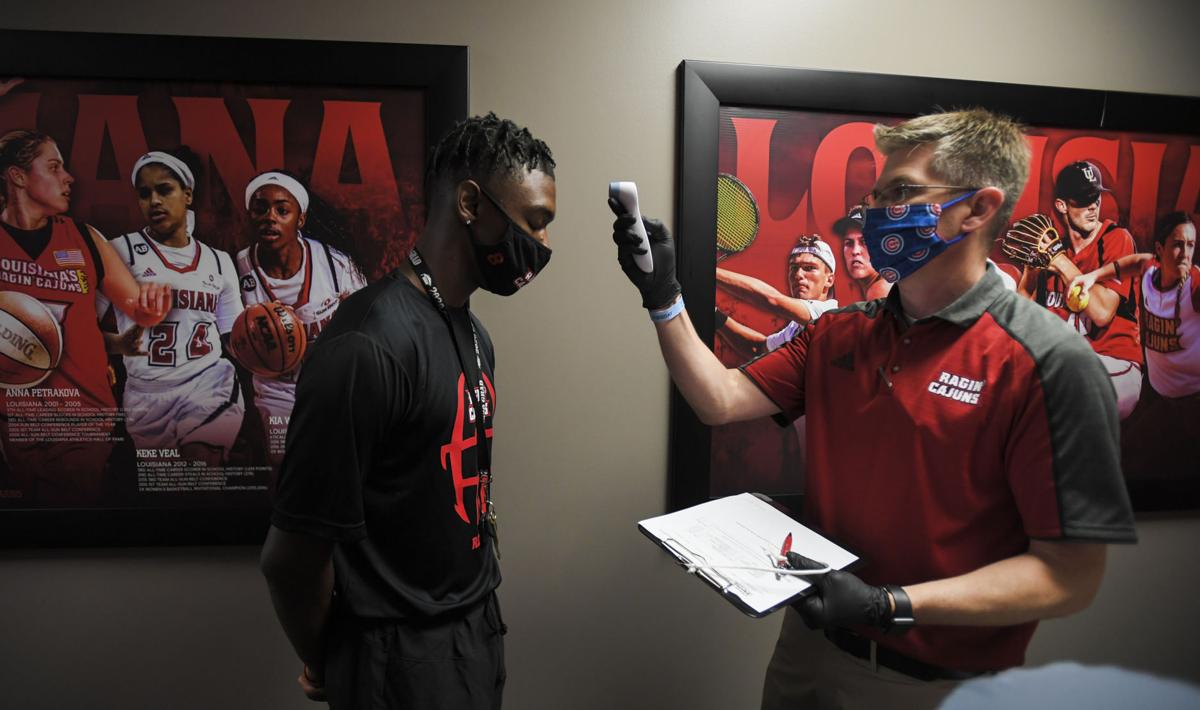 Daily temperature checks are a main part of UL football program's procedure each day as players arrive for voluntary workouts. 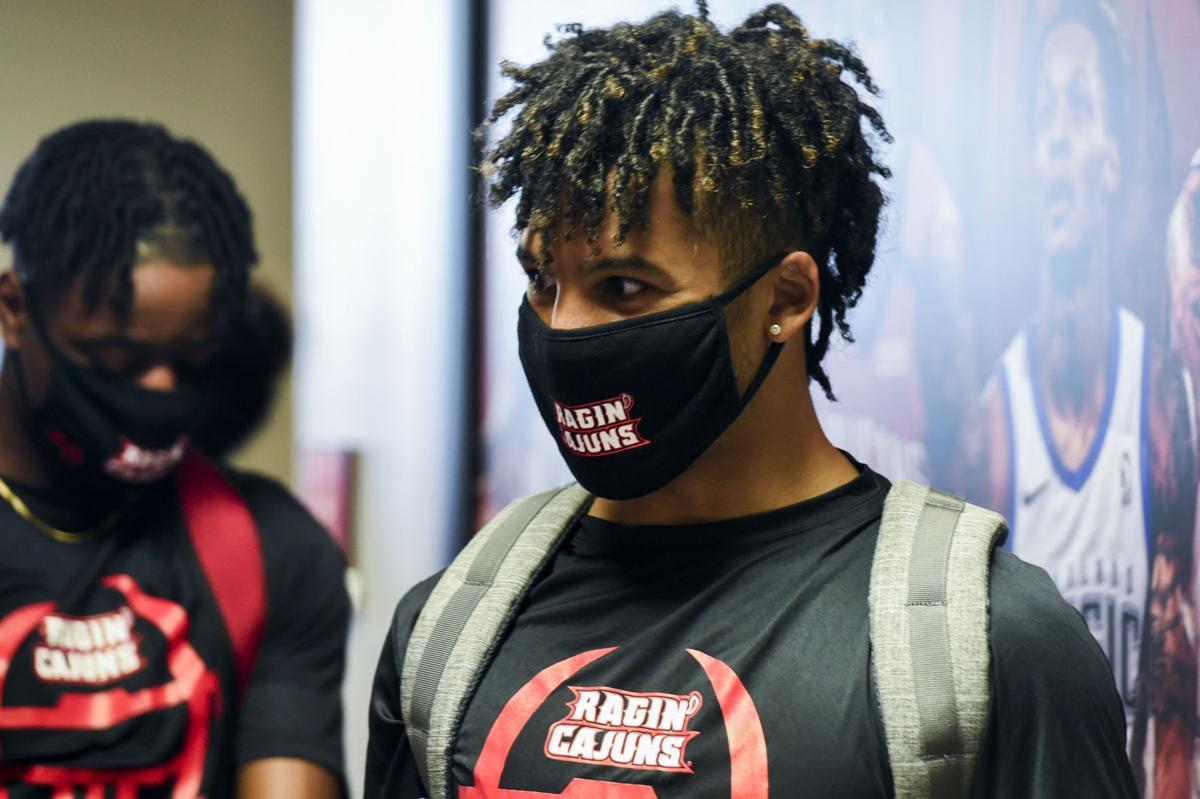 Football players must also wear masks when arriving for voluntary workouts each day to the UL athletic facility. 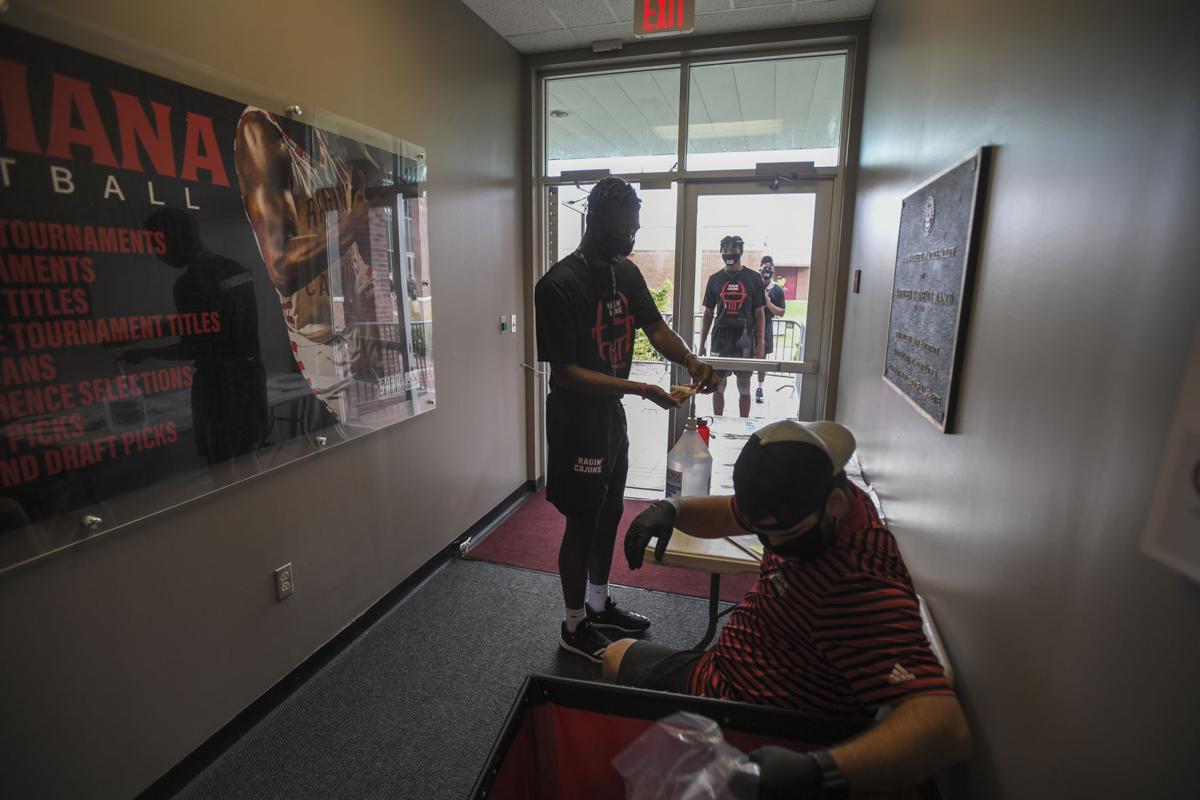 UL football players have access to hand sanitizer as part of their daily procedures during voluntary workouts.

Daily temperature checks are a main part of UL football program's procedure each day as players arrive for voluntary workouts.

Football players must also wear masks when arriving for voluntary workouts each day to the UL athletic facility.

UL football players have access to hand sanitizer as part of their daily procedures during voluntary workouts.

UL football coach Billy Napier certainly addressed several areas pertaining to his football team’s return to campus Tuesday for voluntary workouts after a three-month separation due to the coronavirus shutdown.

First and foremost, Napier confirmed none of his players tested positive for COVID-19 over the first two days.

But a large portion of Napier’s zoom teleconference with area media Wednesday revolved around his program’s reaction to the aftermath of George Floyd’s death throughout the country.

Structurally, the program’s plan begins with the team being divided into smaller groups over the next four weeks. That helps both social distance for safety purposes, but also to make group discussions about racial inequality and injustice more productive.

It even extends to on-campus housing, so “we put those guys together to just limit if we were to have a positive test, the contact tracing that goes with that.”

But as of the second week of June, the most productive result of those groups have been the discussions on the issues of police brutality and racism in America.

From Napier’s perspective anyway, the conversations have been extremely beneficial.

“I don’t think we’ve ever been more together or more united than we are at this point,” Napier said.

The value of the dialogue have ranged from understanding to empathy.

“Those conversations continue daily,” Napier said. “We started with our leadership group and then specifically once the players were back, had an opportunity to speak to each run-and-lift group independently. It’s just an impressive group of guys. That’s what I would say about our football team. We’ve worked really hard on what these guys are as people for the last two years and I think that that’s what’s been impressive to me – to see these guys during this time really step up to the plate.”

Naturally, not all of those conversations were pleasant.

“It’s not all positive relative to what’s going on,” Napier said. “You do have players who have had difficult situations themselves or maybe within their family and they’re hurting. They’re scared at time. I think they’re angry. There’s some frustration there. It is disturbing that these events continue to happen.

“I know that they don’t reflect all of our law enforcement. We’re certainly very appreciative of all the people that serve our country in those capacities.”

Napier said he expects change to come from this current racial equality movement.

“I think more than ever people are listening,” he said. “I think the leadership we have at all levels of government, I think you’re going to see good things come from this. That’s what I think our team would like to see and I think that’s what we’re going to work hard to do.

Consequently, Napier plans to include the movement’s objectives to improve society into his team plans.

For starters, the staff organized a meeting Wednesday evening between his players and campus police, city police and state troopers.

Secondly, Napier said he’s going to encourage his players “to get involved with on-campus organizations, student organizations and certainly even at the state and national levels. We’ve done some things already as an athletic department that I think have been positive.”

But he also plans to add these issues to his long-term planning.

“I think big picture here, we’ll tweak our year-round plan,” he explained. “We’re going to try to create more conversation and more opportunities for us to really hit this issue head on and try to use our platform for better."