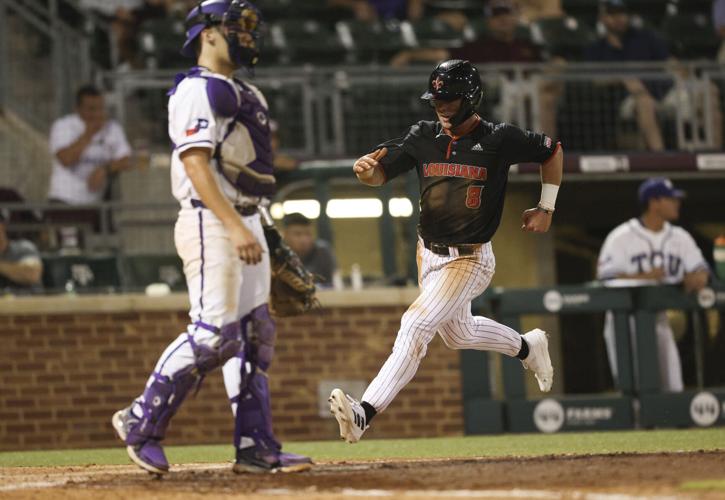 Louisiana outfielder Heath Hood (8) scores against Texas Christian University in the sixth inning on June 3, 2022 in the first round of the NCAA baseball tournament at Blue Bell Park in College Station, TX. 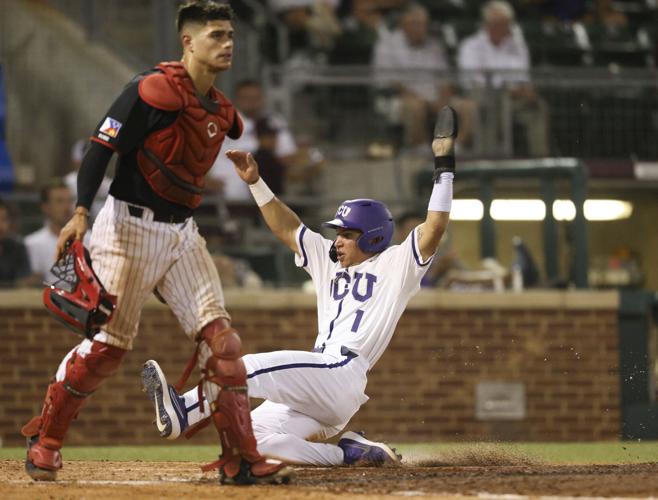 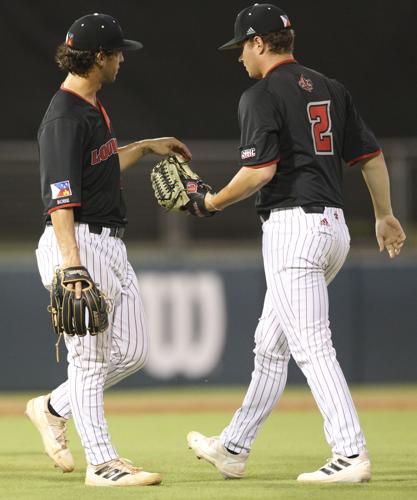 Louisiana pitcher Austin Perrin (27) hands the ball over to pitcher Bo Bonds (2) In the fifth inning against the Texas Christian University on June 3, 2022 in the first round of the NCAA baseball tournament at Blue Bell Park in College Station, TX. 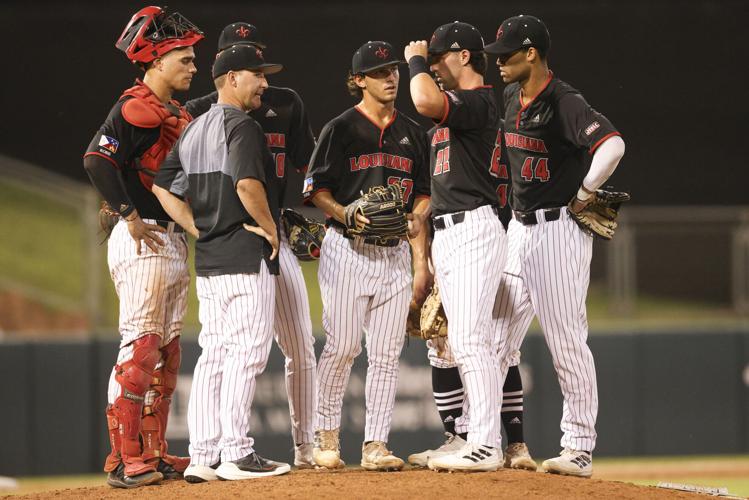 Louisiana pitcher Austin Perrin (27) comes out of the game against the Texas Christian University in the fifth inning on June 3, 2022 in the first round of the NCAA baseball tournament at Blue Bell Park in College Station, TX. 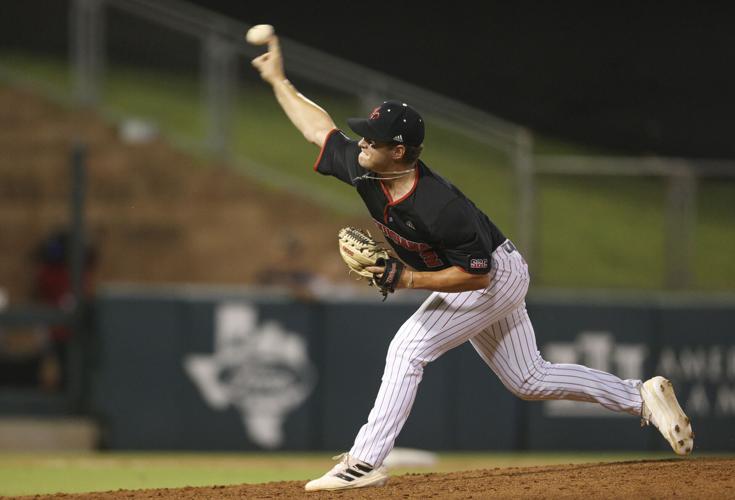 Louisiana pitcher Bo Bonds (2) pitches against the Texas Christian University In the fifth inning on June 3, 2022 in the first round of the NCAA baseball tournament at Blue Bell Park in College Station, TX.

Louisiana outfielder Heath Hood (8) scores against Texas Christian University in the sixth inning on June 3, 2022 in the first round of the NCAA baseball tournament at Blue Bell Park in College Station, TX.

Louisiana pitcher Austin Perrin (27) hands the ball over to pitcher Bo Bonds (2) In the fifth inning against the Texas Christian University on June 3, 2022 in the first round of the NCAA baseball tournament at Blue Bell Park in College Station, TX.

Louisiana pitcher Austin Perrin (27) comes out of the game against the Texas Christian University in the fifth inning on June 3, 2022 in the first round of the NCAA baseball tournament at Blue Bell Park in College Station, TX.

Louisiana pitcher Bo Bonds (2) pitches against the Texas Christian University In the fifth inning on June 3, 2022 in the first round of the NCAA baseball tournament at Blue Bell Park in College Station, TX.

COLLEGE STATION, Texas As if there wasn’t enough drama at the Sun Belt Tournament in Alabama last weekend, the No. 3-seeded UL Ragin’ Cajuns took their cardiac carnival to Texas and pulled off a dramatic 7-6 win over No. 2-seeded TCU on Friday at Olsen Field.

“I thought it was a heck of a game,” UL coach Matt Deggs said. “It was one of our best games all year from a toughness standpoint and aggressive standpoint. We just kept coming and coming. TCU is obviously a really good ball club. They ran some good arms at us tonight. I thought we did a good job of competing all night.”

The win was the program’s first NCAA regional win since defeating Arizona 10-3 at home in the 2016 Lafayette Regional. The Wildcats responded by beating UL twice the next day to win that regional crown.

The victory didn’t come without a price, however. With normal designated hitter Connor Kimple already out with a back issue, the Cajuns lost speedy centerfielder Max Marusak when he pulled up trying to beat out a ground ball to lead off with seventh.

Officially, Deggs said Kimple is day-to-day and Marusak “popped his hamstring, so I wouldn’t look for him any time soon,” reducing the depth in the outfield.

“We’ve got some guys playing banged up, playing hurt,” Deggs said. “It just speaks to the brotherhood these kids have. That’s their strength is their bond.”

Despite more unforeseen obstacles, the Cajuns found a way to overcome with two-out magic all night long. Seven of UL’s eight hits and all seven of its runs came with two outs.

That clutch hitting and of course the pitching of gutsy reliever Bo Bonds, who got the win after pitching 4.2 huge innings of relief for the Cajuns. The sophomore right-hander gave up two runs on three hits, one walk and struck out seven against a TCU lineup that batted .296 for the month of May.

But Bonds walked lead off batter Elijah Nunez, meaning reliever Dylan Theut had to face TCU’s top hitter in shortstop Tommy Sacco, who had doubled and homered already in the game.

“That’s been him all year, man,” Deggs said of Bonds’ relief effort. “He is a warrior on the mound. He loves to compete. He’s an adrenaline junkie. We lives for that big moment.

“I would have loved to stick with him right there. It’s unfortunate, with that last pitch, he felt a little discomfort and I didn’t want to chance anything with him.”

Theut walked Sacco and then coaxed a ground out to end it.

“That was a gigantic 3-2 breaking ball he (Theut) he was able to land,” Deggs said.

UL used the power bats to jump out to an early 3-0 lead with a three-run second inning. First, Will Veillon hit a long two-run homer to left one batter before Trey LaFleur smashed an even longer on to right center for the quick three-run cushion.

LaFleur was serving as the Cajuns’ designated hitter and hitting in the ninth spot in the lineup.

“I thought Veillon’s first at-bat got us going and then Trey following that,” Deggs said.

Everyday designated hitter Connor Kimple was not in the starting lineup with a back injury.

In the bottom of the third, though, UL senior southpaw starter Brandon Talley elected to pitch to Sacco with two outs and a runner on third base. The switch-hitter made the Cajuns regret that decision with a two-run homer to narrow UL’s gap to 3-2.

Austin Perrin gave UL one-plus inning in relief, but gave Bo Bonds two on with no outs for Sacco in the fifth. Bonds got a big strikeout of Sacco and a ground out, but then Kurtis Byrne delivered a clutch two-out, two-run single to right to give the Horned Frogs their first lead of the night at 4-3.

At that point, UL’s offense hadn’t collected a base hit since LaFleur’s homer in the second. That would change in the top of the sixth.

Julian Brock, who made a rare error on a sacrifice bunt in the previous inning, ended that drought with a clutch RBI single to right to knot it at 4-all.

“Coach is very big on responding,” Brock said. “I feel like in that moment, I had to do something big. We had two outs and that’s typically our bread-and-butter. I felt like that was a good opportunity to tack one on that stolen base that Heath (Hood) had.

“That was huge. To be a momentum-killer, that’s a big trait for a team to have.”

C.J. Willis transformed it into a crooked-number frame with an RBI triple to right for a 5-4 lead. Willis was the only UL hitter with two hits at 2-for-4 with an RBI.

“That’s kind of what we work on is with two outs,” Willis said. “That’s what we like doing. It’s kind of our bread-and-butter. Our job is just to get it to the next guy. Don’t try to do too much, just put the ball in play and make the defense make a play.

“Sometimes, it works out and sometimes it doesn’t, but you have to put pressure on the defense.”

TCU returned the favor in the seventh. Carson Roccaforte ended his 2-for-14 slump with a single and stolen base with two outs. Tyler Robertson followed with a slow roller to third for an infield single, but the throw the wild to chase home Roccaforte with an insurance run and a 6-4 lead.

“It didn’t phase these kids,” Deggs said after early caught stealing. “They just kept going, kept running. It paid off eventually and forced a couple of mistakes. We were able to steal a couple big bags. Our speed definitely loosened some things up for us. We came up with some big hits tonight too.”

That proved critical because Porter Brown tagged Bonds with solo blast to left in the seventh to cut UL’s lead to 6-5.

Similarly, a two-out Warnner Rincones shot off the pitcher resulted in a throwing error that gave UL a two-run cushion for Bonds. That throwing error gave both teams two unearned runs on the night.

The Horned Frogs entered the game ranked No. 21 nationally in defensive fielding percentage for the season.

“I give them a lot of credit for how competitive they were,” TCU acting head coach Bill Mosiello said. “A lot of it was us giving it to them, but they outplayed us.”

The drama wasn’t done yet, though.

TCU added more two-out hitting of its own when David Bishop got a line RBI double to right in the eighth to cut UL’s lead to 7-6.

Deggs said Jacob Schultz, who threw a 142 pitches last Saturday, will be good to start Saturday night’s game against the Aggies.