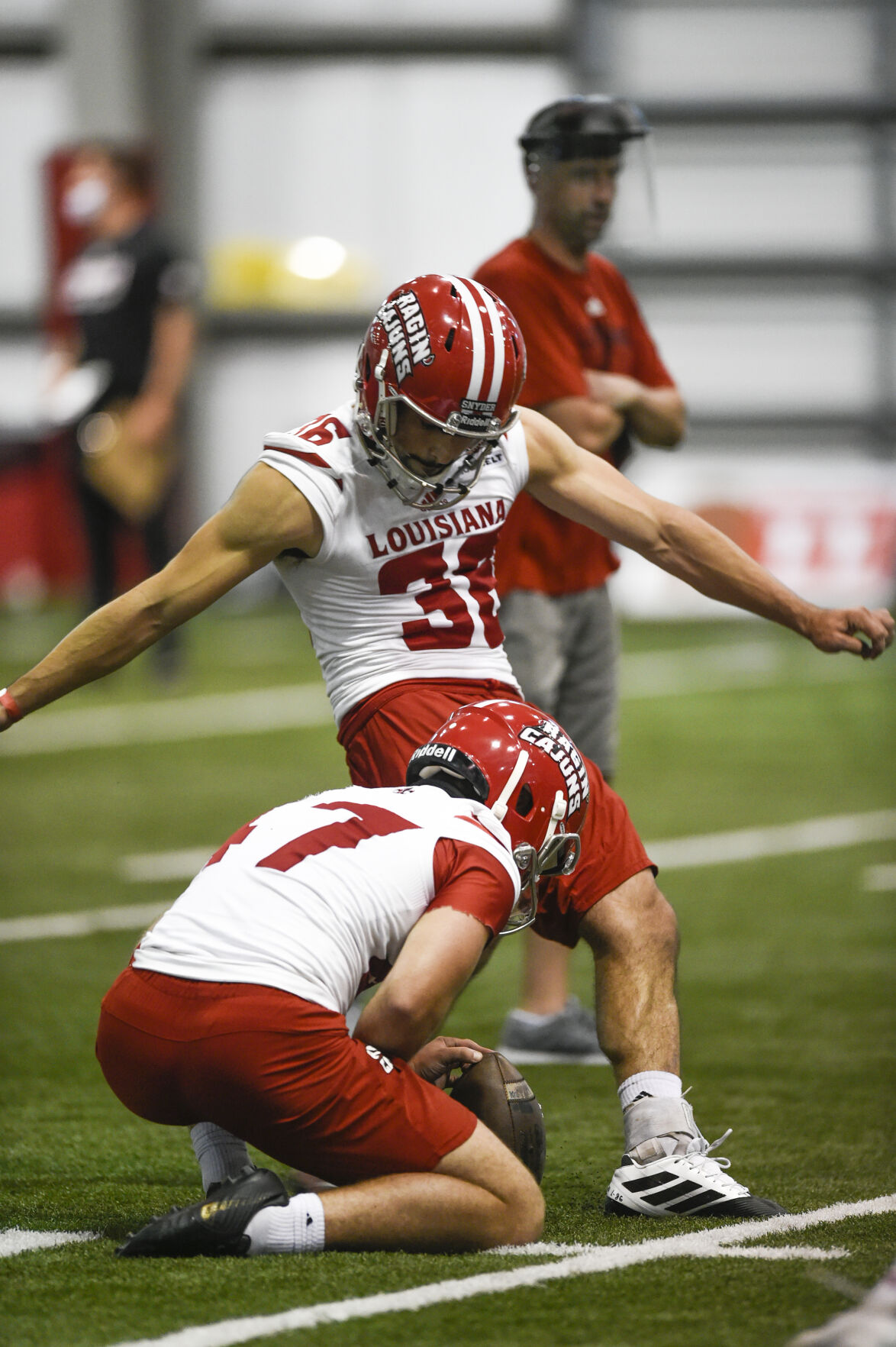 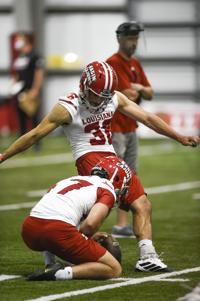 New UL placekicker Nate Snyder (36) kicks out of the hold by Rhys Byrns during fall football practice in preparation for Saturday's season opener at Iowa State. 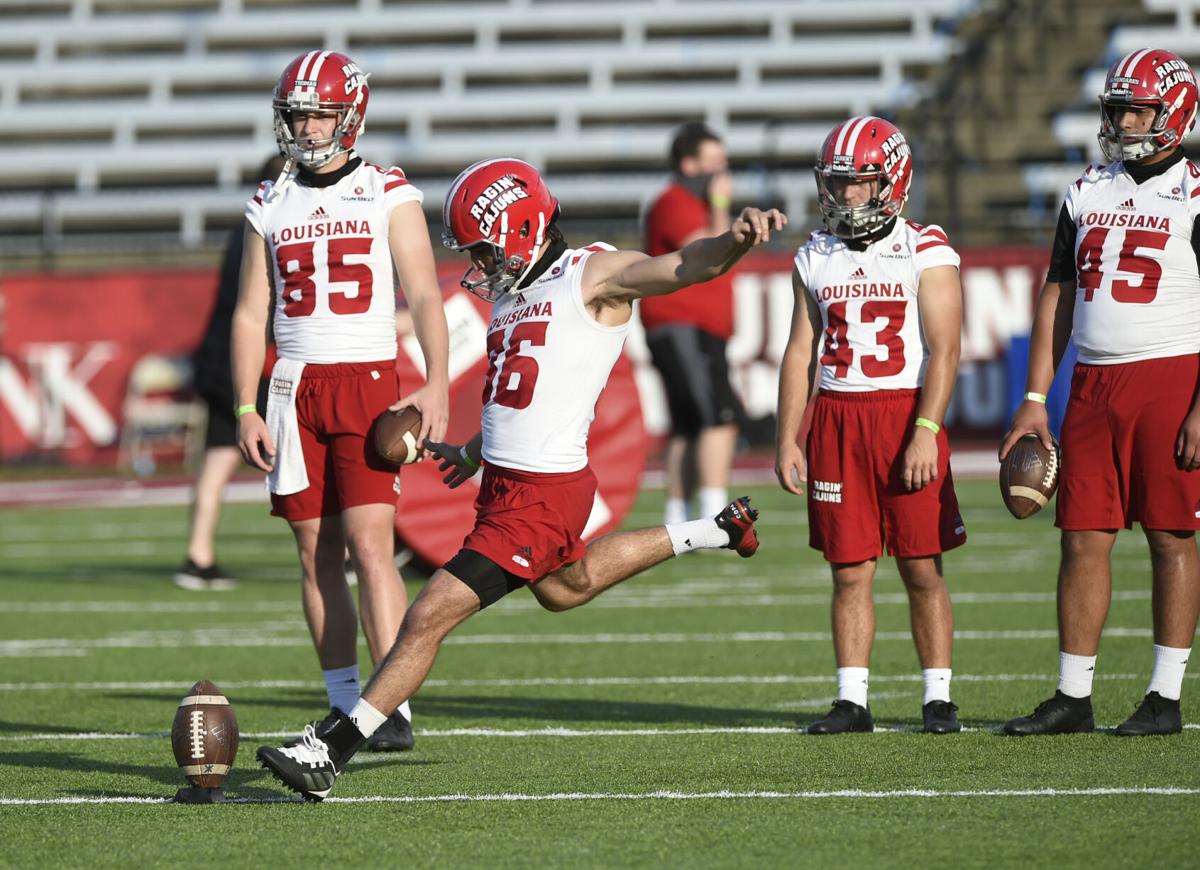 New UL placekicker Nate Snyder (36) kicks out of the hold by Rhys Byrns during fall football practice in preparation for Saturday's season opener at Iowa State.

So when new UL placekicker Nate Snyder opted for a graduate transfer to the Ragin’ Cajuns, living away from home for the first time presented a few challenges.

The coronavirus pandemic didn’t help, either.

Max Mitchell's expectations for Cajuns, offensive line this fall are through the roof

“With the corona stuff, when you’re trying to find an apartment and the leasing offices are closed, that makes it tough for sure,” Snyder laughed.

Once he got settled, though, Snyder couldn’t feel more at home in Lafayette.

“It’s been great since I’ve been down here,” Snyder said. “It’s been exactly what I thought it would be. The people on the team are awesome. I’m already making a lot of friends. The coaches are great.”

“Getting reps with the snappers and holders and having a special teams coach that’s so passionate about the special teams,” Snyder said. “He’s not a guy that does it as a side gig; he’s special teams-minded. It’s made things way easier on me.”

Throughout his career at Indiana, Snyder was exclusively the kickoff specialist. At UL, he’ll be wearing the placekicker hat as well.

Some positions don’t require any guessing or verification from UL coach Billy Napier about who is the starter.

“My confidence is going like this (upward), and it was already in a pretty high spot coming in,” Snyder said. “I’m feeling real good about field goals on top of kickoffs.”

For so many kickers, it’s about overcoming mental obstacles to be consistent.

In Snyder’s mind, pressure doesn’t have to even exist.

“Honestly pressure is kind of made up in your own mind in my opinion,” he said. “You go out there and think, ‘I’ve got to make this 40-yard game-winner.’ Well, it’s really just a 40-yard field goal, whether it’s in the first quarter or the game-winner. It’s the same exact kick.

“So knowing that helps, and then going back and looking in camp and realizing 100% from 40 to 50 yards. That builds your confidence. All that stuff makes me feel good.”

But placekicking success isn’t a one-man job, despite what many fans think.

Sure, the offseason was rough.

Paul Boudreaux is the snapper, but multiple holders have been used in recent weeks, including punter Rhys Byrns, wide receivers Dalen Cambre and Devon Pauley and quarterback Levi Lewis.

The starting holder will be announced later this week when Napier releases the season’s first depth chart.

“We’ve kind of narrowed down who he’s working with, and we’ve improved the fundamentals on that team,” Napier said. “Those guys are a lot better when the people around them are really good and really consistent.”

Needless to say, Snyder is ready to get started. All the offseason distractions are behind him now.

No, he hasn’t attempted a field goal that will go on his career record yet, but Snyder’s pretty positive he’s already nailed his choice of school.

“If you look back over the years, they’ve had good success here,” Snyder said. “They’ve sent people to the NFL here. It’s really a golden opportunity. It had the degree program I wanted to do, it had everything. It was down south.

“Literally everything I would have written on a list that I wanted out of a school, was here. So when they offered me, it was a no-brainer — no questions asked. I didn’t want to go to any other school.”