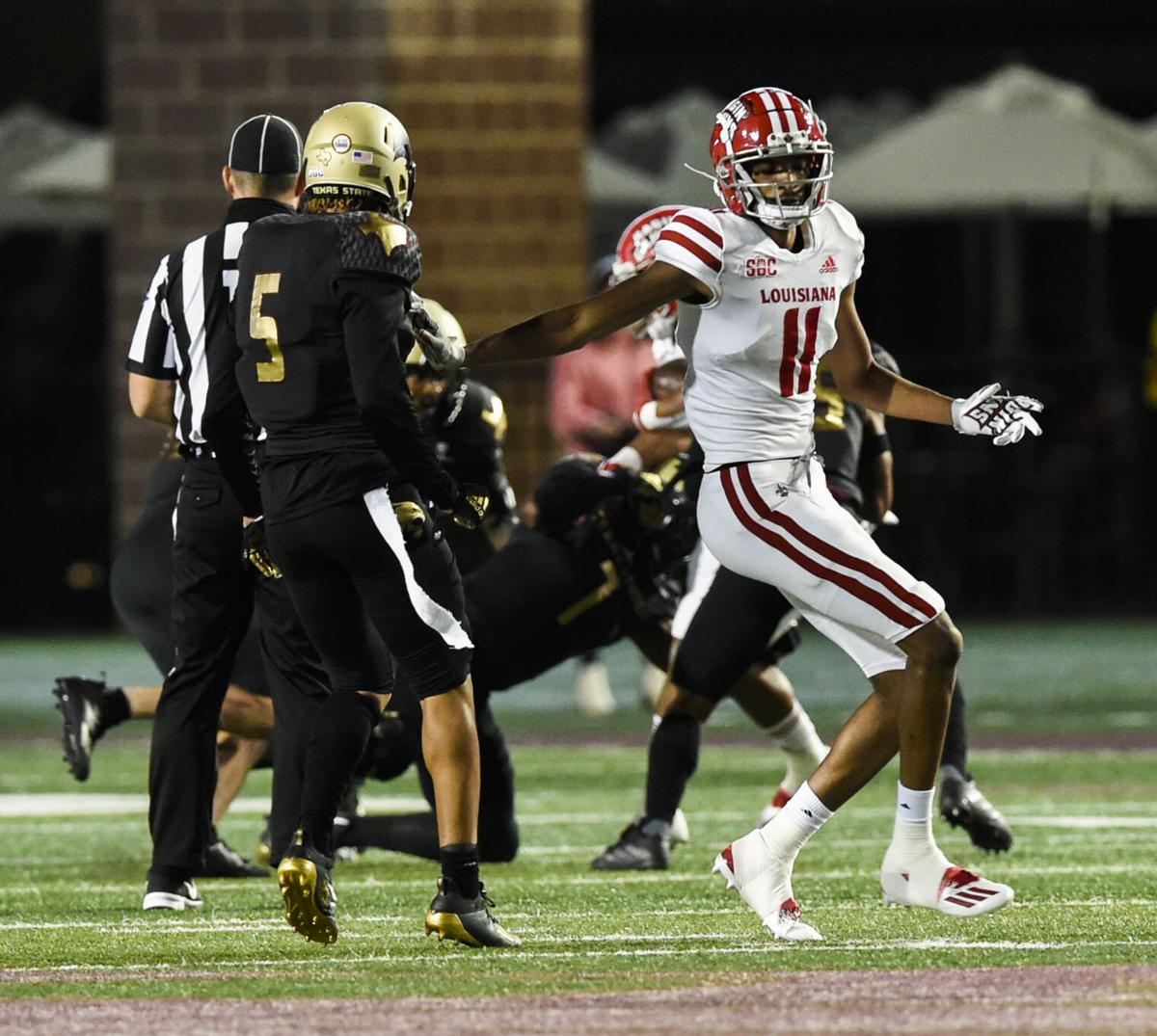 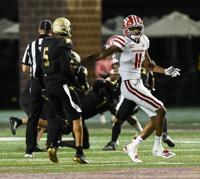 UL wide receiver Calif Gossett (11), shown here during the Cajuns' road win over Texas State where he made his first collegiate TD catch, brings a veteran presence to the receiving corps. 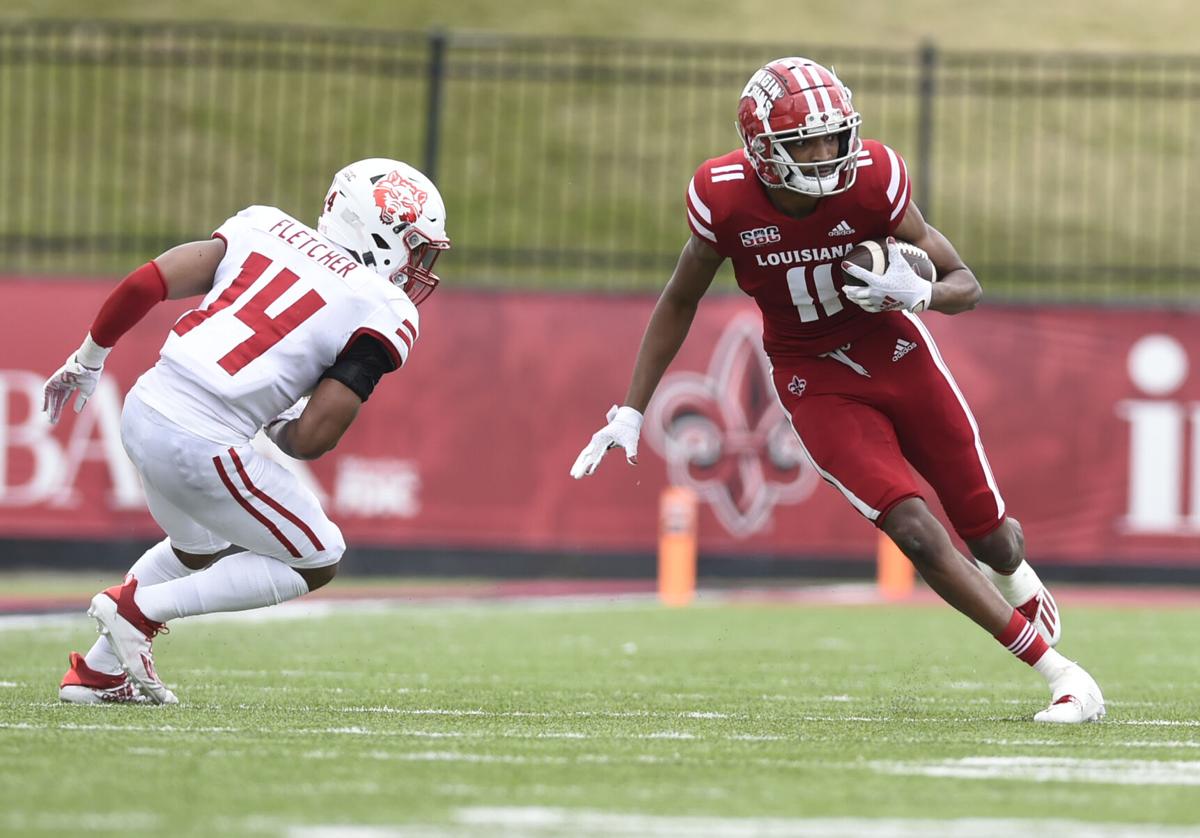 UL wide receiver Calif Gossett (11), shown here making a reception against Arkansas State, has returned quicker from an offseason Achilles tear and hopes to add to the offense's consistency down the stretch.

UL wide receiver Calif Gossett (11), shown here during the Cajuns' road win over Texas State where he made his first collegiate TD catch, brings a veteran presence to the receiving corps.

UL wide receiver Calif Gossett (11), shown here making a reception against Arkansas State, has returned quicker from an offseason Achilles tear and hopes to add to the offense's consistency down the stretch.

UL redshirt junior wide receiver Calif Gossett was home in Pensacola, Florida, working out at his old high school when it happened.

It was just a week after the coronavirus shutdown began in March.

He was trying to stay sharp with one of his former coaches, somehow planted in the wrong spot and “it was over.”

“I knew exactly what happened,” Gossett said of his torn Achilles injury.

“As soon as it happened, I couldn’t put any pressure on it. I heard the pop.”

It’s getting closer to the end of the college football season.

Gossett’s first thought, though, wasn’t about the pain as much as the consequences of the injury.

Instead of the injury costing him his entire season, however, something inside Gossett pushed him to return as soon as possible.

“I was sick to my stomach, but I knew the moment I tore it that I was going to be back for the season,” Gossett said.

Napier suggested initially Gossett might be available for the final four games. Instead, the 6-6, 188-pounder returned for the UAB game Oct. 23.

Foote: Breakthrough win opens many doors for No. 24 Ragin' Cajuns

Clinching a spot in the conference championship game is one thing.

He didn’t make a catch in that game but has pulled in two receptions in each of the next three to establish himself as a option for quarterback Levi Lewis the rest of the way as the No. 24-ranked Ragin’ Cajuns (7-1, 5-1) return to play against Central Arkansas at 1 p.m. Saturday at Cajun Field.

“I was determined,” said Gossett, who has 24 receptions for 319 yards and a touchdown in his career. “I was not going to miss this season.”

In his mind, he said he knew how much he could push his body.

“For me, I was running at like three months,” he said. “I was pushing the envelope. I was pushing everything I could, working through the pain. I was given a protocol, but I just went with my body.

“I know my body more than they could tell me. I just worked to what I felt like I could do. I kept it safe and just progressed as time went on. It definitely healed faster than it should have. I was just trying my hardest to get back.”

Part of the process included work with Lewis whenever possible.

It didn’t take Lewis long to notice the difference when Gossett returned.

He may not have looked like it in Saturday's win, but UL coach Billy Napier said he's pleased with the consistency and stability of the Cajuns…

“He’s a guy that I trust — put it everywhere and he’s going to come down with it,” Lewis said. “A guy that knows the system, knows what he’s supposed to do. I know where he’s going to be. We think alike.

“I know where he’s going to be. We talked a lot in the offseason, and we’re on the same page. It’s always a good feeling to have that receiver that thinks like you.”

That was never more obvious than on UL’s second drive at Texas State on Halloween night when Lewis connected with Gossett on a 46-yard touchdown pass for a 14-0 lead.

This wasn’t just any touchdown. It was his first collegiate score.

“It was a great moment,” Gossett said. “It happened so fast, I didn’t know what to do.

“I felt like that game at Texas State is one I’ll never forget. Coming in, in ’16 and just now scoring my first touchdown. It was very electric. It really made me happy.”

He had overcome shoulder surgery and then Achilles surgery, not to mention all the normal growing pains of being a young man away from home.

“He showed great discipline in the rehab process,” Napier said. “Certainly for him to have to rehab during the pandemic I think was unique, but he did a great job. He’s back earlier than expected. Since he’s gotten back, he’s done a nice job.

“I think we lose sight sometimes of how valuable experience is … having played in some games, having been through the gauntlet, having got his tail chewed going all the way back to Year 1. He’s got thick skin.”

In addition to football, Gossett said he’s learned many life lessons during his time in Lafayette.

“Just making sure I got my ducks in a row,” he said. “Not trying to procrastinate too much. Making sure on time for everything, no matter what it is. … Just sharpening up on things you might have to take outside of football when you get in the real world and have a job and have people relying on you.

“When you have people looking at you, you have to be that example. There’s not much room for mistakes.”

Now that his knowledge of the game and his maturity off the field are at all-time highs, Gossett is excited about what the stretch drive of his career can bring.

“As long as I keep doing what I’m supposed to — coming up here day by day, being locked in and make sure I’m following all the rules, my opportunities will grow,” he said. “I’ve just got to be ready when they come. That’s where the work comes in.

"I have no fear on the field. I’m confident in the work I put in, so I just cut it loose.”