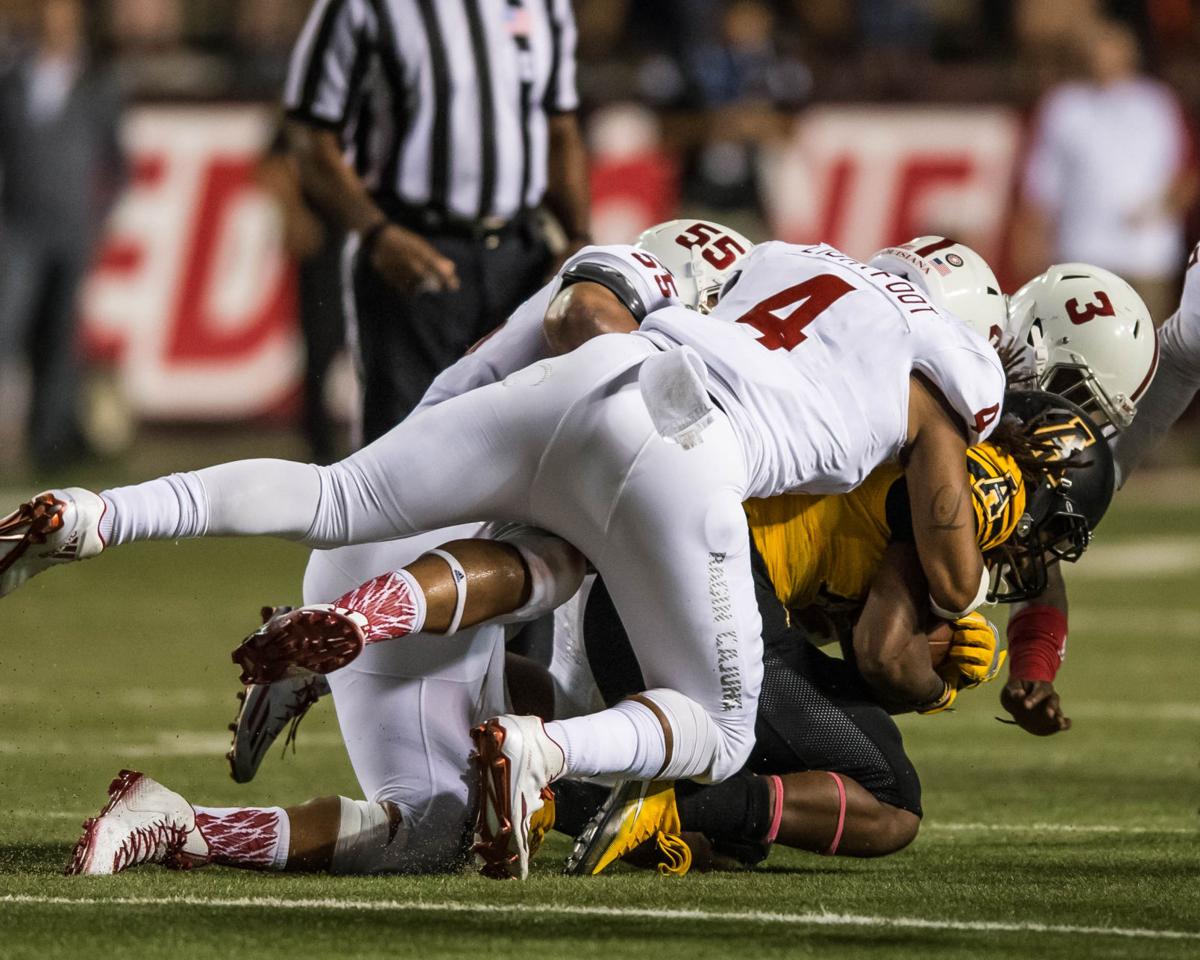 Ragin Cajuns linebacker Tre'maine Lightfoot puts the hit on the Mountaineer running back during the second half as the Cajuns fall to the Mountaineers by a final score of 24-0 on Wednesday night October 12, 2016. 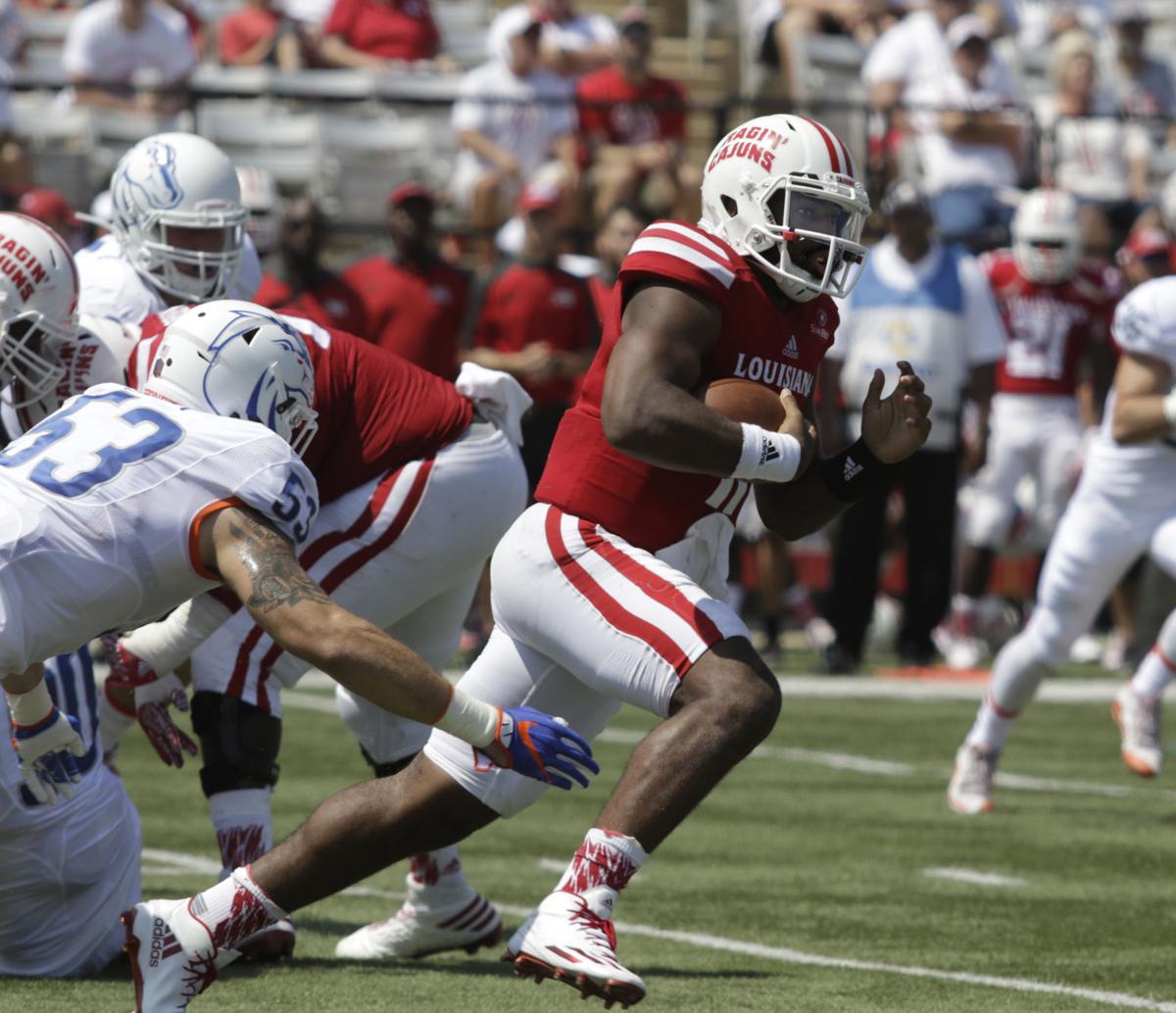 Ragin Cajuns linebacker Tre'maine Lightfoot puts the hit on the Mountaineer running back during the second half as the Cajuns fall to the Mountaineers by a final score of 24-0 on Wednesday night October 12, 2016.

LAFAYETTE — It sounds like a familiar refrain, but Louisiana-Lafayette’s defense will be in for another test Saturday when the Ragin’ Cajuns play another pivotal Sun Belt Conference game.

Funny thing, though: A Ragin' Cajuns defense that was an abomination early in the season has been passing a lot of those tests recently, some of them with flying colors.

Consider this: UL-Lafayette has given up three points in the past six quarters. The Cajuns are in the top 25 nationally in rushing defense. They lead the Sun Belt and are 17th nationally in sacks, and they top the league and are in the nation’s top 10 in tackles for losses.

Four of those sacks and nine minus-yardage tackles came two weeks ago, when UL-Lafayette posted a 27-3 win at Texas State and held the Sun Belt’s No. 4 scoring team to a first-possession field goal. Those numbers bode well for Saturday, when the Cajuns (3-4, 2-2) welcome Idaho (4-4, 2-2) at 4 p.m. for homecoming festivities at Cajun Field.

“We’ve been getting good pressure on the quarterback, and we’ve kept everybody in front of us,” Cajuns coach Mark Hudspeth said. “Early in the year, we weren’t doing that. After the first drive (against Texas State), we had our way the rest of the night, and that was due to guys playing hard on defense.”

Texas State managed only 221 yards and, after its opening field-goal drive, the Bobcats didn’t reach the UL-Lafayette 35-yard line the rest of the game.

Whether that defense can match that effort against a much-improved Vandals team remains to be seen, but there should be no lack of motivation for the hosts. The teams' fifth meeting is a must-win for the Cajuns if they want to stay in the mix for a bowl berth.

Idaho is one win closer to a bowl bid. The Vandals, who went 2-21 in coach Paul Petrino’s first two years, improved to 4-8 overall and 3-5 in the Sun Belt last year — the same records the Cajuns compiled. The teams were also picked tied for fifth in the preseason coaches poll this year.

“Paul’s done a great job of building, and they’re starting to see the fruits of their labor,” Hudspeth said. “Their quarterback can throw it; he spreads it around and takes what you give him. They’ve been good against the run, and they’ve caused a lot of turnovers.”

The quarterback is three-year starter Matt Linehan, son of Dallas Cowboys offensive coordinator (and former Idaho QB) Scott Linehan. Linehan, a junior, has thrown for 1,883 yards with only seven interceptions and leads an offense that is averaging more than 30 points in league play.

The Vandals rank in the top half of the league against the run, two notches behind the Cajuns in fifth, but have struggled against the passing game and have allowed more than 286 passing yards per game.

“It seems like every team they’ve played has been a pass-first team,” Hudspeth said. “That goes a little into those numbers.”

That also means Cajuns quarterback Anthony Jennings could be a major factor. The graduate transfer from LSU had his most efficient game of the season against the Bobcats, completing 18 of 22 passes for 165 yards to complement the Cajuns’ 236-yard rush attack.

“We asked Anthony to manage the game, and he was very efficient in what we asked,” Hudspeth said. “He checked down, threw it away a couple of times and was just solid all night.”

It is a conference game, but there’s no familiarity between the teams. Idaho is in the third year of its second stint as a Sun Belt team — a stint that will end after the 2017 season — but the Vandals and Cajuns didn’t play each other the past two years. The teams haven’t played since 2004, when host Idaho took a 38-25 win in Moscow. UL-Lafayette won the previous two years at Cajun Field.

“They’re going to be a challenge, but we’re hoping we built some momentum with last week’s victory,” Hudspeth said. “We still think our best football is ahead of us, and we saw a glimpse of that last week, especially defensively. It’s a pivotal game for us to get to 4-4, and then build from that.”

Homecoming festivities continue Saturday with a parade at 10 a.m. At halftime, four of the most distinguished athletes and coaches in Cajuns history — tennis standout and longtime Senator John Breaux, All-Star pitcher B.J. Ryan, softball standout Melissa Coronado and basketball coach Beryl Shipley — will be inducted into the school's athletics hall of fame.