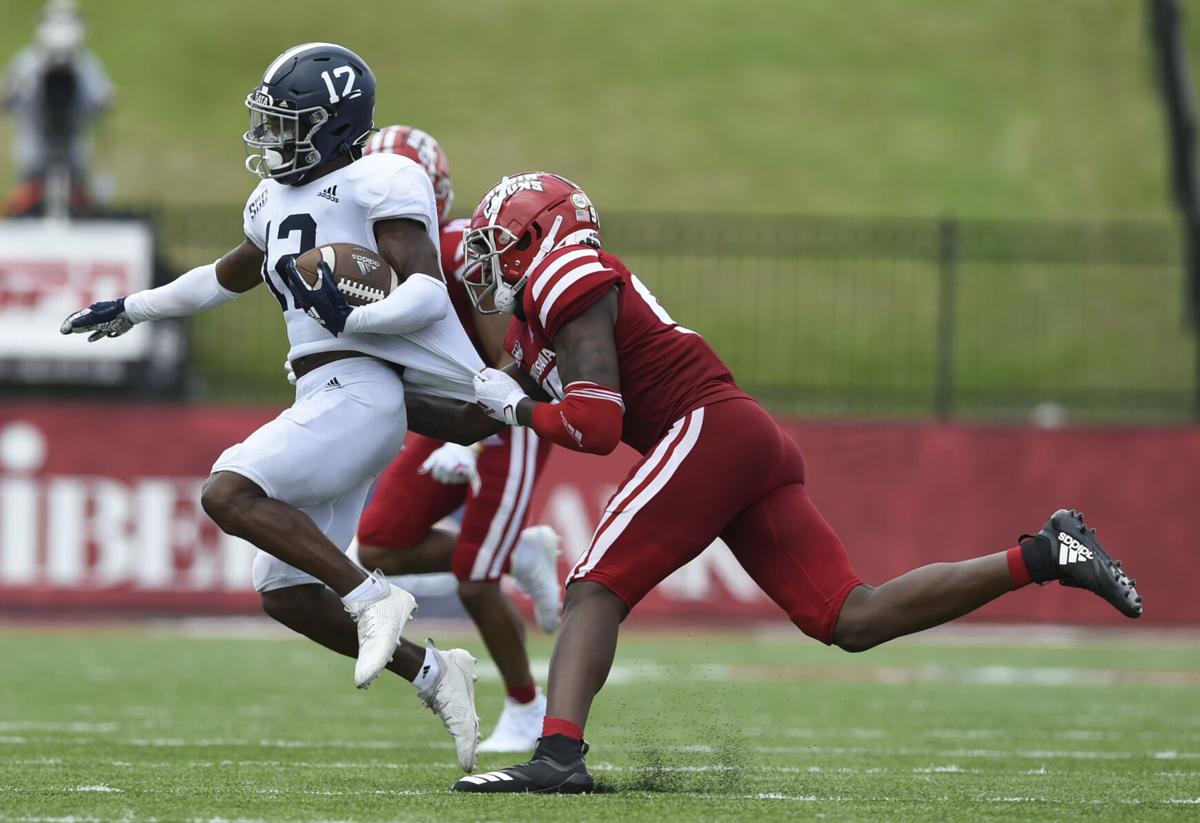 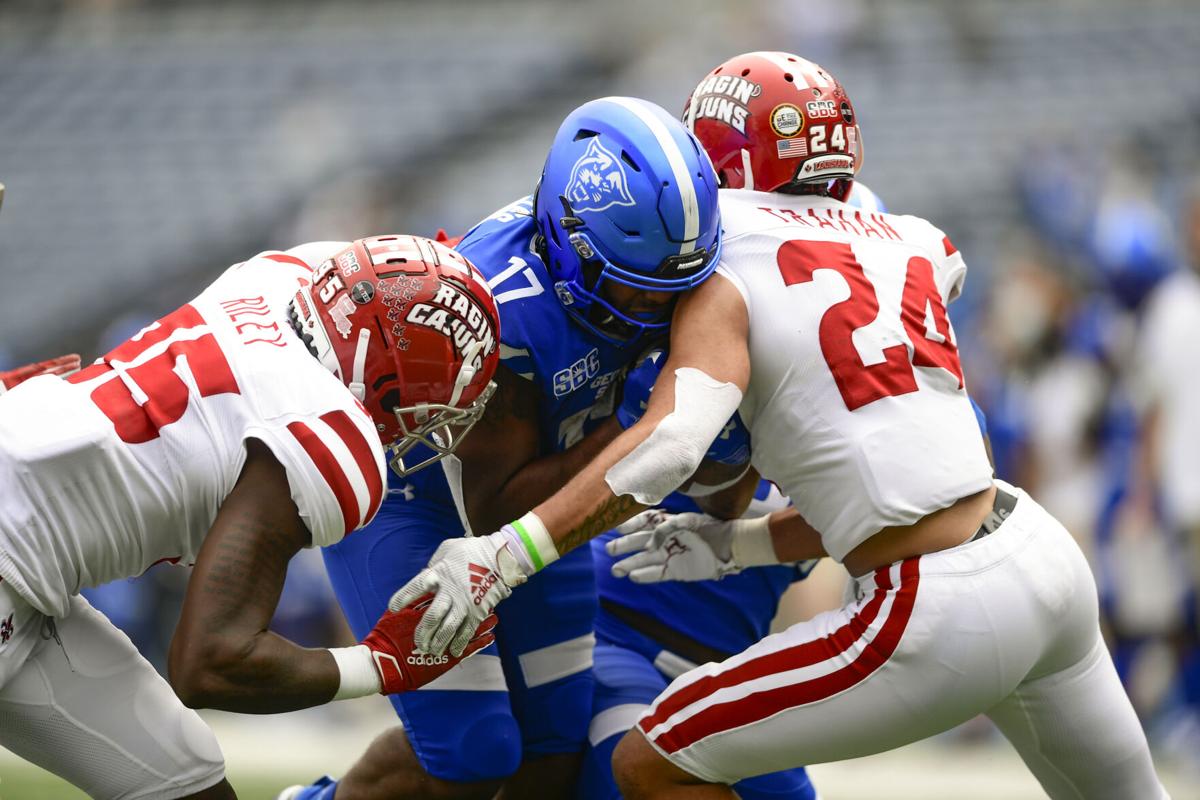 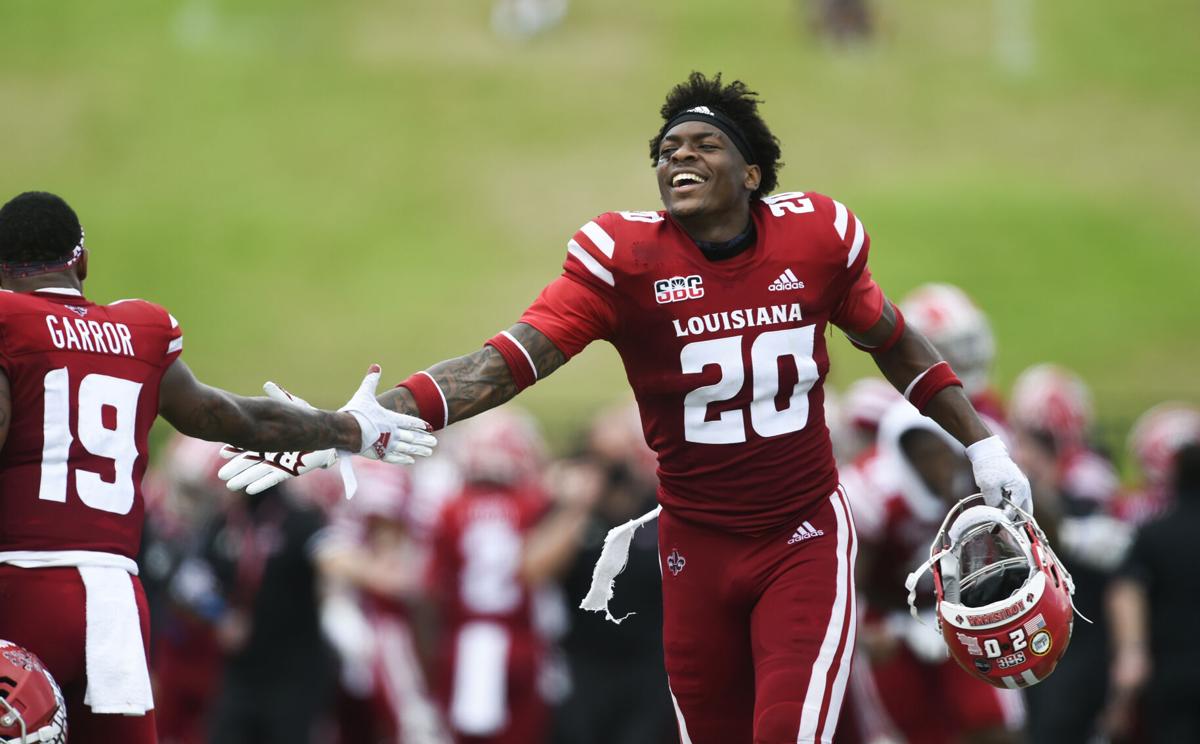 UL cornerback Mekhi Garner (20), shown here celebrating a stop with Eric Garror (19) during the Georgia Southern win, has played a critical role off the bench in the Cajuns' 3-0 start.

UL cornerback Mekhi Garner (20), shown here celebrating a stop with Eric Garror (19) during the Georgia Southern win, has played a critical role off the bench in the Cajuns' 3-0 start.

On the surface, it’s been a banner season so far for the UL Ragin’ Cajuns football team.

First, there was the upset of Iowa State. Now the Cajuns are the only team in Louisiana ranked in the Top 25.

But while the fans celebrate that unique distinction, and the players and coaches do their best to downplay the polls as much as possible to stay focused on the task at hand, there are not-so-unsung heroes out of the general spotlight largely responsible for the 3-0 start.

With so many starters and key contributors not available over the past two games, clutch performances turned in by the likes of linebackers AJ Riley and Tyler Guidry and cornerback Mekhi Garner are a big part of UL’s secret to success in 2020.

Before detailing their exploits, it appears the calvary is coming for Wednesday’s 6:30 p.m. home game against undefeated Coastal Carolina on ESPN, which was first rescheduled to Saturday because the Cajuns' game with Appalachian State was postponed because of coronavirus concerns, then itself postponed because of Hurricane Delta.

The only names of interest on the injury report are defensive linemen Dalvin Hutchinson, Malcolm Rollins and Kendall Wilkerson.

“It’s been a blessing in disguise,” Napier said of his team not playing since Sept. 26. “I don’t want to make slight of the hurricane or what App State was going through from a COVID standpoint. But from a timing standpoint, we were a little banged up from a football perspective, and then we did have a handful of players that were out doing contact tracing.”

Getting through the overtime win over Georgia State and the last-play home thriller against Georgia Southern, however, wouldn't have been possible without these reserves stepping up in a big way.

Don't be surprised if the trio continues to get playing time throughout the season.

He hasn’t played since, presumably because of COVID-19 testing.

With Hurricane Delta's expected arrival in the area Saturday, UL's home meeting with Coastal Carolina has been postponed to Wednesday, Oct. 14.

Garner has emerged as a true diamond in the rough. At least that’s how the coaching staff wanted the outside world to perceive it.

“That’s why we don’t let you (reporters) come to practice,” Napier laughed. “We’re so proud of Mekhi. He played four games last year and then had to have a sports hernia surgery in the offseason. It was kind of a little bit of a journey to get him back to full speed. When AJ (Washington) obviously was out, he had to step up.”

Napier said UL “found Mekhi in the middle of the summer (of 2019)” as a junior-college qualifier, and he joined the team immediately.

The 6-foot-2, 212-pounder has played steady with seven tackles and an interception.

“We think he is a steal,” Napier said. “He’s got lots of room for improvement from a consistency dependable standpoint, but man, he’s talented. I know (cornerbacks) coach (LaMar) Morgan has done a really good job with him in terms of maturity as a person and as a competitor. I knew technically he’s really taken a step forward.”

And in Garner’s mind, he’s just getting started.

“I don’t feel like I’ve touched my true potential yet, so I’m still working every week,” Garner said. “I just know that I need to show up every week. I’m no where near my true potential, so every week I’ve got to come with it. This week is more me being tired. I’m taking more plays now, so I feel like I have to get in true shape to get out there and play every down.”

Meanwhile at linebacker, such playmakers as Dillon, Manac and Moncrief have been out.

So far, it’s been sophomore Guidry and redshirt freshman Riley to the rescue.

“A.J. Riley and Tyler Guidry individually have impressed me,” Napier said. “They really stepped up and played well when we were without Joe (Dillon) and Chauncey (Manac) there. I think those guys have done a good job.”

With so many of the regular names back on the depth chart released Sunday evening, the most intriguing change is Mat Mitchell listed as a ‘OR’ starter at left tackle along with Zach Robertson.

“I think we’ve got a depth chart,” Napier said. “We’ve got a plan in terms of how we’re going to play the players in the game. That’s relative to who’s available, who’s healthy — a lot of things contribute to that. That’s where we’re at. It’s a product of that more than maybe what we want to do long term. We’re just trying to position the players and do what’s in the best interest of the team each week.”

It’s good to have depth like Riley, Guidry and Garner on your roster.

Cajuns hoping to be rested, not rusty, when they take on undefeated Coastal Carolina on ESPN Wednesday

For the first time since a 20-18 come-from-behind win over Georgia Southern at the buzzer on Sept. 26, the No. 21-ranked UL Ragin’ Cajuns will…