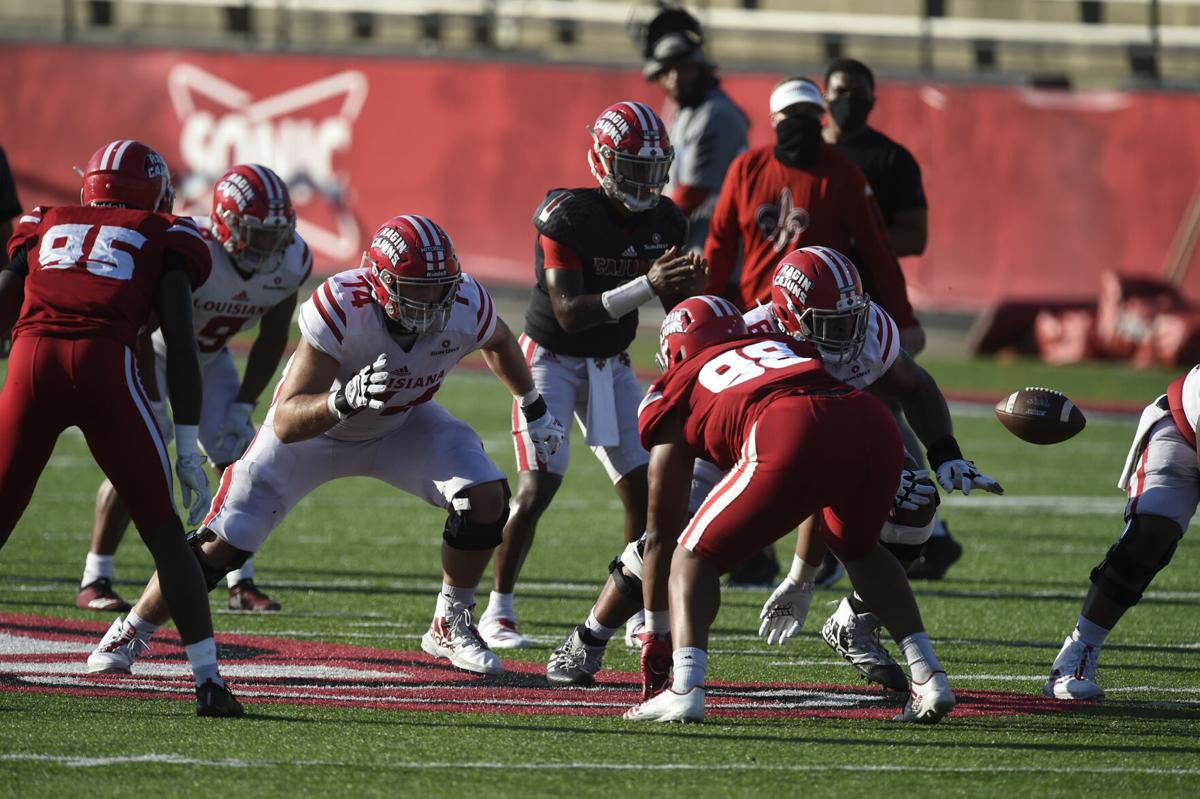 UL junior right tackle Max Mitchell (74), shown here during a fall practice drill, is convinced the Ragin' Cajuns' offensive line will be even better in 2020. 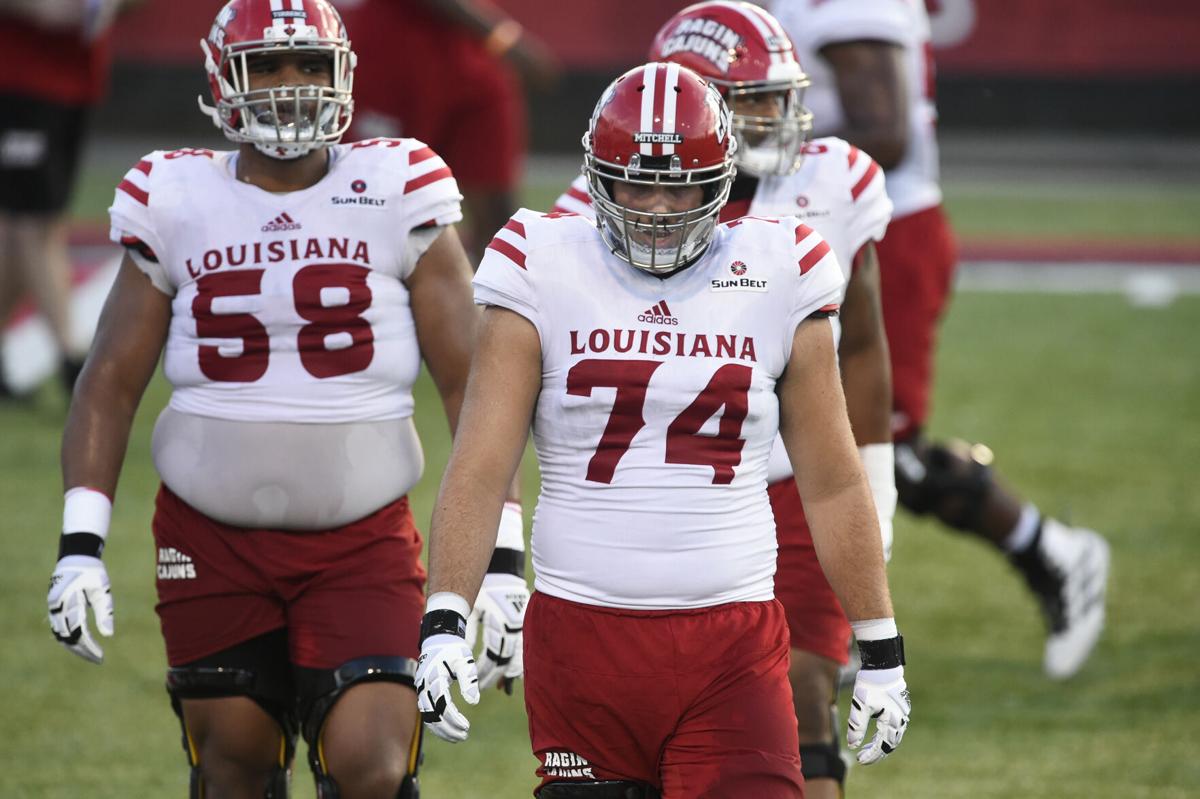 UL junior right tackle Max Mitchell (74), shown here during a fall practice drill, is convinced the Ragin' Cajuns' offensive line will be even better in 2020.

Ask him about his expectations and he doesn’t believe in setting the bar low.

As for the Ragin’ Cajuns overall, Mitchell isn’t ready to accept a loss going into any matchup this fall.

“As long as we stick with our game plan, I think we’re going to be just fine through this season,” the 6-foot-6, 297-pound Mitchell said. “We can do whatever we want, as long as we keep our heads right and our eyes set on the right thing. I absolutely believe whatever we want."

Sure, the offseason was rough.

In fact, Mitchell views that game as a prime opportunity for UL’s offensive line to impress the Joe Moore Award voters.

The panel recognizes the nation’s top offensive line each year. The Cajuns were one of 24 teams nationally to make the midseason honor roll list for the award last season. Alabama, LSU, Ohio State and Oregon were the final four and the Tigers won the award.

“Last year, we were on the Joe Moore watch list — speaking of the O-line,” Mitchell said. “We should have finished that year out a little better, but I think this could make a statement that we really are a nationally-regarded O-line … prove to bigger schools, power five schools that we’re a part of this and we can win this award.”

Even entertaining discussions about going unbeaten as a team or an offensive line competing for the top honor in the nation requires a unique confidence level for a group of five program.

In Mitchell’s mind that approach began with the work put in over the summer.

Cajuns still have no positive tests; undaunted by recent breakout in Ames, Iowa

“We showed up every morning looking forward to playing,” Mitchell said. “Even though it was up in the air, we came in every day like we were expecting to play McNeese (in season opener). Coach (Billy) Napier, coach (Rob) Sale and all the other position coaches did a good job of keeping us focused.

“We put in this hard work, we’re excited. This year, we’re ready to go. I don’t know how to explain it other than we’re practicing hard and we’re excited to show what we’ve got.”

That focus has also been illustrated by UL enduring zero positive tests during training camp.

“We’ve been one of the few teams that have been able to practice throughout this whole time,” Mitchell said. “The team has done a great job of staying out of trouble. I think we’ve done a great job.”

It also comes from the lessons learned a year ago and his colleagues returning on the offensive line.

Sure, the unit lost right tackle Robert Hunt to the Miami Dolphins in the second round and right guard Kevin Dotson to the Pittsburgh Steelers in the fourth round.

But again, this is Max Mitchell. His expectations are for the offensive line to be even better this fall.

“Absolutely,” Mitchell said. “I think with the help of Cole Prudhomme and Ken Marks coming back for a sixth year, they have so much leadership experience. I think they know how to guide an O-line like that and keep everybody together.”

Then comes Mitchell himself.

The Neville High product feels more comfortable these days than he did for much of UL’s record-breaking 11-3 season a year ago.

Midway through last season, Hunt went down with a season-ending injury and Mitchell was immediately moved to right tackle.

At first, it felt a bit awkward.

“They just stuck me there after Robert’s injury last year,” Mitchell said. “It didn’t feel very natural at first, but coach Sale after a few reps here and there said, ‘You look more natural on the right side. We’re going to keep you there. I think you look great there.’

“I’ve just adjusted over time to it.”

So in effect, Mitchell joins sophomore O’Cyrus Torrence on the right side, replacing Dotson and Hunt.

“Me and O’Cyrus (Torrence) coming back (on right side), we have experience last year playing together,” Mitchell said. “I think it’s just a chemistry deal. I think we have a ton of talent. The guys who were redshirted last year that did play saw how to do it. I think we’re just coming together as a unit.”

It also helps Mitchell to know the individual improvement he knows he’s made in his game.

“I think my pass game was improved,” he said. “I still have a lot to work on there. I feel like I got stronger in the spring. I feel like my run game improved. My freshman year, I was kind of like a wet noodle out there, but I’ve managed to get stronger and bigger and a little more mass on me.”

“Max Mitchell is primed to have a breakout year,” Napier said. “I think he played really well last year.”

Furthermore, the offensive line became even closer and stronger while leaning on each other after the tragic loss of offensive line coach D.J. Looney during a team workout on Aug. 1.

“That was a tough part of this year – probably one of the toughest,” Mitchell said. “We’re so close on the O-line. We have a lot of returners. We spend a lot of time with him. Leaning on each other has helped a lot. We’re using him for motivation – all the things he (Looney) taught us, we’re just carrying it forward.”