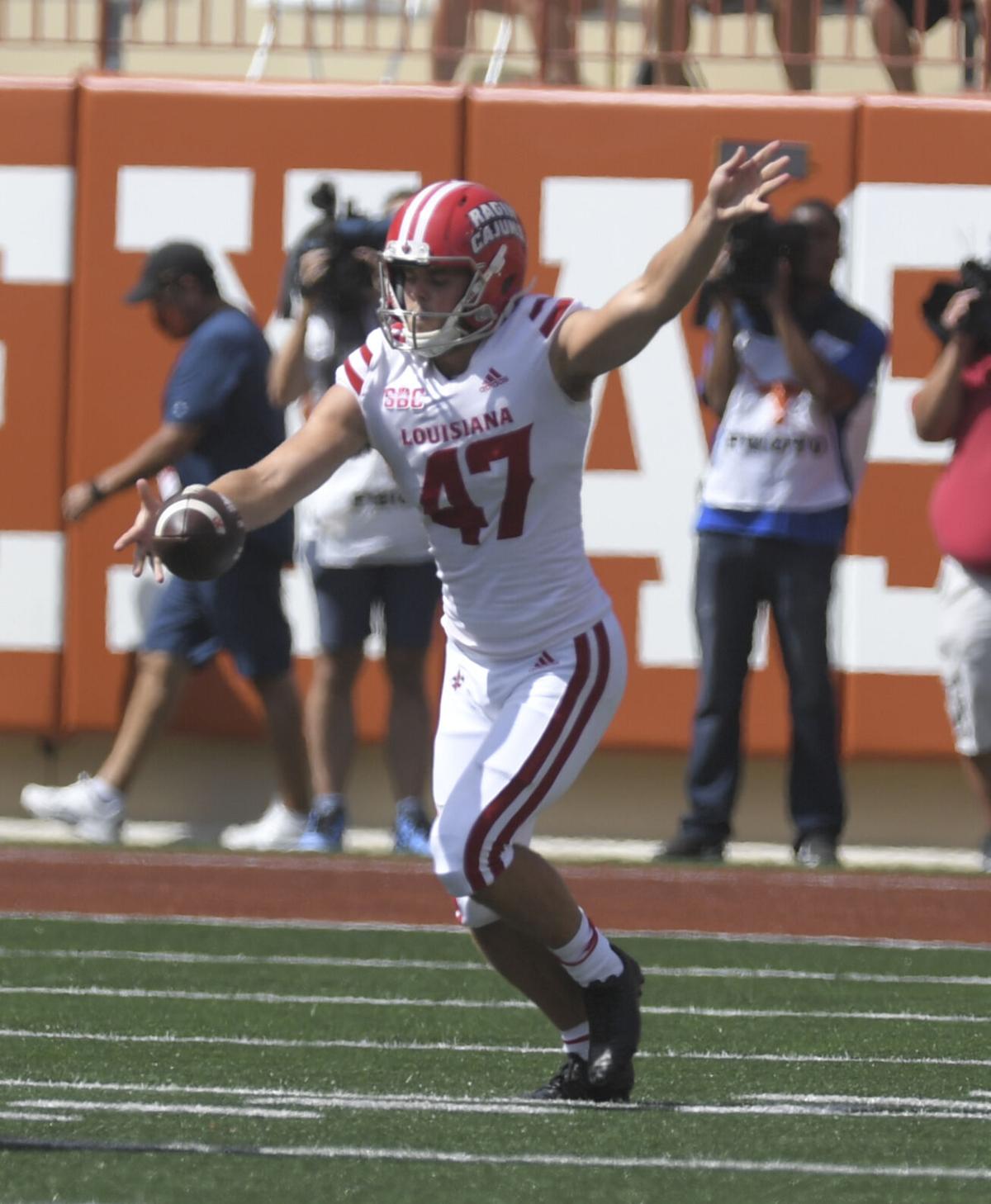 UL punter Rhys Byrns (47) enjoyed a good start to the 2021 season by averaging 53 yards a punt in Saturday's loss to Texas. 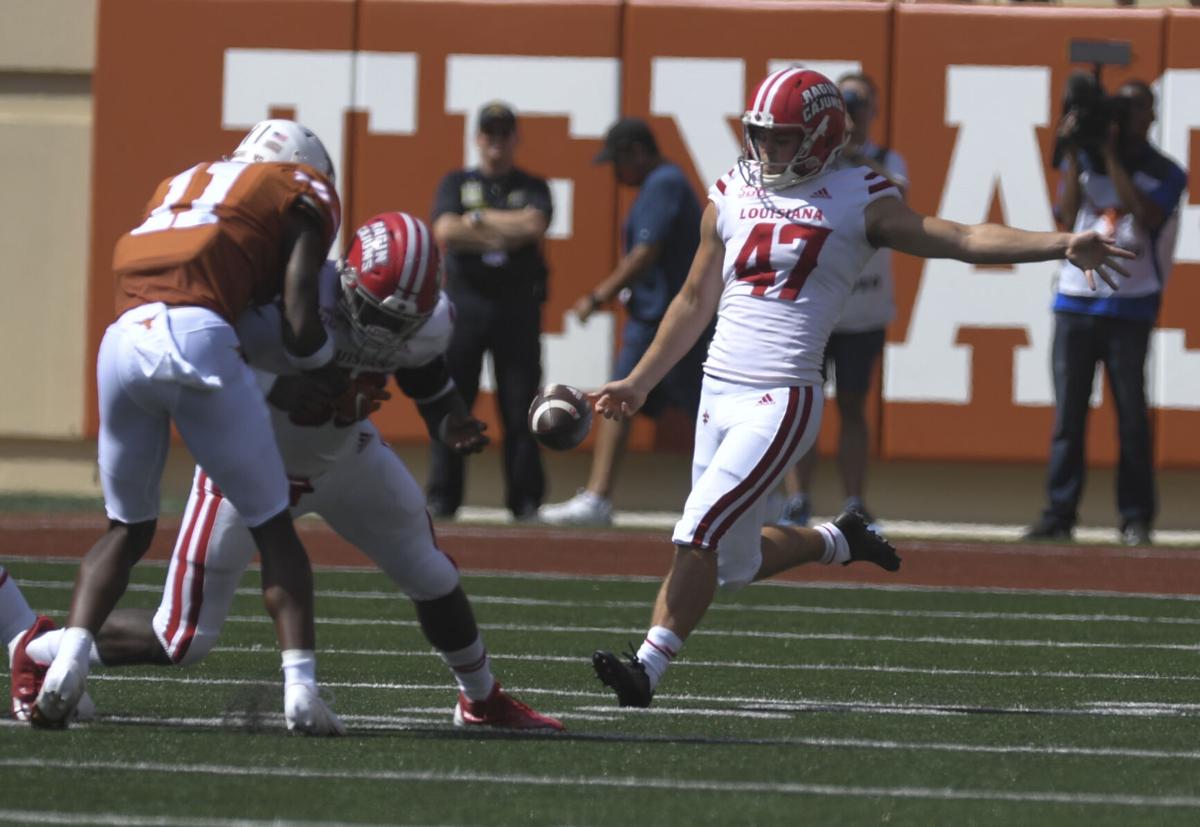 UL punter Rhys Byrns (47) said his parents back in Australia are now diehard Ragin' Cajuns fans, despite having zero knowledge of American football when he joined the program four years ago.

UL punter Rhys Byrns (47) enjoyed a good start to the 2021 season by averaging 53 yards a punt in Saturday's loss to Texas.

UL punter Rhys Byrns (47) said his parents back in Australia are now diehard Ragin' Cajuns fans, despite having zero knowledge of American football when he joined the program four years ago.

There are several areas that need addressing after UL’s 38-18 road loss to the Texas Longhorns this past Saturday.

One of them isn’t junior punter Rhys Byrns.

In his fourth season as the Ragin’ Cajuns’ punter, the native of Rye, Australia, continued to shine against Texas. He punted the ball four times for an average of 53 yards per punt with a long of 62 and two resting into the 20.

It was an encouraging start to what Byrns expects to be his best season yet.

All of that productivity despite living a half a world away from his family and not being able to return in almost two years because of the pandemic.

“So hopefully this Christmas, if everything opens up, I can get back home,” Byrns said.

His family hasn’t been able to visit him either.

“It’s definitely hard,” Byrns said. “Your whole family and all the friends you knew growing up are all back home and you haven’t seen them in a while. Technology makes it a lot easier with FaceTime and all those sorts of things, but yeah, I miss them every day.

“I’m just trying to do the best I can do, play well and get my degree. I know they’re happy for me and I know I’ll be back soon. Time flies, so I’ll be back over there.”

Byrns' family and friends also keep ties with him and the Cajuns on television or computer.

Foote: Plenty of areas for Cajuns to improve upon after humbling loss at Texas

“They love it,” Byrns said of his friends. “My friends are really supportive. They all watch American football, more so NFL than college, but they still watch games when we’re on ESPN over there.”

In fact, his family has gotten pretty proficient at being UL fans.

“Yeah, 100 percent,” Byrns said. “They know a lot now. My first year, they had no idea what was going on. They would just watch and hope to see me out there. They didn’t understand fourth down or how that worked.

“Now they understand the rules and are diehard Cajuns fans. They’re really supportive and just love the game. They know all the players' names. They love it.”

So much so in fact that they no longer look as forward to seeing Byrns run onto the field, because that means the Cajuns’ offense failed on third down.

“It’s bittersweet when I come out there,” Byrns laughed. “My dad especially loves Levi. I think he’s a bigger Levi supporter than he is me.”

Like his family, Byrns’ knowledge of the game has grown over the years. Originally, his dream was to play Australian rules football. American football was indeed foreign to him initially.

“When I first started out, I actually wanted to be a wide receiver,” Byrns said. “I loved Calvin Johnson. Once I realized how quick and how tall these guys are over here, I figured I might as well start punting the ball.”

Byrns is hoping to one day delight his family with trick play for a first down, or maybe something even bigger.

“I’ve been looking for that ever since I got here, so hopefully it gets called,” Byrns said. “You never know. If it does, I’ll definitely be ready for it.

“It can get a bit boring punting it every time, so hopefully they’ll throw one in there.”

In fact, they met on the plane to America without even knowing each other.

“I speak to her a little bit,” Byrns said. “Actually when I was on the plane over here, she was on the same plane wearing a Ragin’ Cajuns hoodie. So I went up and spoke to her. I didn’t know she was on the softball team.

“That was pretty funny. She really likes it. She’s obviously a great pitcher. I wouldn’t want to face her.”

Cajuns unable to make second-half adjustments; other takeaways from UL's loss to Texas

“I love cricket," he said. It’s very hard to play over here. I’ve tried picking up baseball. It’s a bit of a different swing. I’m not too good at it.”

The other reason Byrns is so confident is all the familiar faces back this season on the punt team. The only new face is new snapper Bobby Hill and he said that transition was an easy one.

“We’ve got the same shield, so that’s massive,” Byrns said. “Those guys have both played a whole year and they understand exactly what to do and how I like to move around back there.

“Our punt team is pretty much identical to last year, without (snapper) Paul (Boudreaux). So that’s massive for us. Everyone’s so experienced.”

Foote: Finding a No. 1 receiver may be more important than some think

UL coach Billy Napier certainly isn’t opposed to the concept of having a clear-cut No. 1 target at wide receiver.