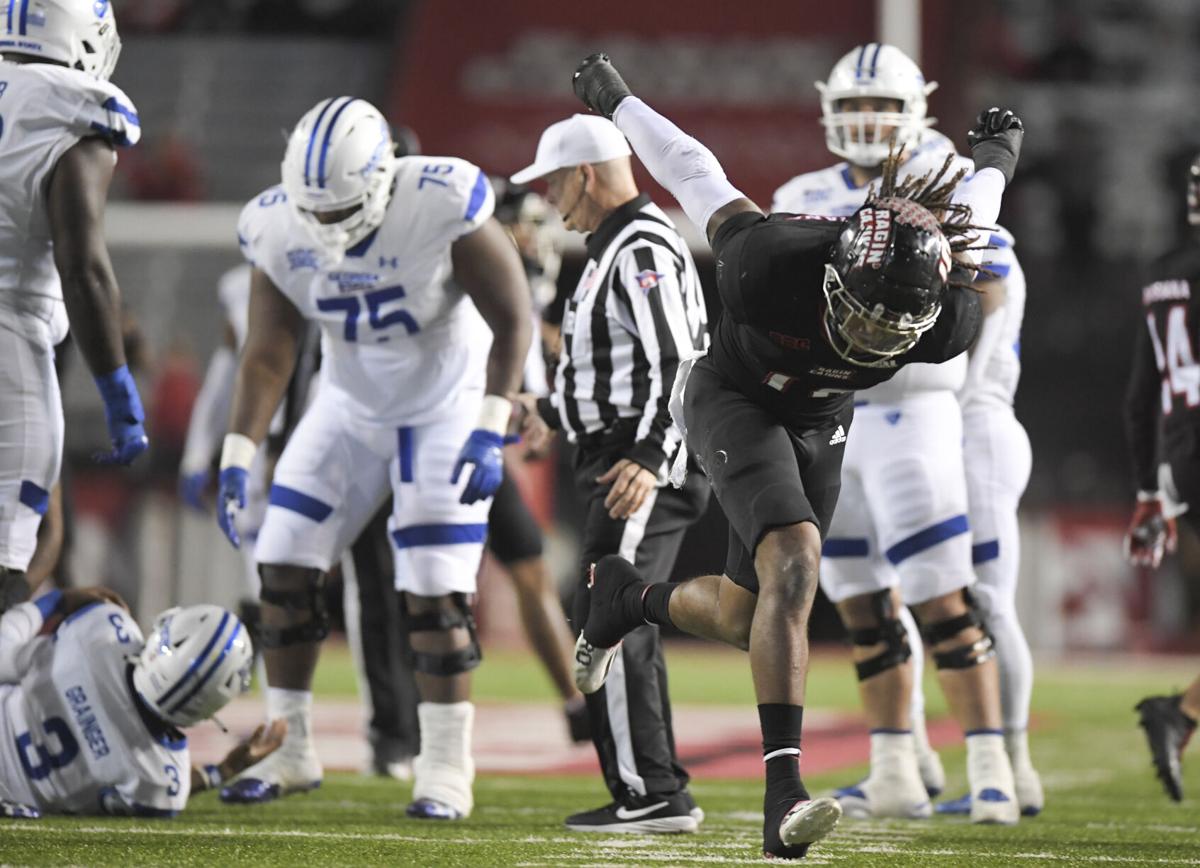 UL defensive lineman Andre Jones (10), shown here celebrating a sack against Georgia State, might have improved more as a player over the past three seasons than any play on the Cajuns' roster, according to coach Billy Napier. 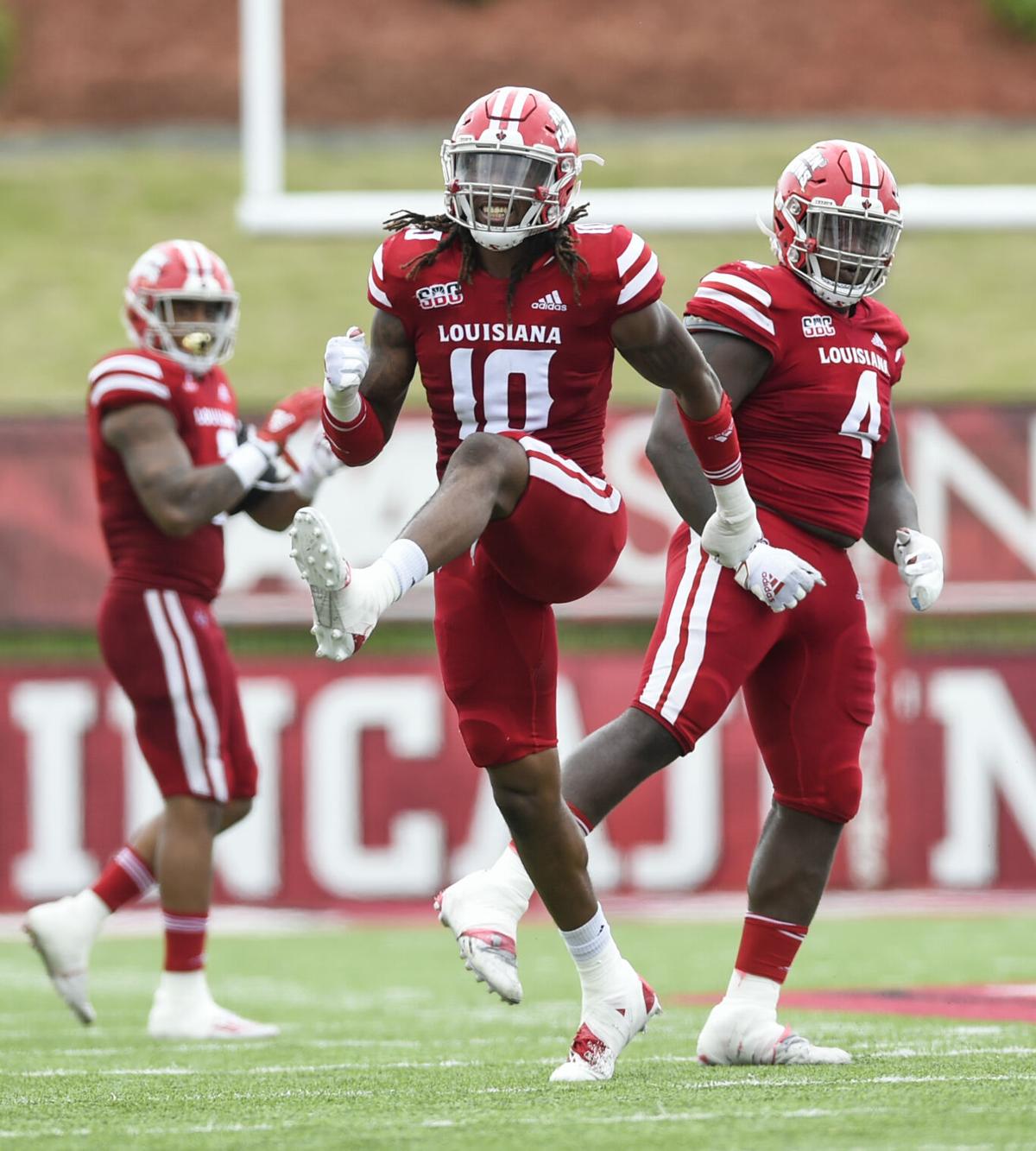 UL defensive lineman Andre Jones (10), shown here celebrating a sack, could be the best example of a developmental success story on the Ragin' Cajuns roster.

UL defensive lineman Andre Jones (10), shown here celebrating a sack against Georgia State, might have improved more as a player over the past three seasons than any play on the Cajuns' roster, according to coach Billy Napier.

UL defensive lineman Andre Jones (10), shown here celebrating a sack, could be the best example of a developmental success story on the Ragin' Cajuns roster.

Others are relatively unknown commodities who played at small, rural schools without much fanfare.

Those prospects fall under the “developmental” category for coaching staffs and often bring the most joy to a college coach.

Perhaps the best example of that scenario for the No. 21 UL Ragin’ Cajuns is redshirt junior defensive end Andre Jones.

The time the UL Ragin' Cajuns put into a certain area of the passing game over the offseason is paying off now.

“I think Andre Jones is a very underrated player,” UL coach Billy Napier said. “He should get more credit.”

Napier’s assertion comes from knowing the road Jones has traveled during his UL career.

Recruited out of Class 1A Varnado by the previous staff, Jones was not close to making an impact when Napier arrived prior to the 2018 season.

“When we first got here, this guy couldn’t even get on the field,” Napier said. “He was a non-factor in year one … absolute non-factor.”

Deep down, Jones knew that as well. He didn't make excuses or point fingers at others. Instead, he decided to do something about it.

Plans have already begun for UL’s participation in the Sun Belt Conference championship game at 2:30 p.m. on Saturday, Dec. 4 at Cajun Field.

His problem was learning the playbook.

After relying on his natural athletic ability through high school, comprehending a college playbook was the furthest thing from his mind as a freshman. During his recruiting trips, he was informed about a lot of things. Nothing about having to memorize a playbook was mentioned.

If he was going to make something of himself at the college level, changes had to be made.

On Saturday in Alabama, the No. 22-ranked UL Ragin’ Cajuns wrapped up home-field advantage for the Sun Belt Conference championship game on Dec. 4.

“When I came back at the beginning of 2019, every day I was getting that playbook down,” Jones said. “Even when we didn’t have meetings, I was watching film getting it down pat. Basically, I held myself accountable.

“Once I stopped holding myself back, I got comfortable with it. You know the plays, you’re going to play fast. You know what’s coming, you play even faster.”

By 2020, Jones was starting every game for the Cajuns. This season, he has contributed 43 tackles, 5.5 stops behind the line, 3.5 sacks and four quarterback hurries as a standout on UL’s defensive line.

“We moved him to that defensive end position and started working with coach (Rory) Segrest, and he’s really made himself into a heck of a player,” Napier said. “I couldn’t be more proud of the guy relative to development.

“You talk about development, this guy might be one of the best examples of strength and conditioning, nutrition, mindset, fundamentals, the intangibles that’s required to play on the line of scrimmage. I love Andre Jones.”

The 6-foot-5, 240-pounder isn’t shy about expressing gratitude for the impact others have had on his success.

For starters, there was some advice from his father Gerald about working hard to better yourself that inspired him along the way.

Then there were a handful of graduate assistant coaches who helped him learn the playbook.

Foote: Composed Cajuns set the stage for what they hope is a rowdy home crowd on Dec. 4

Only moments after his No. 22-ranked UL Ragin’ Cajuns secured homefield advantage in the Sun Belt Conference championship game following a 35-…

“They used to encourage me,” Jones said. “By them encouraging me ... it made me want to learn more. You’ve got to want more for yourself.”

The next level came from his position coach Segrest.

“He got my footwork right, he got a lot of things right. I’ve got to give him props. He brought me a long way.”

Then there's his colleagues on the defensive front, such as Tayland Humphrey and Zi’Yon Hill.

“We do feed off each other,” Jones said. “We’ve been around each other for so long, we all know what we’re supposed to do. We just look at each other and give that look, ‘Hey, it’s time to handle business.’

In so many ways, Napier sees Jones as a shining example of what his program is all about.

“He makes a lot of effort plays,” Napier said. “I respect the guy because of his work ethic, his practice habits … just overall, the guy’s a tough dude. He’s absolutely what we’re about. He’s come a long way.”

UL's defense stepped up in clutch without its leading tackler

The Troy Trojans had more first downs 22-19 and actually outgained the No. 24-ranked UL Ragin’ Cajuns 391-370 and yet lost by two touchdowns i…

Ever had a huge work project that took two, three, maybe even four years to complete? How much work gets done the week after it finally was ac…