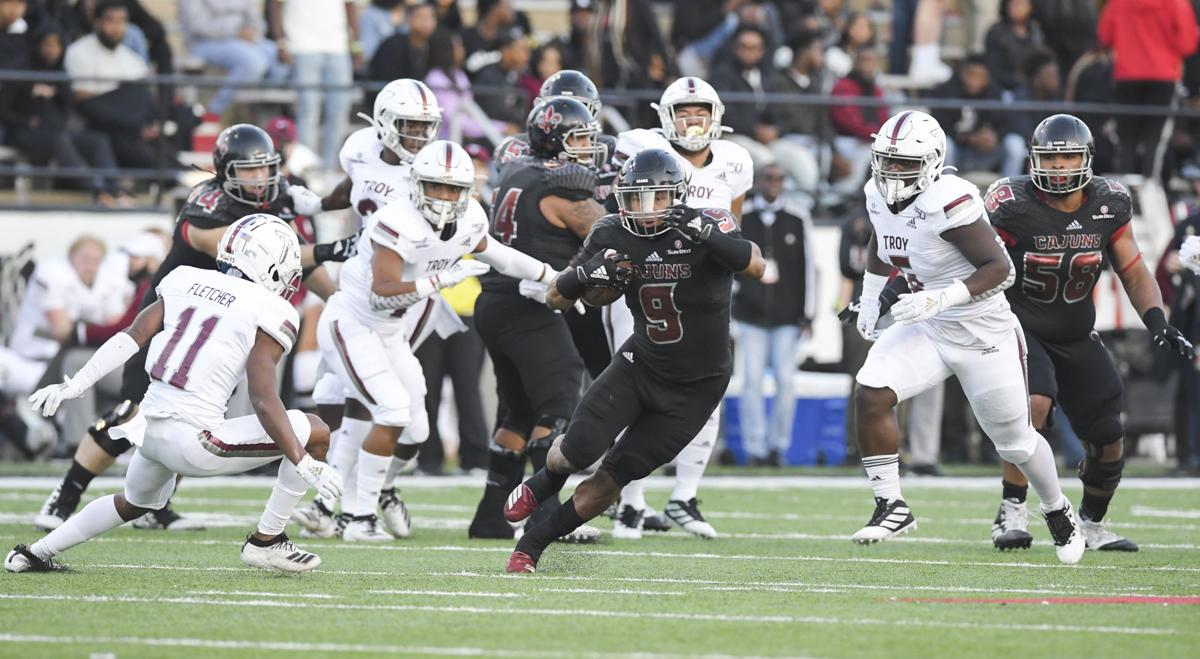 UL running back Trey ragas (9) breaks through the Troy defensive line for a long gain during their Sun Belt Conference football game at Cajun Field on Saturday, November 23, 2019 in Lafayette, La.. 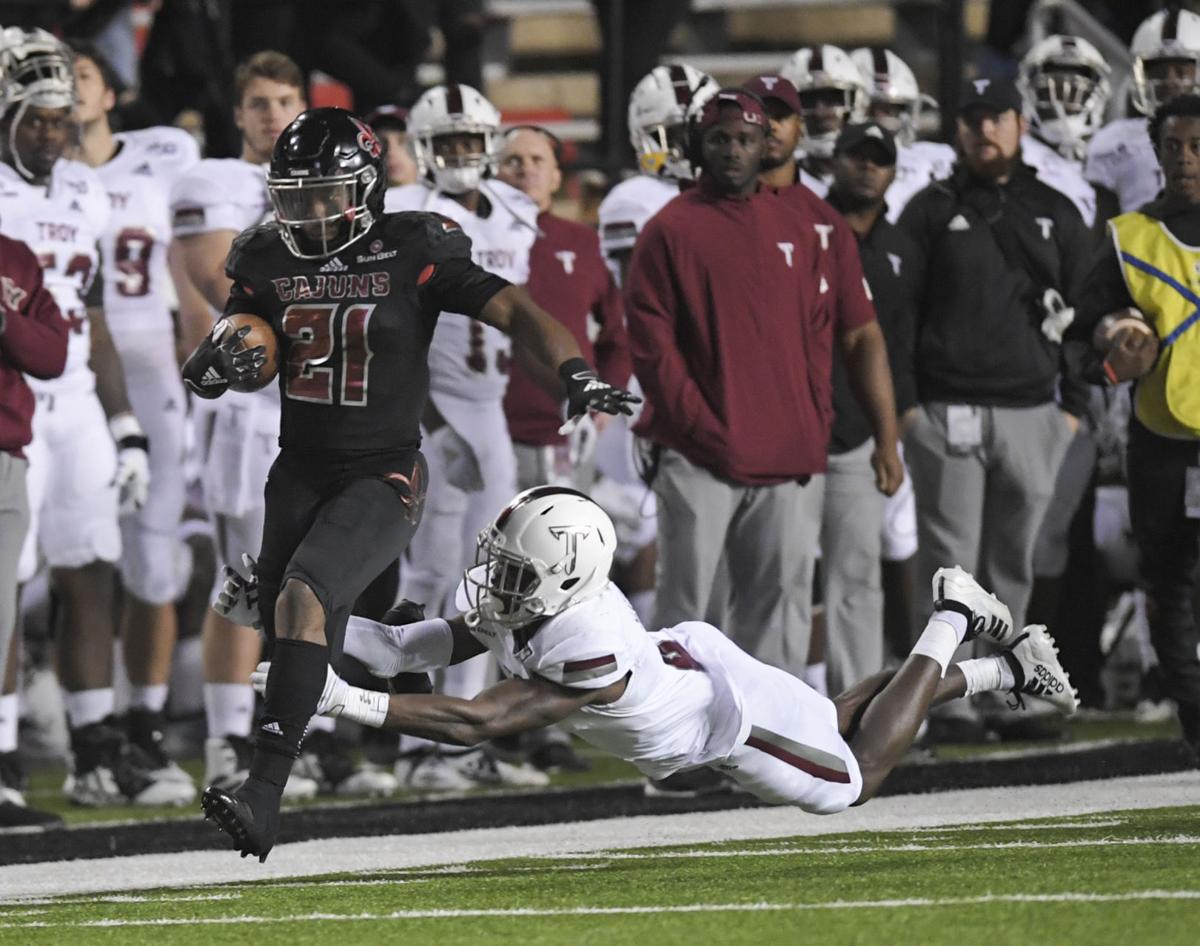 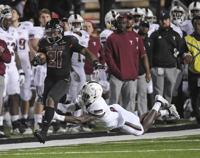 UL running back Chris Smith (21) breaks the tackle of Troy safety Craig Slocum on his way to a 80 yard run and touchdown during their Sun Belt Conference football game at Cajun Field on Saturday, November 23, 2019 in Lafayette, La..

UL running back Trey ragas (9) breaks through the Troy defensive line for a long gain during their Sun Belt Conference football game at Cajun Field on Saturday, November 23, 2019 in Lafayette, La..

UL running back Chris Smith (21) breaks the tackle of Troy safety Craig Slocum on his way to a 80 yard run and touchdown during their Sun Belt Conference football game at Cajun Field on Saturday, November 23, 2019 in Lafayette, La..

In his stops at Alabama, Clemson and Arizona State as an assistant coach and offensive coordinator, Billy Napier’s never been around a football team that played a perfect game.

But he admits his UL squad wasn’t that far away from that unreachable goal on Saturday.

“We played close to a complete game,” Napier said after the Ragin’ Cajuns’ 53-3 destruction of a Troy team that can still finish as high as second in the Sun Belt Conference’s East Division. “Most games come down to fundamentals, they come down to how well you execute what you have planned, and we did that. We did a lot of things well.”

In hindsight, there were several factors leading to UL's annihilation of Troy Trojans

The Cajuns chose a great time for that effort, one that locked up the Sun Belt’s West Division title and put them into a second straight league title game against Appalachian State in two weeks. UL had shown similar performances in its first two November outings, a 31-3 win over Texas State and a 48-7 victory at Coastal Carolina, but last week’s lackluster 37-27 win at South Alabama had raised questions — even among the Cajuns themselves.

“We didn’t play our best ball against South Alabama, everybody saw that, and we kind of took that personally,” sophomore center Shane Vallot said. “We went out last week, practiced hard, stayed focused, and we played our best ball. We had a challenge, Troy has a great offense but our defense came out and played great ball.”

“Each week’s a little different, and you gotta find ways to win lots of different ways,” said Napier, whose team has won nine of its past 10 games. “It’s very rare that you’re emotionally ready to go, the schematic things that you have planned work well, and the players as a group — offense, defense, special teams — are all hitting on all cylinders. Saturday was unique for that.”

Troy coach Chip Lindsey agreed after his team trailed 50-3 just past the mid-point of the third quarter.

“We kind of ran into a buzz saw this week, couldn’t get into a rhythm, and the score showed that,” he said Monday during the Sun Belt’s teleconference. “They absolutely outplayed us in all three phases.”

The Cajuns held a Trojan team that had scored 112 points in its past two games — the second most in the country behind Ohio State — and that was averaging 43 points in Sun Belt play to only a first-quarter field goal. UL’s defense held Troy more than 150 yards under its offensive average, forced three turnovers and held the Sun Belt’s leading passer Kaleb Barker to 178 yards on 15-of-32 completions while sacking him four times — one of them for a third-quarter safety that made it 36-3 and snuffed any Trojan hopes for a comeback.

“We were mad that they put up the three points,” said linebacker Kris Moncrief, who returned from a one-game targeting suspension with four solo tackles and a fumble recovery. “We wanted to get a shutout. We know we can do a lot more to get better.”

Offensively, UL scored points on nine of its 13 possessions and punter Rhys Byrns averaged 48.5 yards on punts at the end of the other four drives. Except for one first-quarter possession that started at its own 42, Troy never started a possession outside its own 30-yard line, and after the field goal the Trojans didn’t take a snap inside UL’s 20 until the final five minutes.

That helped the Cajuns score on seven of eight possessions in the second and third quarters and eventually finish two yards short of a 600-yard offensive night despite quarterback Levi Lewis and the three top running backs not taking a snap after the mid-point of the third quarter.

Saturday’s win locked in the title-game matchup in two weeks with App State for the second straight year, and Troy can do UL a huge favor in the final regular-season weekend. The Trojans host the Mountaineers Friday night, and a Troy victory coupled with a Saturday Cajuns home win over UL-Monroe would make UL the host team for the Dec. 7 conference title game. If App State wins, the Mountaineers would host for a second straight year courtesy of their 17-7 win over UL at Cajun Field back on Oct. 9.

“Who won the game, what’s the score, that’s about it,” Napier said of how much he’ll be following Friday night. “There’s lots of momentum here for us, and there’s an opportunity to continue that momentum and not have a setback. It’s a chance to be a part of a team that wins 10 games, which would be the first time in school history, and that would be a big deal.”

The Cajuns aren’t taking anything for granted in Saturday’s 6:30 p.m. ESPNU-televised contest against the Warhawks, especially since they needed a final-play ULM field goal miss last year to escape with a 31-28 win in Monroe