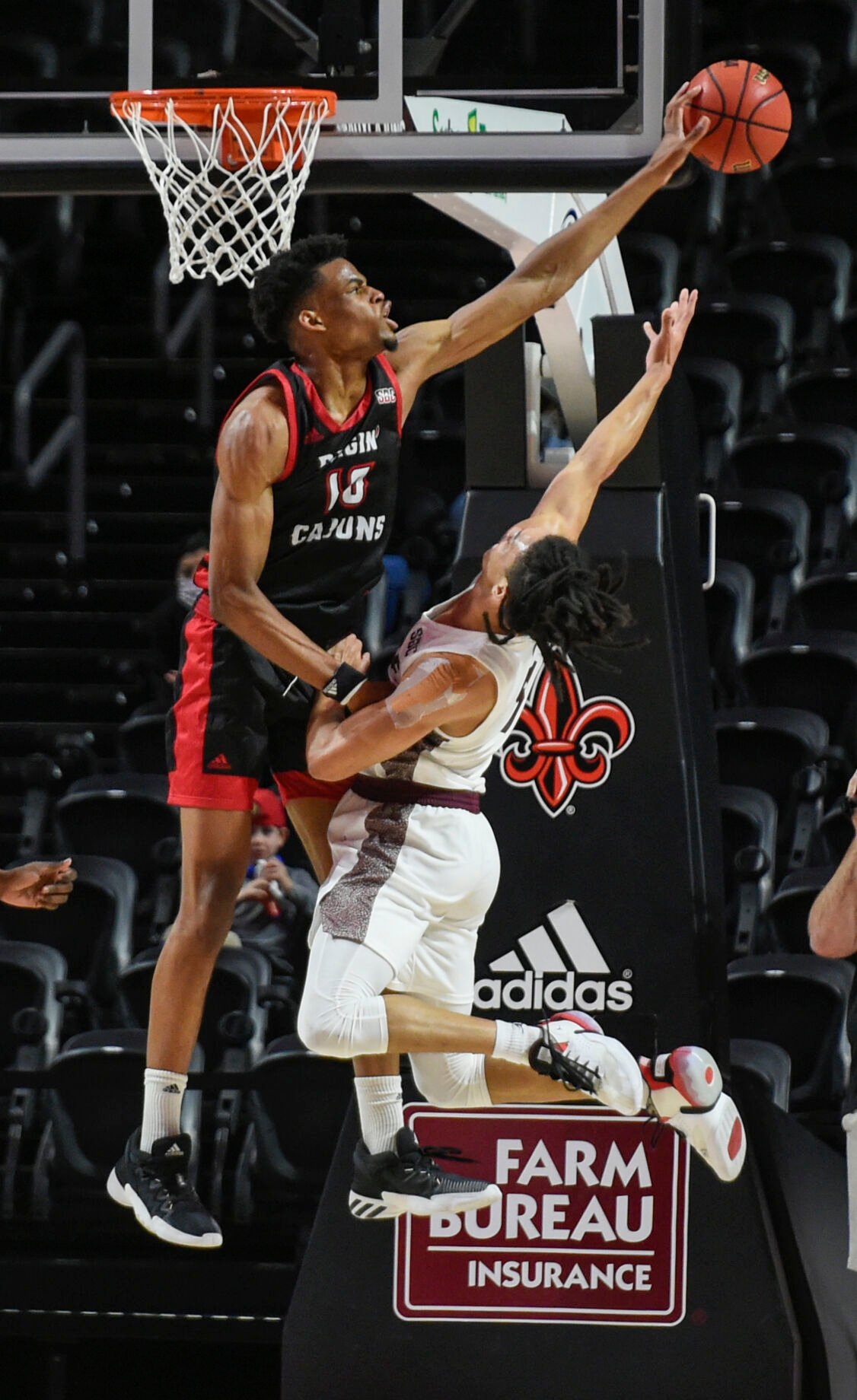 UL forward Theo Akwuba, left, blocks the shot of UALR guard Isaiah Palermo, right, during the Cajuns' overtime loss to the Trojans on Saturday at the Cajundome. 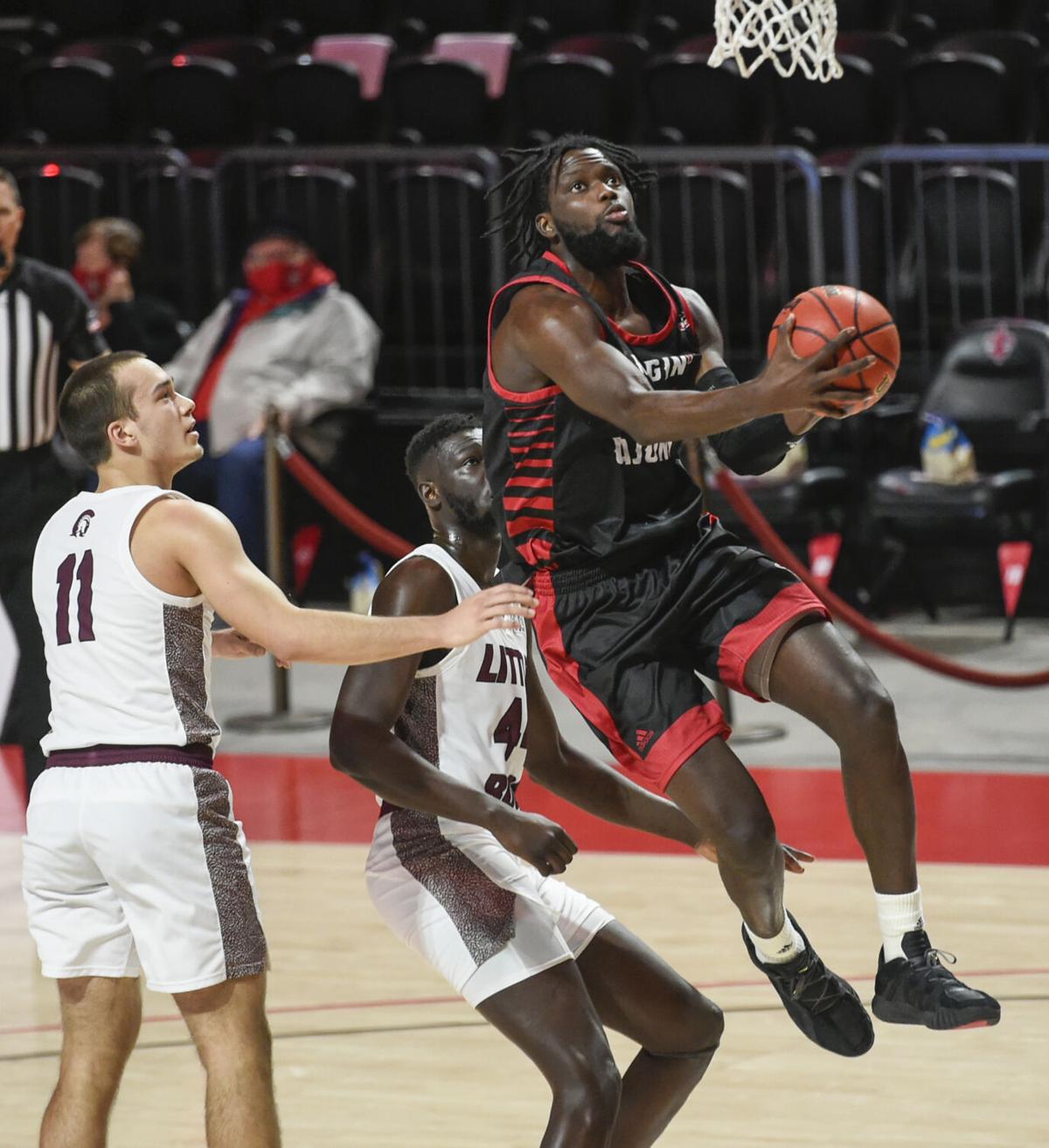 UL forward Dou Gueye (23) drives to the basket against Little Rock defenders Marko Andric (11) and Rout Monyyang (44) during the Cajuns' overtime loss to the Trojans on Saturday at the Cajundome.

UL forward Theo Akwuba, left, blocks the shot of UALR guard Isaiah Palermo, right, during the Cajuns' overtime loss to the Trojans on Saturday at the Cajundome.

UL forward Dou Gueye (23) drives to the basket against Little Rock defenders Marko Andric (11) and Rout Monyyang (44) during the Cajuns' overtime loss to the Trojans on Saturday at the Cajundome.

The UL Ragin’ Cajuns took their turn at heartbreak Saturday at the Cajundome.

On Friday night, Little Rock left the court angry after a two-second lights malfunction interrupted its final possession in a two-point loss to the Cajuns.

In the rematch Saturday, the Cajuns’ critical possession also didn’t go well — throwing the ball away from the halfcourt line on an inbounds pass with 3.1 seconds left trailing by a bucket — in losing a 78-76 decision in overtime to Little Rock.

“Another difficult Saturday game,” UL coach Bob Marlin said. “Disappointed, we played a good first half. That was the best we’ve played. Then the second half, our defense failed us.”

After the errant pass, Kris Bankston was fouled for Little Rock (8-3, 2-2 Sun Belt). He missed both free throws with 2.5 seconds left, but Mylik Wilson’s desperation halfcourt shot was off the mark for the Cajuns (8-3, 2-2).

After a hot-shooting first half, UL finished the game shooting 47% from the field and 42% from 3-point land.

The Cajuns made eight 3-points to only two for the Trojans, but Little Rock outscored UL 22-10 at the free-throw line to gain an edge.

“We changed defenses in the second half to try to pack it in a little bit, but it didn’t help,” Marlin said. “We just fouled them. They got 30 free throws to our 12. That was a big factor in the game also.”

Theo Akwuba led the Cajuns with 17 points and 10 rebounds, along with Cedric Russell also scoring 17 points behind 4-of-7 shooting from 3-point land.

The loss spoiled the best two-game effort thus far this season from Brayan Au, who finished with 11 points on 3-of-4 shooting behind the arc, along with five rebounds and three assists.

“We were trying to get Cedric the ball at the top,” Au said of the final play. “They put the biggest guy on the court (on me), so we wouldn’t see where to throw the ball. So we just threw it straight up to see who would win a 50-50 ball. They got a foul and they missed both free throws.”

UL’s other double-figure scorers were Dou Gueye and Wilson. Gueye had 10 points, five boards and three assists before fouling out with 2:08 left in regulation. Wilson hit two shots late in regulation but finished with 10 points on 3-of-13 shooting from the field.

After a being limited to six points in the first half, Ruot Monyyong led Little Rock with 19 points and 16 rebounds in 39 minutes.

But it was point guard Markquis Nowell who hit the big shots in the win for Little Rock. His three-point play with 42.6 seconds in regulation forced overtime and his 3-pointer with 58.7 seconds in overtime gave the Trojans a 78-74 lead.

Nowell finished with 15 points, four rebounds and three assists after being limited to two points in 26 minutes in Friday’s loss.

“They did a good job (in second half),” Marlin said. “They were aggressive. We were too tight and we let them in the gaps. They got their hands on some balls. We had plays that were fumbled. Balls were fumbled. We threw a couple of pick-sixes that really hurt us. Defensively, they just amped up the pressure a little bit.”

After Friday’s controversial finish, the Cajuns were expected to get a big challenge from the visiting Trojans.

The Cajuns responded to the tall task by enjoying their big half of shooting so far this season. With Russell and Au each making a pair, UL finished the first half shooting 57% overall and 56% on 5-of-9 shooting behind the arc, compared to Little Rock’s 0-of-9 shooting from 3-point land.

Dou Gueye, who missed last weekend’s series against Texas State, also provided a big push for UL by going 5-for-5 from the field to score 10 points in the first half. Two of those buckets were on back-door alley-oop passes from Wilson and Au.

Little Rock’s primary inside threat Nikola Maric was tough to stop in Friday’s win with 18 points on 8-of-13 shooting. On Saturday, though, he only made 3 of 9 attempts for seven points.

Monyyong was the most emotional Trojan in Saturday’s rematch and it didn’t seem to help his game, settling for 1-of-4 shooting and six points in the first half.

A Russell 3-pointer with 38 seconds left helped UL claim the first double-digit lead of the weekend with a 42-32 lead at intermission.

To no one’s surprise, the Trojans came out hot after a rough first half. After UL initially responded to a 4-0 Trojans run to open the second half, Little Rock embarked on a 13-2 run to claim a 51-48 lead with 13:31 left.

Isaiah Palermo, who scored just three points in seven minutes of play in Friday’s loss, played a much bigger role down the stretch in regulation. A six-point run kept Little Rock close at 61-60 with 4:59 left. Palermo finished with 17 points and five rebounds.

The Cajuns led 68-65 with 1:40 left on a Wilson jumper, but Nowell’s three-point play with 42.6 seconds left tied the game and neither team scored again in regulation.